Common perception is that in spite of poverty and under-development, women in South Asia have played a much more active role in leadership and politics of their countries and their communities than in the western “developed” world. Persons like Sirimavo Bhandaranayike, Indira Gandhi, Sheikh Hasina, Benazir Bhutto, Mayawati and Aung San Kyi are responsible for this common perception. Yet, those who know the reality of our world, know that for most women, especially in rural areas, their lives are often closed in the boundaries of traditions, hidden behind veils, bound by rules of caste and class.
India started an experiment in 1993 to change this apparently immutable world of rural women by reserving certain election seats at village council level (Gram Panchayats) for them. At that time, many persons had thought that this would not change anything, men will continue to decide and rule as usual, using their wives or mothers or daughter-in-laws as a cover.
Initially almost all the women who entered the poltical arena because of this policy, were in some way forced by their families. Most of them did not receive any training for the roles they were asked to take on. Almost fifteen years later, it is perhaps time to take stock and understand how this change has worked out in practice and if indeed there has been a change?
Yes, in spite of all the cynicism and active obstruction by old political power-brokers, the experiment has started to bring about a change. “Sarpanch Sahib – Changing the face of India”, edited by Manjima Bhattacharjya (Harper Collins India with India Today and The Hunger Project, 2009), tells the stories of some such women who became presidents of their Gram Panchayats (village councils). 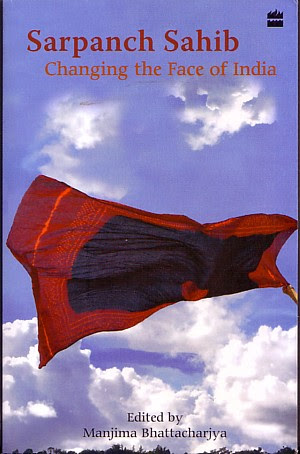 The stories of the book are told by women like Manju Kapur, Indira Maya Ganesh, etc. and are immensely readable. They talk of villages from different parts of India. To understand what these women went through and continue to pass through, what it means for them to live lives of poverty and yet strive for better governance against all odds, makes for a humbling experience.
I liked all the stories. They are succcess stories, even if they show that nothing is easy and at times, the idea of “success” does not quite express what they have achieved. They show that change in the unchanging world of rural poverty, could be almost imperceptible. Like the story of a person like Kenchamma, a dalit woman, who continues to shell betel nuts for a living, even while she is into her second term in the Gram Panchayat. Like this passage from her story:

Quite far removed from the Kenchamma of 1993, who cried in humiliation as she returned from her first meetings, bewildered and frustated at not being able to say anything. We were walking through the village and my eyes fall on her callused hands. She points to the skin of betel nut strewn in piles every where. She did four sacks yesterday. At 50 rupees a box she makes 200 rupees for the day. ...An uneducated Dalit woman has done for her village what seasoned political aspirants have not. But what has she got in return? What does one make of this strange sort of limbo? Thins have changed so much over one generation – from Cariappa’s to his daughter-in-law’s, yet they remain disturbingly unchanged.

Kenchamma has been president of the panchayat twice and is now a grudgingly respected member of the village community – respected by Dailts and Lingayats. But she is still a poor Dalit woman. As if being any other way would be improper. Improper not to live in a thatched, leaking mud hut, or to plaster her house, to not struggle for daily wages, improper to imagine other livelihoods, work not just for the village but make a career out of governance and use the 10 years of hands-on learning she has had. The boundaries have been pushed, but still only from the limits of the home to the village. Isn’t it enough that you have been allowed to reach this far, the voices seem to suggest?

I think that Kenchammas of this world are wise, they know that entrenched social hierarchies can react back with terrible fury if they feel that the status quo is being challenged. They know that they can not count on any one else to protect them. So they bide their time, they accept to continue to living lives of poverty and marginalisation, even while achieving small changes, providing education for their children. They are not aiming for revolutions, they are aiming for a change. Most of us from worlds far away from theirs, including many development experts, are frustrated with this path of slow change.

Perhaps we, or some of us, would have preferred revolutions?
I would recommend this book to everyone, especially those who think that they know India, that they are building the modern new India, that they are bringing in the progress. It would bring a sense of balance in what they think about themselves and gain some respect for those Kanchammas, working in far away places to bring small changes in rural India, taking personal risks that most of us wouldn't have the courage to take.
Posted by Sunil Deepak at 16:40