Eyes well up with hurt, thick lips quiver in pouty indignation, and subtlety is thrown to the hounds as the actress flounders, trapped inside a bewildering character significantly out of her league.. Priyanka tries her best, but is simply not a good enough actress to justify being in a role this nuanced and demanding. It is a fantastic character, one deserving of a Sofia Loren or a Penelope Cruz or a Waheeda Rahman, and try as Ms Chopra might, she never comes close to being convincing. She turns hints into signals, happiness into hysterics, her every movement an act. She looks her best when sternly strutting into a hospital, occasionally gets a line right, and her acting highlight comes with her resigned yet in-control body language as she sees off Annu Kapoor to his car. Yet these are but a few swallows, and she's an actress unworthy of this season.

If I was Priyanka Chopra, and I read a review like this, probably I would look for a hole where I can hide and lick my wounds. And, probably, I won't come out of the hole for along time. Fortunately for her, other film reviewers, though not very happy with the film itself, are not unhappy with her performance. Like Taran Adarsh on Bollywood Hungama who has written:


Always ready to accept challenges in her career [AITRAAZ, YAKEEN, FASHION] and raising the bar with her performances, Priyanka accepts the challenge to portray ages from 21 to 65 in 7 KHOON MAAF. It must've been an arduous task to get the different age-groups right, but she proves her infinite acting potential yet again. Known to be an actress who stays true to every character that she is portraying, Priyanka delivers yet another sparkling, award worthy performance this time. There are several love-making sequences with her husbands and Priyanka has handled those [bold] sequences without inhibitions... Ideally, I would've given a two star rating for this film, but I am going ahead with an extra star for Priyanka Chopra's sterling performance!

Other critics may not be so gushing, but they have liked PC. Here are some more examples of critics' opinions about PC.

Namrata Joshi on her blog on Outlook, writes: "Priyanka, confident but made to age abruptly with bad, patchy makeup... "

Mayank Shekhar on Hindustan Times is happy with her performance, "For Priyanka Chopra, who plays the Anglo-Indian protagonist, this is unquestionably a role of a lifetime. She has you by the eyeballs. So does most of the movie."

Rajeev Masand from IBN is dismissive towards the movie but accepts that PC tries her best, "Priyanka Chopra dives courageously into her role, sacrificing vanity and pride to play Susanna at different ages of her life and in often humiliating conditions."

Appreciating art, like the person you fall in love with, and probably like pretty much else in life, is something unexplicable, irrational. Therefore, even if the whole world including the professors of Pune Film and TV Insitute, give a gold medal to PC for her work in 7 Khoon Maaf, I think Raja Sen has every right to continue to feel that PC was not just good enough in the movie.

However, it made me reflect about the press coverage all famous actors and directors, sooner or later get and how they deal with it. For example, I remember reading some terrible stories about Rani Mukherjee some years ago. I also remember some of the reviews about Abhishekh Bacchan in Raavan and about Akshay Kumar in Chandni Chowk to China. Actually when they are praising you most, they are also getting ready to pull you down most brutally. Thinking of all the adulation Aamir Khan has received over past few years, I am just waiting to read the kind of bad press he is going to get, the day one of his movie is unsuccessful, how he doesn't understand movie-making, etc. 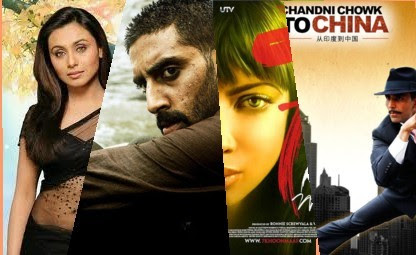 Everybody knows that movie business is a savage business. The industry forgets you, the day you stop selling. When that happens, film journalists are waiting, ready to pounce on you and sink their teeth in your flesh. The more successful you were, more vicious will be their attacks.


Of course it is not something new. Romans had the colosseum where you had to fight it out with the lions and talibans have public executions where you can take a stone and smash a person's head. All societies have such ways of public fun. We have our actors and directors.

However, I was wondering, how do these actors and directors deal with these kind of stories or reviews? Working in films is considered as glamour, with thousands (or is it millions) of hopefuls dreaming on the sidelines to become famous.  But I think that it must be incredibly stressful.

A big high profile film coming out seems to me like a Board examination. Actually it is worse than that, as there will be different marksheets about the same work. Even if some give you a gold medal, there will be others that will fail you.

How would you deal with it? I can't imagine myself putting in months of hard work and then put myself with my butt in the air, so that critics can do their knife throwing practice on me, carving out rump steaks, if they so desire.

In my office, if I give judgements like this on my colleagues or subordinates, probably I will be hauled before a labour tribunal and told to pay damages. You are suppose to respect human dignity of your fellow workers. Even film critics must be asking for dignified treatment from their bosses and their colleagues, where they work. But all these rules don't apply to public figures and artists, who can be mocked at will, their work can be laughed at.

The more vicious you are in criticising, more people will come to read you. For all the frustrations of our lives, we need to see persons who can be kicked at till they bleed. If they are richer, more famous and more beautiful/handsome than us, the better we feel.

So perhaps the trick is not to take it too personally! That review is not about you. It is about us. Just chill and enjoy your fame while it lasts.