Playing dead in a cemetery

I was a little taken aback when Virginia had asked me if I wanted to be part of her special art installation in the antique Certosa cemetery of Bologna (Italy).

I was only needed to play dead in a special picture and then to share my ideas about "what do you think happens when we die?".

I love Certosa (the initial "C" is pronounced like the "ch" in church) cemetery. It has been a burying place for the dead for more than two thousand years. First it was an Etruscan cemetery, and then a Roman cemetery, and then over the past fifteen hundred years, as Bologna changed from a settlement and assumed the form of a city, Certosa has slowly grown bigger.

In the medieval period (1300-1500 DC), people started making there monumental graves with sculptures. Therefore, many areas of Certosa are like an open air museum, with hundreds of statues. The most common theme in this museum, as you can guess, is bereavement, with statues evoking feelings of loss, sadness and crying. However, there are many statues on the tombs of big and famous persons, that are more about power, wealth and vanity. 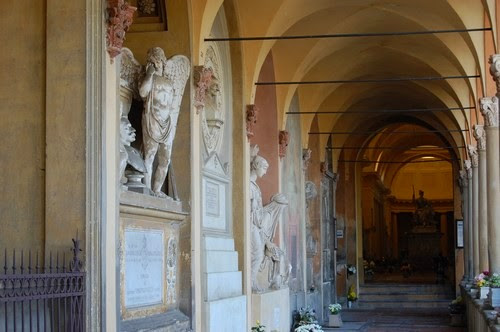 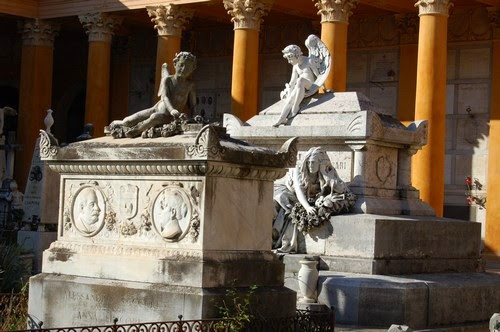 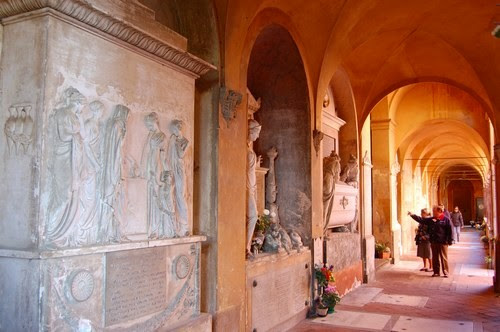 Surrounded by verdant hills, some parts of the cemetery have lovely views. Over the last two decades, cremation rather than putting the dead persons in graves, has also become more common. They even have an open grassland, where those who do not wish for a grave or an urn, can scatter the ashes. 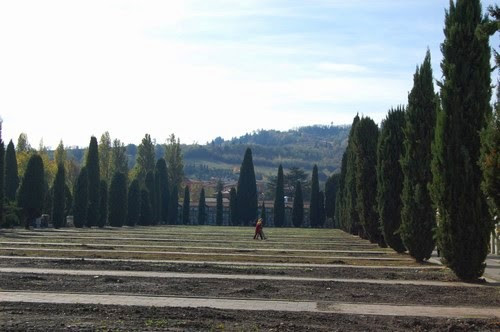 In today's culture, where emphasis is on enjoying life, normally people do not want to talk or think about death. It was not always like this. For example think of the huge tombs built by Egyptian kings for their own burial, because they were worried about their afterlife, and wanted to make sure that they could continue to live as kings after their death.

Most of us have difficulties in talking about death and bereavement. Amitav Ghosh in a beautiful article about the death of his friend Agha Shahid had written in 2001:

Although Shahid and I had talked a great deal over the last many
weeks, I had never before heard him touch on the subject of death. I did
not know how to respond: his voice was completely at odds with the content
of what he had just said, light to the point of jocularity. I mumbled
something innocuous: “No Shahid—of course not. You’ll be fine.” He
cut me short. In a tone of voice that was at once quizzical and direct, he
said: “When it happens I hope you’ll write something about me.”
I was shocked into silence and a long moment passed before I could
bring myself to say the things that people say on such occasions: “Shahid
you’ll be fine; you have to be strong …”

Shahid ignored my reassurances. He began to laugh and it was then
that I realized that he was dead serious. I understood that he was
entrusting me with a quite specific charge: he wanted me to remember
him not through the spoken recitatives of memory and friendship, but
through the written word. Shahid knew all too well that for those writers
for whom things become real only in the process of writing, there is an
inbuilt resistance to dealing with loss and bereavement. He knew that my
instincts would have led me to search for reasons to avoid writing about
his death: I would have told myself that I was not a poet; that our friendship
was of recent date; that there were many others who knew him much
better and would be writing from greater understanding and knowledge.
All this Shahid had guessed and he had decided to shut off those routes
while there was still time.

“You must write about me.”

We have an old dog and often I am worried that one day he will be gone. Also, when you cross fifty, I think that consciously or unconsciously, you begin to ask yourself, how many years you still have to live. So I think about death off and on for some time now.

I had visited Certosa many times and had already expressed my thoughts to my wife that when I die, I would like to be cremated and I would like my ashes to be scattered in the Certosa open grassland area. Therefore when Virginia asked me to be part of her art installation on death, I didn't think twice and immediately agreed. However, some of my friends were not so sure if it was a good idea.

"Won't it be inauspicious to have your picture there while living? It is only dead persons' pictures that are put there?", they worried.

Virginia had a special technique for taking pictures, so that it looked as if the person was coming out of darkness. She took pictures both with persons' eyes open and with eyes closed. "I won't take off my glasses", was my only condition. I know that dead don't need eye glasses, but what fun is to play dead, when no one recognises your picture because you are without your glasses?

I also spoke to Virginia about my views about death, influenced mainly by Hinduism, though not in the sense of paradise or hell:

I like the way death is described in Kenopanishad and Kathopanishad. I think that everything in the universe is pervaded by the same consciousness, and when we die, our individual consciousness goes back to all pervading consciousness, like a river goes in to the ocean. That all mountains, plants, animals and humans are inter-connected through this consciousness.

I think that everything in this physical universe is made of molecules, atoms and sub-atomic particles and these particles are exactly the same in every thing. Thus, all persons, animals, birds, plants, rocks are made of same building blocks, but our level of consciousness energy is different.

I like the understanding coming from quantum physics that at sub-atomic level, a particle can be in many places at the same time and that between the particles there are huge spaces, so much that relatively, the distances between the constantly dancing sub-atomic particles inside each atom that compose us, are like the distances between the planets. Therefore, each particle of our bodies, is like a solar system. I think that this describes the concept of Maya that Upanishads talk about.

The art installation was set up an underground hall from 14th century. Along the 700 hundred year old tombs, there were our images on the walls. We were 12 persons representing 12 different religions and cultures. We all spoke our views about death in our languages. People could also read our views. 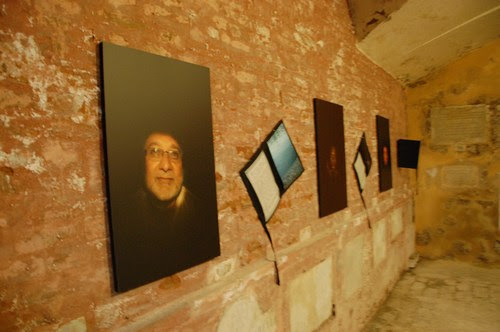 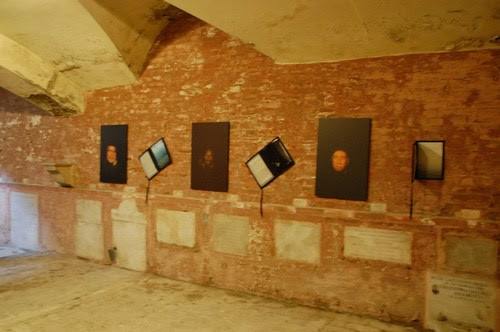 It was a wonderful sensorial experience. And, there was enormous diversity in our views about death. Virginia says that this multi-media art work was very inspiring for her. Now she is planning to involve even more persons and one day come out with a book about it.

Are you comfortable talking about death? What do you think happens when we die? Do you believe in reincarnation? Would you accept to be part of an exhibition, where you are shown as dead?