I think that for some persons, photography can be a way to come in contact with deeper part of themselves. It can be similar to what other persons try to achieve with deep meditation. At least on me photography has that effect.

Jill Bolte Taylor, the Harvard neuroscientist has this wonderful TED video talk that she made in March 2008, where she told about her stroke experience ten years earlier and how it made her understand the complementary and yet different ways in which the two sides of the human brain work.

Jill had a cerebro-vascular problem - a blood clot on the left side of her brain. It happened slowly over a period of a few hours. While that was occuring, there was some moments when she was conscious and could think coherently, and there were other moments, when she knew that she was not in control and her brain was working in a different way. From that experience she came to think certain ideas about how the left and right parts of our brains work.

Jills says that the left side of our brain functions with words, voices, thoughts and logic. It makes plans, thinks of the past and the future, it studies and understands the world, rationally and logically. It is also the part of the brain that looks at "I" and the "rest of the world", it is about our egos, our needs, and makes us the individual human beings that we are.

Normally, left side of brain dominates in most of us. It is this part of brain that keeps on "thinking and talking" in our heads all the time. It is very difficult to stop it from "making the thoughts noise". And it covers and hides the input from the right side of our brain, it does not allow us to feel the world from the right side.

Thus, talking about her experience, as the blood clot formed in the left side of Jill's brain, there were moments when the control of the mind from the left brain was interrupted and she could feel the world from the right side of her brain. In those moments she felt her thoughts become silent. There were no more continuous thoughts filling her head. Instead, she felt filled with bliss. The boundaries between her body and the rest of the world, like the walls of her bathroom, disappeared, so that "she could not see where was her arm and where was the wall of the bathroom. It was all one, a continuous one."

When I heard Jill explain it, I thought that this experience sounded very similar to some experiences of meditation that I had heard and read about.

I had tried meditation many times.

I see myself in this description of Jill, as a person very strongly controlled by my left brain. Always planning, thinking about all kinds of things, with a voice going on talking all the time inside my head.

And, I think that with age, this left-brain domination, the desire to plan and be rational, has become stronger. I think that as a child, when I had greater interest in paintings and designing, I was less obsessed with details and plans. Then probably my studies in medical college and my profession pushed me deeper into the rational logical world of the left brain.

A couple of decades ago, I went to a meditation class for the first time. A priest had come to Italy from Varanasi and was conducting meditation classes. He explained to me about meditation techniques by focusing the mind on my breathing or on a central point in my forehead or on the image of a god.

"You have to become silent, stop the incessant thoughts in your head", he had said.

I tried but I never really managed to stop the voices in my head. I could never feel meditation, in the sense of "stopping my thoughts and focusing them on nothingness". Often, when I tried to meditate, I ended up feeling frustrated. Once I decided that I couldn't do meditation sitting up and I had to lie down to meditate. After that every time, I tried to meditate, I drifted off to sleep. Finally I had concluded that I was destined to never really experience the feelings of meditation.

And then 5-6 years ago I discovered photography.

I bought my first digital camera in 2005. The 1 Gigabyte memory card freed me from worrying about number of pictures I could click. I clicked pictures all the time and every where. It was a kodak camera with a preview screen, so I held the camera in front of me and clicked images all the time.

When this kodak camera was stolen in Ecuador in August 2005, it was not the financial loss that mattered to me, but the enormous emptiness of not clicking pictures. I immediately bought another kodak digital camera.

In 2009, I bought my first SLR camera with a 4 Giga memory card, suddenly the whole expereince changed. It was a low end SLR (Nikon D 40) in which there was no preview  of the images on the screen and I had to put my eye in the viewfinder to see what I wanted to photograph.

As I start taking pictures, slowly I can see my brain changing gears. I start focusing on small things.

Textures, colours and details that are normally a blur, that hardly register in my head normally, they all come into focus. I can see the rough bark of the trees, the intricate patterns on its surface and the subtle variations in the colours. The insects buzzing over the flowers, the shades of green in the grass, the different shapes of flowers, the angles of people's smiles, the way light skids off their faces, the wrinkles on the corners of their eyes. As I click pictures, life rushing past, slows down.

And when I stop clicking for some time, the life continues to flow slowly.

Does it make any sense to you? Or do you think that I have gone bonkers? Actually I don't think it matters. It makes sense to me and that is all that really matters. I can understand that once again I am trying to make a logical sense of my feelings about photography.

It is my left brain that wants to understand why I feel the way I do about taking pictures. Understanding it is important for me, because it makes me understand its value to me.

BTW, if you have not seen Jill Bolte Taylor's talk on TED, watch it now, it is truely wonderful.

To celebrate, here are a few images I took yesterday evening at Durga Puja and today morning at a canal near our home. 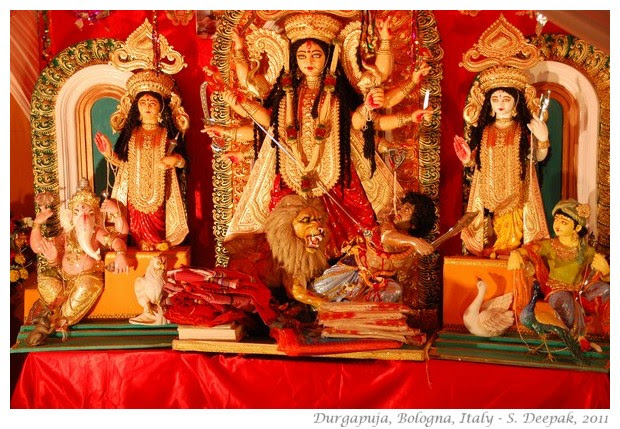 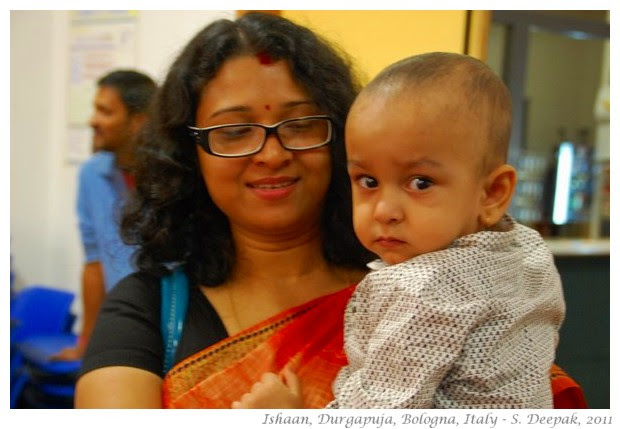 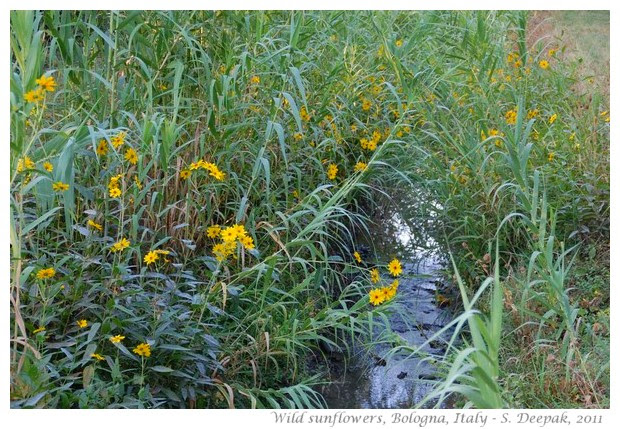 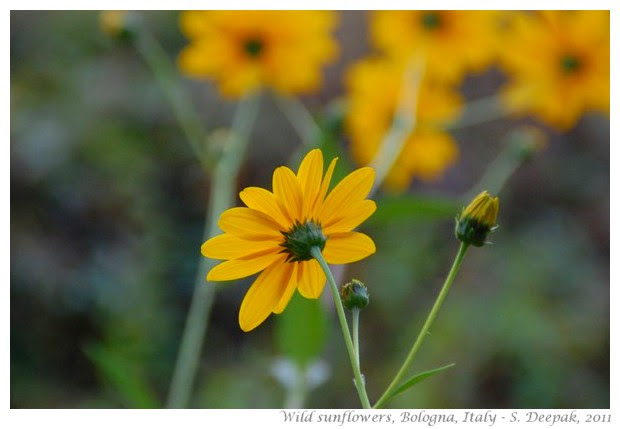 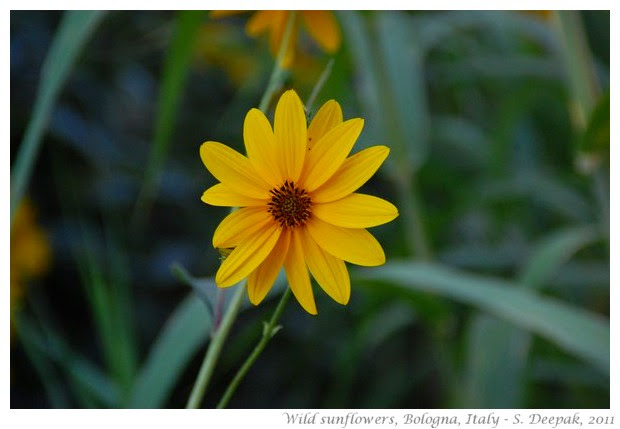 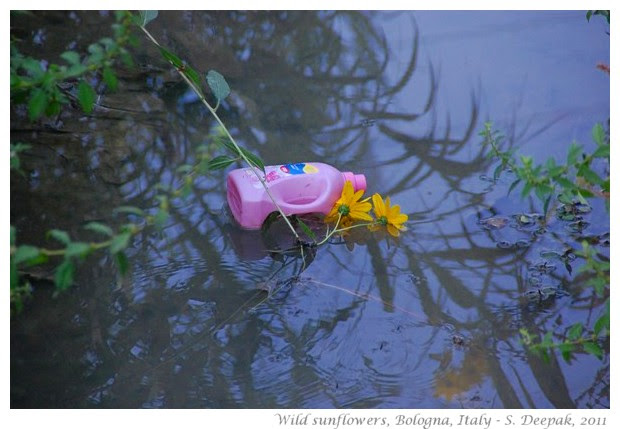