As part of "Divergenti - International Film Festival on Trans-sexual issues" held in Bologna (Italy) in May 2013, a workshop was organized on how media reports about trans-sexual issues and to provide some guidance about how issues related to trans-sexual people can be communicated.

The workshop had two main speakers from the UK based Trans Media Watch - www.transmediawatch.org - Helen Belcher (director of TMW) and Jane Fae, a British journalist. 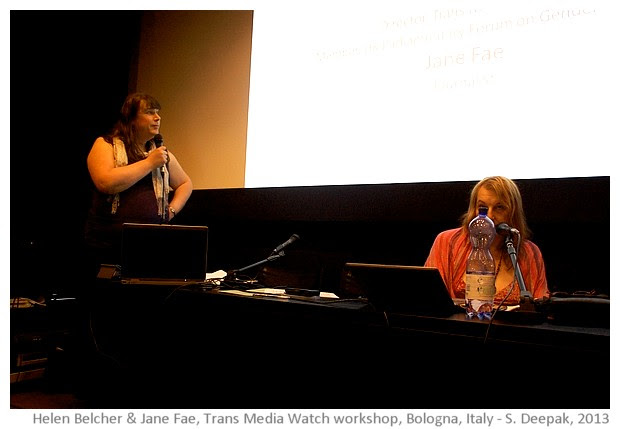 Trans-sexual people every where are usually surrounded by misconceptions. In India, where I grew up, there is little real knowledge about trans-sexual persons known as Hijra or Khusra or Kinnar, though they have a well defined derogatory social role - to come and ask for alms during auspicious occasions (marriages, child birth, festivals). According to the popular perception, they also work as sex-workers. In the every day reality, they are ostracised and discriminated in a vicious manner, at all levels.

Gender is about being a man or woman, and behaving as a man or a woman. It is about male and female identities of persons. 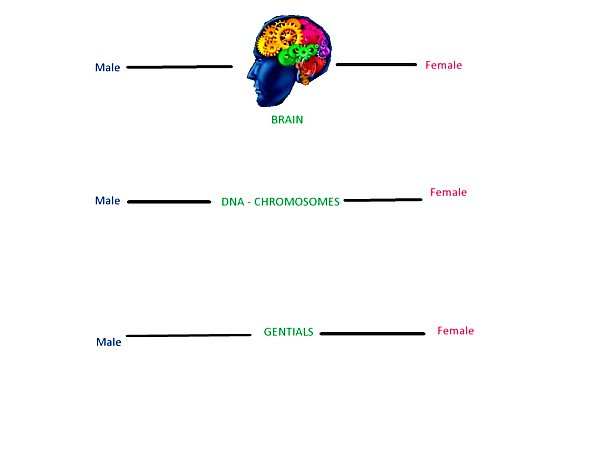 External genitals can be completely male or female or they can have some mixed characters (inter-sexual).
In terms of chromosomes, males have XY sex chromosomes, female have XX chromosomes, while some persons can have different configuration such as XXY.

At the brain level or emotional level, persons can feel male or female, even if their genitals or chromosomes may not match these feelings. Most persons can recognise a male and female parts in themselves.

Trans-sexual persons have always existed in the history, though only in the past few decades, they have been able to come out in public and ask for their human rights.

Historically, the issue of trans-sexuality was treated as a mental health issue and has been medicalized, called as "gender identity disorder". There have been debates if it has a biological origin.

To be a transgender person is not a choice

All of us go through a continuous and unrelenting conditioning from early childhood that construct our identities in terms of boyness and girlness. To question that conditioning is difficult and transition (the process of changing gender) is a process that does not ever end. Some people believe that just because you have had a surgical operation, you have changed gender and your transition is complete, that is not true. Transition is a process, where you challenge that childhood conditioning every day.

The word trans-gender is an umbrella term. There are many other related terms such as cross-dresser, gender variant, trans-sexual, poly-gender, drag queen or drag king, transvestite, etc. Some of these words have different definitions, their boundaries are fluid and keep on changing. These identities are dynamic, their precise meanings can keep on changing at different points in the lives of persons.

Often people confuse between the transgender issues and issues related to sexual orientation. Helen Belcher explained it very clearly when she said, "Gender is about who you feel to be, a man or a woman. Sexual orientation is about with whom do you wish to have sex."

These are just some of the idea presented by Helen in the workshop. Persons working the media, like everyone else in the public, also have the same misconcpetions and stereotypes about trans-gender persons and by writing about these issues in a particular way, amplify those ideas and make them more universal. Thus, it is important that media-persons can have a dialogue with and understand the different issues linked to trans-gender persons.