I was in Rome for a meeting that was supposed to finish around 4 PM. Since these days the sun sets around 5.15 PM, it meant that I was going to have about one hour of daylight for visiting some places after finishing my work and before taking the train back home.

Rome is one of my favourite cities. Almost every stone that you bump against in Rome, has usually a history of at least thousand years. So every time that I can, usually I try to visit some new place in the city.

There are certain parts of the city centre in Rome that go from Piazza del Popolo through Spanish steps and fountain of Trevi to Piazza Navona and Fatherland's Alter, that I can visit every day without getting tired.

I am also a bit quirky, in the sense that I usually set myself some rules when I visit a city. Sometimes, these rules are linked to photography - like when I decide to focus on a particular colour, and wherever I see that colour, I click its pictures. On this visit, my rule was - No transport, only walking.

So, come and join me on this tour to some parts of Rome, the eternal city.

***
The map below shows my tour-route in Rome. The part in blue is my walk in the morning for going to the meeting. The part in red is my visit to the city after the meeting. I think that altogether, in this tour I walked for about 10 km. 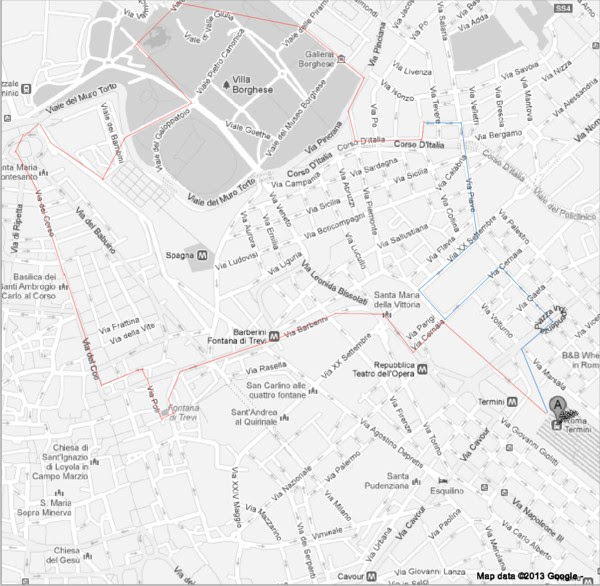 ***
The high speed train from Bologna to Rome took a little more 2 hours. When I arrived in Rome, it was 9.15 AM. My meeting was going to start at 9.30, so I walked briskly, turning right from the station and then taking Via Goito.

Though it is a relatively new residential area, without many historical buildings, still I like to keep my eyes open to look for any interesting places that may be hidden on the way. Like the statues and old church in via Cernaia. I could not resist the temptation to look at those statues. It made my walk a little longer. 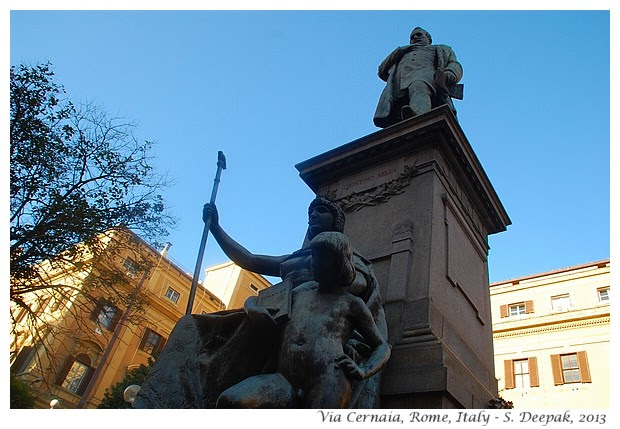 On Via XX settembre, a busy street, I was surprised to find orange trees full of fruits. In Europe, often people don't pluck fruit from trees along the roads, preferring to leave them to rot. However, with all the beggars and immigrants in Rome, it was surprising that those trees had so much fruit! 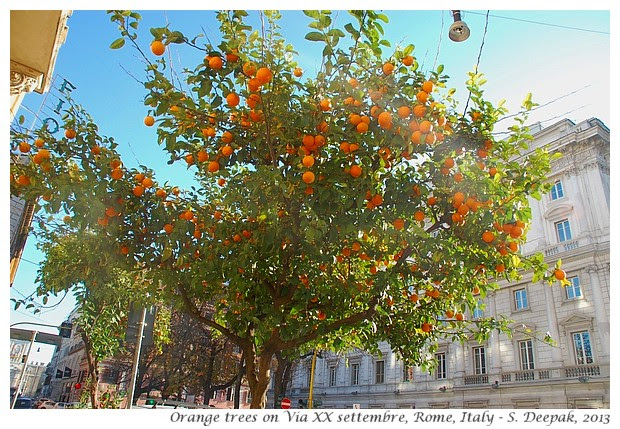 In Fiume square, I saw an interesting looking old building. It seemed to be from 15th or 16th century. However, there was no time to stand and look at it properly as I was running a little late for my meeting. 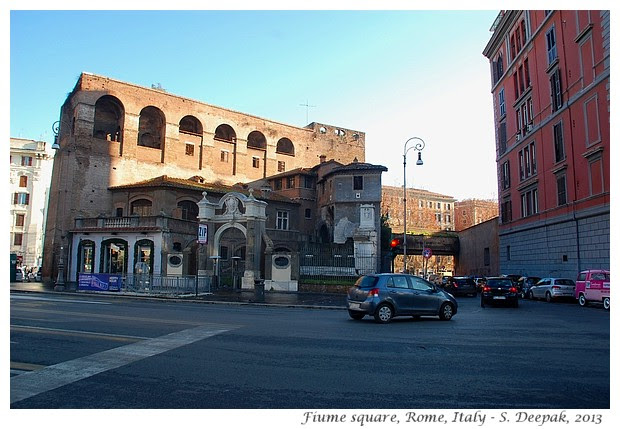 After the meeting, I quickly walked to Villa Borghese museum, determined to take advantage of every remaining minute of daylight. Villa Borghese is a 16th century building from noble Roman family. It is surrounded by acres of beautiful parks, full of things to see including some lakes and many statues. 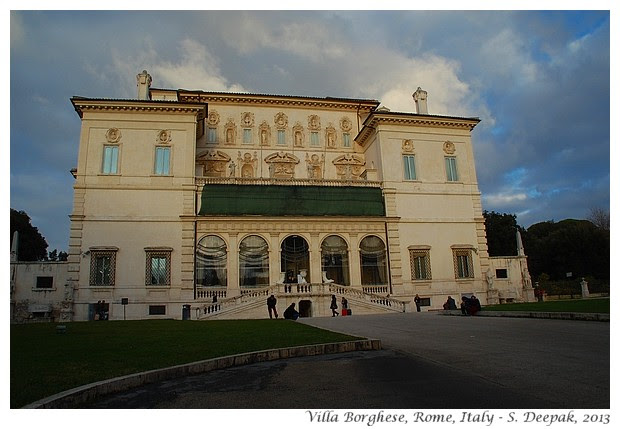 The splendour of Borghese family led to the use of the word "borghese" (bourgeois) as a synonym decadent life-styles of the rich, used frequently by communist ideologues all over the world.

There was no time to visit the art museum or the zoo that are located in the gardens of Villa Borghese. It was nice to walk in the middle of grassy meadows where children were playing and dog owners were out for their evening walks. I looked around for any statues, fountains and interesting buildings. 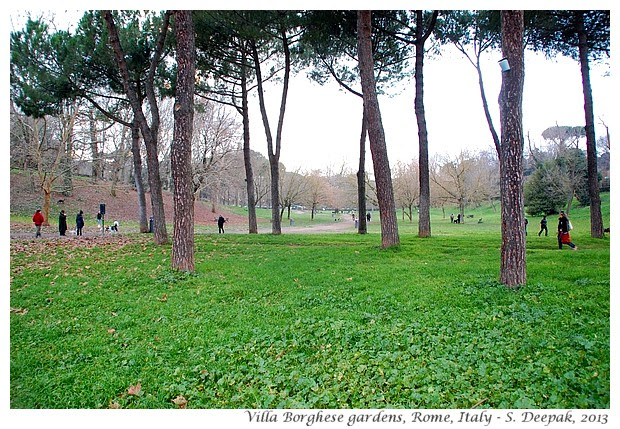 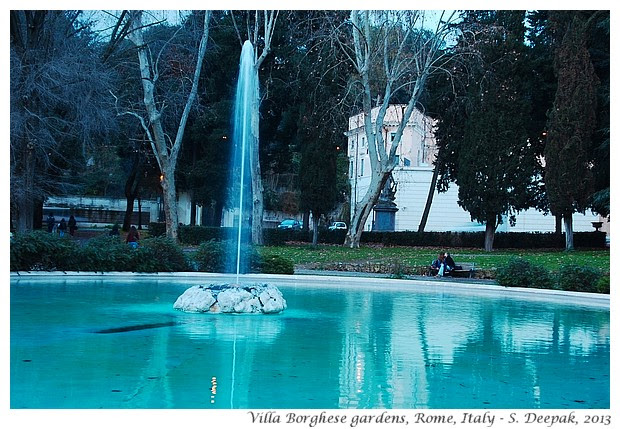 The evening darkness was not very helpful, but still I clicked a lot of pictures, that will be useful for my photoblog in the coming days!

By the time I arrived at the Pincio terrace (pronounced Pinchio), overlooking the Popolo square, sun was almost down and lights had come on. There was a beautiful sculpture exhibition by Mexican artist Javier Marìn on the terrace. It included giant sculptures of terracotta heads and wonderful statues of horsemen on top of columns. The view of the dome of St. Peter's church, seen through the sculptures of Marìn was incredibly beautiful. 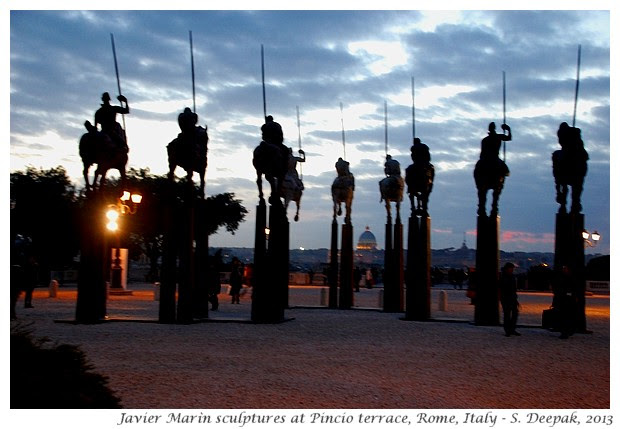 I was mesmerized by those sculptures and the views from the terrace. So I spent a lot of time gazing around and clicking pictures. Finally I climbed down the hill to the Popolo square. The Egyptian obelisk with fountains and the statues on the sides of the Popolo square, glowing in the evening lights, looked like a set from Benhur or Ten Commandments. 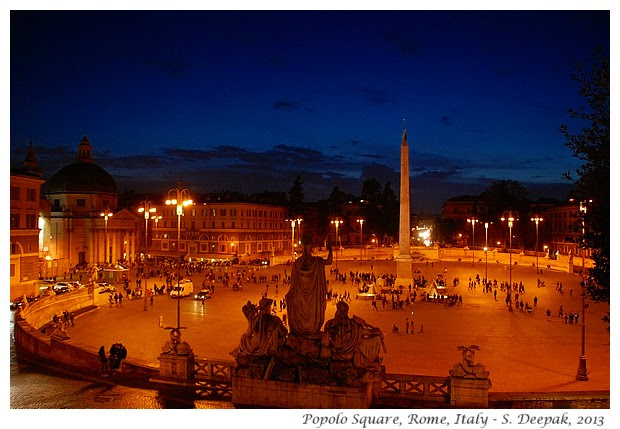 After spending some time admiring the Popolo square, I finally took Via del Corso to S. Silvestro square. Via del Corso was full of people, which surprised me. It is true that it was a Saturday evening and Via del Corso is a traffic-free street, so crowds were bound to be there. Still I was not expecting it to be so packed with people.

Outside a church on Via del Corso I saw a young woman asking money to people. Though she was begging, she had her dignity. She had her own folding chair on which she sat primly with a bottle of mineral water, to ask for money. It made me smile.

I had already been walking for almost three hours and my feet were starting to hurt. So I sat down in S. Silvestro square and rested for a few minutes. 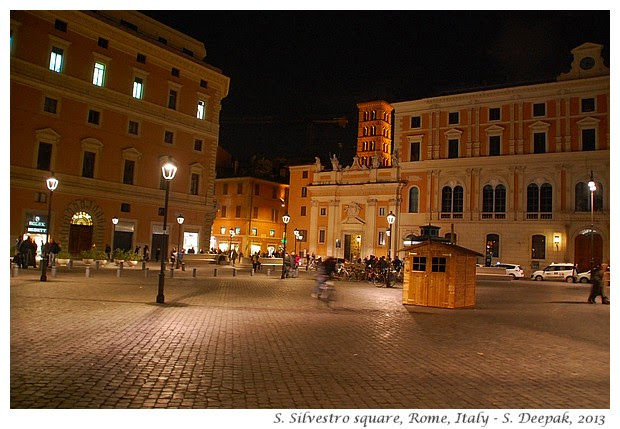 A short walk from S. Silvestro square brought me to Trevi fountain, my favourite place in Rome. The only time, I manage to find this place without too many tourists is very early in the morning. This time it was evening and it was full of people. 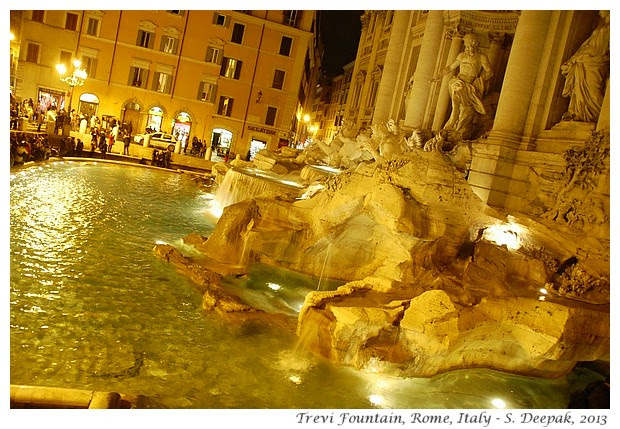 By now my feet were hurting seriously and I was tempted to take the metro to finish the last part of my Rome walk. Somehow I resisted the temptation and took Via Barberini. When I reached Repubblica square, I was glad that I had not taken the metro, because with lights, the central fountain was absolutely wonderful. 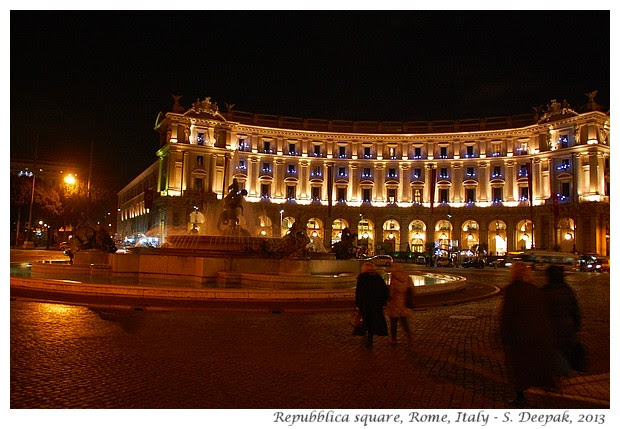 I reached the Termini railway station just in time for my train. My feet were almost numb with pain, so it was a relief to sit down in the train and put up my feet on the foot rest. It had been a long day, but I was very satisfied with my Rome walk.

I have another meeting later this month in Rome, and I am already making plans for other places to see during my next visit.
***
Posted by Sunil Deepak at 11:34