Looking for Karl Marx - A day in London

When I heard that Karl Marx's grave is in London, I was very surprised. Poor Marx. Wonder, how he feels surrounded by all the testosterone driven city yuppies the world capital of free market and globalisation.
I had reached London on 8th July afternoon. After I finished my meeting in Euston, I decided to take the underground to Archway and walk to highgate London cemetery, to take a look at old friend Marx's grave.
This time, I had decided to ignore the weather predictions on BBC. Everytime, they say it is going to rain and I carry an umbrella with me, I find a sunny London. So this time, it did decide to rain. The way to highgate rises on a steep hill, it is supposed to be the highest spot in London, so soon I was breathless and more than a little wet.
Finally when I did reach the cemetery, I found that it was closed. In spite of all their claims about London being the financial hub of the world, free markets and all, so many places continue to observe the office times, from 10 AM to 5 PM. I guess, even the cemetery workers need to go out and enjoy the long summer evenings and visiters can very well take a leave if they wish to visit their dead.
So after all my efforts, in the end I could just take a picture of the entrance of the cemetery, that has a sign that no videos and pictures can be taken inside. However, the walk back to Archway was downhill and much more easier, and it was not raining anymore. 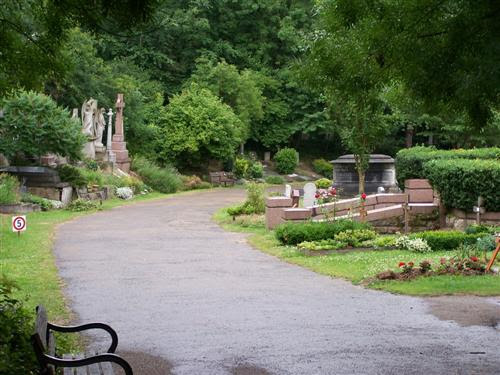 I took the underground to Leicester square, where I was supposed to change to the Piccadilly line. In spite of the cold and wind, it was too early to go back to the hotel, so I decided to walk around Leicester square. The London rickshaws with Savanna ads painted over them, outside the Leicester underground station, looked kind of cute. 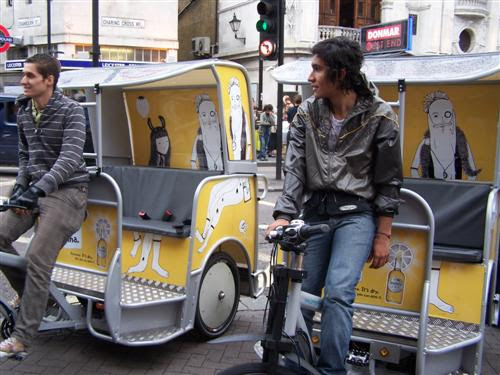 However, like the Highgate cemetery, even in Leicester square, teeming with tourists, the park in the middle of the square was already closed. With the summer and the sunlight till 9 PM, it seems funny that parks are closed when people come out of the offices. In the park, I could see a small black that looked like Charlie Chaplin, so I decided to take a picture of the park with the zoom. 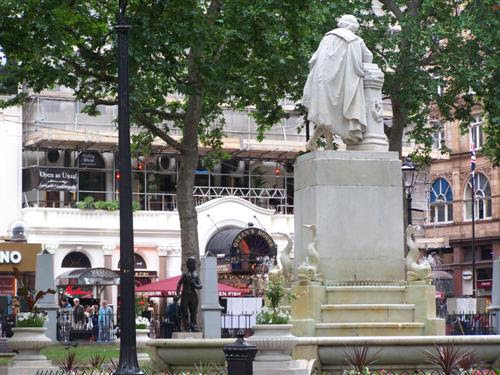 Then, I walked over to the Trafalgar square. The fourth statueless plinth in Trafalgar square is hosting "living sculptures" by Antony Gormley these days. The concept of this initiative is interesting. Starting from 6 July, a new person will get a place for one hour on the plinth to be a living sculpture and persons will keep on changing every day, 24 hours, till October. A total of 2400 persons are expected to participate in this very inclusive art event and anyone can apply through a website. This website also has a live webcam of the plinth.
When I arrived in Trafalgar square, a lady dressed in red was trying to set up a playing card statue, but with strong wind, the cards were refusing to stay in position and some of them flew off the plinth into the safety net and in the square. 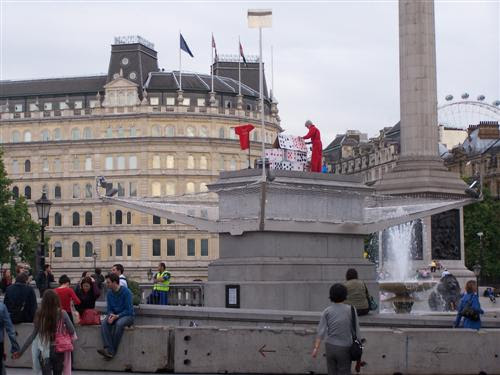 While walking around in the square, near one of those statues sprouting water into the fountain, I heard an Indian father tell his young son in Hindi, "Beta dekho, woh baccha kulli kar raha hai" (Son, look that child is gargling).
Yuck! I didn't want to go near the kulli-water anymore. 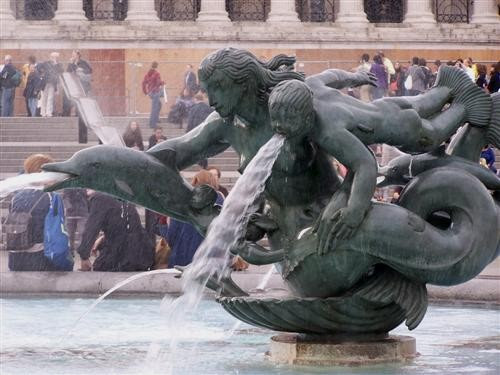 By that time, there was some commotion near the fourth plinth. It seemed that the next participant who was supposed to go up as a living sculpture, had not arrived. Finally Sandy Nairne, director of National Portrait gallery, went up as a substitute and sat there sketching something. 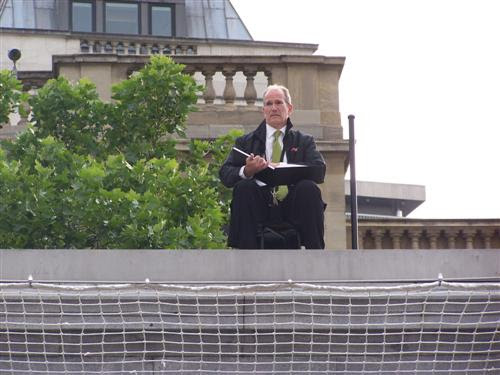 From Trafalgar square, I walked towards Piccadilly, where as usual, hordes of tourists were sitting around the Mercury statue, that always reminds me of the god of love, Kamdev, from Indian mythology. 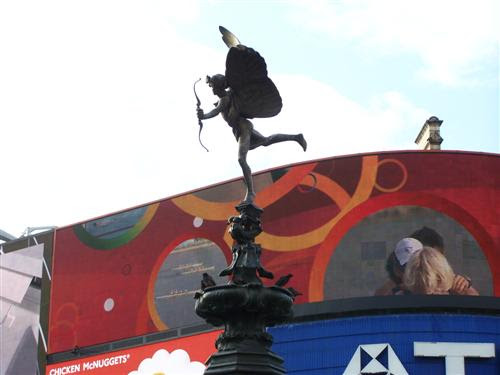 Tired from all the walking, finally I decided to go back to the hotel.
On 9th July, I had an early morning meeting with a French-Italian friend, who is married to an Indian. For our breakfast we went to a small Italian place in one of the small streets near Euston. The place had old pictures of Sorrento, but none there spoke any Italian. Perhaps the original Italian place was bought over by someone else?
I had to go to another meeting near Russel square and there was some time for that, I decided to walk, pulling my suitcase trolley behind me.
When we finished with the meeting, I thought that I could spend a couple of hours in the British museum nearby, as they are having different exhibitions and events linked to India under the Indian Summer initiative. However, the guard at the museum told me that my suitcase was too big for the cloakroom and so he couldn't allow me to enter.
Again I walked back to Euston to kill some time and then took the underground to Victoria. Since it was cloudy and windy, so walking was good fun (after a month in the buring 42 degrees of Delhi, my evident joy at clouds and wind is easy to understand, though most of my European friends are a little perplexed by it).
I still had four hours for my flight back to Italy, so decided to walk to Buckingham palace from Victoria station.
The buildings around Victoria station have a mix of old and new architecture. The golden coloured statue on the old Victoria theater looks strange against the ugly looking high rise building, but some other glass buildings made for much better contrast against the old British architecture. 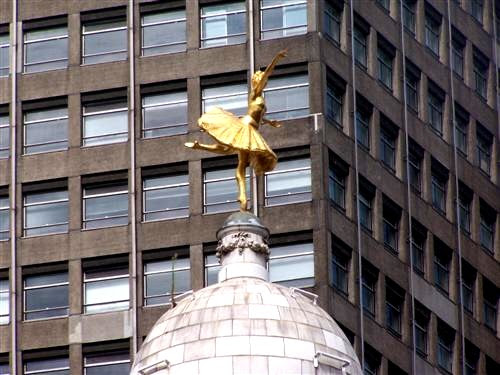 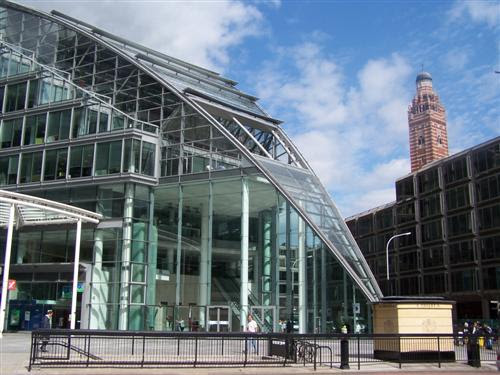 Buckingham palace area was crowded with tourists. It must be weak British pound that has brought back tourists from all over to UK. 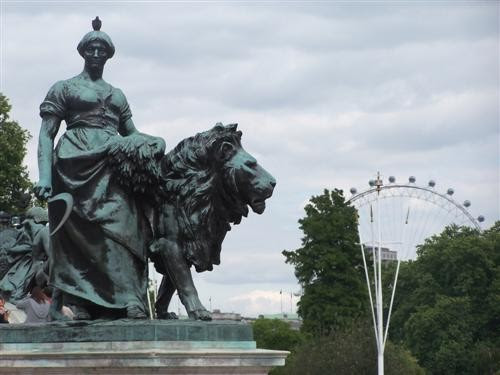 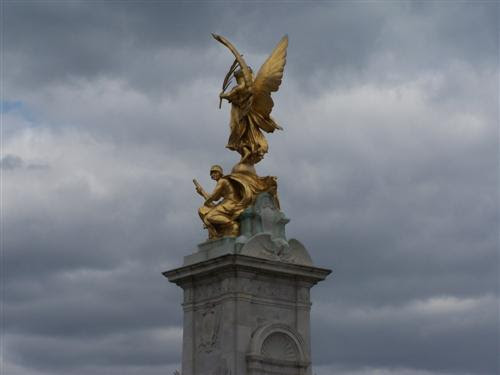 Finally it was the time to take the train back to Gatwick airport but I was quite satisfied by my walking initiatives.
There was a time, when I hardly saw anything in the cities I visited for work. I have been to so many countries and cities, where I saw just the airports and the hotels. But I like my new me, the one who decides to walk, to get lost, to talk to people and to get a feel for the people and the cities. It is more tiring and but also so relaxing!
And, I love clicking with my digital camera. So that I may not spend a lot of time walking around as a tourist, but then I can look at the pictures back home and try to see things that I didn't have time to stop and admire.