I am here for a women's orgasnisation working with women from "low" castes in rural areas of Nepal. I was worried about coming to Nepal with all the news about maoists' attacks and the imprisonment of all the political leaders by the king.

In fact tourists have all but disappeared. Thammel, the old part of Kathmandu, full of narrow alleys bursting with tourist shops frquented by europeans and americans, seems a little desperate. I was told that guest houses and small hotels have been forced to close because of lack of tourists.

Maoists have declared a complete block of Kathmandu from 13 March and some big action is being threatened by 4 April, so things may get even worse.

This means that it is easy to find a cheap room in a good hotel.

People speak about the BBC interview of Prachannda, the head of maoists and his assurance for maoists' willingness to renounce the path of violence and to be part of the political system. Yet, everyday there are news of new fights, bombs, and people dying.

I have been told that from some angles, I look like Prachannda. That really makes me afraid. I am suppose to travel in far away rural areas, some of which are close to maoists strongholds and have been theatres of their fighting with police and military. What if they decide that I am Prachannda and decide to shoot me?

In the some of the rural areas that I am going to visit, poverty and oppression are deep-seated. Most of the maoist boys come from these homes I am told.

With some Nepalese friends, I discuss the revolution of maoists. I agree with their desire of human dignity, social justice and equity. But I don't think that violence or revolutions change things. Because, human beings are human beings and they all want comfort, money, good things, power, etc. A few committed and idealists don't run the revolution, it is ordinary persons in villages, small towns and communities, the frontguards of the revolutionaries, who will have to make a new system, and they won't be so different. In the end it will mean replacing the oppressors of the past with new oppressors.

I understand their impatience with slowness of change and yet, I don't think that there is any alternative to dialogue, empowerment and slow change from within.

Lovely green fields with women in colourful clothes makes for pretty pictures. The women mostly wrap the saries over the lower half, keeping the upper halfs covered only with blouses. To Indian eyes, it makes them look more defiant, less shackled by the veils of modesty.

I was in a meeting with a women's group in Chaimalle. The women were from Danuvar community, struggling for survival.

The bridge is hanging over the waters of Bhagmati river, about 35 km from Kathmandu. It is made of iron plates with gaps between them, and as you walk over it it moves and shifts like a sleeping snake, waking up and moving under your feet. Looking through the gaps at the boulders below and the rushing water, gives me vertigo.

In Kathmandu, the river is a filthy drain. Behind Pashupatinath, as people give the last bath to the dead bodies of their near and dear ones, before placing them on the funeral pyres, it seems that they can't see the thick filth in the holy waters, while they stand folding their hands in the sacred prayers.

It is like Jamuna in Delhi. Not the Jamuna of my childhood, when we played in the sand behind I.P. college. I wonder if Jamuna is still so dirty like Bhagmati river in Kathmandu or they have been able to clean it!

As we are away from Kathmandu, the frothing waters of Bhagmati crashing on the boulders, raising up a spray, seem clean and the whole scene looks like a paradise. As I cross the river, I realise to my horror, the shining white froth on the water is like thick soap, probably coming out of some factories or drains.

Some persons stand in the middle of the river. Are they fishing, I ask. No, there is no fish in this river, not any more, according to the two women accompanying us. Those people are mining sand, they will sell it.

Do their legs get sores and rashes, standing in the middle of the soapy-chemical foam of the river for hours, I ask. The women shake their heads, not understanding my question.

***
Why do they carry things this way, holding the strap on their heads, I wonder. We are in Okhaldhunga district in the mountains.

Men, women, children, all of them carry things in this way. Small bags, big baskets full of green vegetables and fodder, bundles of wood, sheets of iron, logs, everything is carried with straps on their heads. People walk bent forward, the straps straining on their foreheads.

It has been years since I trekked in the mountains. I feel fat and undignified, moving like an elephant while all others move quickly and nimbly. The stones push through my Italian shoes and hurt my feet, while they walk in rubber flip-flops careflessly. They chatter happily and I gasp like an asthmatic.

I look up the mountain with despair. The climbing never seems to end. Far away I can see the ribbon of the path, hugging the mountain, going down towards the river bed. We have walked all that. Now this path going up.

The village women, they have made this path, Sarmila tells me. It is a narrow path on which stones have been placed. It is not a paved path, the stones have just been thrown there, one above another. I can understand that in rainy season, walking on these paths must not be easy and to have stones under your feet that stop you from slipping down, must be helpful. If you fall down, obviously you have greater chances of breaking your legs over them, I remind myself.

Each stone must weigh half a kg, so how much time did it take those women to line this path with all these stones? I imagine myself, going down the path, down to the river-bed where we had started, pick up a few stones on my back and then climb up to this place. Even the thought of it is too tiring, I give up imagining.

Has anyone ever had heart attacks while climbing these mountains, I want to ask, but I am afraid that asking such questions will bring bad luck. So I keep my mouth shut. Rather, I am too busy gasping to ask stupid questions.

***
We are staying with an old woman in her "hotel" at Biplate village in Okhaldhunga district. Her hotel has two rooms. A big room where she has a kitchen and at night it becomes the women's dormitory. The next room is men's dormitory with closely packed cots.

For breakfast, we got roasted potatoes with chilli sauce. The toilet was outside the house, down the hill. After dinner I had taken my usual diuretic for the blood pressure so I needed to pee. Holding a small torch, I went out. It was pitch black and the idea of going down the hill to search for the toilet made me shudder. I finally decided to cross the road and pee over the deep valley below. Above, the sky was full of stars. I felt like a naughty child, peeing in the open like that.

In the morning, there was a procession of donkeys going up on the mountain behind us. There fifteen or twenty donkeys with bells around their necks in each group. They were followed by a man or sometimes by a boy. I was told that it is a 3-4 days' journey, going to the Salu, some place in high mountains in Himalaya.
A man who had slept in our hotel, came out  carryng a huge bundle of boxes and started walking on the same path. For four days of walking to deliver those boxes he will get 450 nepalese rupees. For food and sleeping on the way he will spend about 400 rupees and after four days of back-breaking work, he will earn 50 rupees. I could not believe it, when they explained it to me. One Euro is about 81 rupees.

Then came this boy following his buffaloes or were they yaks?

***
We were back in Kathmandu. It was the day of the meeting with sex workers. I was curious to see the sex workers, when I went to their meeting. Where are the sex workers, I looked around. I didn't see them. I saw some young women, sitting together. Some of them had their children with them, completely unlike the image of sex workers I had in my head from all the Hindi films.

Do you want to say something, they asked me. I am used to talking but for once, I could not find the words. I mumbled something, feeling inadequate.

***
They sat on the ground, sitting patiently for hours. I squirmed and shifted every 5 minutes. Moves my legs this way and that way, trying to find some psoition where I felt comfortable. I wished that there was a chair.

How can you eat this way, I asked myself, trying to reach the thali on the ground.

They talked about domestic violence, alcoholism, poverty, hunger, saving money, second wives, going ahead even if men of their communities do not agree.

"Her husband cut the big toe in her right foot with a knife", Sarmila pointed out the woman who was speaking. He was drunk and angry. That woman was talking about the importance of her women's group, importance of her chicken raising, importance of not giving in to the threats of the men from the village.

Happy 8th March, even if I am late.

Here are some images from my Nepal trip: 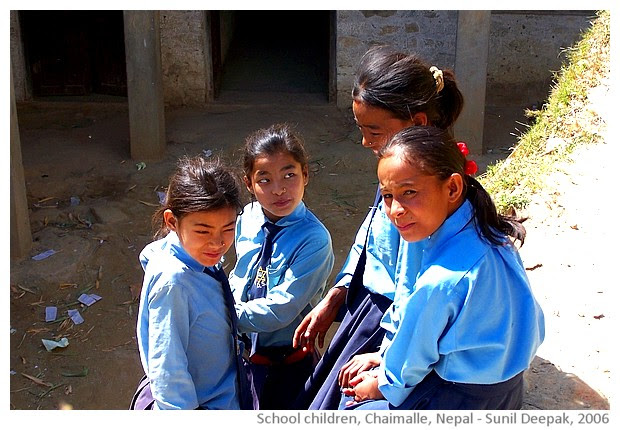 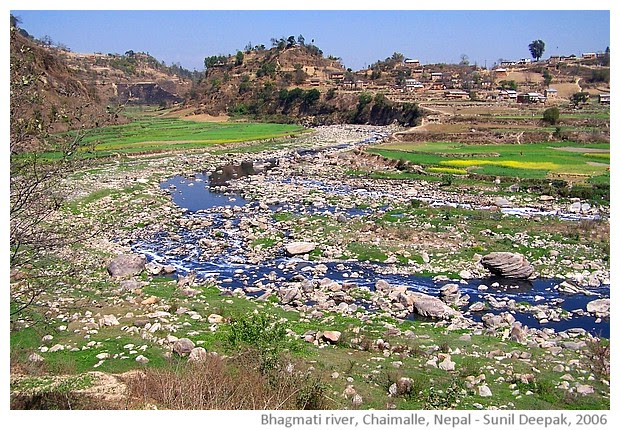 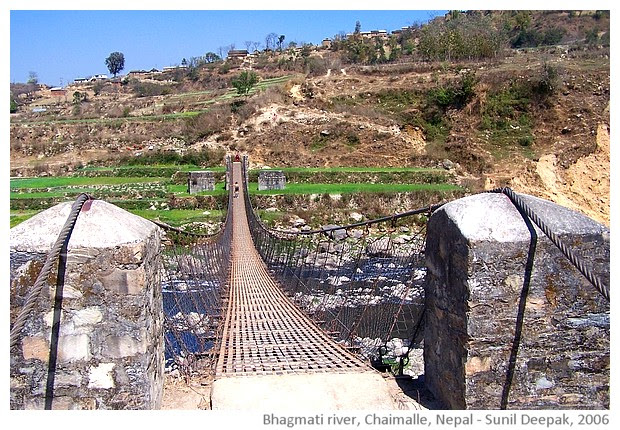 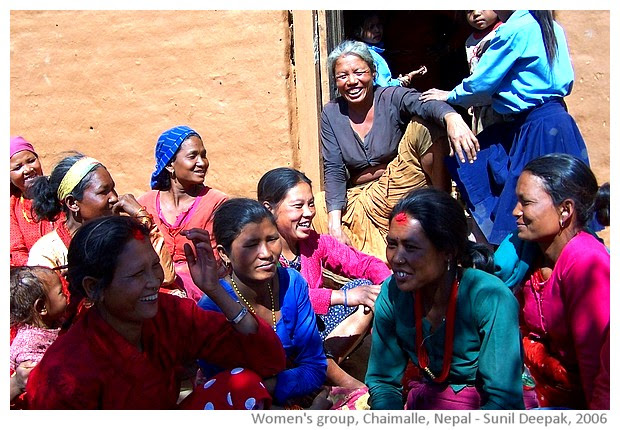 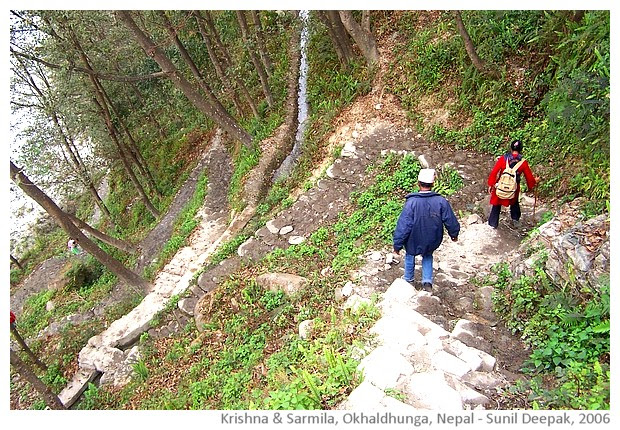 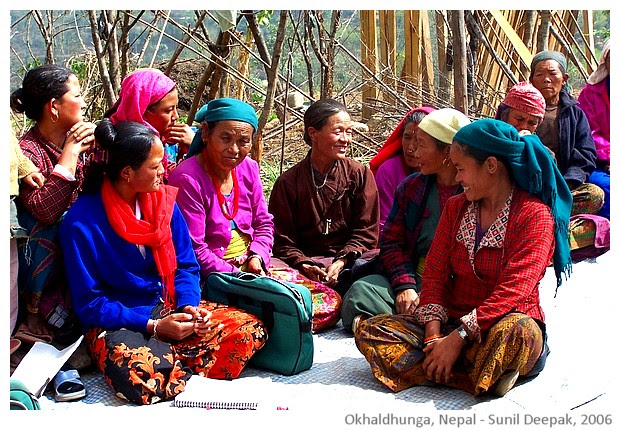 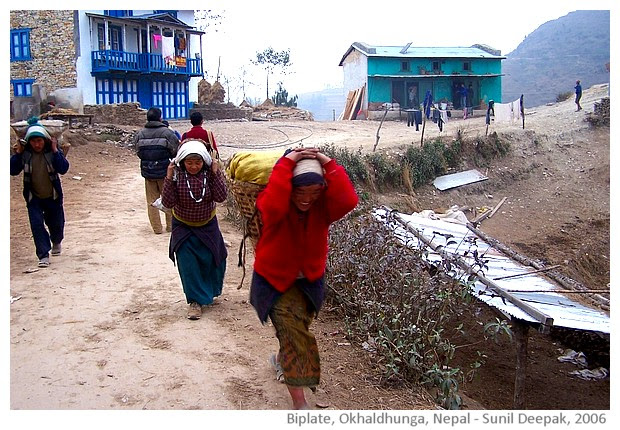 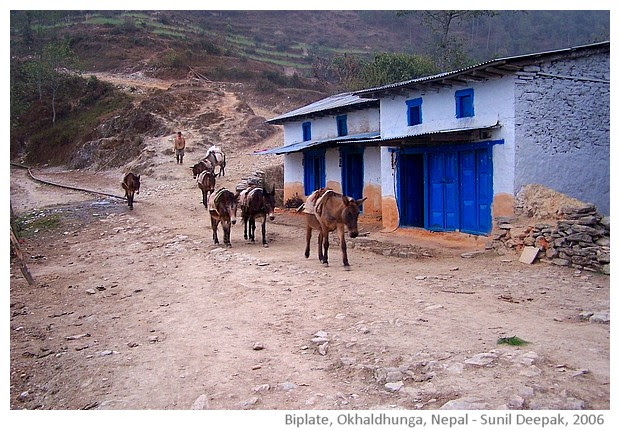 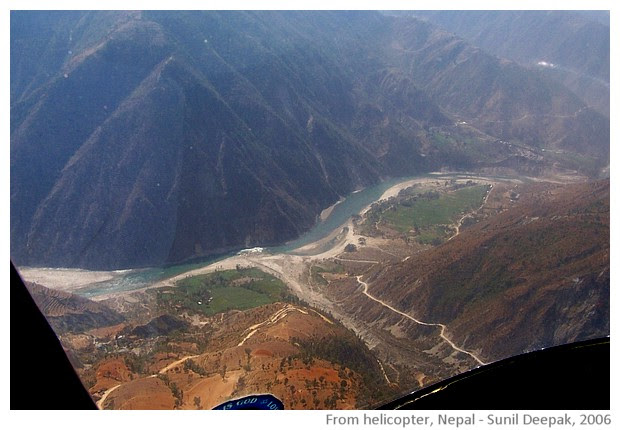