Powerless - The Ironman and the Goddess

" Powerless" is an engaging documentary film around the theme of electricity in India. It explores the lives of the urban poor and the impact of electricity shortage. It also looks at how the system makes it so difficult, if not impossible, to bring any kind of reform. It tells the stories of two persons - Ritu Maheshwari, an officer who wishes to bring reform; and Loha Singh, an electricity thief, who looks at himself as a kind of Robinhood. "Powerless" is a powerful film, forcing you to reflect on your ideas of right and wrong. 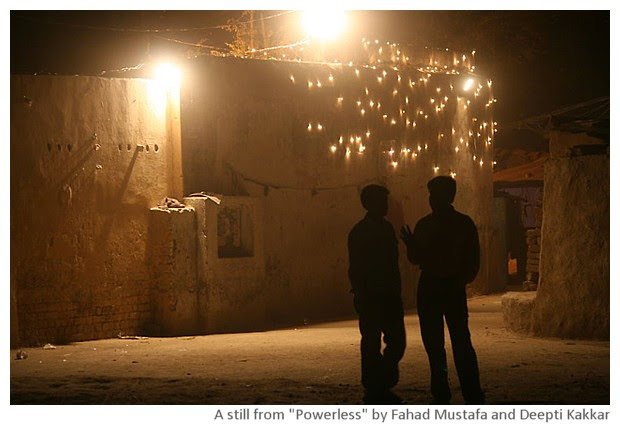 Ironman and the Goddess

When I saw "Powerless", I was immediately struck by the names of its two key figures - Loha Singh and Ritu Maheshwari. Loha Singh, literally means "Iron Lion" and Maheshwari, the wife of Shiva, is the goddess Shakti in Hinduism. With an anti-hero playing with fire and the lady official, using her power in the hierarchy to bring a change, can be seen as the story of the Ironman and the Goddess.

In the initial part of the film, the two start on the opposite sides - Maheshwari wants to reduce the financial losses caused by the electricity theft and Loha Singh wants to ensure that small entrepreneurs and their workshops can continue to run, even if that means that he steals electricity. As the film proceeds, you realize that both have their hands tied and that both will be used and then abandoned by the system.

Maheshwari is an IAS officer, part of the Indian National Administrative service. To become an IAS officer, you need to go through a tough entrance exam and a selection process. Every year, hundreds of thousands of young graduates from the small towns of India try this entrance test and only a small minority manages to get in. Some of them, like Maheshwari, come with idealism and dreams of reforming the system.

Loha Singh is a barely literate nobody, who has come through a life of informal, low paying exploitative jobs since his early childhood. Circumstances have made him a "katiyabaaz", someone who splices the electric wires. His life is still one of poverty and a daily game of roulette that can end with his death.

Kanpur, the city where Maheshwari and Loha Singh come across each other, with 3 million population is an industrial town on the banks of the river Ganges in the state of Uttar Pradesh (UP) in north India.

Kanpur faces chronic electricity (power) shortage, with long power-cuts that last up to 10-15 hours every day. The electrical infrastructure of the city is grossly outdated with loss of electricity and frequent burnouts. Personnel of the electric supply company ask for bribes from the consumers - bribes are needed for everything, including for manipulating electric bills and supply.

Loha Singh knows how to connect you to the electric lines passing on the streets and if needed, he can steal electricity from your neighbours. He has grown up in the city, starting as a child worker. His clients call him Robinhood - it costs less to pay him than to bribe the personnel of electric company and he responds faster to their needs.

Ritu Maheshwari, an idealistic IAS officer is the new CEO of the electric company, she has just arrived in Kanpur. She wants to reform by mobilizing the personnel, answering the needs of clients, and stopping the electrical losses through theft. Persons with long experience in the company and set in their ways (mostly men), tolerate her with smirks and barely masked contempt, but Maheshwari is persistent, and she refuses to back down.

Many persons in the city and the personnel both are unhappy with Maheshwari's reforms. She is disturbing the status quo without any improvement in electric supply. The summer has arrived and the electricity need is increased. People who have the means, use their own generators increasing the pollution.

Loha Singh does not care about Maheshwari. He knows that officials can come and go, but the city is not going to change.

Election time arrives. Irfan Solanki, a local politician, intervenes, asking Maheshwari to back off. However Maheshwari does not understand the rules of political patronage, and refuses to bend. Solanki thunders about the "arrogant woman who wants to command" in his election campaign and gains public support to win the election. Maheshwari is transferred to another city and the life goes back to the old ways. 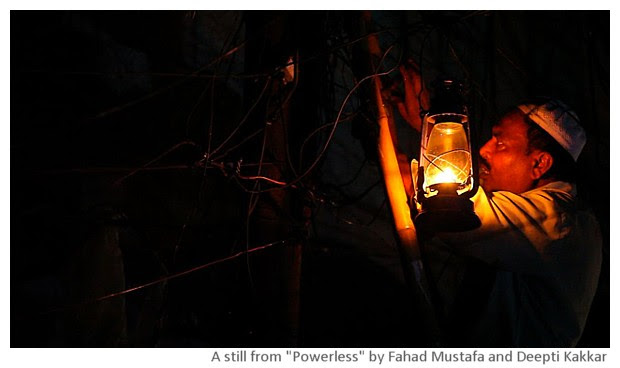 Usually such films are made when such stories are already over and have created some news for some reason. The film-makers collect testimonies, share documents and stage some of the key events for making their documentaries. Some times, on some drammatic real-life events, commercial films can also be made. In "Powerless" it is remarkable that the real-life drammaticity of the whole arc of events has been captured with actual protagonists without staging or fictionalizing anything.

The film has three main characters - the city of Kanpur, Loha Singh and Ritu Maheshwari. It gives us an intimate glimpse into some of the complex issues facing the individuals who need to negotiate their lives in the context of local social, cultural and economic systems. "Powerless" does not explain the complexity, you can glimpse the complexity through the lives of Loha Singh and Maheshwari.

The city of Kanpur in the film is a part of the old city. It is not presented in the kitsch magic realism of Bollywood - rather it is a dystopic post-modern scenario where the city is like a dark urban jungle of decaying houses, dirty spaces of garbage and open drains, with hundreds of electric wires criss-crossing the screen like spiderwebs. The usual joie de vivre between the people in India that usually dominates its congested life spaces, is hardly visible in this film. Rather the spaces are dominated by moments of anger, angst and despair. Large parts of the film have been shot at night, sometimes during power blackouts, that deepens the dark mood of the film.

The continuing feudal mentality of the people, after 60 years of independence of India, comes out when the middle aged man pleading his case and asking for leniency, sits down on his knees and calls the officials "Mai baap" (mother and father). It comes out when the local politician Solanki, shouts at Maheshwari in her office, "Lower that finger, don't you dare, I am the representative of the people."

Loha Singh has the biting carelessness and wistfulness of a man living on the edge. He knows the system and understands that idealistic officers trying to achieve legality are without any hope of success and that his life will continue. He is also aware of his own fragility when he acknowledges that he does not know any other work and has no other options for survival. His hands carry the scars of his daily duels with the naked live electrical wires. He also knows that sooner or later his luck is going to run out and he is going to end with an accident that will kill or disable him.

Ritu Maheshwari has the look of a small town woman. She has a house with a garden and a marble floor. Compared to the dark world of Loha Singh, her life is luxurious (though in comparison with the booming entrepreneur and professional classes of the upworldly mobile India, it would be considered very modest - in fact, few persons from well-off families in India, dream of being part of IAS). She has already been transferred many times but has not yet lost her idealism. In the patriarchal society, women like Maheshwari can be venerated like goddesses at some levels, especially in the media, but at more personal levels and especially with their male colleagues, they are often bitched about as being arrogant or dominating. At the end of the film, she knows that she has lost her fight. Unless she can forget her idealism and learn some of the rules of the game, a life of transfers from one place to another awaits her.

Editing and music are used very well in the film, adding to its quasi-commercial film drammaticity. In fact watching "Powerless" reminded me of a recent commercial film, "Shanghai" (by Dipankar Banerjee, 2012), that had some common elements with it - it was also based in an UP town and had an upright IAS officer. "Shanghai" was about the murder of an idealistic politician who is unwanted because he questions the dominant notions of development and globalization. In that film, the IAS officer manages to extract his revenge from the subservient bureaucracy and the corrupt politicians. Compared to most of the commercial films coming out of Bollywood, "Shanghai" was not bad.