Nicola Zamboni and Sara Bolzani are two Italian sculptors. I like their works very much. In May 2013, I had the opportunity to visit them and talk to them about their art. This post is about their visits to India and how India has inspired some of Sara's sculptures. 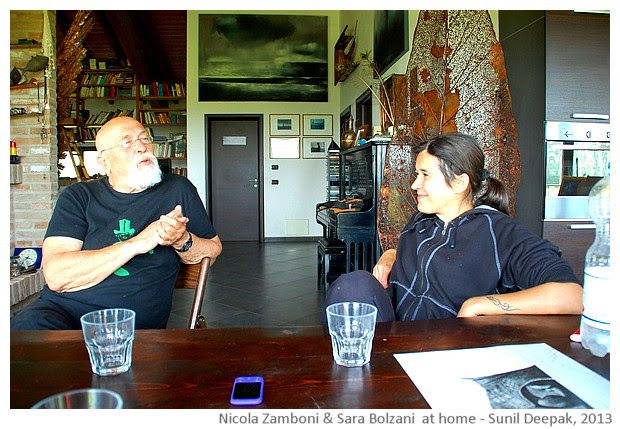 Nicola and Sara live in Sala Bolognese, a small rural town to the north of Bologna. In the middle of the farm houses, their house also seems like a usual farm house.

When we reached their home, Nicola was waiting for us in his studio on the ground floor. He took us up to the first floor where they live and where Sara was also waiting for us. They had just been in India at the Maha Kumbh Mela in Allahabad and then had been to visit Varanasi. The visit had had a strong impact on them and ideas of India had influenced Sara's recent art works. So our conversations started with India.

Here are some excerpts from this conversation:

Sara: My series on sculptures of women started from a journey to India, more than 10 years ago, when we had gone to Rajasthan. I like very much the way women wear sari in India.

Nicola: In India I thought that Sara looked so Indian and we met one person who was so much like her brother.

Sara: In India my skin had become darker and many people thought that I was an Indian so they spoke to me in Hindi. I really wanted us to stay on in India for a longer period and work with some Indian artists, but we had no contacts with any artists there. I am also interested in learning more about Hindu mythology because I feel that can be an inspiration for my work. I was told about the different gods and how each god and goddess is linked to an animal, I want to explore this relationship. I need to find some easy to understand book. I tried with Bhagvad Geeta but it is just too difficult and it does not talk about the different gods. I have done some work on Greek mythological figures like Antigone. I like expressing those stories through my sculptures.

Sunil: In Bologna, there is a significant Bengali community and they organise Durga Puja every year at Centro Zonarelli, so that can be an opportunity for you to observe some of the Hindu mythologies directly rather than reading about them in books. That sculpture (pointing to a sculpture in the room) with the tiger and the woman seems inspired by the figure of Durga in Hindu mythology.

Sara: Actually that sculpture is linked to a daytime dream that I had many years ago. It was a vivid dream, very strong and very emotional. I was going from house to Milan and I was in a hurry, suddenly I felt as I had turned into a tiger, and I was running on four legs. It was such a powerful feeling. I have tried to express that feeling in this sculpture of the tiger and the woman.

I made it three years ago and a person who collects our works wanted it but for a long time I did not want to see it, I felt that it was very personal. In the end, I made a copy of those sculptures and sold it. Then another collector bought only the woman, so I copied the woman's sculpture. Now another collector wants both of them, so I have to make a copy of both the figures because I always want this sculpture with me to remind me of that vivid dream.

Here are some images of Sara's works including the woman with the tiger and two of her India inspired works. 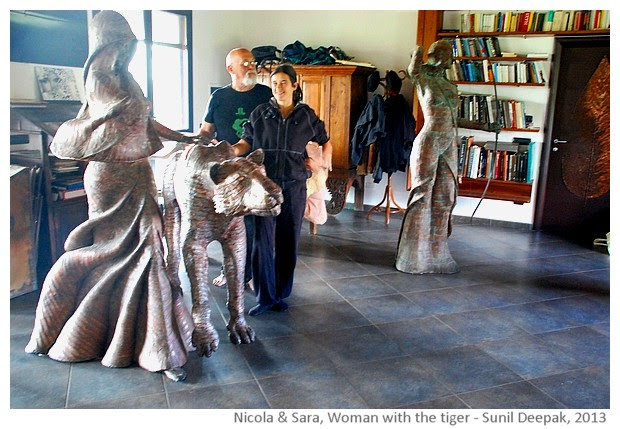 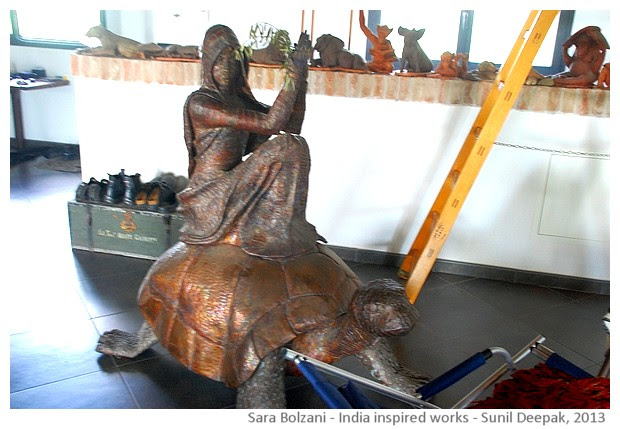 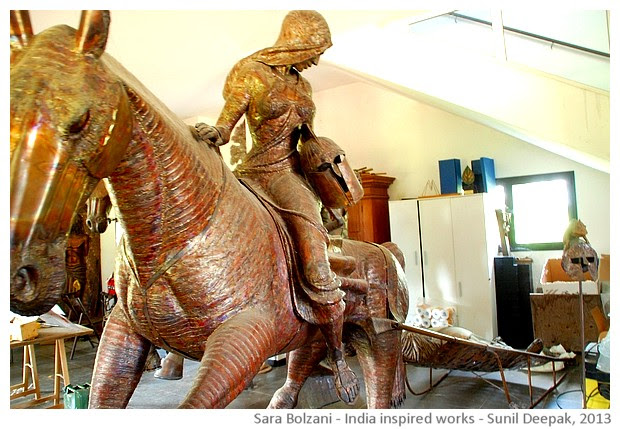