"Trampolieri" are the people who walk on stilts. Bologna (Italy) where I live, has a group of dedicated stilt-walkers who use wonderful creativity and imagination to choose new styles, costumes and colours for each of their public appearances.

This photo-essay is a homage to this group of people. It presents some of their pictures that I have clicked over the past 8 years. This first part of the post focusses on the period 2005-2011. 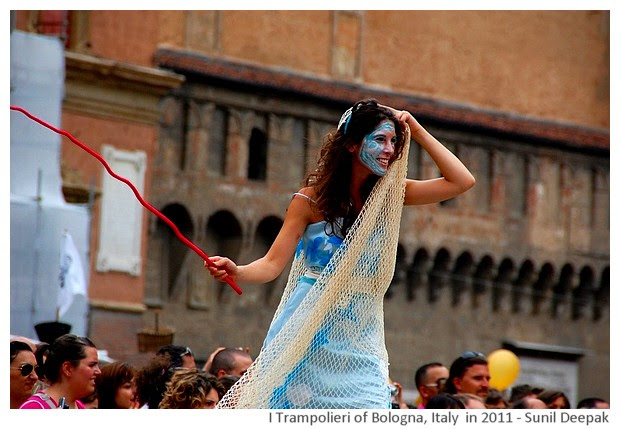 Let me start with some general information about stilt-walking. The art of stilt-walking goes back a long time. There is a mention of stilt-walking in ancient Greek texts, more than two thousand years old. When I was a child, once I had seen a tribal group do a dance on stilts in India. People living in marshy areas build their houses on stilts and sometimes use stilts to cross marshy-watery places. So stilt walking is common to many countries and cultures.

There are different kinds of stilts. You can read more about them on Wikipedia.

In the image below you can see the stilts used by the Bologna group of stilt-walkers - these are made of sturdy wood. A wooden flat piece is fixed to the sole of the shoes, which is then fixed to a wooden piece on the top of the stilt. It requires a good sense of balance and lot of practice to do stilt-walking safely. 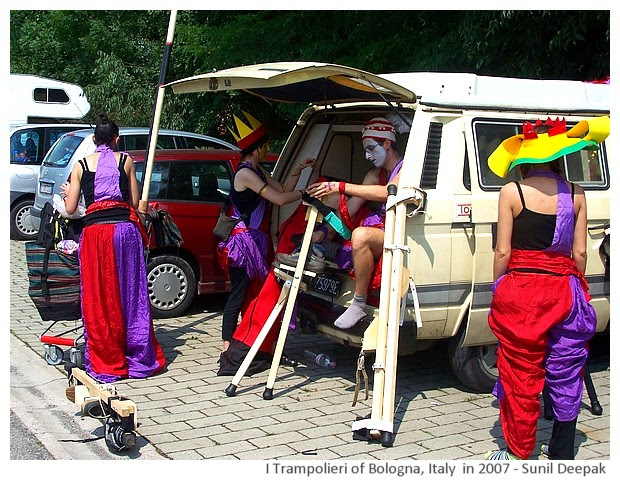 I saw the the Trampolieri of Bologna for the first time at the preparation of the summer festival parade (Par Tot parade) in Villa Angeletti park in 2005. I was not too impressed by them. They had a pale hooded dress with black designs on their faces and bodies. 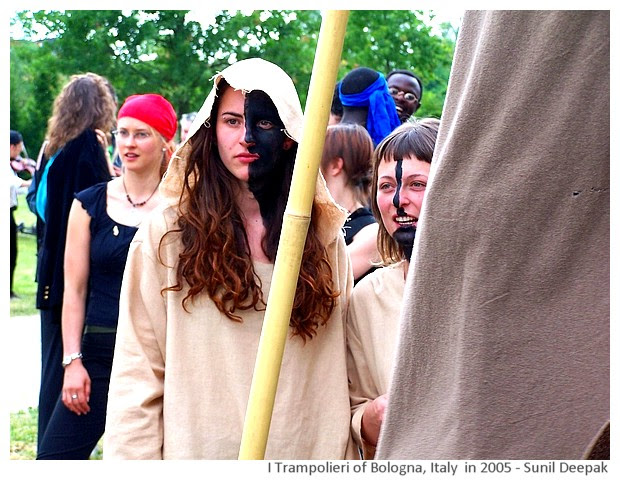 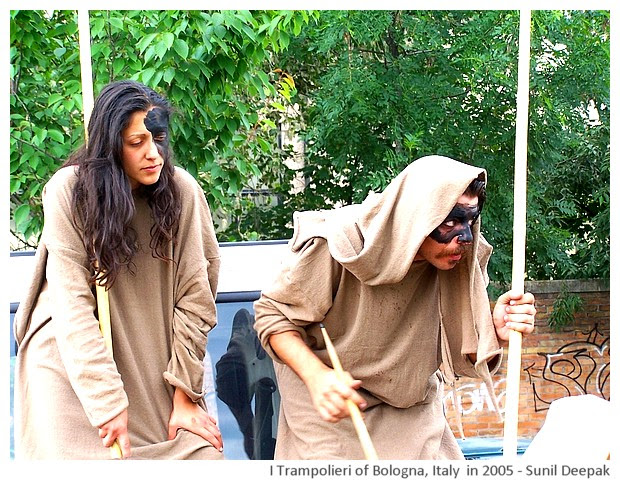 In 2006 I saw them at the summer rave party. Rave parties are about losing inhibitions, dancing, drinking, and making a lot of noise. It also means getting stoned by smoking weed or taking stronger drugs. In that occasion, the costume of the Trampolieri was simple and in line with the spirit of the rave party. Once again, I was not too impressed with them, though they seemed to be having a good time and enjoying themselves. 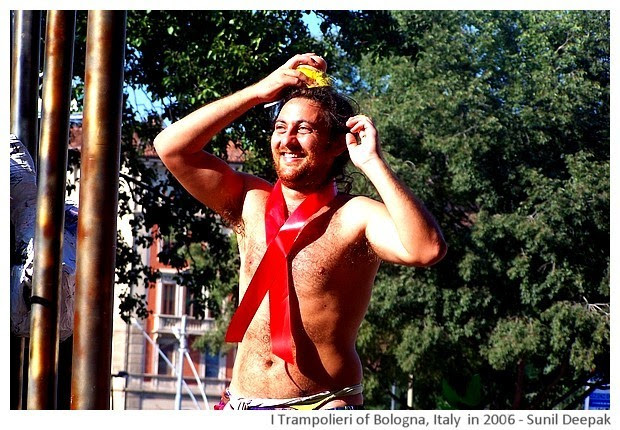 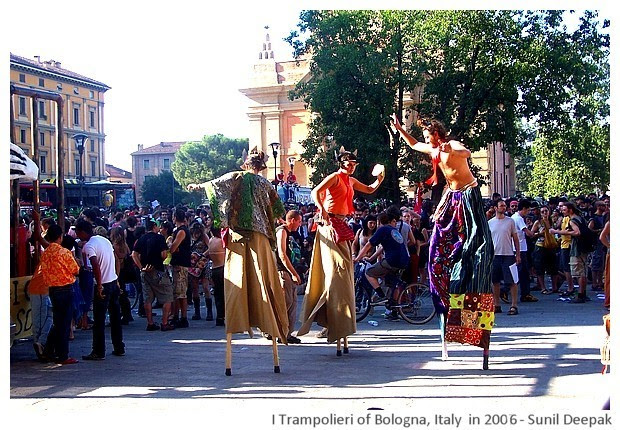 The summer festival preparations of the Par Tot parade at Villa Angeletti park in 2007 was the first time that I looked at the Trampolieri with more attention. They had a colourful look. Some people had painted their bodies in gold, some with white and red and some others with red and blue or red and yellow. The costumes had red, purple and black with blue-yellow hats. Thus, in 2007 I clicked a lot of their pictures and started recognising them as a group. 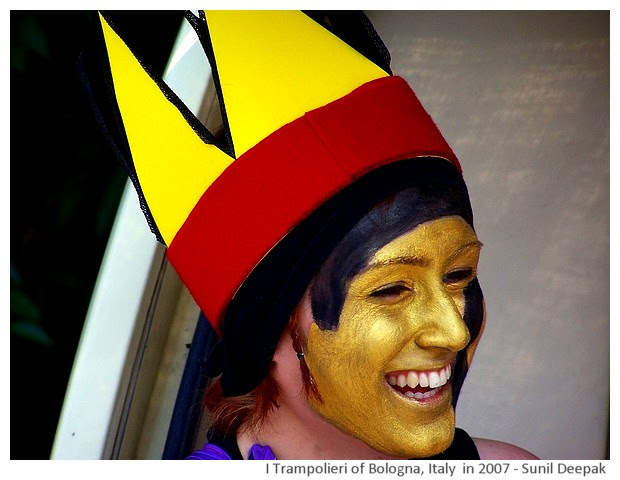 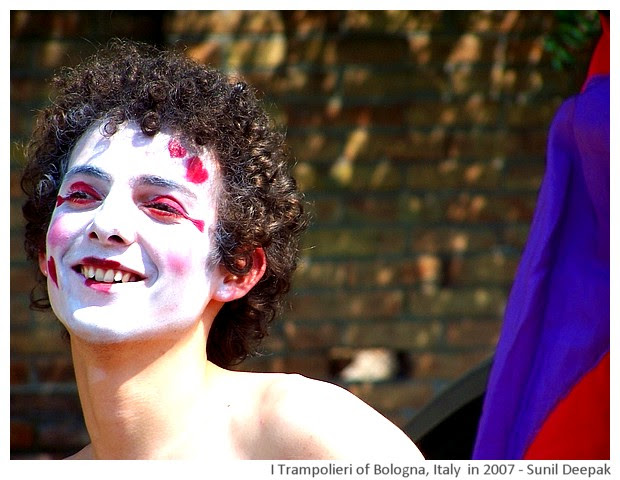 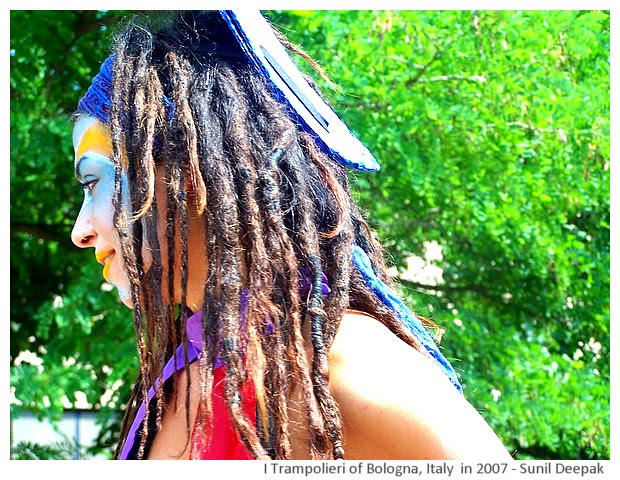 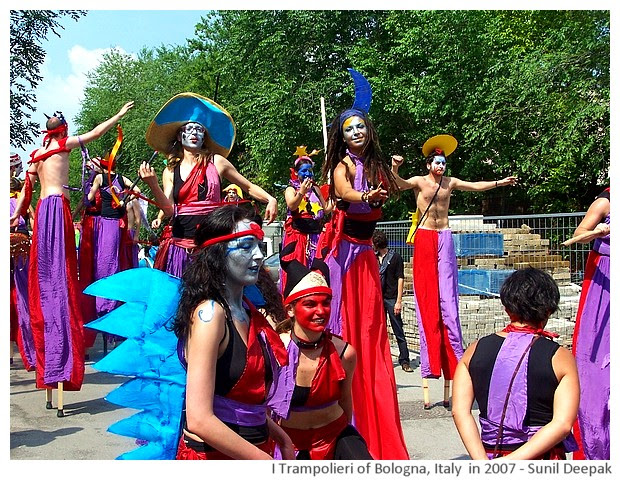 In 2008, I had a glimpse of the Trampolieri at the Bologna GLBTIQ (Gay, Lesbian, Bisexual, Transexual, Intersexual, Queer) pride parade. It was very crowded and noisy, and I could only see them a from a distance. So not many pictures came from this encounter. My favourites in this occasion was a young couple in blue. 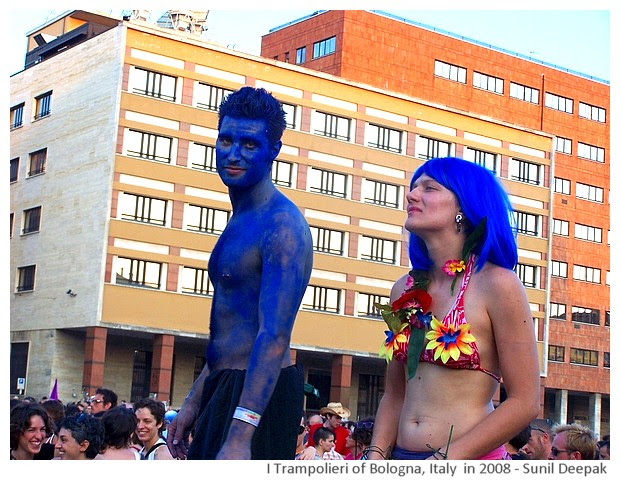 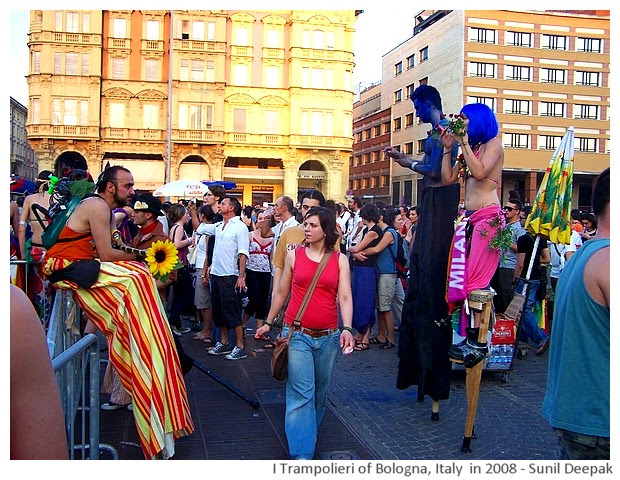 I didn't find any good images of Trampolieri in my image archives from 2009 and 2010, and I only found them again in 2011. At the Par Tot parade in the summer festival at the Piazza Maggiore of Bologna, the Trampolieri were present in two main groups. The first group was part of people dressed as giant insects, like the two guys dressed as black spiders shown in the images below. 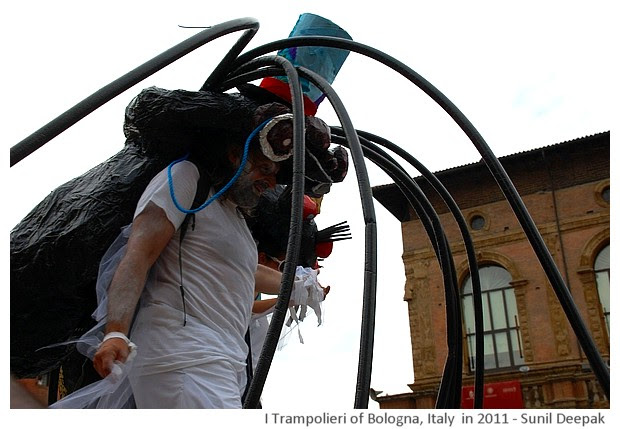 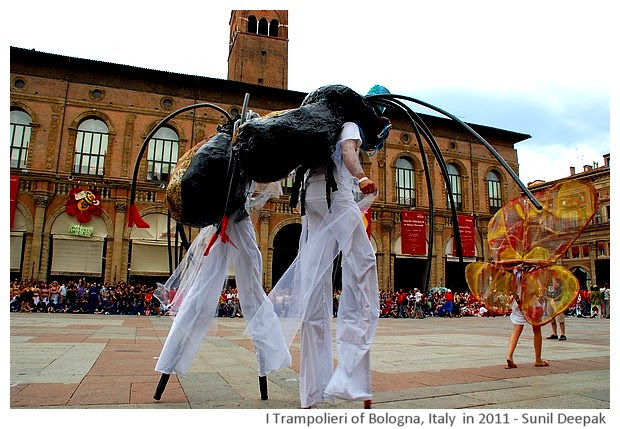 The second and more numerous group was that of devils and angry spirits, like the followers of Shiva, in different colours and shapes. They were all closed in a prison of a white chain linked to a wooden pole held by the lead couple. Though they were trying to be scary, I think that they looked nice - in my opinion, it was their best look so far. The quality of their body make-up and costumes had improved. 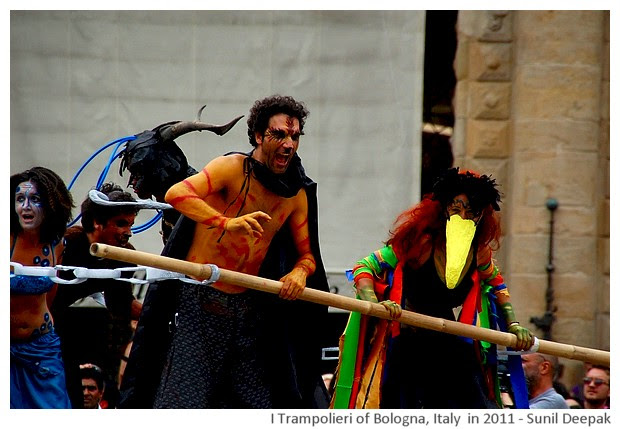 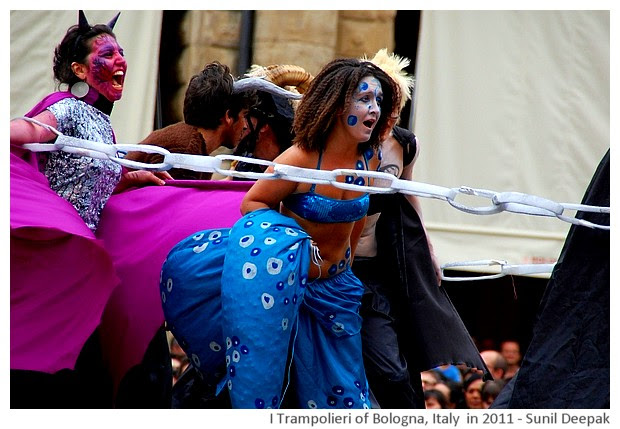 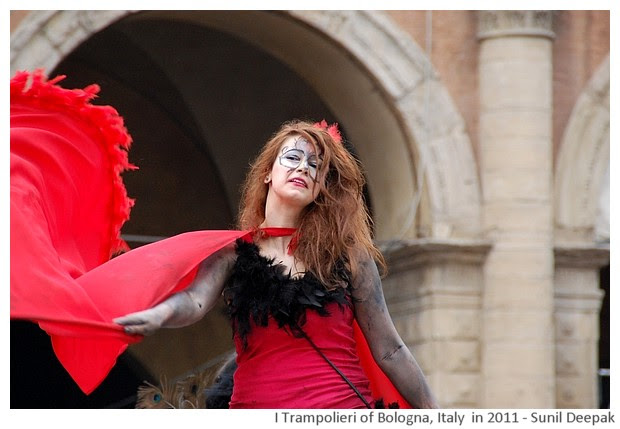 I hope that you have liked this brief introduction to the Trampolieri stilt walkers of Bologna.

To close this post, the last image is from the 2007 Par Tot summer festival parade, of a girl dressed as the sun. 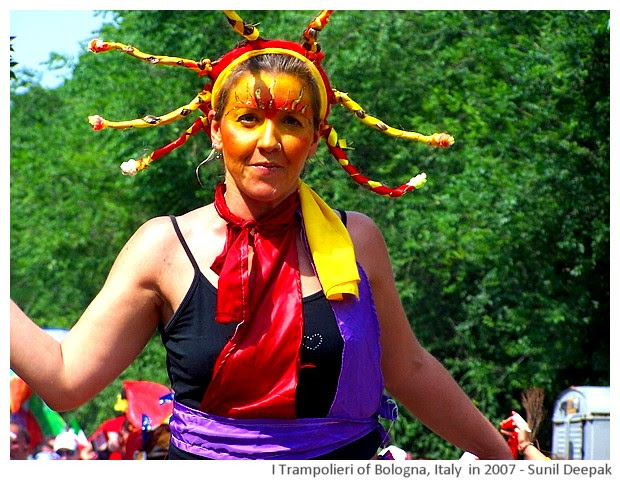 You can check the Facebook page of the Trampolieri of Bologna for more pictures and to know about their other initiatives. You can also read the second part of this post that presents their costumes from 2012 and 2013.
***
Posted by Sunil Deepak at 06:56