I was back in San Paulo after about ten years. Scared by the "friendly" advice on the high risk of criminal attacks in this city, during the earlier visits I had never ventured out of hotels. However, this time I was determined to forget my fears and discover the city. 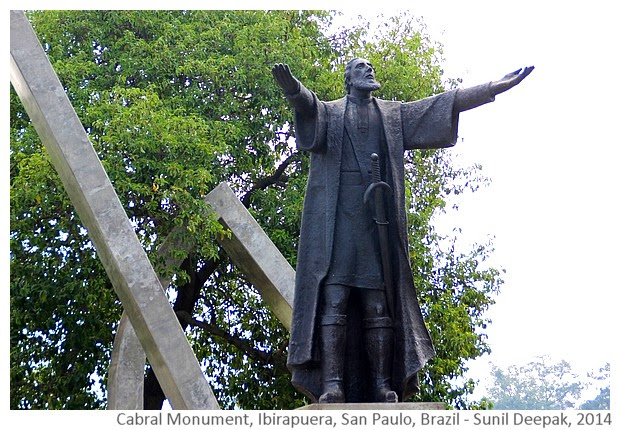 The first part of this photo-essay focuses on areas around the Ibirapuera park, one of the largest green areas in San Paulo city.

San Paulo (or "São Paulo" as the Brazilians call it) is the biggest city in the American continent and along with Rio de Janieiro, the most well known Brazilian city. Fortunately, the hotel where I was staying was close to Avenida Paulista in the city centre, so inspite of my busy schedule, I could go out for early morning and evening walks to discover some parts of this city.

I was immediately attracted by the large green area of the Ibirapuera park on the city map given to me the concierge at hotel Tivoli. It did not seem very far.

"It has three museums and two lakes, it is very beautiful and is one of my favourite places in the city", the helpful concierge had told me, "but you can't walk there, it is too far."

However, I think that walking is the best way to discover a city, and so I had ignored the advice of the concierge. I took Casa Branca street. It took me about an hour to reach the park, with a few brief stops on the way. I loved the Tabebuia trees (Brazilians call them Ipe trees) dense with purple flowers, that are very common in this part of San Paulo. It is the rich part of the city with many consulates and embassies.

Though we were still in October, at one place the municipal government had already set up some Christmas stalls with giant pelouche-wild life. 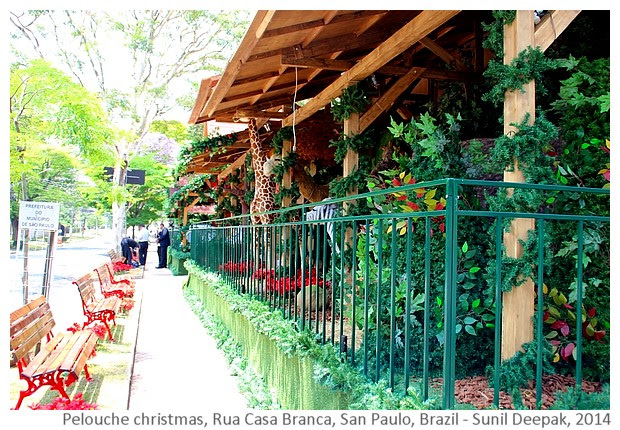 On Avenida Brasil at the corner with Rua Campista, I saw a statue of a short, heavy set man wearing a suit, underneath a tree. The plaque with the name of the person was defaced so I could not see who was that man and why was he honoured!

Near the statue, underneath some trees in a corner, there were make-shift shelters with car wheel-plates on the tree trunks and posters similar to those of "Occupy Wall Street" movement from a few years ago. Even they looked forgotten and semi-abandoned. 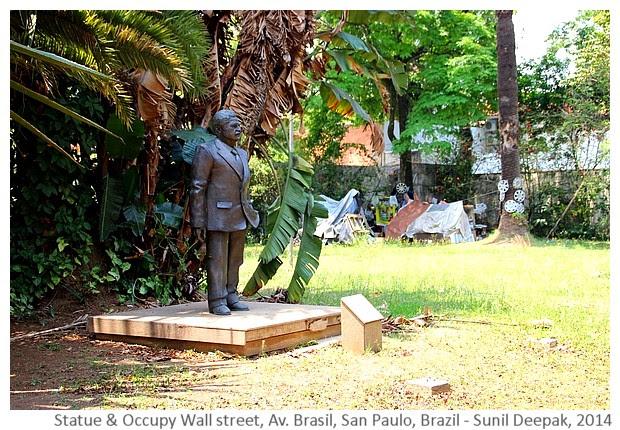 MONUMENT TO THE FLAGS

Near the entrance to the Ibirapuera park, in an oval shaped traffic roundabout is a massive sculpture, the Monument to the Flags (Monumento as Bandeiras). It is the work of Brazilian artist Victor Brecheret and was made in 1951 to celebrate the 4th century of foundation of San Paulo city.

The fifty metres long sculpture shows Portuguese explorers on horses along with some black slaves and Amerindians, pulling a canoe out of a river. A grand stone tableaux, it reminded me of some Soviet-style sculptures in the Tien-a-men square in Beijing (China). 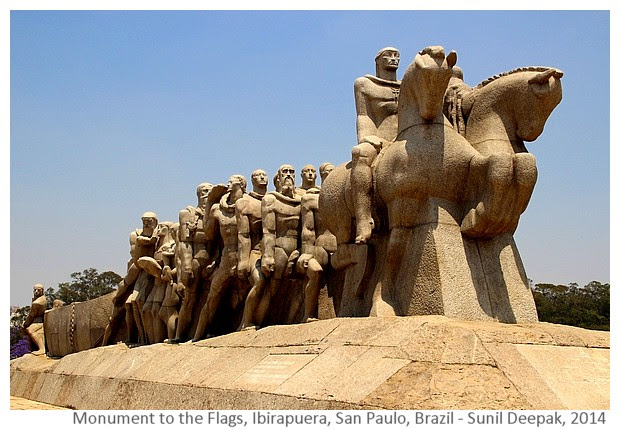 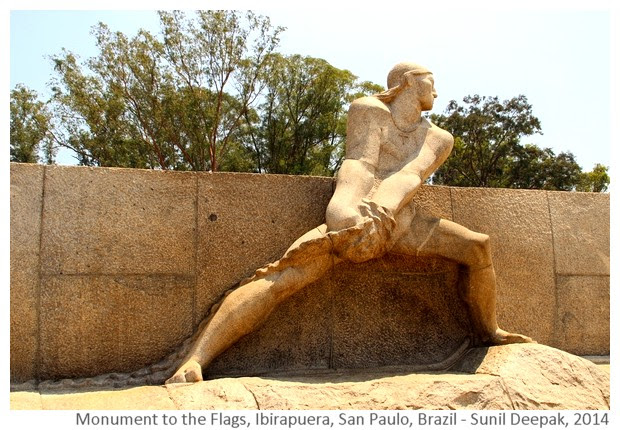 I spent a long time admiring this monument.

THE LAKES OF IBIRAPUERA

Just behind the Monument to the Flags, you can see first of the two small lakes of Ibirapuera park. It is a mango-shaped lake with a round peduncle at its top end, and it has a series of fountains that rise and ebb in constant motion. 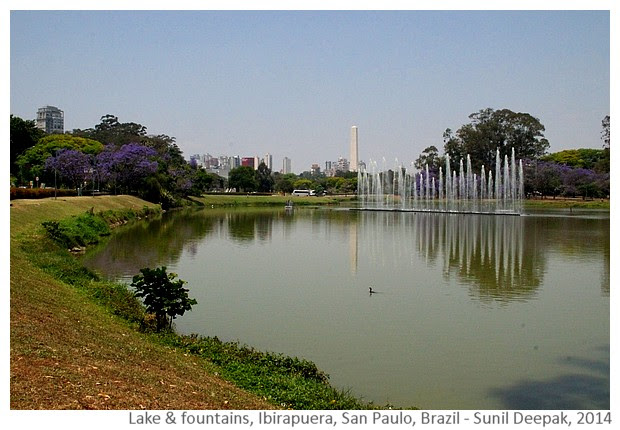 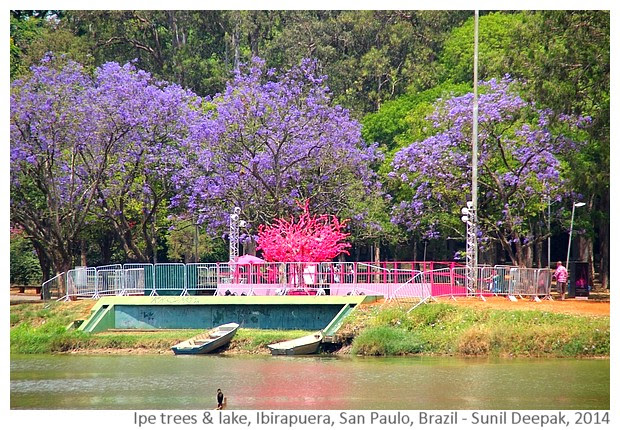 The second lake is narrower and more irregular with a bridge in its middle.

On one side of the second lake, I found some young photographers shooting pictures of a group of young men showing off their bodies, probably for some sports magazine. 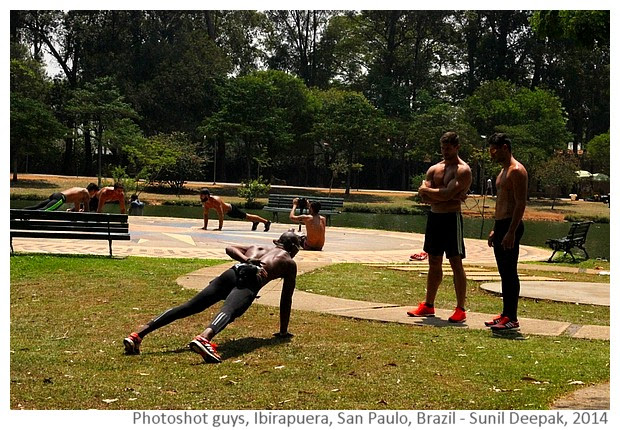 BTW, I find today's trend of showing off the underwear very funny, as you can see from the image of the two photographers below. I think that these persons do not look sexy, rather they look tacky, but I am sure that many of you like this fashion and learning about the popular underwear brands! 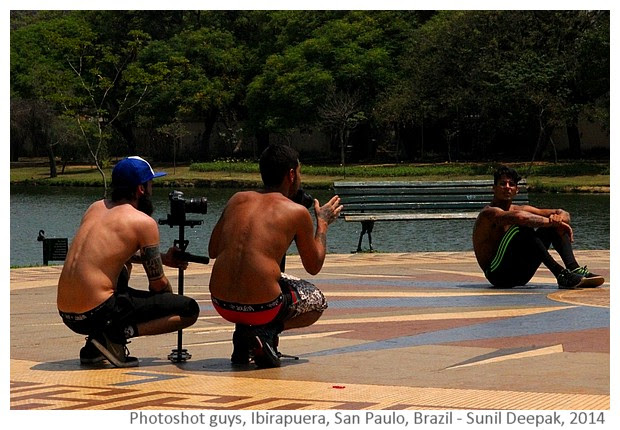 MUSEUMS AND OTHER BUILDINGS IN IBIRAPUERA

There are some covered spaces in the park full of graffiti, where young people were playing around on their skate boards.

A couple of students from San Paulo school of journalism stopped me for a video-interview about the Ibirapuera park. They explained that the video-interview was part of a project-assignment. The Ibirapuera park also hosts a planetarium, the Museum of Modern Art, the Afro-Brazilian Museum and the Ibirapuera auditorium. 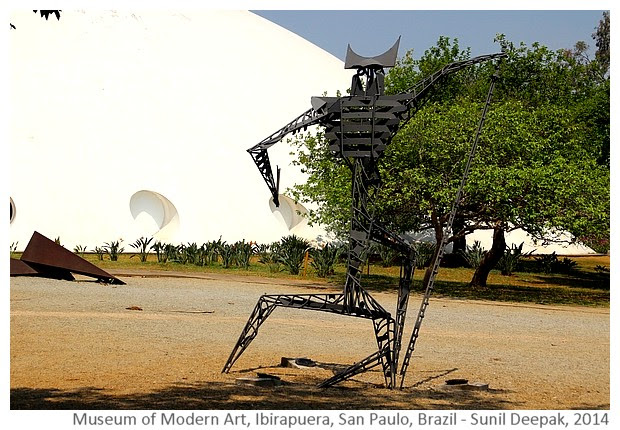 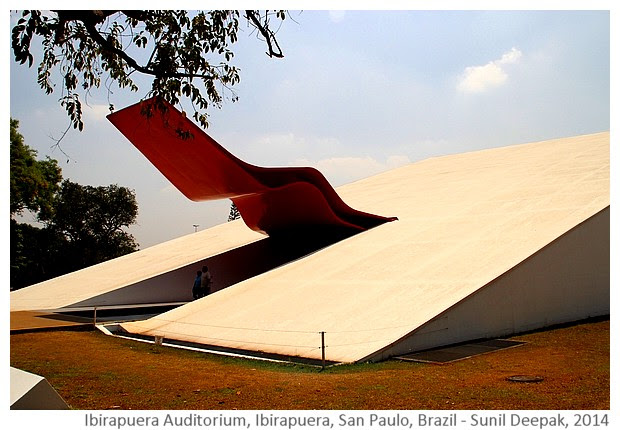 Across the road, just opposite the Ibirapuera auditorium, there was another monument that looked very interesting. However, I was running short of time and wanted to visit at least one of the museums in the park, so I did not visit this monument. Perhaps someone who knows San Paulo can tell me more about it (image below)! 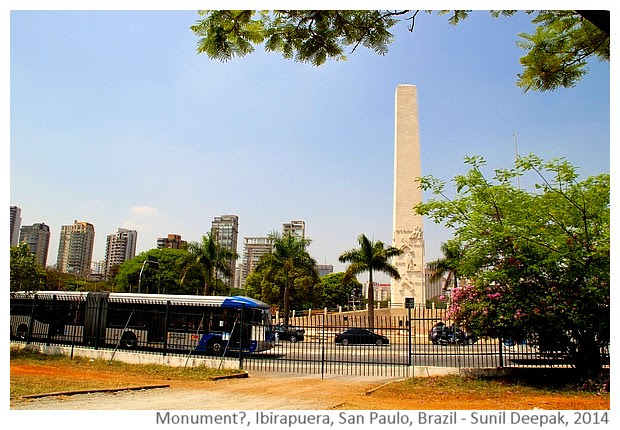 Instead, I quickly walked for a hurried tour of the Afro-Brazilian museum. It reminded me of the Manas Sanghrahalaya, the wonderful museum about tribal people of India in the city of Bhopal. As I was tired and running late, I rushed through this museum, unable to stop and look at the exhibits properly. 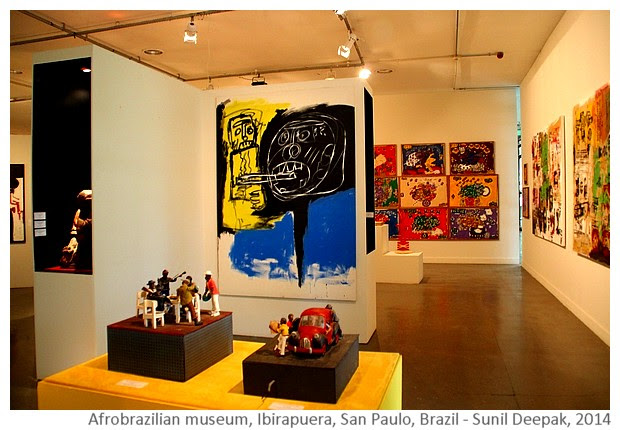 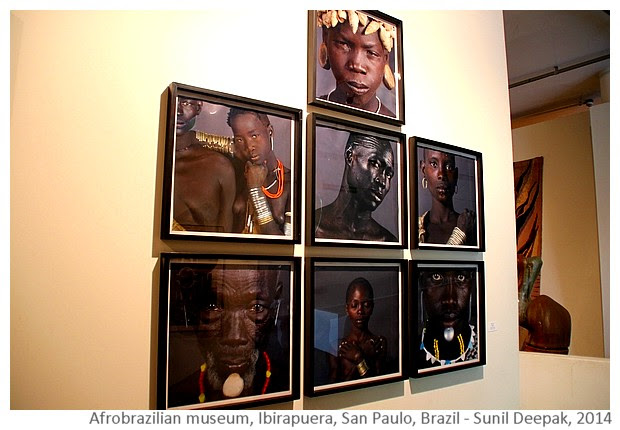 SOME OTHER SCULPTURES IN IBIRAPUERA PARK

To conclude this photo-essay here are a few images of some other sculptures from Ibirapuera park. 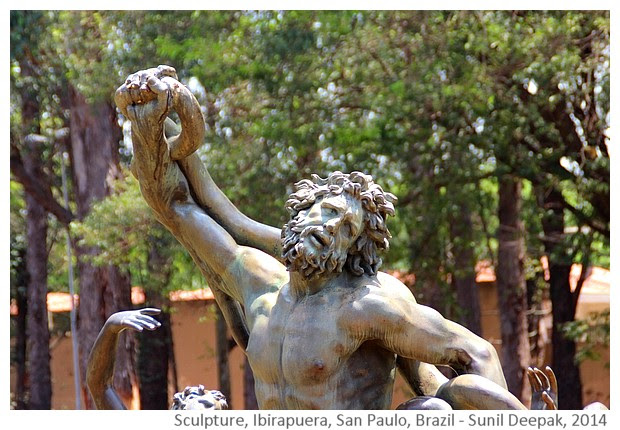 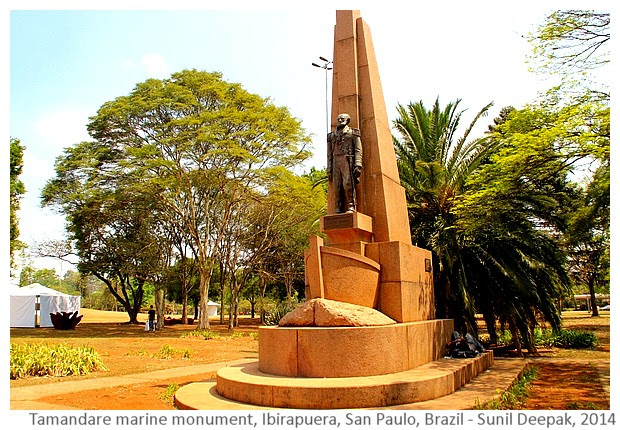 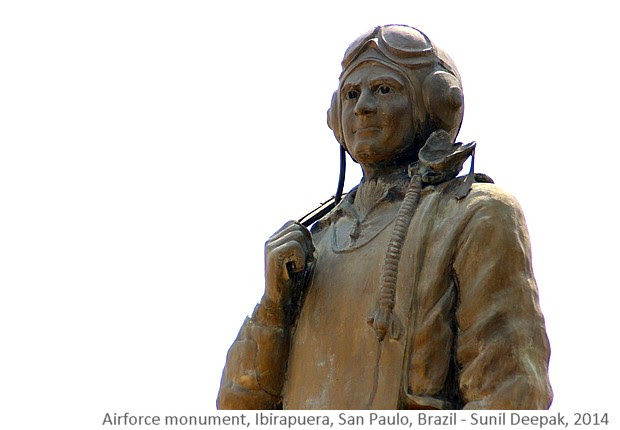 My short visit did not do complete justice to the Ibirapuera park. For example, I hardly looked at the beautiful building of the Museum of Modern Art. The park in front of this museum was hosting the biannual art show, but I had no time to look at it.

By the time I walked back to the hotel, just in time for the inauguration function of our meeting, my feet were seriously hurting me. 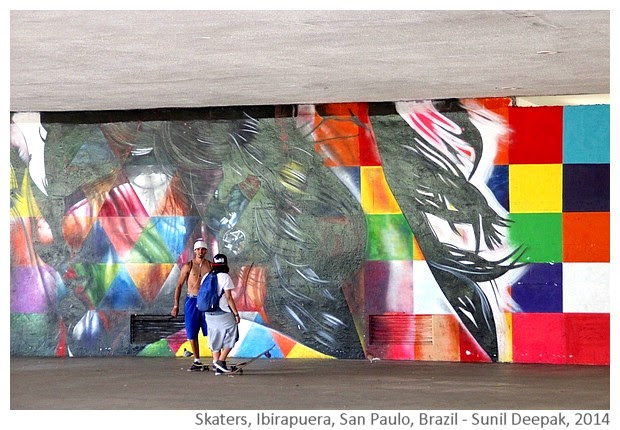 The whole walk-n-visit had taken me a little more than 4 hours. If you have more time in San Paulo, keep at least a full day to visit Ibirapuera park and its museums.

I don't know if in the last ten years San Paulo has become a more safer city or perhaps the area around Ibirapuera park is relatively safe, but I have to say that during this visit I felt safe going around as a tourist, clicking pictures without worrying out about any criminal attacks!