Theatre and films are wonderful ways to create awareness and understanding about GLBT issues. At the same time, cultural events are opportunities for persons to come out, to have fun and to be with persons who understand their issues and dilemmas. Recently I had the opportunity to witness some of the short films and theatre events organised during the Delhi International Queer Theatre and Film Festival (DIQTFF). 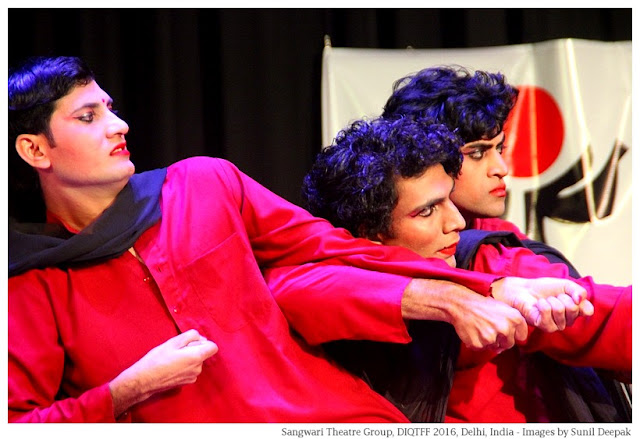 This post is about my experiences on the first day of DIQTFF. Let me start with some of the theatre performances of this festival before talking about the short films. The image above is from a performance by the Sangwari theatre group.

I had already heard about the Asmita Theatre Group of Delhi, which was founded  in 1993 by the well known theatre personality Arvind Gaur. During DIQTFF, Asmita presented different performances. I saw only one of these - Pehchan (Identity). It was led by Shilpi Marwaha.

Using a street-theatre approach, actors wearing dark blue kurtas appeared on the stage accompanied by a few drums. Short interactions between the actors followed one another in quick succession, weaving a tapestry of dialogues from daily lives around the GLBT issues. Parents talking about an effeminate child, young men talking about a gay classmate, a young woman wondering about her attraction to another woman, fears of the parents of a gay son, people commenting about transgender persons on the street, and so on. Usual casual prejudices and discriminations. 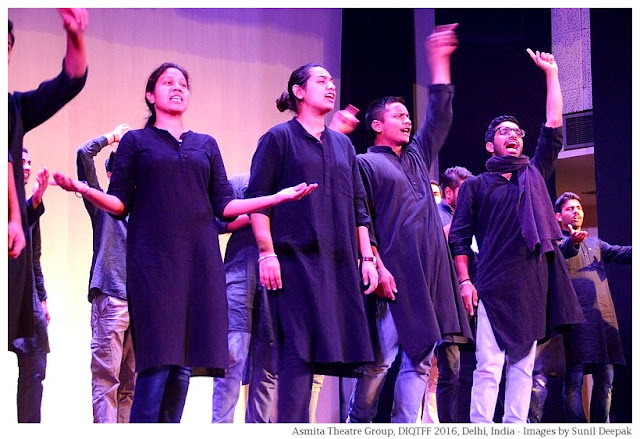 There was little time to think about the things said on the stage, as one verbal exchange led to another, signaled by a brief beat of drums. The culmination of the performance was in two moments of violence. In the first episode, a young girl had been sent to her married sister's house where her brother-in-law raped her to "cure" her attraction for another girl. In the second episode, a young man was sexually abused by his friends because he was gay and needed to be taught a lesson, while one "friend" recorded the violence on his mobile phone.

Most of the exchanges and episodes of the performance were allowed to sink in without any explanations while a few times, one of the actors provided the context and a brief explanation. For example, as the young girl was raped, another actor informed that a large number of lesbian girls face sexual violence to "cure" them of their attraction for their own sex.

It was a very effective performance, leaving me stunned and shocked. It deserved the huge appreciation and standing ovation given to it by the audience. The direct language used in the performance was very effective. I wish it can be seen by the students of all high schools and colleges.

Oxana and Layla are two artists from Berlin, Germany who are a couple in real life and complement each other in a wonderful dance and music performance. Both of them are German but have immigrants among their ancestors (One of Oxana's great grandfathers was from India).

The performance has Oxana's contemporary dance and Layla's music. Apart from a saxophone and some strange looking string instruments, Layla also uses some objects from daily life to create her music including some old newspapers and a cup of rice grains. 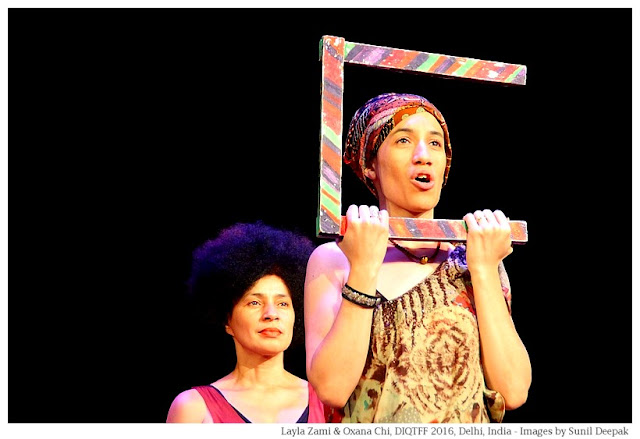 The performance was like a dream in slow motion expressing different emotions through sounds and body movements. A few years ago, during the world dance festival in Bologna (Italy) I had seen a group of Italian dancers express mental illness through their dance. Oxana and Layla's performance reminded me of that experience. Usually dance and music are seen as motion, dynamism and rhythm. However, appreciating their performance required a slowing down and focusing of attention, almost like being in meditation.

Through the loud claps and brazen gestures commonly adopted by traditional transgender persons (hijra and kinnars) in the streets in India, the performance touched on different issues by laughing at them and making the audience laugh with them, even when it talked about brutality and violence. This made the performance more poignant and effective. 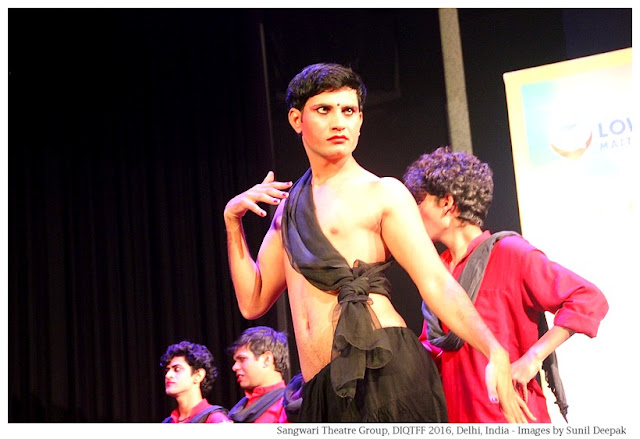 Like the performance by Asmita group, their performance was very powerful, leaving questions in my mind about human insensitivity that allows such brutal exploitation of other human beings without questioning the social norms.

Compared to the theatre performances, the short films presented on the first day of DIQTFF were less powerful and effective. Most of the short films were not made by professionals. Some of them had very poor sound quality. A few were not very exciting visually, limiting themselves to a fixed shots. Here is a brief introduction to the films shown in the festival:

Darwaze (Doors) by Aditya Joshi is about two young guys, Shashank and Komal, who come to live in a flat. Their landlord's brother Mr Kale and his wife, Mrs Sujata Kale (Sanyogita Bhave), live next door. Sujata becomes friends with the boys. One day Mr Kale discovers that the two guys are gay and live as a couple. Angry, he asks them to vacate the flat. Sujata tries to reason with her husband saying that the boys are nice guys, but Kale does not relent. "In our family we don't have such perversions," he says. (Below, a still from the film with the actors playing Sujata and Shashank). 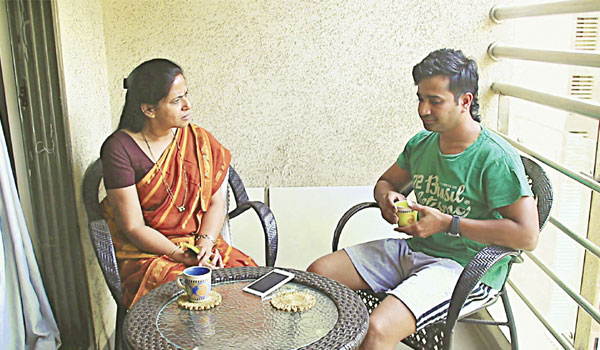 Few months later, Kale's son comes back from the hostel and has a secret to share with his parents. Kale is shocked and unable to say a word. Sujata laughs. It is a short and sweet film. The image above shows Sujata and Shashank from the film.

Khunnas (Estrangement) by Nasir Ahmed is a short film in Bengali. It is about the relationship between a man and his young son, who likes to dress up as a girl. The man does not like it when his son wants to put on make-up and dress like girls but he is also loving to the child. His girlfriend does not like the young boy and says that such boys are not accepted in the society. She tells the man that as long as he has the boy, she will not marry him. One day the man takes his son to a far away place and abandons him in a market. An eunuch takes away the crying boy. Later the man repents and goes to look for his child but can not find him.

The film is a little melodramatic, looking at the child's abandonment from father's point of view, but still makes an impact.

Satrangi by Ankit Tiwari is about homosexuality and GLBT rights as seen by different religions. Made by a group of students, it asks Hindu and Christian priests their views about GLBT issues and uses a Newslaundry video about an Islamic leader about these issues.

"In the Mood for Love" by ?? - I didn't see the tile of this film when it was shown. I am not even sure about its title, which could have been "Love My Way". I searched but could not find more information about this film. However it was one of the better films of the festival.

This film explored the personal meanings given to love in the lives of different GLBT couples. For example, one story was about a gay couple, Rishi and Bijoy. Another story was about a trans-woman Pradipta Ray who wants to be a film maker.

Five Questions by Mohit Arora is about the TV interview of a gay celebrity and the questions asked to him to explain his life choices and the secret of the mask covering his face. The image below has Mohit Arora and some other members of his team. 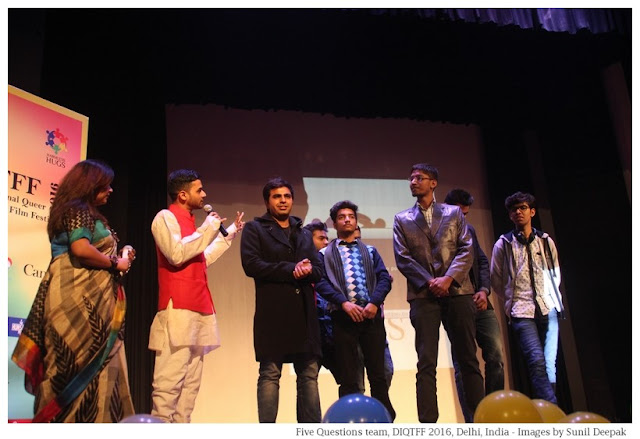 Though the quality of short films shown at DIQTFF was uneven, it was compensated by the high level of the three theatre performances. Among the performances, my vote for the most impressive performance goes to Asmita Theatre Group.

So many beautiful films on Queer themes are available on Youtube. I think that curators of DIQTFF should select and show a couple of those films in their festival. This will inspire persons in the audience as well as the young film makers to improve their work.

During DIQTFF, Sahil Verma also presented the Harmless Hugs anthology of short stories. The festival was also an occasion to present a photo-exhibition of Alok Johri, "No Conditions Apply". 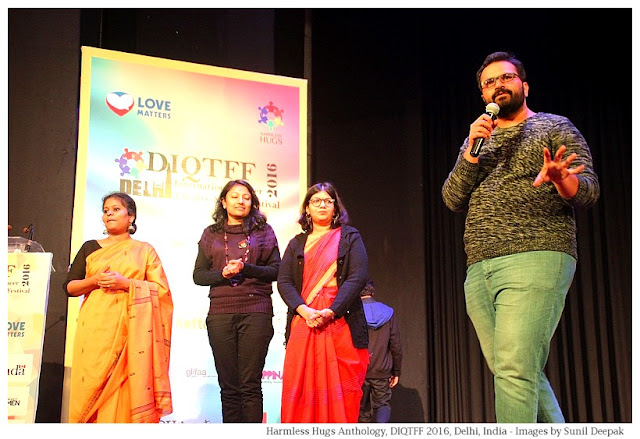 Later in the evening, well known Bollywood writer, singer and actor Piyush Mishra presented some of his poems and songs, including my personal favourite from Gangs of Wasseypur, "Ik bagal mein chand hoga".

The festival organised by Harmless Hugs was supported by Love Matters India, Impulse AIDS Health Care Foundation and many other organisations.