Bhimbethka is a place of great natural beauty. It has giant sandstone rocks, sculpted into hollows, crests, platforms and curls by the wind, rain and water. These are story-telling rocks, whispering their tales through the art of early humans. It is one of the most fascinating places that I have visited. 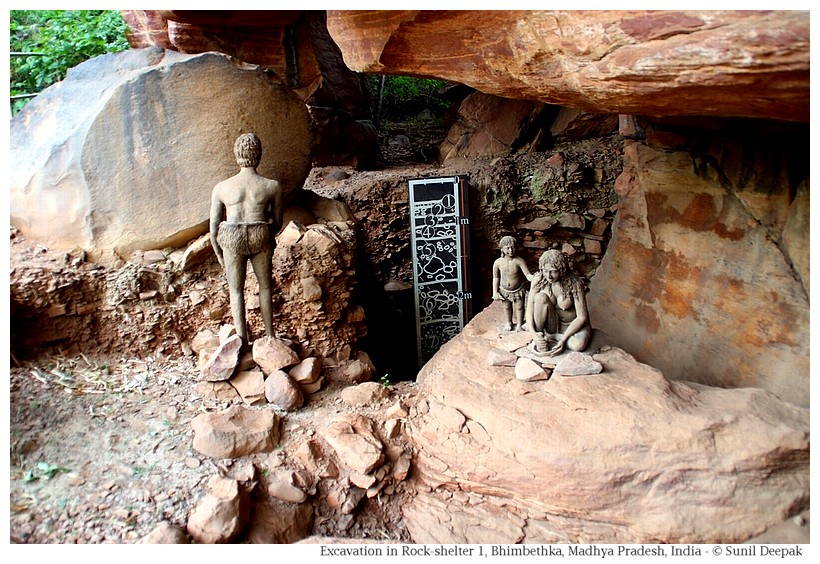 I had read about the rock-art of Bhimbethka about fifteen years ago and had immediately decided that one day I was going to visit this place. However, as often happens, life has its own compulsions and thus, I had almost forgotten about it.

A visit to the rock-art site in south-west Mozambique at Chinhampere a few years ago, had touched me deeply and had reminded me about my desire to visit Bhimbethka. Finally, a few months ago I visited it. If you are interested in human evolution and rock art of ancient humans, you will love Bhimbethka. It is located in Madhya Pradesh in the central part of India.

Rock-shelters of Bhimbetka are a World Heritage Monument of UNESCO.

The rock shelters of Bhimbethka were discovered by V. S. Wakankar in 1957. Wakankar, while passing near Bhimbethka in train was struck by the curiously shaped rocks at the top of the hill and decided to stop and visit them. 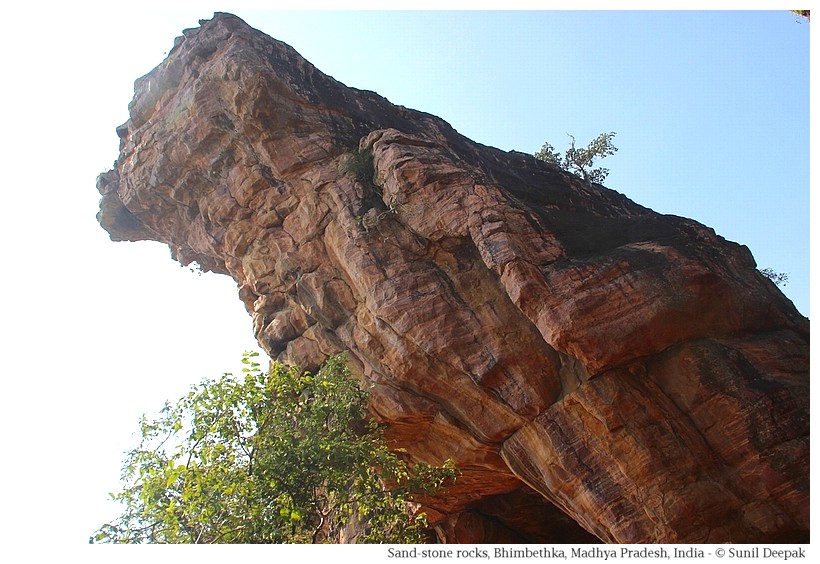 This area is 600 metres above sea level and about 100 metres above the surrounding plains of Betwa river. Here the rock shelters used by prehistoric humans are scattered over a large area spread over five different hills – Bhineka, Bhonravli, Lakhajwar est, Lakhajwar west and Bhimbethka. All together there are 243 rock shelters, out of which 133 rock-shelters have rock-art. The whole area is part of Ratapani wildlife protected area.

Only 15 rock-shelters of Bhimbethka hill are open to public.

Bhimbethka is at one hour drive from Bhopal. You can hire a taxi to visit it. If you prefer public transport, state buses can drop you at about two and half kilometres from the caves.

In his wonderful book “Indica: A Deep Natural History of The Indian Subcontinent”, Pranay Lal writes that the progenitor of Anthropoids (monkeys, apes and hominins) developed in Asia and from there spread to Africa and other parts of the world. The first human progenitor Homo habilis evolved in Africa. The standing hominid, Homo erectus arrived about 2 million years ago and then over a short period of time spread into different parts of the world including India, China and Indonesia.

Standing posture of Homo erectus resulted in anatomical changes in pelvis which affected child-birth and children being born without fully developed brains, which created social needs for ancient humans to help each other and to live in communities. They learned to use fire, could make sounds for communication and made stone tools (Acheulean stone tools). Erectus arrived in India around 1.5 million years ago. Some of big sites of Acheulean tools of Erectus in India have been found around Siwalik hills.

The first modern man, Homo sapiens evolved in East Africa around 190,000 years ago. They left Africa around 75,000 years ago and spread in different directions including some who arrived in India. For some time, Erectus and Sapiens cohabited, then Erectus gradually faded away and only Sapiens remained. There were different sub-species of Sapiens including Neanderthals. The present day humans are Homo sapiens sapiens.

The rocks of Bhimbethka are formed of sand-stone (orthoquartzite), which have been modelled by the natural forces into different shapes, which provided shelters to early humans. They are not caves and therefore called rock-shelters. Some of them are very big, more than 20 metres high.

Not very far from Bhimbethka is a tribal village, which shows the continuity of human traditions in this area.

The rock-shelters open to the tourists are located on a hill and are numbered from 1 to 15. The path between the different shelters has been paved and covers around one and half kilometres. The oldest signs of humans in these rock-shelters go back to around 100,000 years while the most recent signs belong to medieval period. 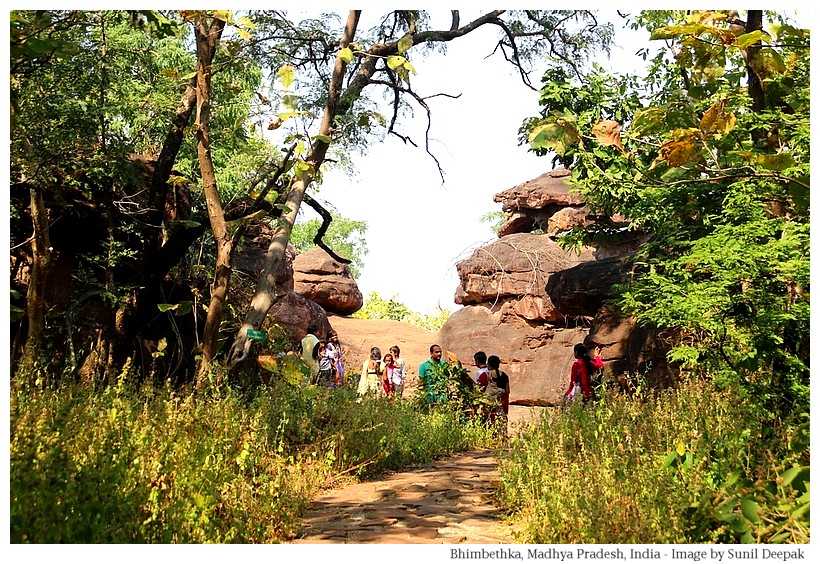 However, for the visitors to Bhimbethka, the most important signs of prehistorical humans are their paintings on the rocks made with natural elements like lime and ochre. Over the centuries, ancient humans have painted repeatedly at the same surfaces, thus more recent rock paintings overlie older paintings. In some places fifteen layers of paintings have been identified in Bhimbethka.

The paintings show mainly human and animal figures and depict scenes from hunting, wars, social and spiritual lives of persons. Trees, plants and flowers are rare in these paintings. Persons riding horses and elephants as well as battle scenes are part of more recent paintings from historical period.

THINGS TO LOOK FOR AT BHIMBETHKA

Personally, I found all the rock-shelters of Bhimbethka fascinating. There were some places where I could have spent hours looking carefully at individual paintings. However, there are some aspects that you can look for specifically during your visit:

Rock-shelter 2: It is an imposing structure shaped like an enormous cave open at the two ends and is known as the auditorium. It is 39 metres long and around 17 metres high. 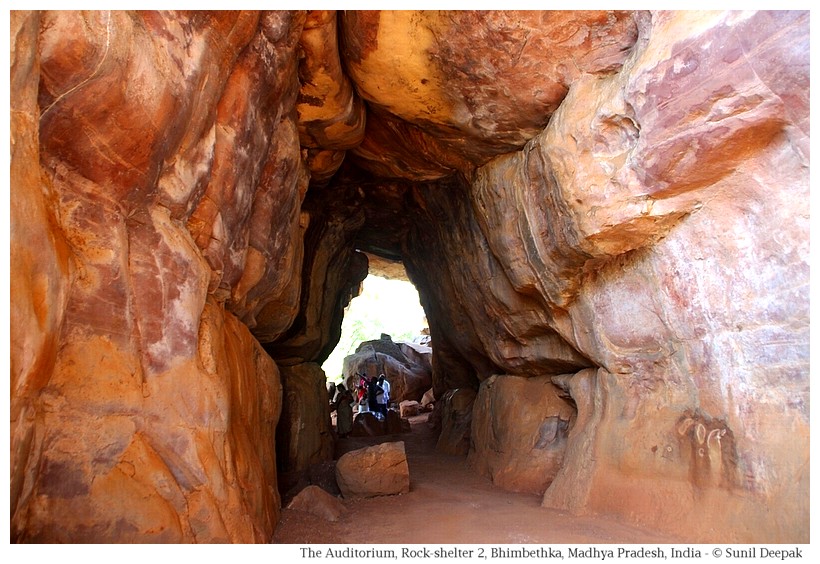 On the left at lower level it has some more recent animal and human figures. To the right and on a higher level it has different animals and birds including a peacock and the hand impression of a child. It also has some cupules from early paleolithic period. 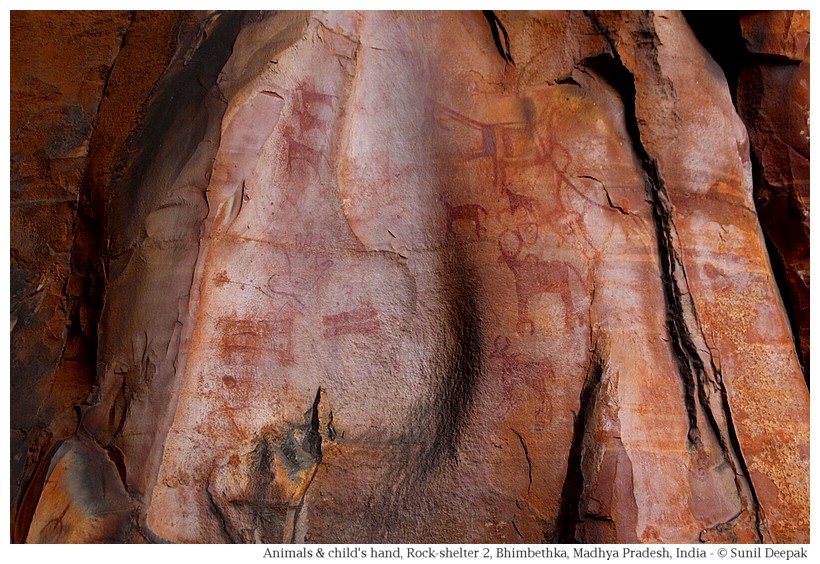 Rock-shelter 3: It has some curious round-shaped holes called Cupules cut into the rock. These are the oldest signs of human occupation in Bhimbethka and go back to 100,000 years. I think that these could have been used as storage spaces. 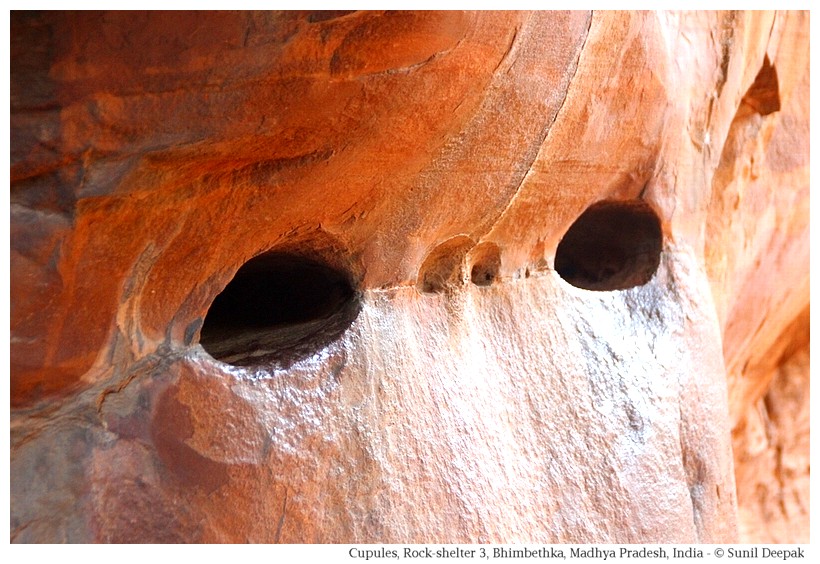 Rock-shelter 4: This shelter is called “the zoo” because its big wall is completely covered with different layers of animals painted during different epochs. There are 252 figures of animals showing 16 species of animals. In addition there are 90 human figures, 1 bird and 6 decorative designs. Rock-shelter 5: More recent paintings in this shelter depict battles and a royal procession. These are located on the right side of the wall. The procession includes people carrying swords, riding horses and wearing a head-dress. The figures include two drummers.

Why did the ancient humans paint animal figures? One of the reasons proposed for these images found in different parts of the world, is related to hunting. Painting the animals (and conducting ceremonies in front of these figures) was a way to capture the spirits of the animals so that the hunters had success in hunting them.

Rock-shelter 15: This is a very big rock and on one side near the top, it presents a fascinating fantasy scene – a giant boar like animal is chasing a small human figure and a crab. It seems to be the depiction of a mythological story. Because of this painting, it is known as Boar rock. 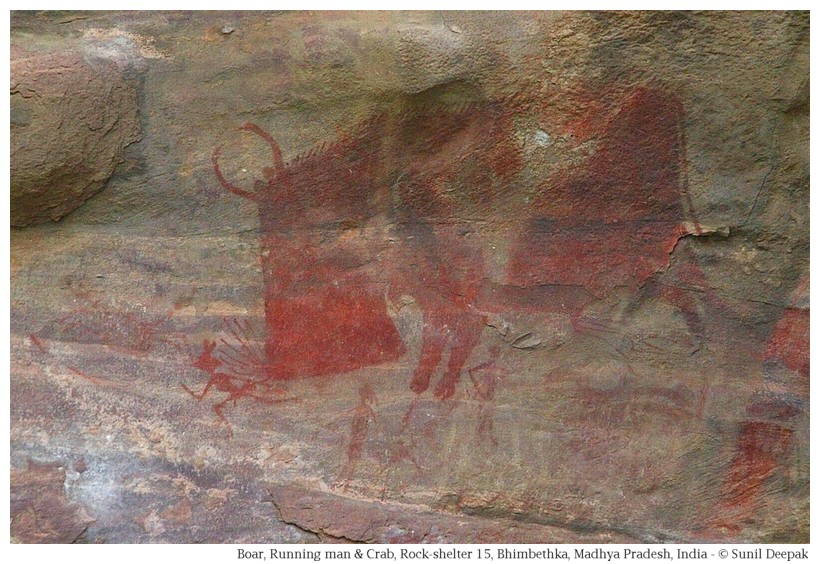 Apart from the Boar scene, there are other human and animal paintings in this rock shelter.

View Point: Around half-way into the shelters, there is a raised area with a tortoise shaped rock. From here it is possible to see the alluvial plains around Betwa river going towards Narmada river. 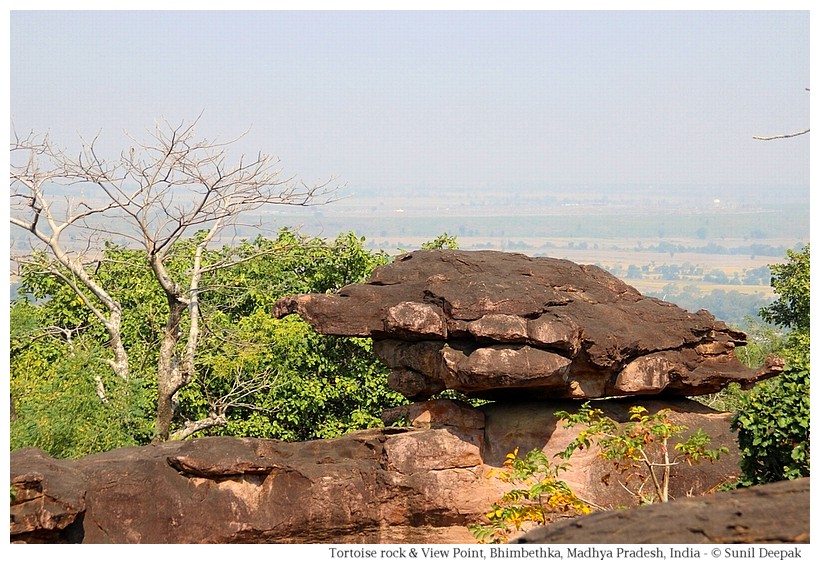 In addition, there are three springs in this area known as Ban Ganga, Gupt Ganga and Pandapur. Water from these springs is used by the adivasi (tribal) groups living in this area. Finally at the top of Bhimbethka hill is an old Shiva temple nestled in the rocks.

Bhimbethka is an incredible place. Its natural beauty is coupled with a rich cultural, historical and archaeological testimony of the human evolution in central India.

At the rock-paintings of Chinhampere in Mozambique, I had met a woman guardian of the ancient site who lived in the village below. It was not possible to visit those rock-paintings without her permission. She had also explained to me about how the village community continued to venerate those rock paintings during their annual festivals.

This continuity of the sacred relationship between the ancient rock art and traditions of local tribal people seems to missing from the areas open for visits in Bhimbethka. Nor does the site provide any information about the religious/spiritual significance of these rock-shelters to the tribal communities today.

Still it is impossible not to be moved by the art of ancient humans at Bhimbethka. The name of Bhimbethka remembers the muscular Pandav brother Bhim from Mahabharat. Local legends say that Pandavas had lived here during the 12 years of exile. 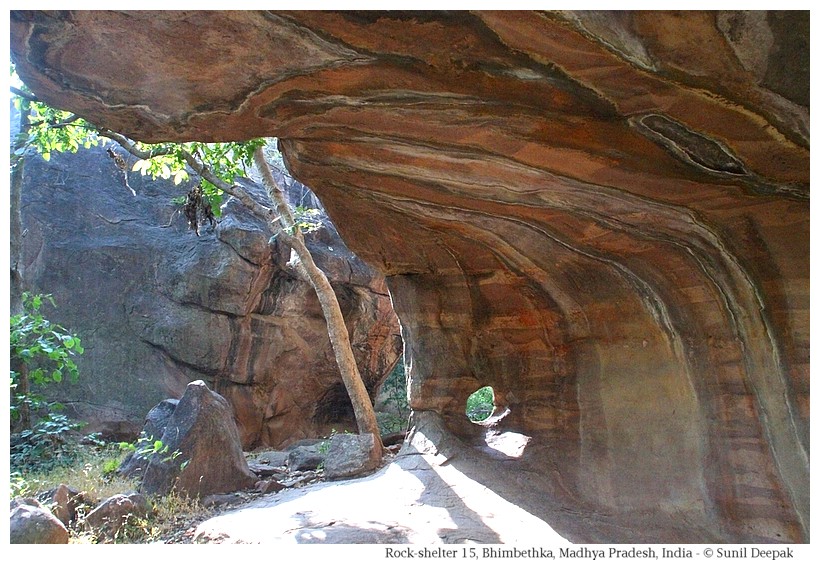 Diane Ecke in her book “India – A sacred geography” has shown how different parts of India take the sacred stories of Hinduism, add to them their local heroes, gods and legends, and make them their own. The legends of Bhima and the names of the three springs, Ban Ganga, Gupt Ganga and Pandapur, seem to follow this norm.

My interest in ancient humans and their lives was stimulated by the series of books called Earth’s Children by Jean M. Auel in the 1980s and 1990s. If you have not read them, do read them. They will give you a glimpse of the lives of early humans.

I also recommend Pranay Lal’s new book – “Indica: A Deep Natural History of The Indian Subcontinent”. It is an enjoyable read, full of information about geological, archaeological and biological finds in India.