An afternoon discovering Nagaon in Assam

Nagaon is a tiny sleepy town in Assam. I visited it some time back for work. I remember it because it gave me an opportunity to observe the traditional Assamese fishing in Kolong river. 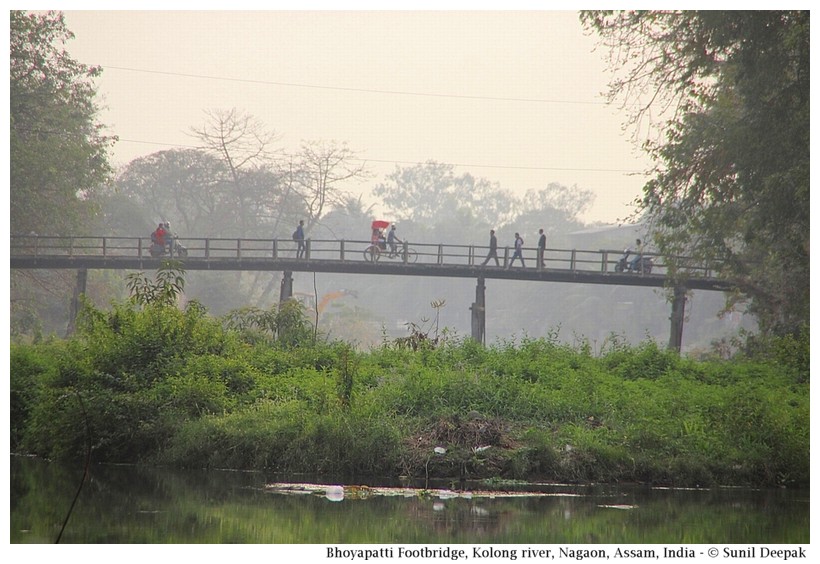 The image above shows the Bhoyapatty footbridge on the Kolong river on a misty evening in Nagaon.

The little town of Nagaon, 94 km to the north-east of Guwahati in Assam, is known as the birthplace of Shrimanta Shanker Dev, a sixteenth century social and religious reformer who had a profound impact on Assamese people and culture. Actually Shanker Dev was born in Bordowa, about 17 km from Nagaon.

Kolong river passes through the city centre of Nagaon, and is a tributary of Brahmaputra river. 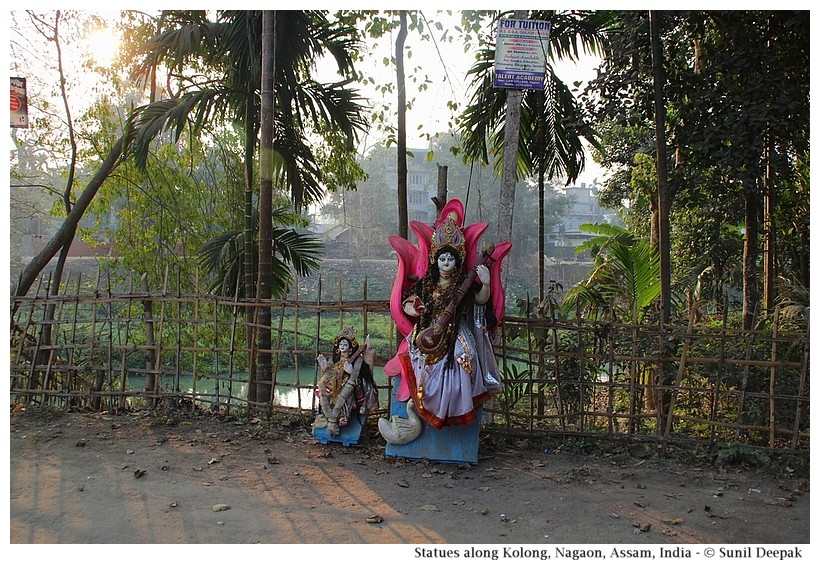 Reaching Nagaon is easy. Apart from the state buses, there are numerous private jeeps and vans starting from Khanapara in Guwahati and going to Nagaon. A.T. road, an important artery of transport in Assam, coming from Guwahati, passes through Nagaon.

I was in Nagaon for some work for just one day.

A Walk Along Kalong River

When I reached Nagaon, it was late afternoon. I found a hotel off the state highway 18, near the city bus stand. It was close to a footbridge on Kolong river, which went towards the Nowgaon Law College.

Online search about places to see in Nagaon did not provide any information. All the places to visit were outside the city, in the district or in the nearby areas - such as Kaziranga wildlife sanctuary, Laokhowa wildlife sanctuary, Chapanalla pond, Bordowa (birth place of Srimanta Shanker Dev) and Madhabthan (birthplace of Madhab Dev, a follower of Shrimanta Shanker Dev).

My work appointment was for the next day morning and I was free that afternoon. However, I was tired from the journey, and did not want to do anything tiring. Thus, I decided to take a slow walk along the Kolong river and discover a part of Nagaon town.

Close to the river there was a Naamghar, a Vaishnav praying place for the followers of Shrimanta Shanker Dev. Inside there were no statues. Instead the people prayed in front of the sacred book, Bhagwat Puran, which tells the story of Krishna. The book was kept in the centre of the temple, at the top of a pyramid like structure and lamps were lighted in front of it. 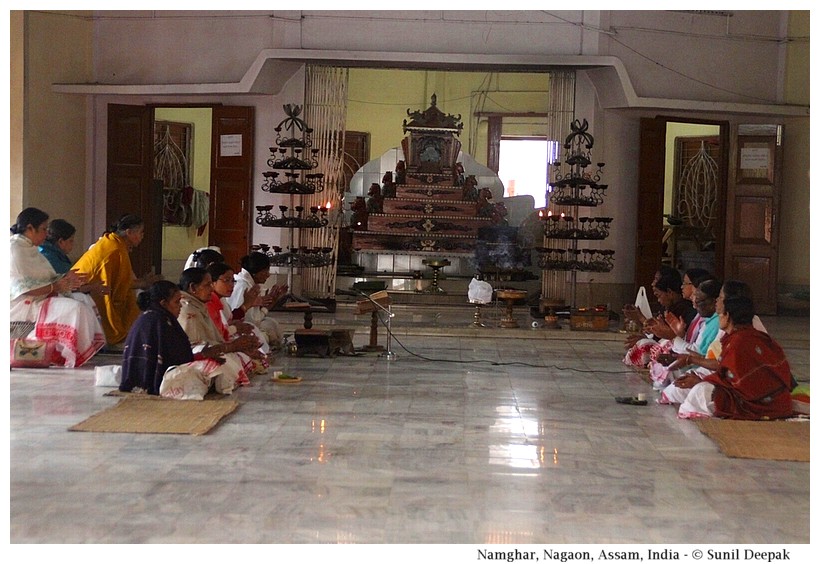 After visiting the Naamghar, I got on the footbridge over the river. From there I saw a man fixing a fishing net in the river. Such fishing nets, placed in rivers, lakes and ponds are a common sight in Assam. It was the first time I was seeing someone actually making the whole structure, so I walked along the river bank to look at it from close.

Fixing the net looked complicated. There were about a dozen bamboo poles that had to be arranged in such a way to create a cantilever mechanism in which two bamboo poles were tied at one end, while their other ends diverged to create a wide arc. These two poles were linked to a whole system of supporting bamboo poles, so that putting a weight at the tied end of the cantilever bamboos, raised up the divergent end, while removing the weight, brought down the divergent end to just below the water surface. 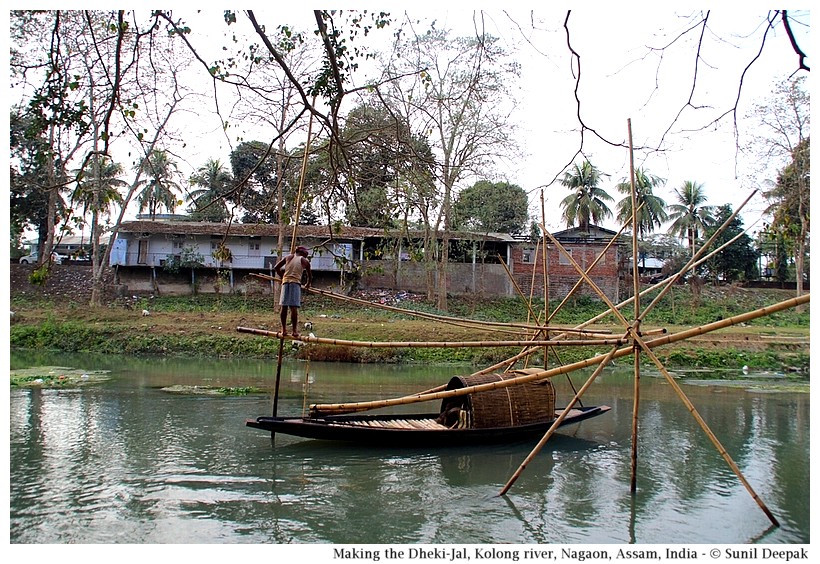 After fixing the poles, the fisherman fixed the fishing net to the diverging part of the bamboos and then lowered the net in the water. He was clearly an expert at making this fishing net, deftly balancing the poles into position and then fixing them without any help. The whole thing took him almost two hours of work. 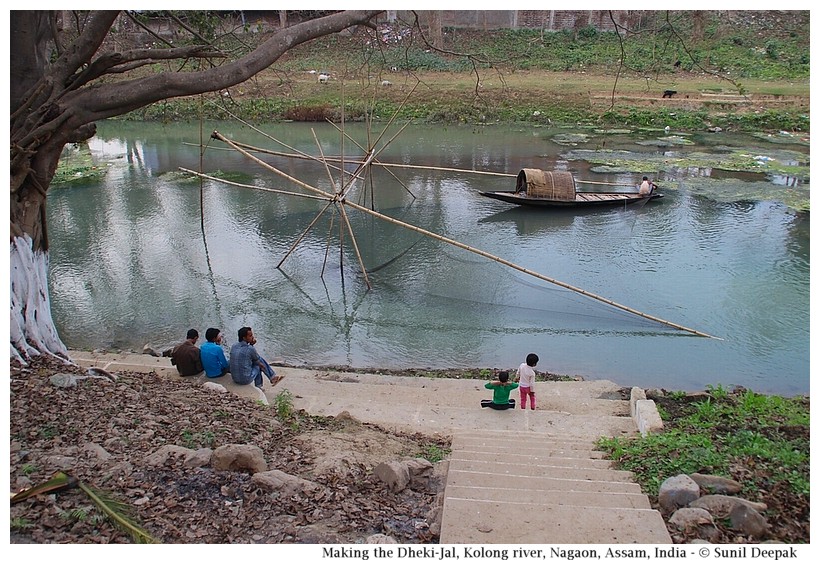 He told me that that he had been doing this kind of fishing ever since he was 14 years old. He also explained that this was called the Dheki jal.

I have seen similar cantilever nets in the sea in Kochi (Kerala), where they are called the Chinese nets. The principle for making them seems to be same, though they remain fixed in one place while the net made by this fisherman was temporary. Every few days, he moved to another place, leaving the river and the fishes to regenerate.

I was really happy that I could witness the setting up of the traditional Dheki-jal. By the time, he had finished, it was already evening. I walked back to the footbridge and resumed my walk. Below me, I could see the fisherman's boat gently bobbling on the Kolong waters. 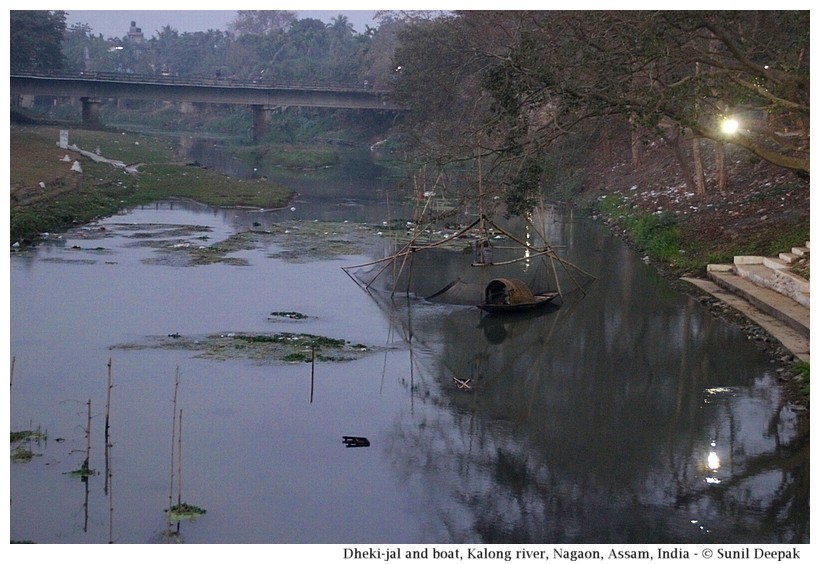 Back to the walk along Kolong river

After crossing the footbridge to the northern bank of Kolong, I continued my walk along it till the Bhoyapatti footbridge and then went back to the southern bank of the river. Close to the river was a Hanuman temple with a "chimaeras" or a Bahurupi statue of Hanuman, where a priest was conducting an evening prayer (Aarti). 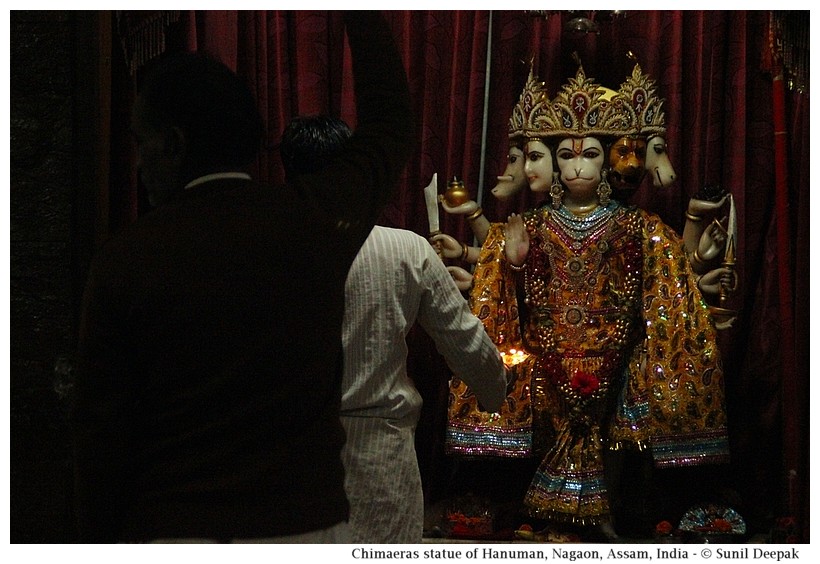 Chimaeras is a mythical animal composed of different parts of animals and birds. One of the earliest examples of chimaeras in India is on an Indus Valley seal. One of my Italian friends who has been involved in excavations of some Indus Valley sites, uses the term "chimaeras" for Navagunjara-rupa of Krishna in Bhagwat Gita. I thought that showing Hanuman with different faces has the same concept and that is why I am calling it "chimaeras" statue of Hanuman. 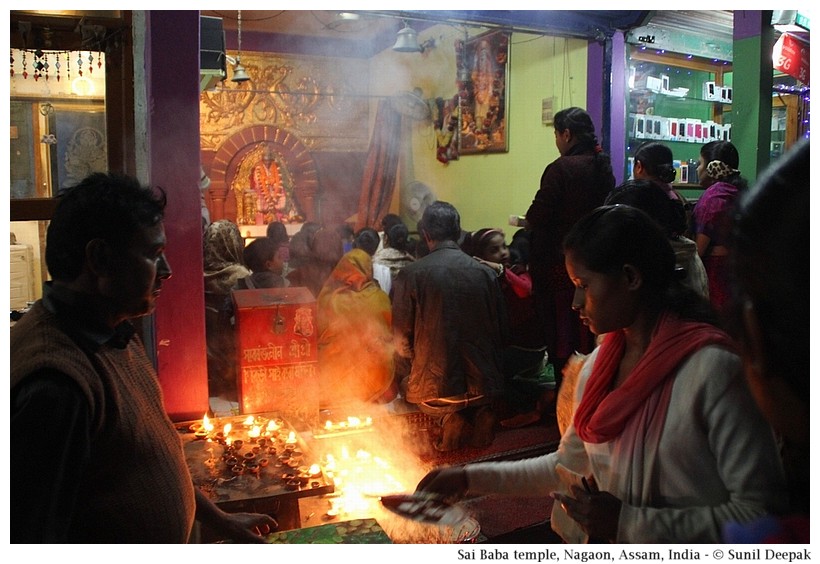 From the Sai Baba temple, I walked back to my hotel.

Next day morning, I took an auto-rickshaw for Panigaon chariali on the AT road to visit the Shrimanta Shanker Dev Mission. With an eye hospital, a hostel for blind children, a disability centre for the distribution of technical appliances, a leprosy centre, an anganwadi training centre and many more activities, the Mission was a very active place. 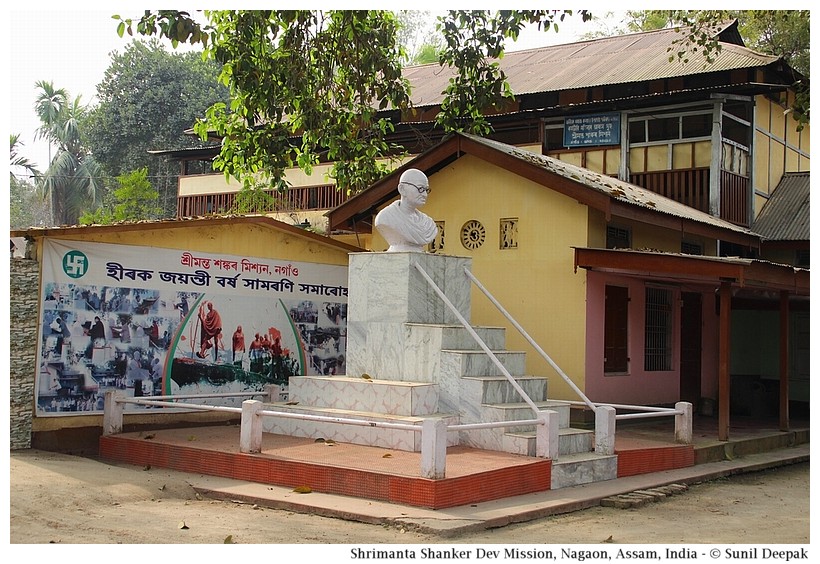 After discussions with the persons looking after the disability centre of the Mission, it was time for me to leave Nagaon.

It was a short visit and for me, the most memorable part of it was the time spent near the river to see the construction of the traditional Dheki Jal. 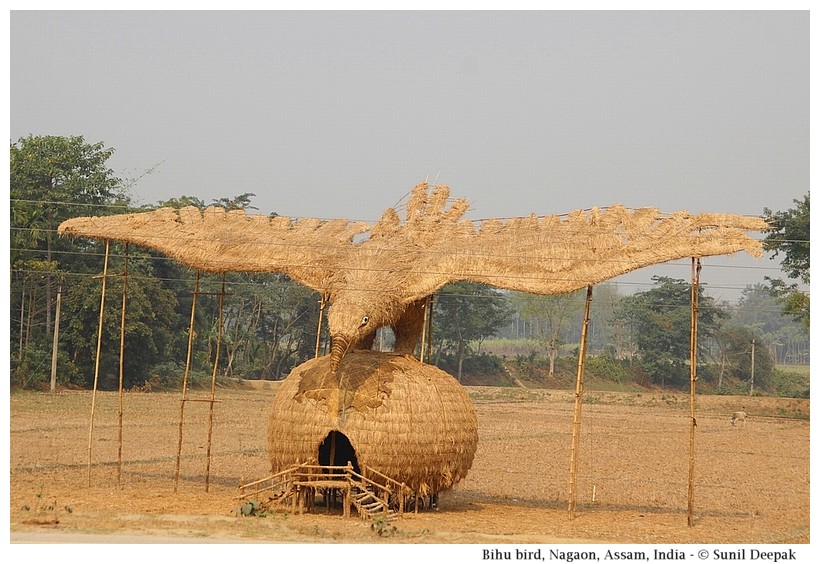 Let me conclude this post with an image of a giant sculpture of a bird made from straw in a field near Nagaon. Such straw sculptures are built as part of the celebrations of Bihu, a traditional Assamese festival.