Europe provides a lot of opportunities for admiring sculptures and art in public spaces. They can be memorial statues of famous persons such as kings, leaders, artists and scientists. They can be commemorative statues to remember specific events from countries' or cities' histories. They can be expressions of symbolic ideas or an expression of peoples' wealth and linked to specific buildings. They can also be artworks and cultural expressions used for beautification.

In this post I want to share 16 of my favourite images of sculptures of female forms from Vienna in Austria.

Starting from medieval period, Vienna gradually became a rich city - it was the capital of Austrian-Hungarian empire and a trade hub for commerce between western and eastern Europe. As it lacked the ruins, history and culture of  ancient Greek and Roman civilisations, over the past couple of centuries, the city asked artists to create works that represent those ancient civilisations. Late Gothic and Baroque styles are thus most prominently visible in Vienna. Most of the images presented in this post show sculptures in these two styles.

The first four images present sculptures of women from different groups of statues remembering or celebrating famous  men - persons like Ferdinand Raimund, Johann Andreas von Liebenberg and Johannes Brahms. The first one has an angel with butterfly wings and a star on her forehead. I like the playful expression on her face. 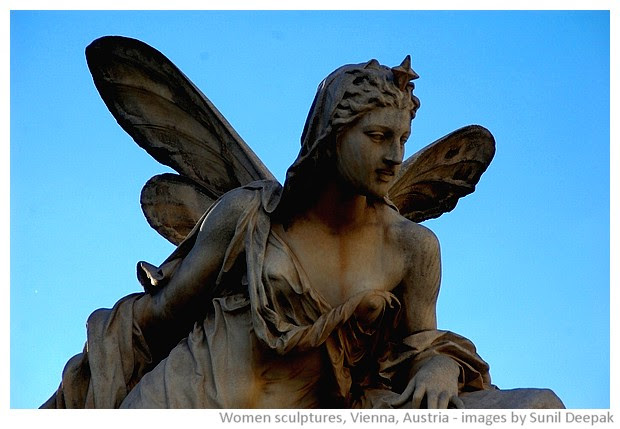 The next one is also an angel, but with more classic angelic wings and a serious face. She holds in her hand a victory wreath. 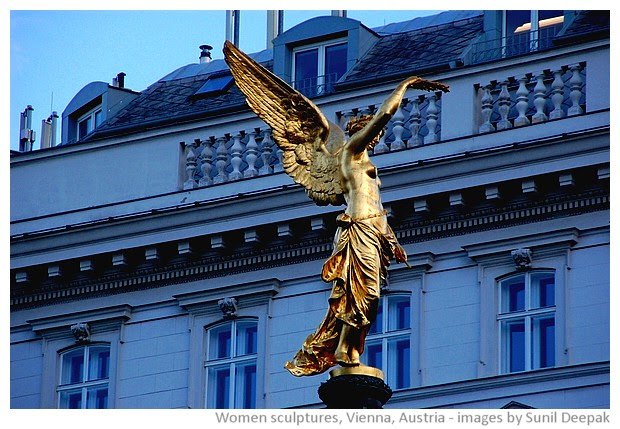 I especially like the next image from the famous music composer Johannes Brahms' memorial. The woman in this sculpture has one hand on a broken lyre. However, for me the beauty of this sculpture is in the cracks that seem to symbolise death and decay. 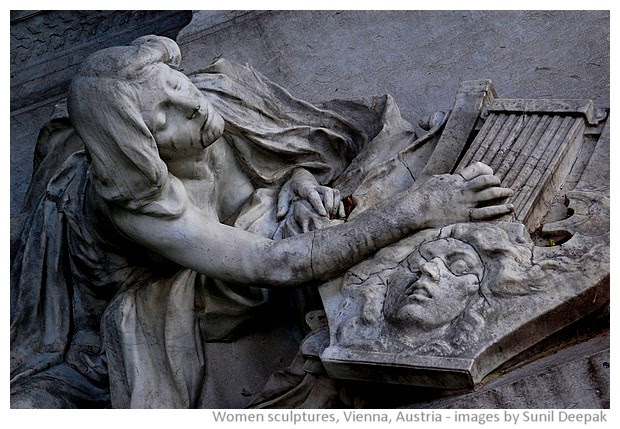 Finally this last statue in bronze of a sitting woman, has nice green-effects due to oxidation, and seems to be holding a branch of olive, probably to symbolise peace. 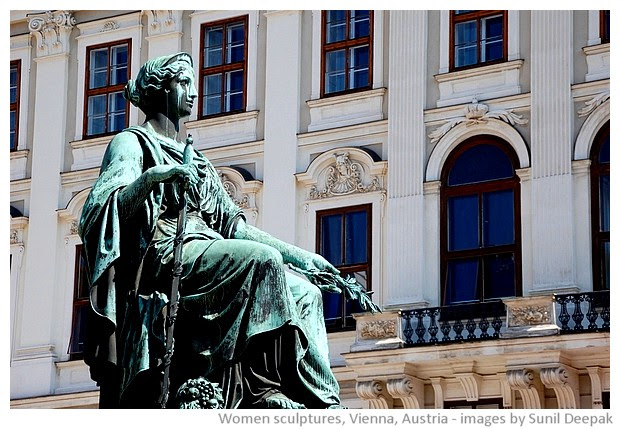 The next image shows the only statue commemorating a powerful woman - Maria Theresia from 18th century (her titles were: Archduchess of Austria, King of Hungary and Queen of Bohemia) and thus, it is also the only statue of a woman in this group of images, who is not young and beautiful.

The world is controlled by men and it is men who take decisions about the statues in public spaces. Thus statues commemorating persons are usually of men, where women are supporting figures and are selected for the male gaze. In fact, if you look at the women in the sculptures shown in all the other images of this post, you will see that they are all young and beautiful looking. 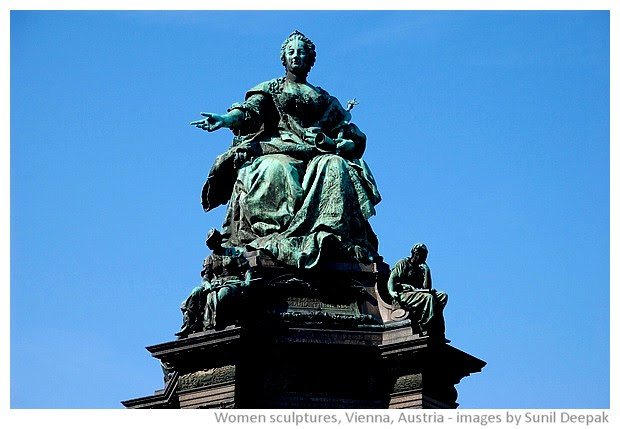 The next five images have women used as a symbol to express a concept such as victory or justice. The first two are from the parliament building. The first one is a little kitsch with lot of gold-plating including an angel holding a victory wreath. Though Austrians call their country "fatherland", I feel that this statue probably denotes Austria (or may be, it is democracy? or law and order?) The next image has a half-woman and half feline mythological figure with wings, that brings to mind the sphinx from Egypt. 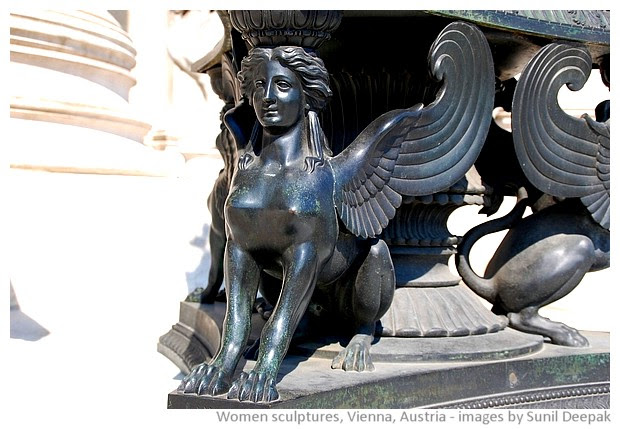 The next two images of sculptures are from the opera house, where Mozart used to work and perform. The sculptures are in renaissance style and probably depict virtues such as shyness, purity and destiny. 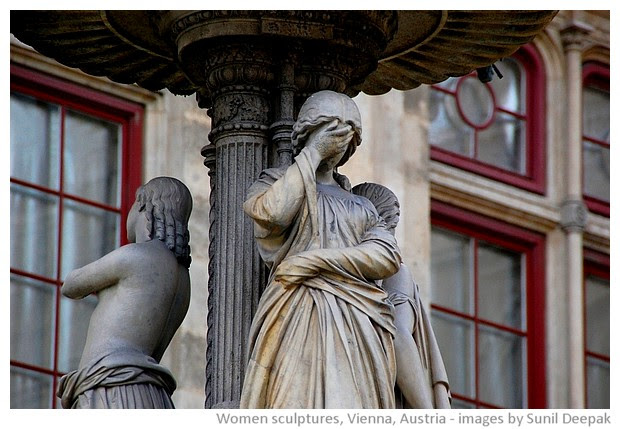 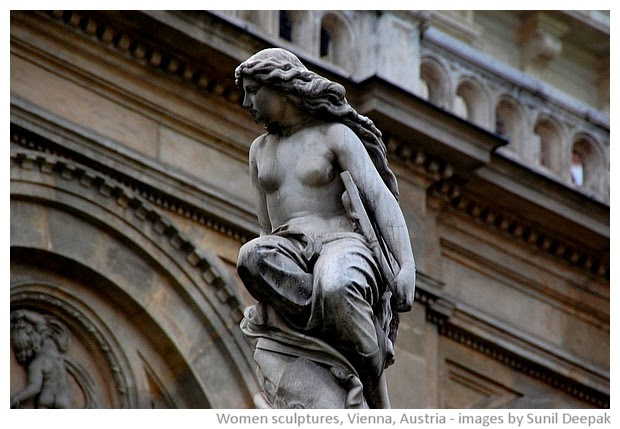 The next image is from Schonberg residence of the king and is in classical Greek style with a Greek mythological figure (may be a forest godess or a hunting godess, with a dead deer at her feet). 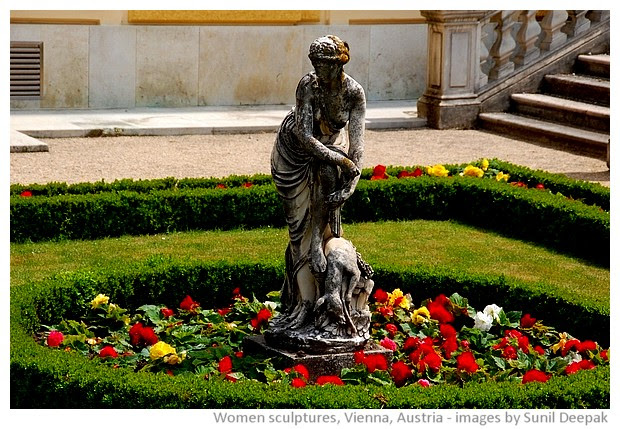 The next two images are also symbolic and both have women with a snake. When I saw them, my first thought was that these were figures inspired by the Adam and Eve story of the Bible, where the snake represents the temptation, while the discovery of sexuality is represented by the apple. These representations often show Adam as the personification of innocence, while Eve is shown as the temptress holding the snake or the apple in her hand and thus causing Adam's fall from the heaven. This identification of woman as the negative influence on men and thus, whose body must be covered and hidden, and who should be controlled by the men, is common in conservative groups of different religions. 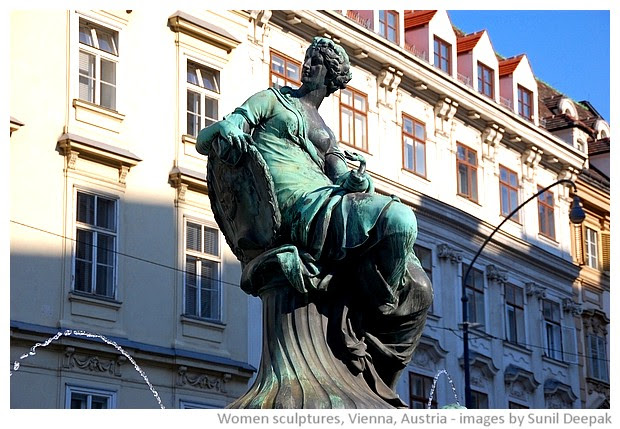 This next sculpture also reminded me of stories of nag-panchami in India, when you are supposed to offer milk to snakes. Women and snakes were together part of many other mythologies - like Echidna, the half-snake and half human figure from the Greek mythology and Ichchadhari nagin (woman who turns into a snake at night) in the Indian mythology. These statues also reminded me of the Cleopatra story, who had committed suicide by getting herself bitten by a poisonous snake.

Stories of snake-woman can be seen as old superstitions. In psychological terms they can also be seen as expression of suppressed emotions linked to jealousy or sexuality. (If you can read Hindi, I suggest you to read Archana Verma's analysis of Indian writer Premchand's story "Nagpuja" on the theme of snake-woman.)

The next two images are about the female figures in art. The first figure is the often represented ideal of "woman as a mother". 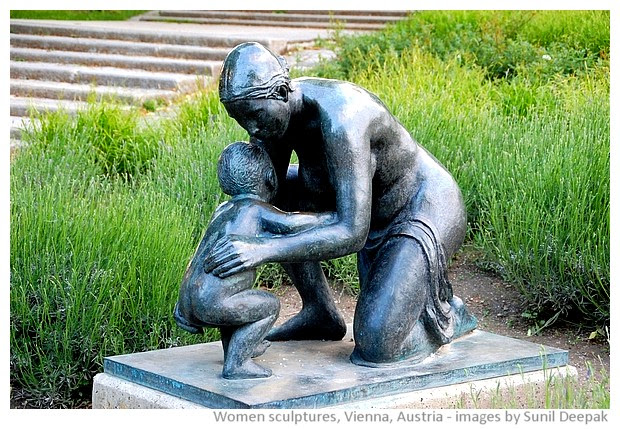 The second figure is that of the baby girl Maggie Simpson with her milk bottle from the well known animated films of the Simpson family. 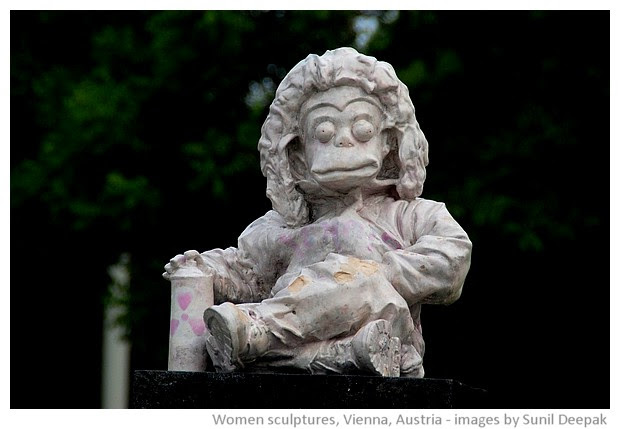 Finally, the last two images of this collection are about women used as columns to support doors or windows. Using female figures as columns is an ancient practice and such figures are called Caryatids. Perhaps the most famous example of caryatids is from a temple in ancient acropolis in Athens (Greece). 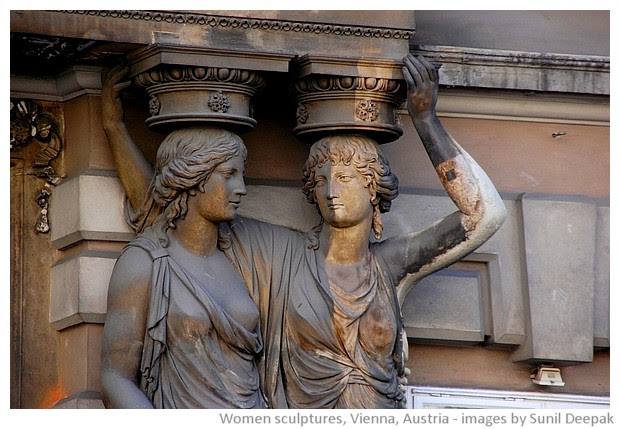 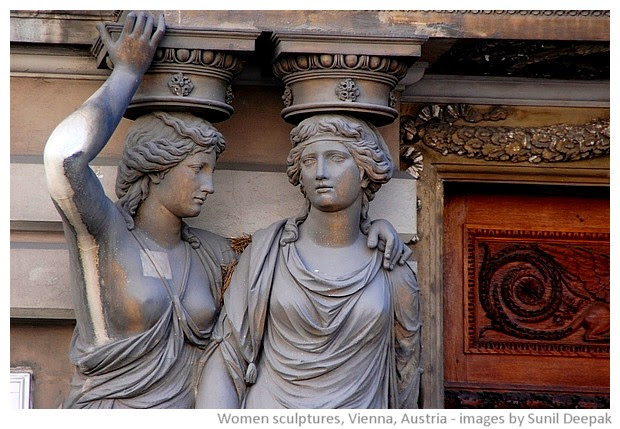 I love these two images very much. Though they are also made in the Greek style, they represent working class women in their daily lives. At the same time, they show women who are friends, and who share an easy intimacy. Normally caryatids show young women striking poses to show off their bodies, like most other public sculptures of women. These two images instead have everyday women who seem to be together in their own worlds and who are not on display for others.

So which of these images do you like most?