My dog’s Contribution to My Photography 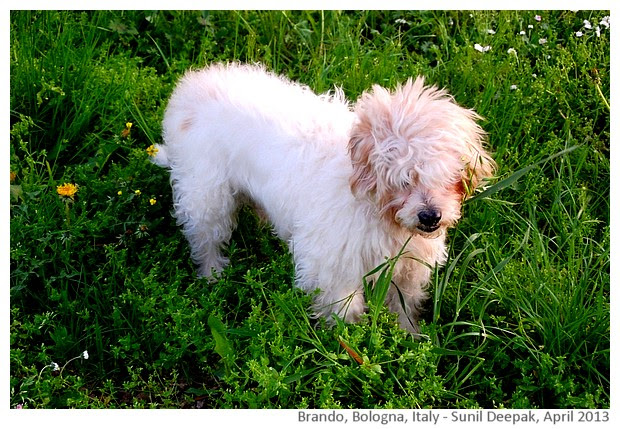 Brando, our dog for 18 years, died last month. I still miss him. Looking at the corner where he used to sit and sleep, brings a lump to my throat. His pictures make me feel like crying. I have talked to other persons who had dogs and who tell me that after so many years, how much they still miss their pets.

If you live in an apartment, like we do, and if you have a dog, you need to take him/her out every day, at least two times, but sometimes even more. Taking out Brando for a walk in the mornings and evenings, was my responsibility. That is where he taught me things that were so important for photography.

If you like taking long walks, when you start going out with your dog, you learn that your dog has his/her own ideas about the walk and often they do not coincide with your ideas of taking walks.

While walking, we humans usually want to walk and at the same time, talk to friends or talk on telephone or listen to music on walkman or Ipod or even day dream. Dogs are not interested in only walking, they want to stop, follow the smells, bark or say hello to other dogs, run after cats, pigeons and rabbits, and mark their territories by leaving small amounts of their pee on the plants and trees. Some times, if they like the smells, especially when the bitches are in heat, the male dogs become difficult to control and they can stay in the same place for a long time with their nose buried in some place where they can smell some chemicals.

When Brando stopped somewhere for any reason, if I tried to pull him, it usually provoked an indignant reaction. He usually gave me an annoyed look and pointed his feet at that place. Though he was a small dog, in such moments, it was impossible for me to pull him and make him move even an inch. It made me think about that episode from Ramayan where Angad, the monkey cousin of Hanuman, goes to the demon king’s court and challenges him to try to move his foot.

So whenever Brando did his Angad ji act, I learned that it was better to relax and look around rather than trying to pull him and getting agitated for nothing.

Have you ever just stood in a place in a park or on the roadside, relaxed, doing nothing and just looking around? Right from the time when electricity was invented and people started remaining awake during the night, we humans have continued to invent new things to make ourselves run faster through our lives.

Doing nothing and relaxing is almost a deadly sin or at least, an anxiety laden pleasure, to be hidden behind words like “Actually I was thinking about a complex problem!” And while you stand near your dog, waiting for him/her to finish doing whatever dogs do, joggers and walkers, go past you looking at you with pity. 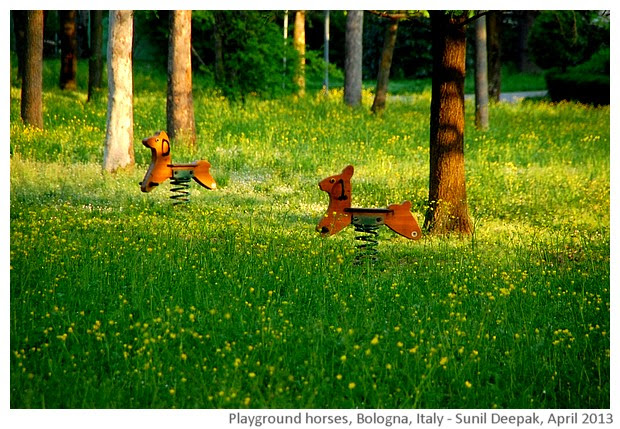 So while I waited, I observed the patterns in the barks of the trees, the way their branches divided, the way their leaves moved in the wind. I looked at the flowers, bees, grass and birds. Profound thoughts came to me like the realization that our language is a rough approximation of the reality. For example, I could see so many different varieties of pink coloured flowers, and each had a different shade of pink. In this case “pink” was an approximation to speak of all those different shades of colours that we call pink and that our language can not specify.

All this had happened before I had a digital camera. So I had started buying books about plants, trees and birds. I looked at trees and plants in the park and learned to identify them. I also started to stop and really look at things, at times wonder-struck at the infinite variety of life all around us. Thus, there came a time, when Brando wanted to walk, while I wanted to stand and look at things, so now he pulled me while I tried unsuccessfully, to be Angad ji.

This lesson of not taking the world for granted and to actually look at everything around us, was the most important lesson for my photography. Afterwards, when I got my digital camera, I discovered my passion while passing hours peering at wild flowers, the changing shades of colours of the grass, and the patterns made by the wind in the fields.

Normally we go out for a walk or a tourist visit when the weather is good. Rain, hot winds, freezing cold and snow storms are not meant for going out but for staying at home, possibly with air-conditioning. However, it does not matter which season is it and how terrible it is to be outside, your dog needs to be taken out at his usual time everyday. 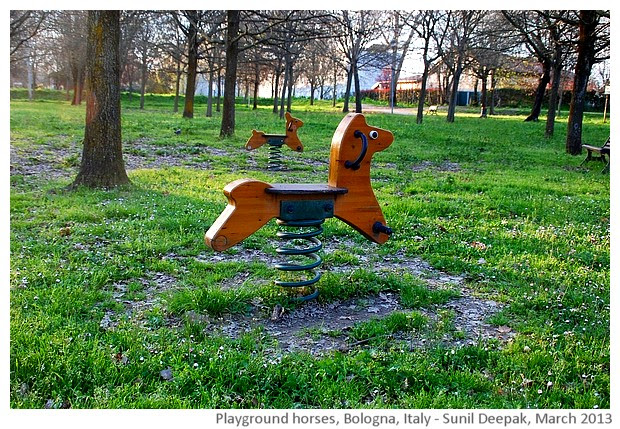 There were mornings after snowfalls, when the paths in the park were covered with a sheet of frozen ice, and walking on it was like a drunk trying to cross a narrow bridge, constantly afraid of tipping down in the river below. Brando went on unconcerned, some times pulling me suddenly when he saw something interesting and making me crash down. The good thing about it was that mostly I was alone or at the most there were other dog-owners like me, who did not laugh at me, while they tried to hold me to their dogs.

There were other days with terrible heat and a sensation of oppression, when it was difficult to breathe. Some days had gales and monsoon like rain. Others had cold wind that knifed across my fur jacket and stabbed straight at my heart. I went out with Brando on all those days because there was no alternative.

And I discovered that the world changed with seasons. I could see the tiny changes everyday as the first leaves and first buds came out and slowly grew, till one day the leafless trees standing like dark skeletons, were suddenly covered with green leaves and bending down with flowers or the flowers falling down covered the ground like a carpet. 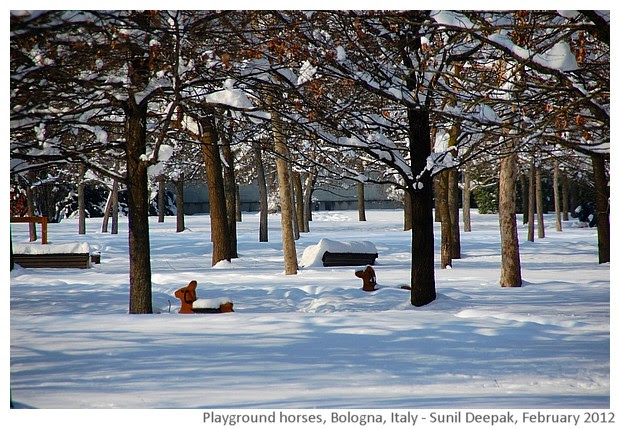 Looking at the world in the early morning light of a foggy winter day or in the evening of a windless hot summer day, created an intimacy with nature that is impossible if you only go out for leisurely walks in good weather. Looking around those familiar and yet strange worlds was another important lesson for my photography. You do not need to go out to far away places to take pictures, you can discover the strange worlds all around you. 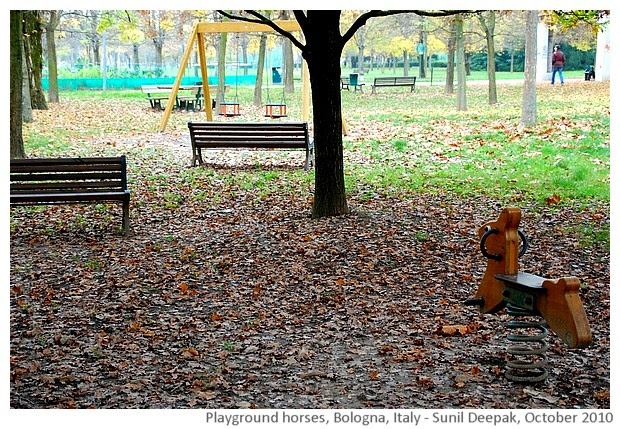 There are so many other things that Brando had influenced, like the possibility of saying hello to unknown persons. Saying hello to other dog owners, persons with small children who wanted to touch Brando and know his name, and even strangers, was so much easier. Now, without him, I will be back to my usual reserved self, finding it more difficult to talk to people I do not know. But the lessons he gave me about the nature and the way I look at the world, they will continue to be with me, as long as I will take pictures with my digital camera!

The pictures I have used with this post are from the park where I used to go for walks with Brando and show the wood horses in the children's playground during different seasons.