Fifty Shades of Green in Munnar

Munnar in Kerala with its gently rolling hills covered with rolling mists and neat rows of tea-plants is one of the most beautiful places in India. Recently I was there for a short holiday, recovering from an intensive Ayurvedic treatment. I have come back enchanted from this visit. 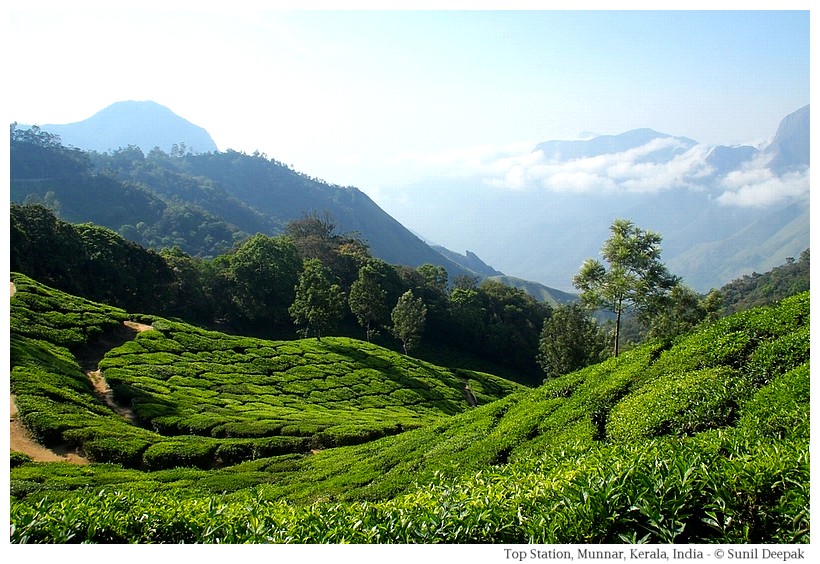 The infinite hues of green cut into squares and arranged in neat rows of the tea gardens draped over the hills and valleys are always the same and yet different, every time a source of joy and wonder.

During British colonial period, Munnar was a part of the Travancore estate. At that time it was mainly forest area with some agriculture and it belonged to the Poonjar family. John Munro, the British resident and Dewan of Travancore between 1810 to 1814, had visited different parts of the estate including Munnar, leaving descriptions which later helped in its use for the tea plantations.

In 1833, when the agreement for the supply of tea between China and England ended, the British started the search for alternative places in India to grow tea. Tea plants were stolen from China and brought to India. Native tea varieties were also identified in Assam. During 1850s the first Indian tea plantations were tried in the north especially around Darjeling in West Bengal and Sadiya in Assam. The first tea plantation in Munnar is credited to A. H. Scharp in 1880. Tea garden workers were brought from Tamilnadu, mainly poor peasants and tribals. Gradually tea plantations expanded all around Munnar. 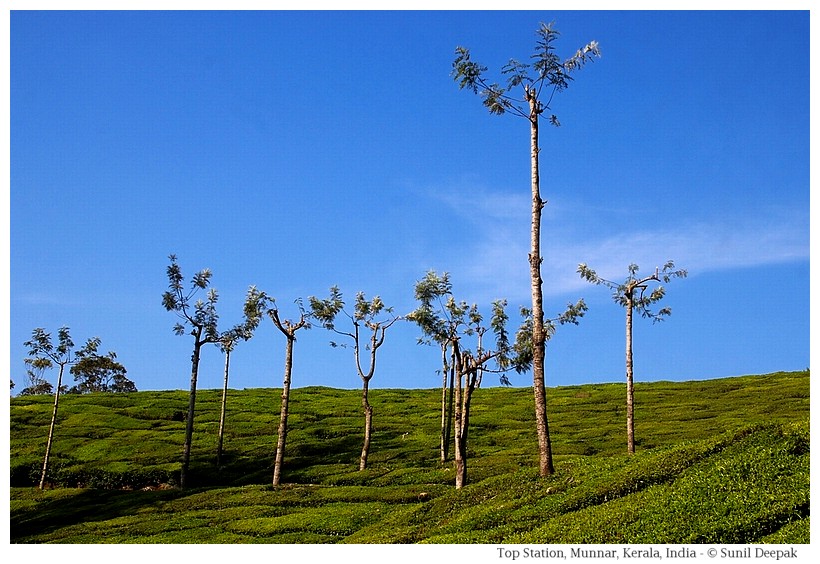 MY VISIT TO MUNNAR

I was at an Ayurvedic hospital in Kothamangalam for a knee pain. After treatment, I was told to give rest to my joints for a few days. Since Munnar was close, I decided to go there. I stayed at SMM Lodge near the old KRTC bus stand, which meant that I was just outside the main town in a calm place with beautiful views. The image below shows a tea garden about 1 km from the hotel. 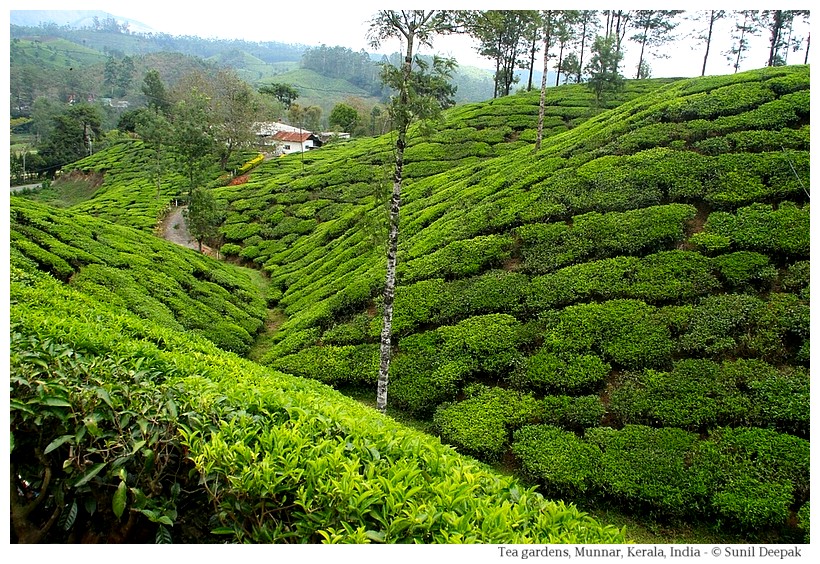 I took some leisurely walks in the city. I also made two tourist trips around Munnar - one to the south-west, going towards Pallivasal and the other to south-east, going towards Devikulam. Here is a brief presentation of the places that I visited during my stay.

The old town of Munnar is located to the south along the Muthirappuzha river and extends from the old KRTC bus station to the bridge near the Christ church. The new Munnar is more developed with more shops and traffic and is to the north. Since I was staying in old Munnar, I only had glimpses of the new town while passing from there in an autorickshaw. It looked like any other town, full of shops, restaurants and noise. Probably it has some temples or other places to see, but I did not explore it.

I visited the Parvathi Amma temple and the Christ church in the old town. Just after the KRTC bus stand there is also the Blossom Park (Hydel park), but I did not visit it.

Parvathy Amma temple is a Hindu temple dedicated to Parvati, the consort of Lord Shiva. It is built in the south-Indian style with statues of different goddesses on the temple dome as shown in the image below. It is supposed to be very old. 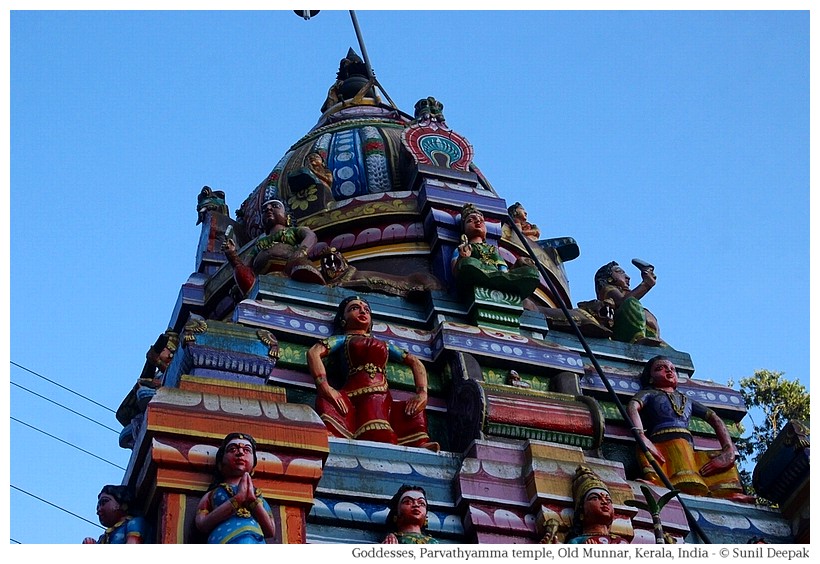 In the courtyard next to the temple is an area for Shiva devotees with nine statues of Shiva. 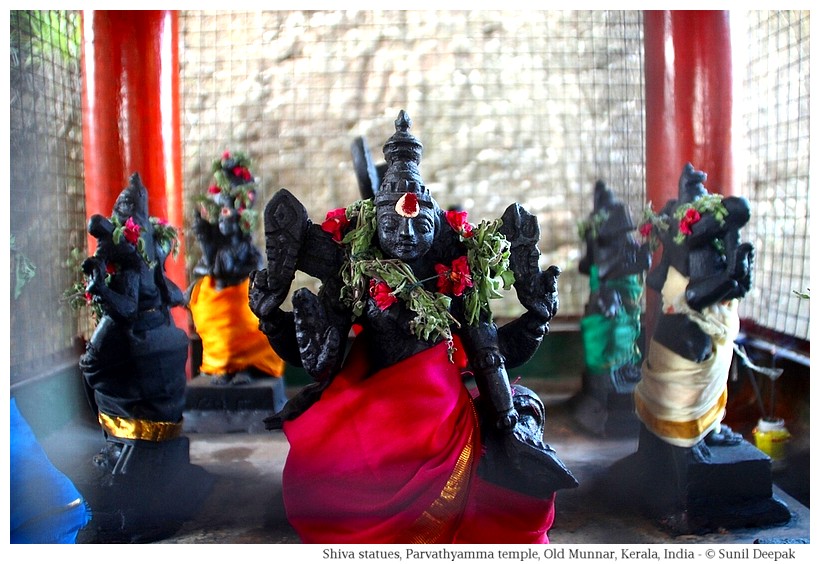 Christ church is the oldest church of Munnar. A stone in the back-wall of the church explains that its foundation was laid by Sir Alexander Kay Muir, Baronet of Deanston (Glasgow, UK) in 1910. It is a simple church on the top of a hill with beautiful views of Munnar city and some nice stained-glass windows. 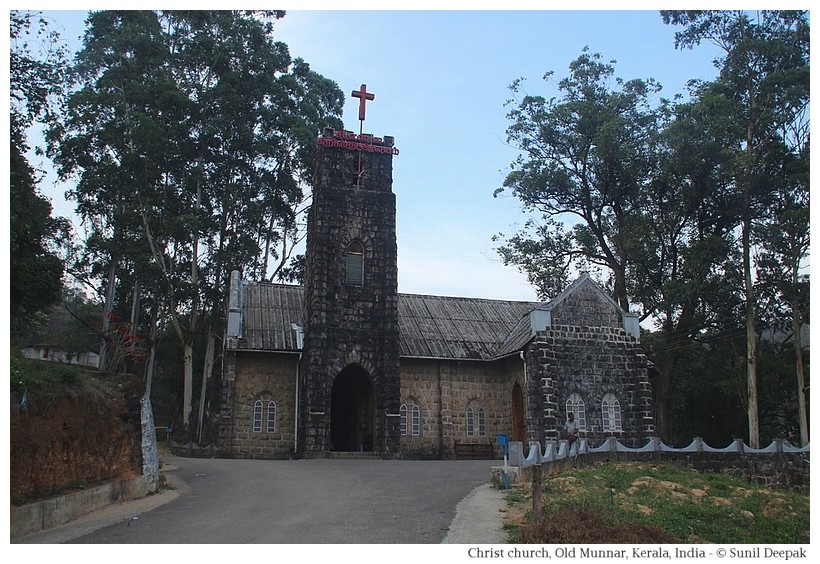 The road coming from Kochi, passing through Pallivasal, reaches south of Munnar. Along this road, a couple of kilometres before Munnar, a bridge across Muthirappuzhar river leads to a hill. 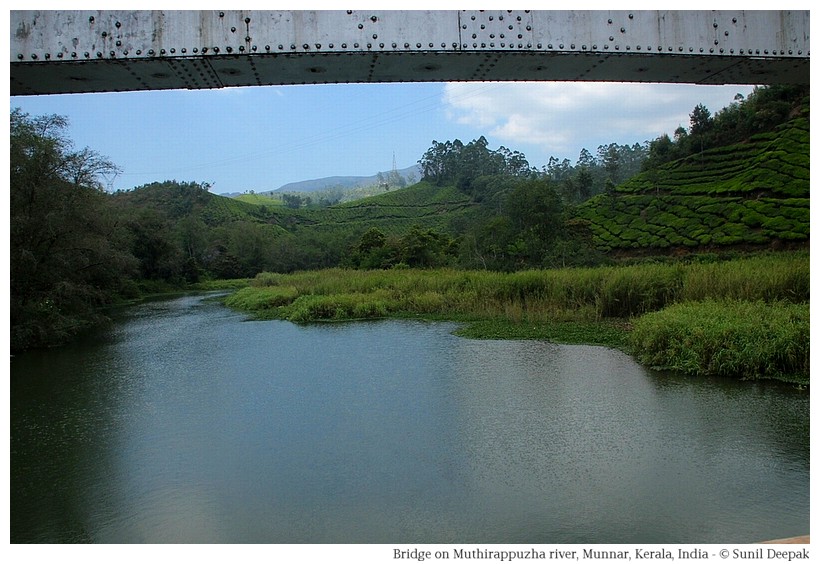 A climb along the hill on the right side after this bridge, overlooking the tea gardens in Pallivasal, brought me to Pothamedu View Point. I did this trip with an auto-rickshaw as I didn't want to strain my knees. 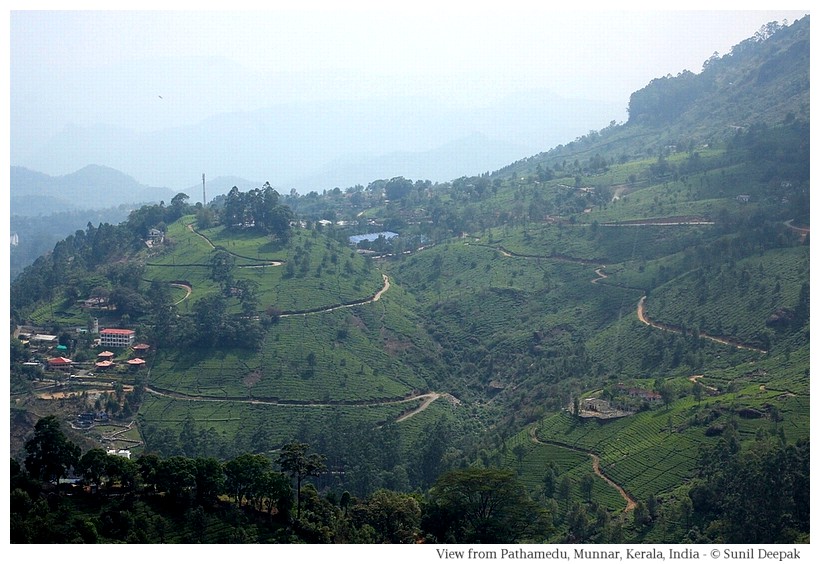 Further down this road, around 5 km from Munnar, a side road in Pallivasal took me to Atukkad water falls. The image below shows an overview of the whole area along with the water falls (towards the right edge of the image). When I visited it, the rains had not yet started and there was little water in the waterfall. Reaching the falls is difficult, so most people stop at a place on the hill from you can see the water fall, without going all the way down to the falls. 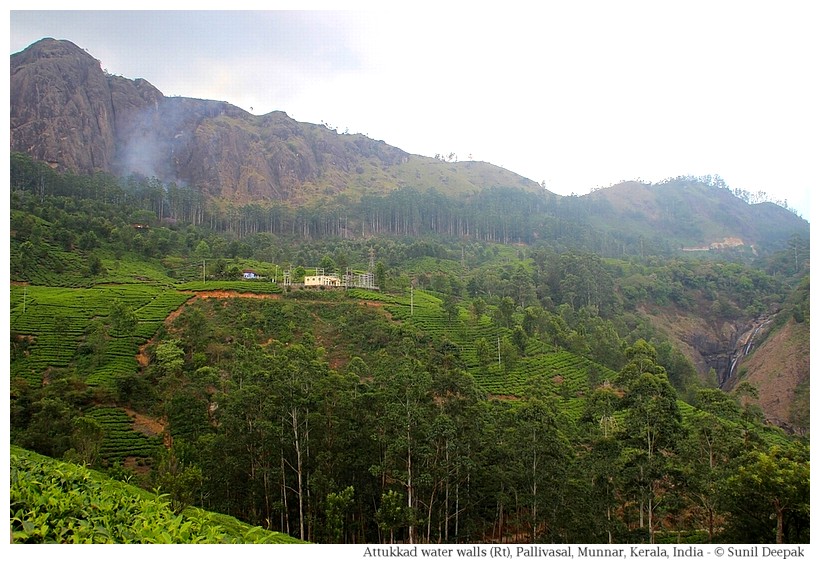 On the whole this visit towards Pallivasal was disappointing. For me, the most beautiful places on this visit were the tea gardens on the way.

A road going towards east from New Munnar will take you towards Devikulam, passing through Mathupetti and Kundala dams on Mathurippuzhar river, and then going up to Top Station at the border between Kerala and Tamil Nadu.

As for the visit to Pallivasal, the views of the tea gardens were breathtaking. The image below shows a view of the waters from the Mathupetty dam. 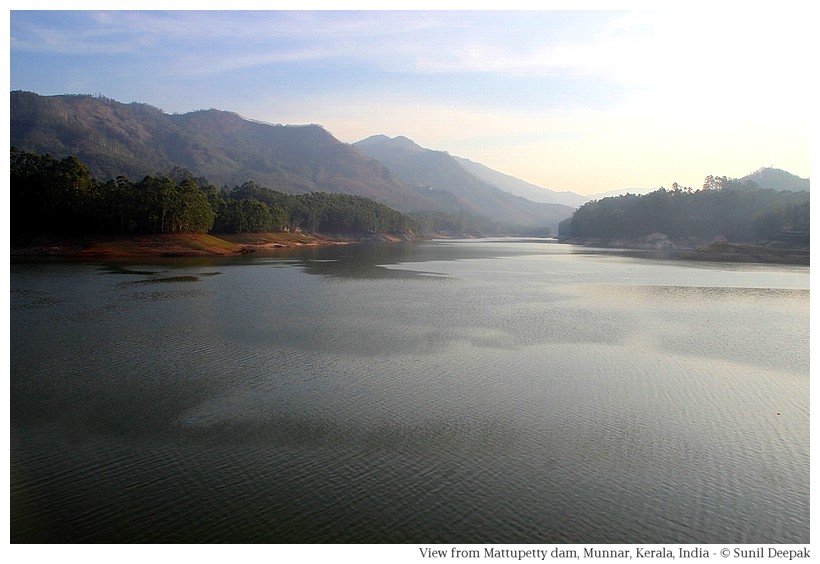 After Mathupetty dam, our next stop was Echo Point where the configuration of the river banks provides a good echo. Here, young persons were busy shouting and taking selfies. 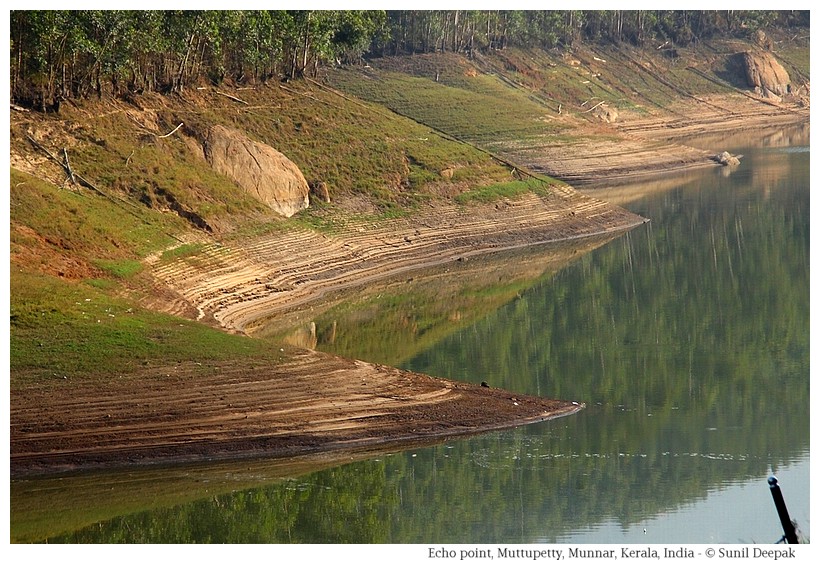 Then we stopped at Kundala dam which has beautiful views of the mountains. Along the dam there are shops and restaurants and people stopped here for picnics. 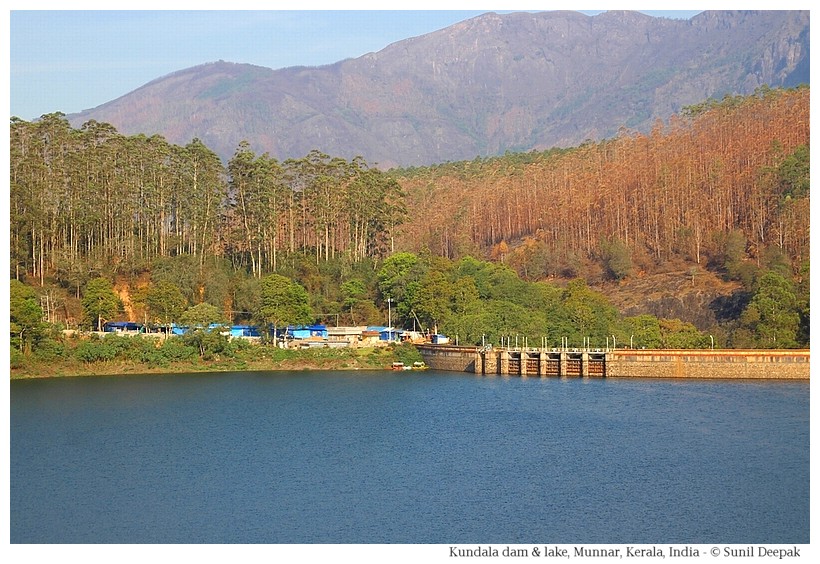 Our last stop was Top Station which has beautiful views of higher mountains around Munnar. It is 32 Km from Munnar, and because of the stops on the way, the journey can take upto one and half hour. It is located slightly less than 1900 metres and from here, the views of Western Ghats and Theni valley in Tamil Nadu are amazing. 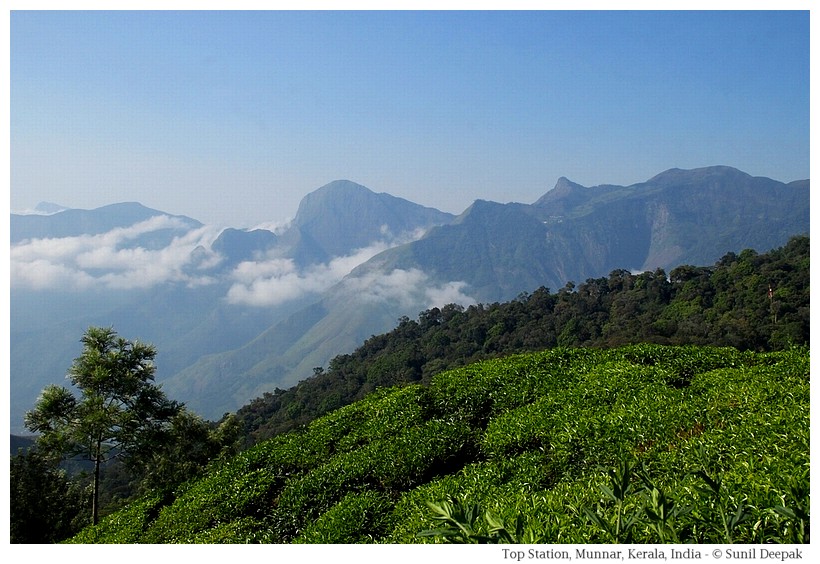 There were some other places to visit on this visit such as the rose garden and the botanical gardens. However, I did not visit them.

Munnar provides a lot of opportunities for observing nature. During my walks in the city, I could observe numerous birds. On the visit to Devikulam, we were lucky to see a couple of female elephants with baby elephants. 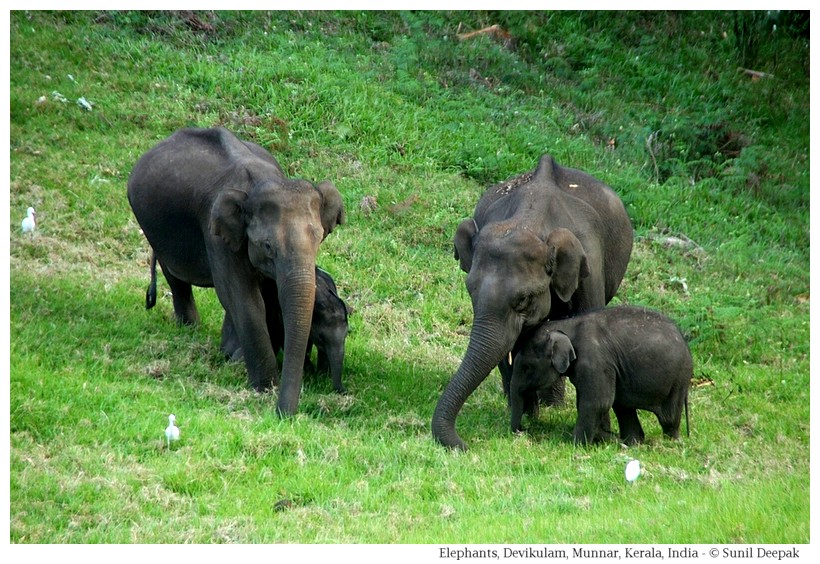 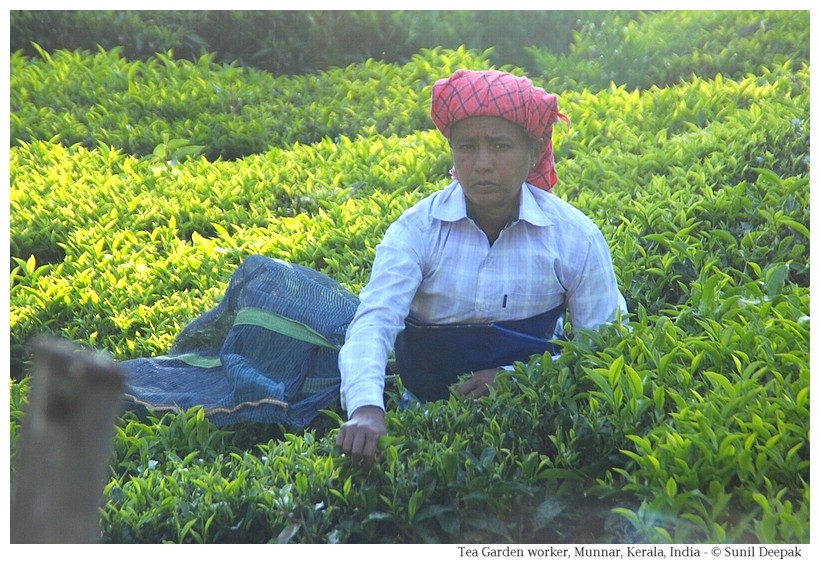 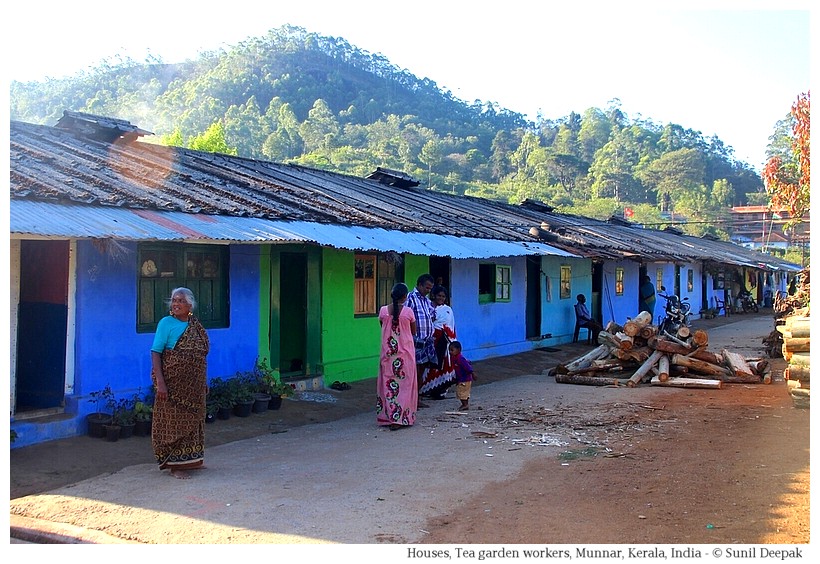 My visit to Munnar was a last minute decision. Since I like quiet and beautiful views, I am glad that I chose to stay in Old Munnar, away from the shops and noise of New Munnar.

Though I did make some tourist visits around Munnar, I usually avoided walking so I visited a limited number of places.

My most beautiful memories of Munnar are those of the tea gardens spread over hills and valleys. The last image of this post shows the morning mists in the hills of Devikulam. 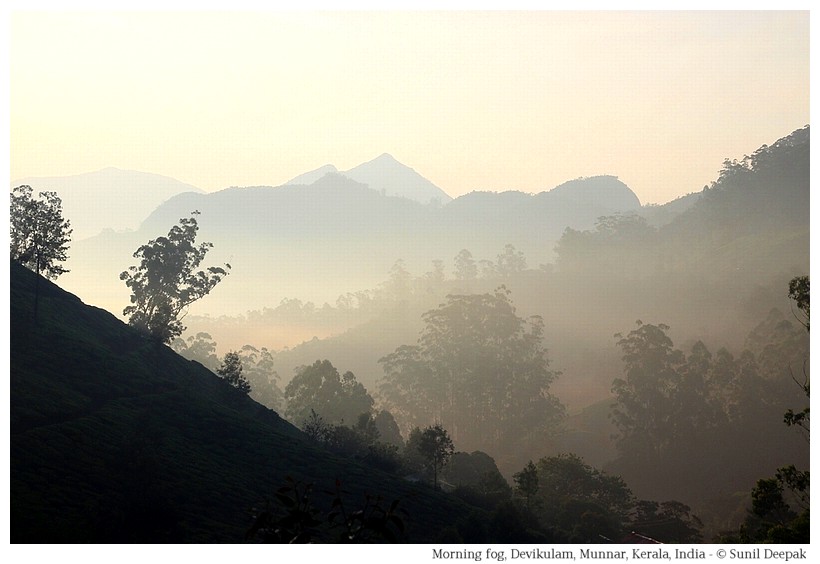