The Science museum of Palazzo Poggi in Bologna (Italy) is famous for their models showing babies growing in the womb used for teaching about child-delivery to doctors, nurses and obstetricians. This post celebrates the recent birth of my grand-daughter. 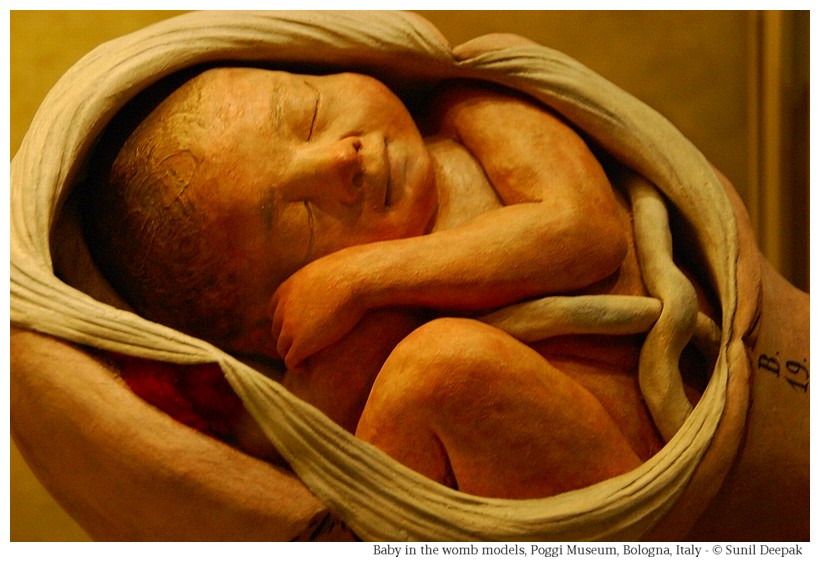 However, this museum is not just about babies in the womb, it also has many other important exhibits related to scientific discoveries in the 16th -19th centuries. This post will introduce you to this beautiful museum.

Origins of the Science Museum in Poggi Palace

Bologna has one of the oldest universities in Europe, it started in 1088 and was part of that era which led to Enlightenment and Renaissance periods. During these, persons started looking at critically and exploring their surroundings, from natural phenomenon to rocks and minerals to plants and animals. Rationalism became the key word and people started questioning the religious dogmas.

Bologna had a number of noblemen (and a few noble women, though their work has not been documented equally well) who did pioneering work in the scientific enquiry. Ulisse Androvandi born in Bologna in 1522 was one such pioneer, whose work on natural history led to a private collection of objects, that became the core of the Science museum of Palazzo Poggi in the 20th century (Image below: the Aldrovandi room. 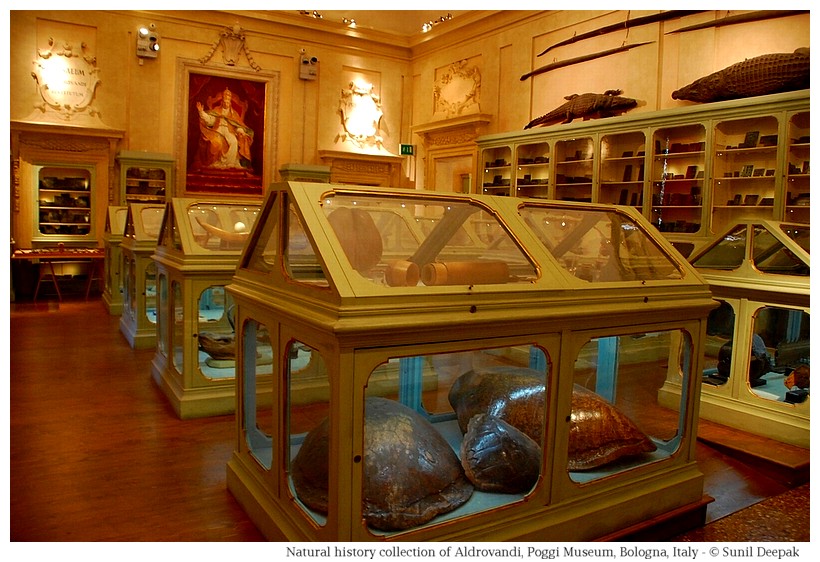 Poggi Palace was built around 1550 as the house of the Poggi family. In 1714 it became the Science Institute of Bologna and a tower of an astronomical observatory called Speculam was added. At the end of 18th century, the arrival of Napoleon in Bologna resulted in dispersal of the different collections of Poggi Palace. In early 20th century many of these were brought back to lay the foundation of the present museum.

Story of the Odysseus

The hall near the entrance, now used for meetings and events, shows beautiful paintings of the artist Pellegrino Tibaldi depicting the episodes from the life of Odysseus (Ulysses in Latin), the Greek king of Ithaca and the hero of Homer's epic poem The Odyssey. 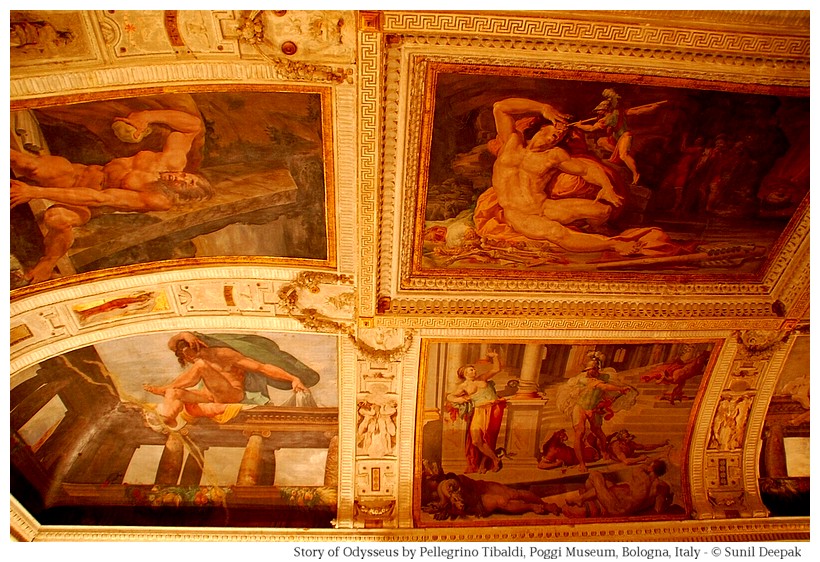 Thus, the Science Museum is also an important place to admire art. It includes the works of Niccolo dell'Abate, Prospero Fontana and others. Another work of Tibaldi, the story of Susanna, is on the first floor of the building, which hosts the main museum.

Babies in the womb exhibits

This is my favourite part of the museum. The use of three dimensional models to teach the complexities of child birth to future obstetricians was started in Bologna by Prof. Giovanni Antonio Galli in the 18th century (image below). His teaching was so good that a school of obstetrics was created here in 1758. 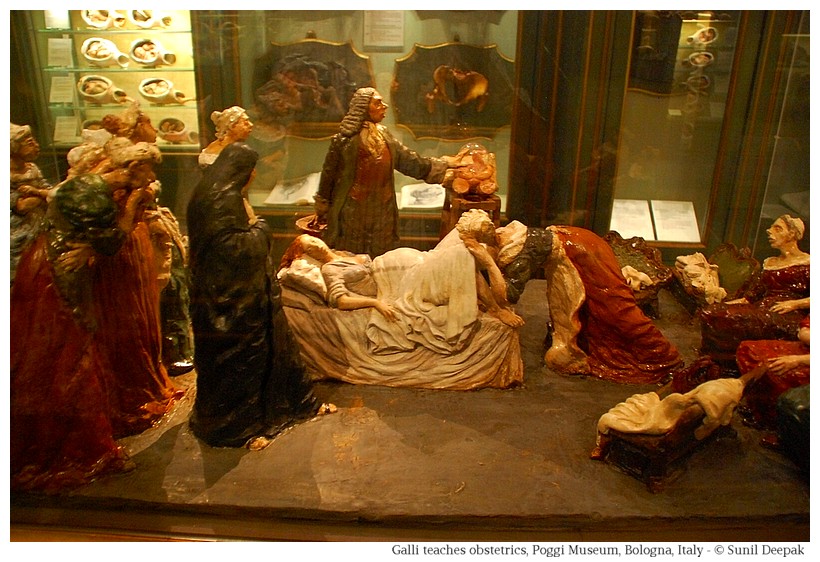 He combined the teaching of theory and practice through these models. 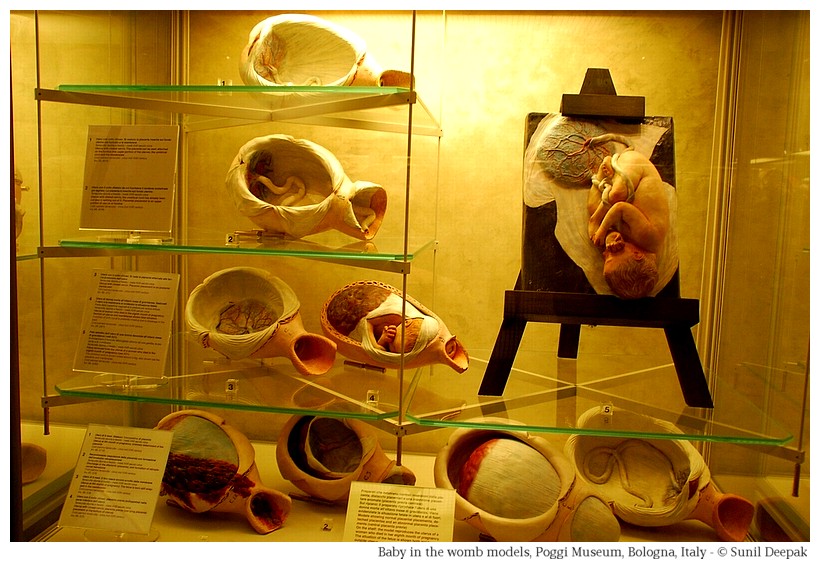 The models show the different ways in which the umbilical cord can lie around the baby in the womb and in rare cases cause complications. Thus obstetricians could understand the mechanisms of cord-prolapse and other complications and think of solutions to safeguard the lives of the mothers and babies. 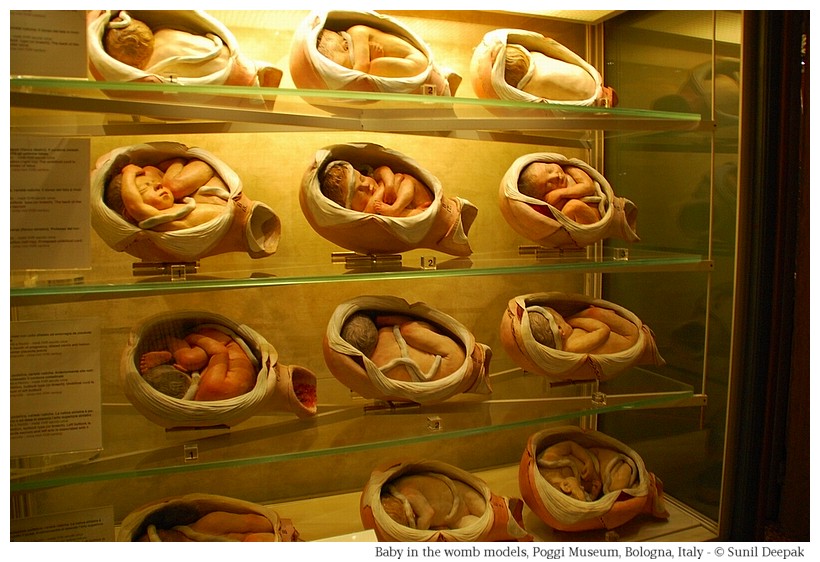 The models also show the different positions of placenta inside the womb. The placenta is the bridge between the mother and the baby. Sometimes, the position of placenta near the womb opening at the bottom can create dangerous complications for the life of mother and baby. Therefore it was important for the obstetricians to understand those positions properly. In the 18th century this kind of understanding contributed to better delivery practices. Today such complications can be seen easily through ultrasound. 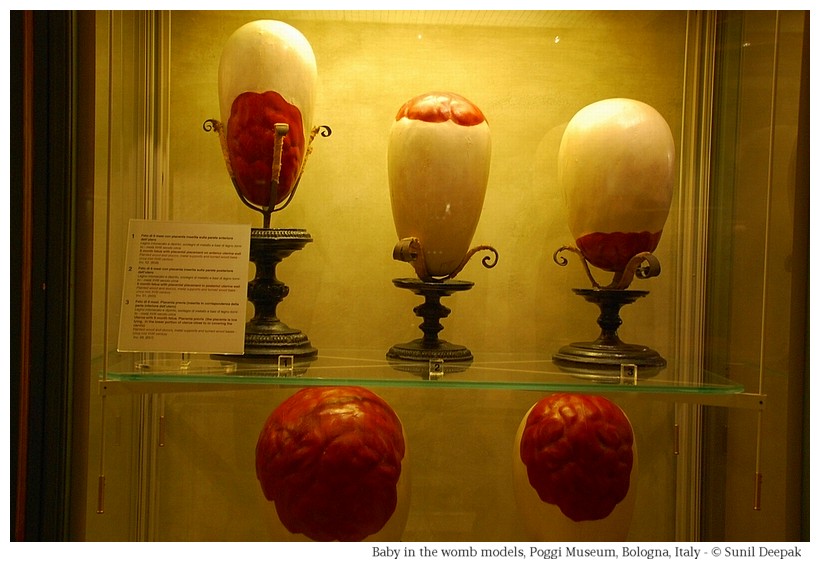 The models also show the different ways in which identical and non-identical twins can occupy space inside the womb and how this may affect their delivery. 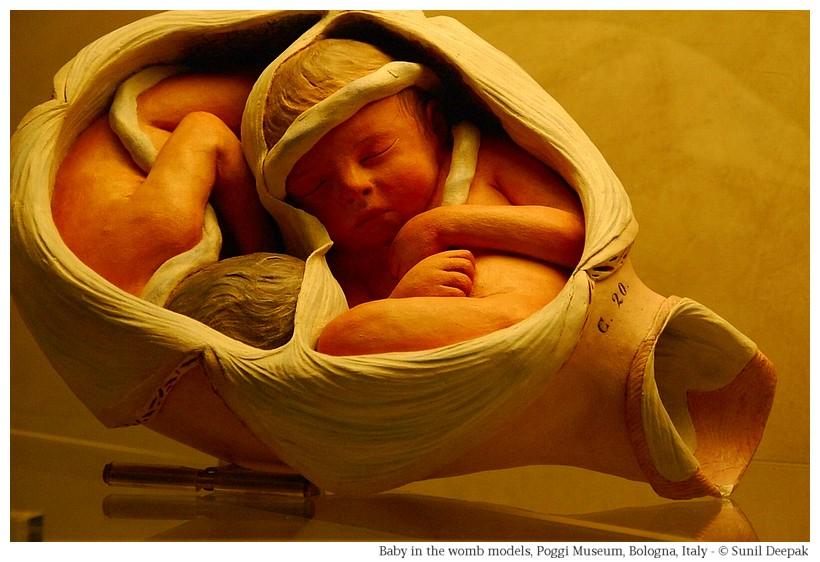 Doctors like Prof Galli employed their own sculptors and artists to make the human body models to teach to the students. Ercole Lelli was appointed as the head of this department of scientific artists. In 1742, Lelli proposed the creation of human sized statues of men and women to explain the different layers of muscles and bones. Thus the anatomy room was created in Poggi Palace in 1747. 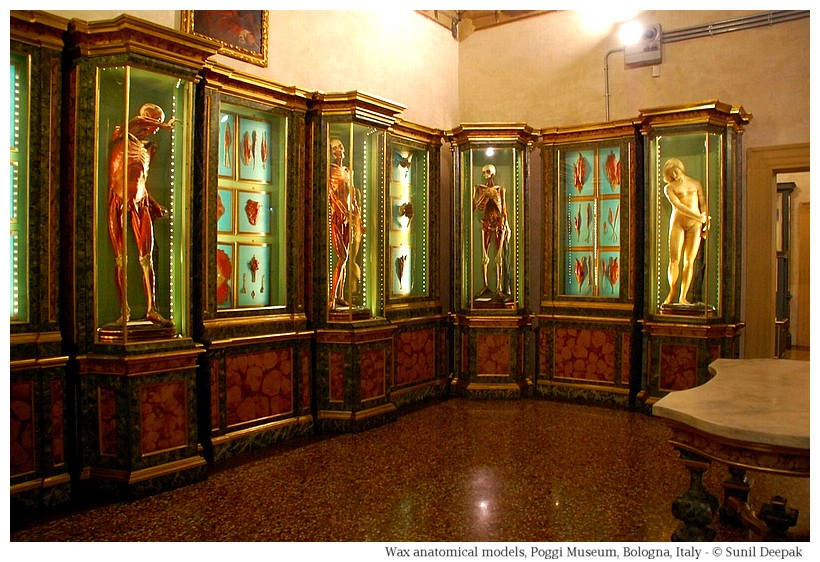 Inspired by their example, medical schools all over Europe created similar departments and human anatomy models.

The museum also hosts a copy of a famous female body model called "Medici's Venus" (the name referred to the Medici family of Florence as well as to doctors) created in Florence by the artist Clemente Susini around 1780. In this model, the students could open the different parts of the female body and understand how different organs were placed inside and their inter-relationships, including the pregnant uterus. The model was useful for surgery students to see the blood supply and nerves around the different organs and plan their surgery. 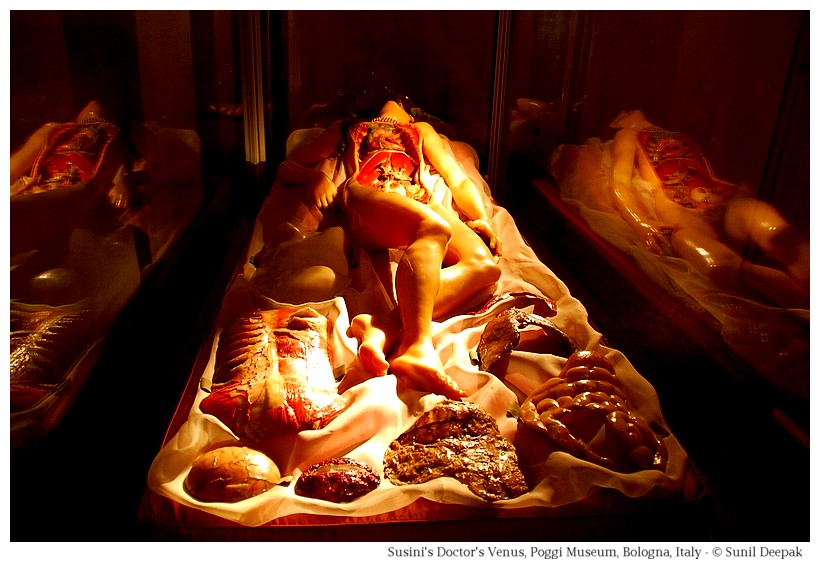 People visiting the museum are fascinated by these models and often forget to look around. For example, the room with the "Medici's Venus" has beautiful frescoes of cherubic boys busy in vineyard designed by Niccolò dell'Abate in 1552 before he left for the court of king Henry II in France. 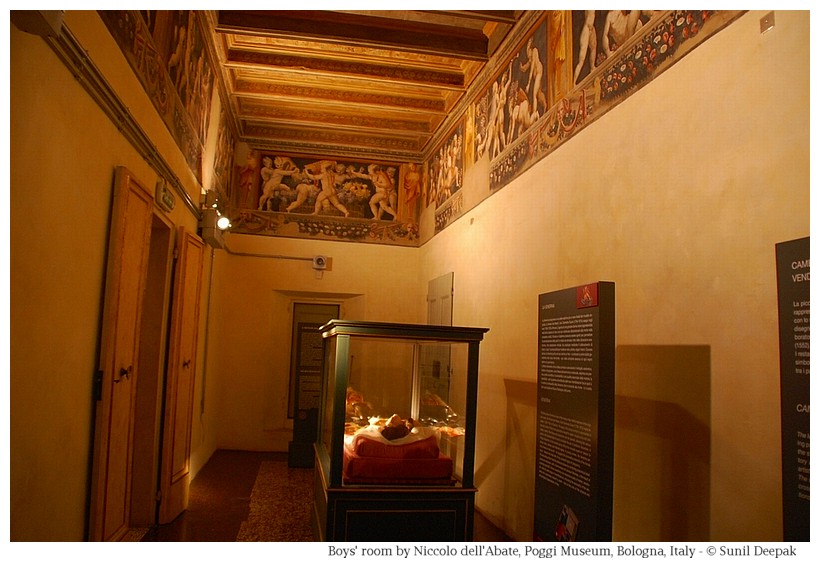 Other important scientists in the museum

The museum is full of exhibits from Bologna, each of which has its own importance in the history of science in the world. It has equipment that was used to make important scientific discoveries. I just want to share two examples with you.

The first example is of Marcelo Malpighi, called the father of microscopic anatomy, histology, physiology and embryology. He pioneered the use of microscope to understand the human and animal bodies. For example, he was the first person to see the capillaries and explain how arteries and veins connected and their role in blood circulation. His name is remembered in "Malpighian" bodies. 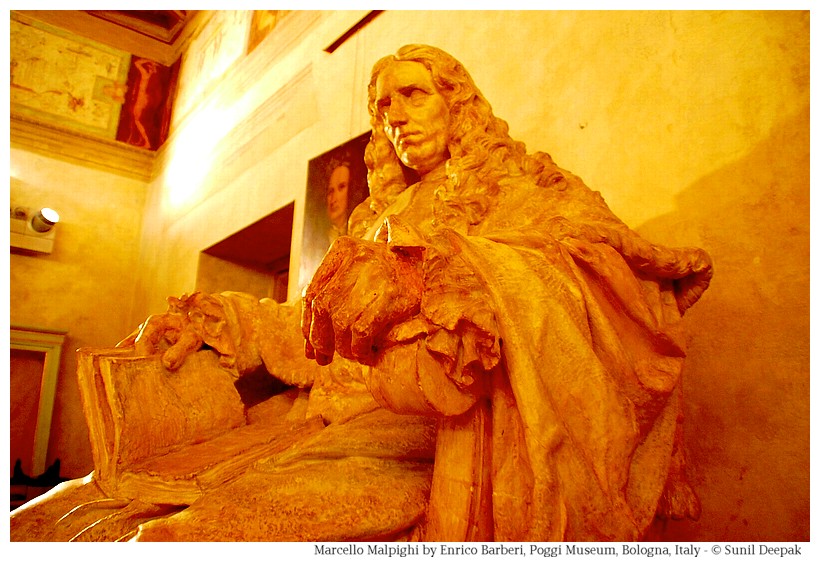 The other example is of Luigi Galvani who discovered different things about the electricity. It was his idea that human electricity transmission makes the contraction of muscles needed for body movements. He showed it by demonstrating the effect of electricity on a frog-leg. 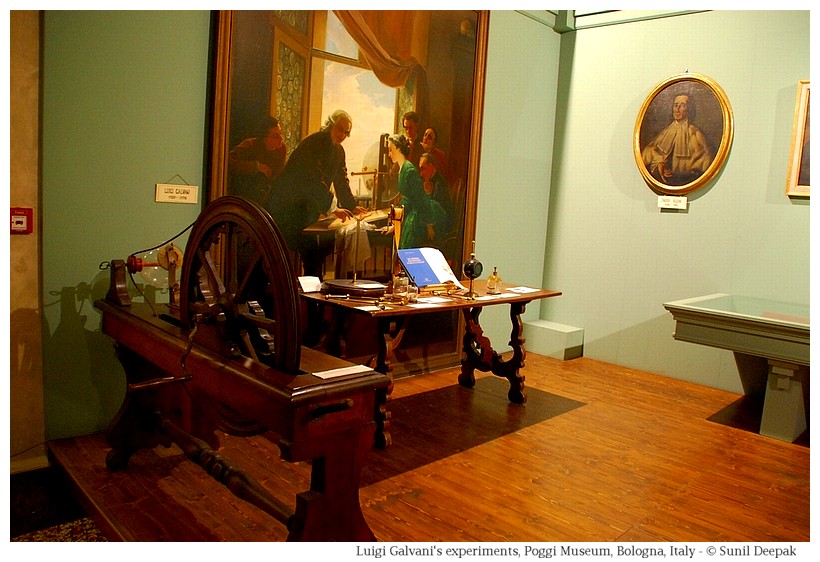 In the museum you will come across many names which are familiar to medical and science students during their studies. Personally I find it exciting to see the equipment those persons had invented in their search for understanding the world.

The science museum of Palazzo Poggi in Bologna is a treasure trove if you are interested in the history of medicine and use of art for teaching science. In this post, I have limited myself to certain parts of this museum. However, the museum has many more things to show, such as the development of war strategies and the ship-building. 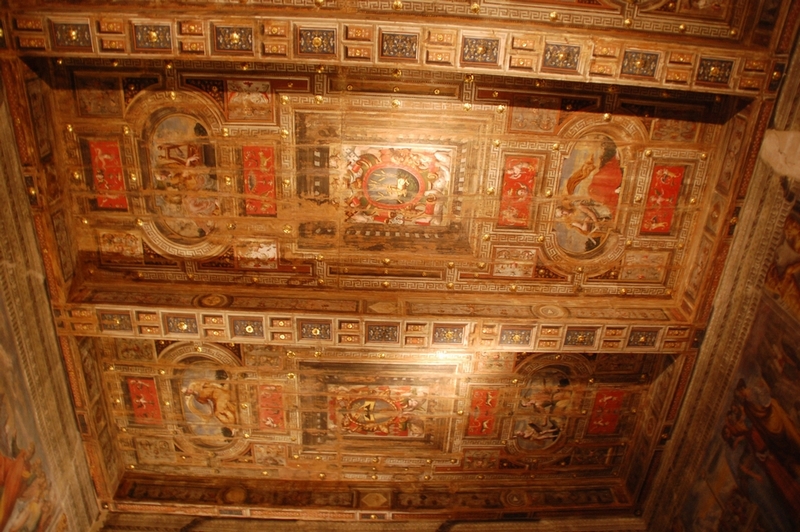 I have been to the science museum a couple of times and every time, I find new things in it. If you are visiting Bologna and you are interested in the history of science, do not miss this amazing place.