Some months ago I visited the house of an Italian artist and sculptor called Corrado Meneguzzo. It was an opportunity to look at some of his works and to talk to him about his art. 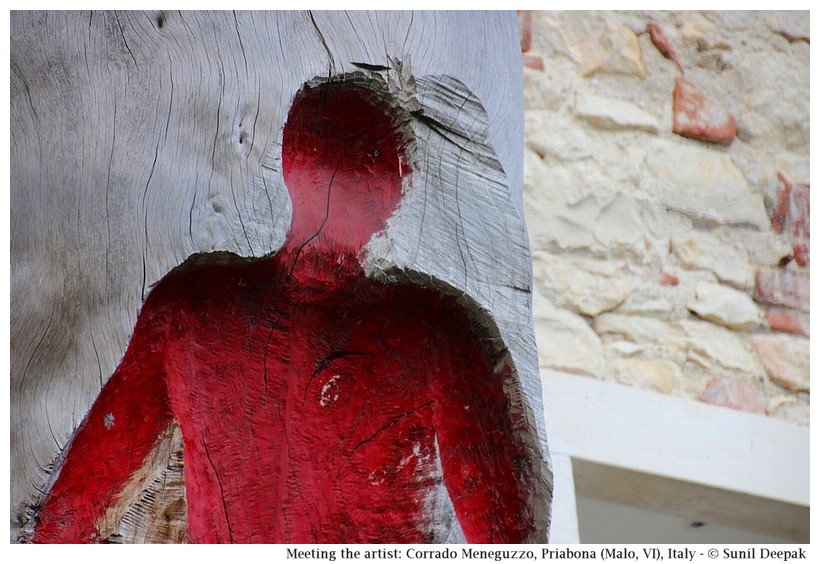 The above image shows one of Corrado's art installations. The art does not arise in a vacuum, it is molded and guided by the life-experiences and living-contexts of the artists. I love visiting artists in their homes and to listen to them talk about their works.

Corrado lives and works at the top of a hill in a relatively isolated area of a small alpine commune called Priabona, a few km from Schio in the north-east of Italy, where I live. The visit to Corrado was organised by a friend, Roberto, for a local cultural group. We were a group of about 15 persons. (In the image below, Corrado, wearing blue jeans and blue shirt, is in the centre) 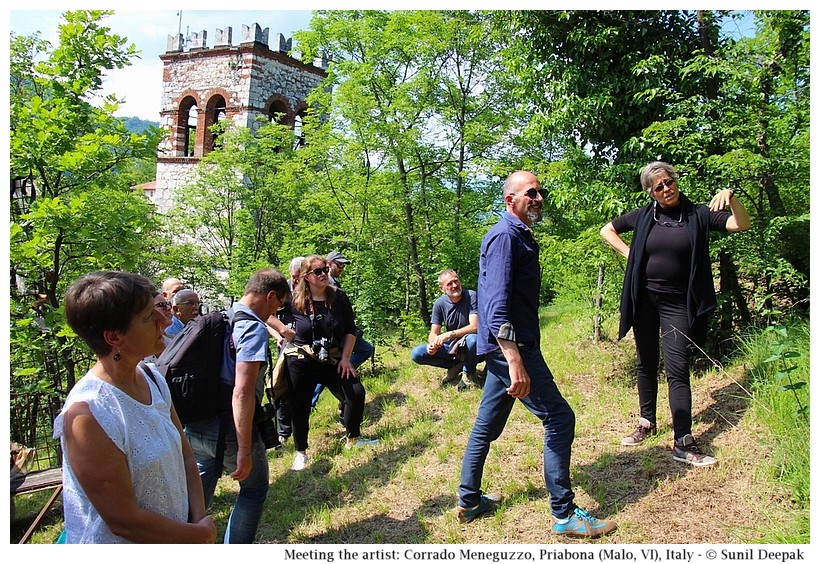 When we reached his home, Corrado was waiting for us with an illustrator friend, Luca.  From his isolated and drenched-in-silence home-studio on the top of a verdant hill, we could see the houses and the church in the tiny commune of Priabona far below us. Except for an old abandoned church with a bell tower, there were no other buildings or people living nearby. 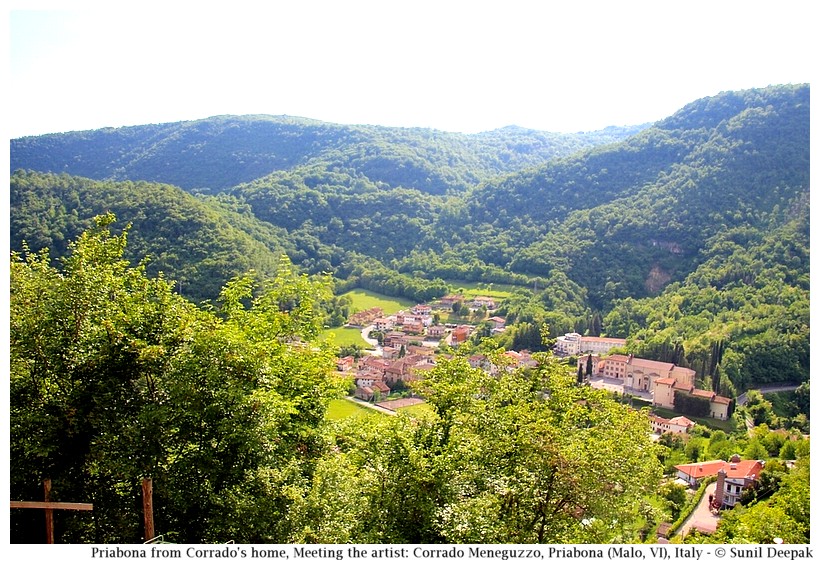 Corrado explained that archaeological objects from the neolithic and from the Lombard invasion periods (6-7th century CE) have been found in the area around his house. He said that this idea of living in area which is on a continuum of ancient human settlements for thousands of years, is very important to his sense of being an artist.

He explained, "I grew in a house in the valley below with my grandfather who used to make wooden objects. My step-father used to decorate churches. My uncle Giobatta brought artists to our town and I had been visiting his museum ever since I was young. All this sparked my interest in art. When I was seventeen, I took part in a collective exhibition in the Casabianca museum. I did a diploma in architecture focusing on old painting techniques. But studying art was more of a personal endeavor."

One of his first works as a sculptor-artist was to find and renovate an old house on the top of the hill, that was a crumbling ruin, and make his studio-home in it. He says that he did almost all the renovation by himself, one step at a time (Corrado's home in the image below). 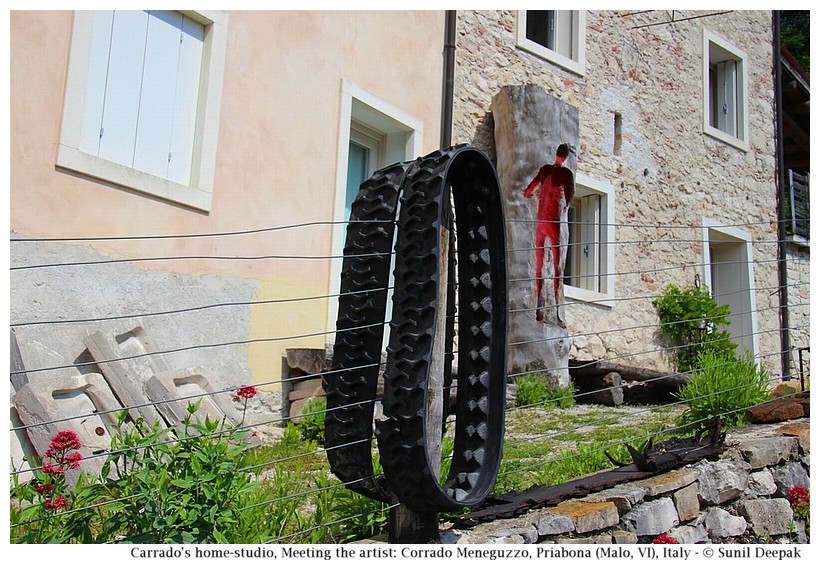 Just outside his house there are displayed different old art installations including a few wooden sculptures and some chairs made of different materials including old truck tyres, mostly from 2005-06. 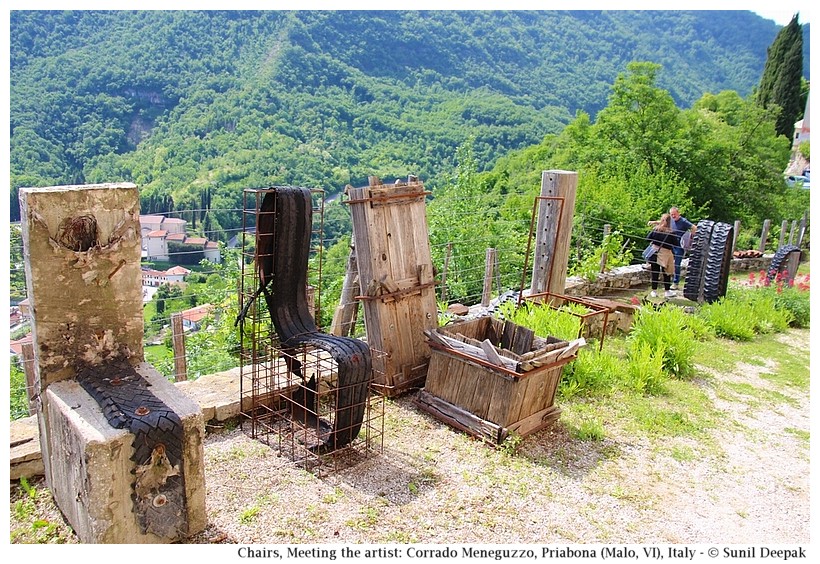 Corrado explained that in the 1990s he used to work more with stones. Then he shifted to cement. Around 2006-07 he did a lot of work with old tyres. Now he likes to work with wood. In between he also does paintings. He feels that each material has its own voice and it tells him what it wishes to communicate.

He took us to a short visit to some of his installations spread out in the open areas and grassy slopes around his house.

Corrado's home is located behind an old abandoned church with a bell-tower on a hillock rising behind it. From the hillock, you can look down on the other side of the hill in the valley below towards Malo and the road going towards Vicenza 25 km away. 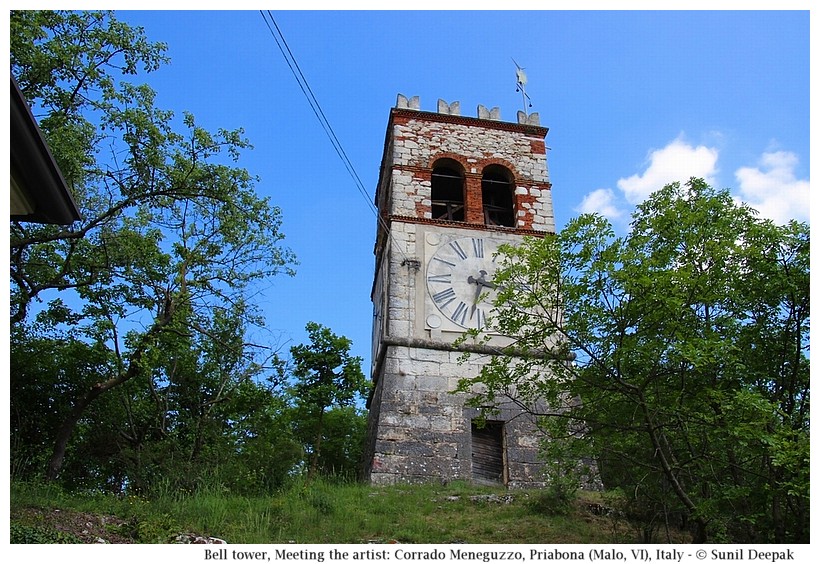 He started the visit to his works by taking us up the hillock, behind the bell-tower. This brought us to an art installation called "the Confessional". Built in wood and painted in black, the confessional looks more like a pulpit. Personally, its design made me think of a guillotine where they could behead persons. 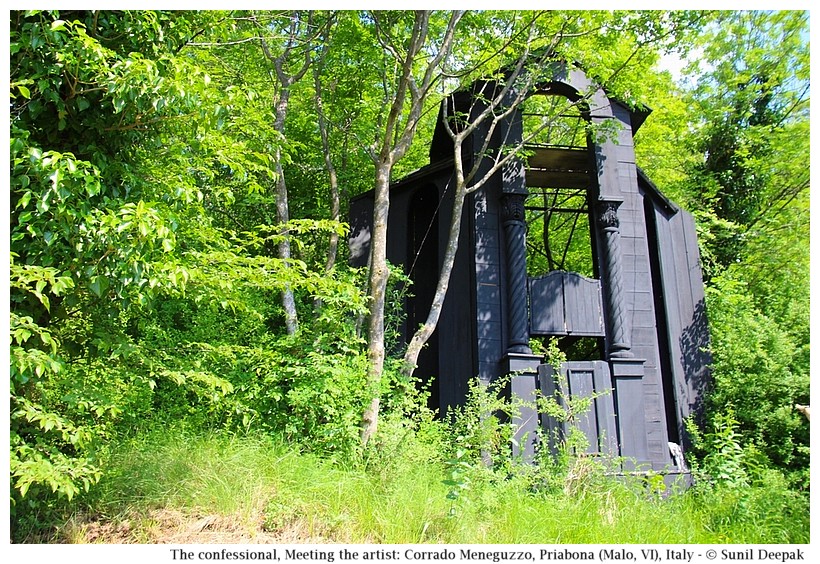 Corrado explained that as a child, his mother took him regularly to the Catholic church. He was a three years old child and was supposed to confess his sins to the priest. Since he was tiny, sitting at the confessional he could only see the legs of the priest sitting inside.

He didn't seem to have pleasant memories of those visits and through this installation made in 2011, evoked the feelings of dread and sadness that the confessionals represented for him. His religion related experiences seemed to play an important influence on his art.

It is an installation made from an old feeding trough that was used in the past for giving hay to the cows. Corrado had turned it in a standing position and then fixed a small red cup to the top, which holds water for the birds. It was an installation on the transformation of objects, that he had made some 10-11 years ago. 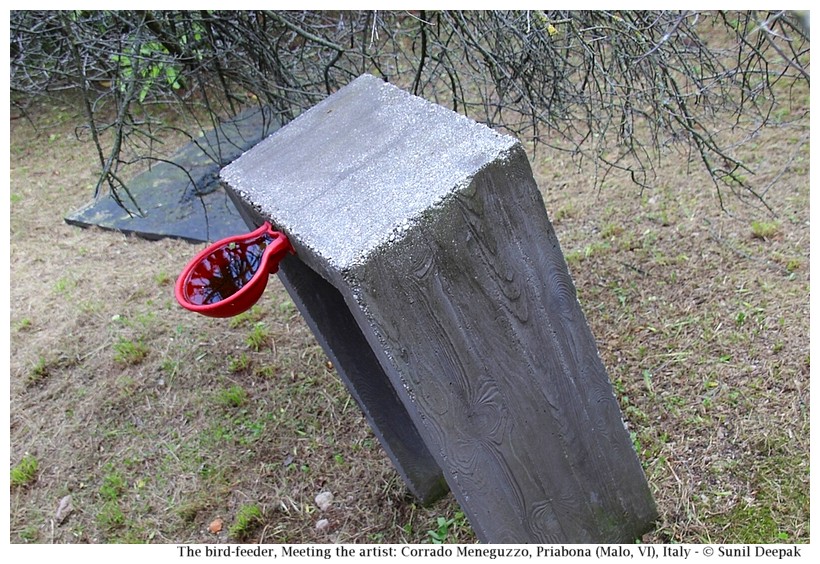 The concrete moulds of the old suitcases were made for a project called "Interpreting America" in 2011. These represented the emigrants who used to leave Europe with with their belongings closed in old suitcases, leaving their homes to search for a new and better life somewhere else. Today, the emigrants from Africa and from the different wars, are a new version of the age-old search for security and well-being. 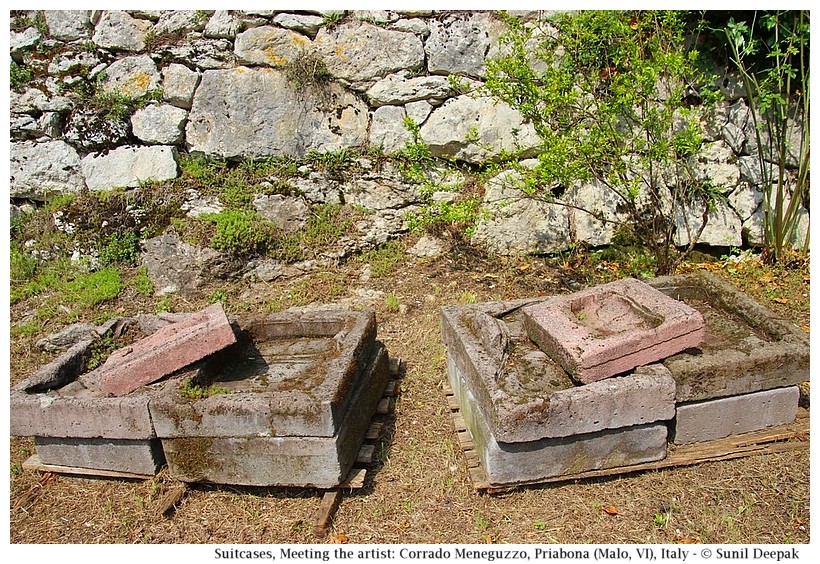 The cement moulds of the suitcases were brought back to Corrado's home after the end of the exhibition, and were left out in the garden. With time, moss and grass has grown in those molds, giving an idea of decay and at the same time, bringing them to life.

For me, this installation of a vaginal opening made in dark concrete and fitted with a red grill was the most provocative sculpture of Corrado. When I saw it, I thought that it symbolised the violence against the women and the horrible practice of female genital mutilation, still common in some communities/countries especially in Africa and Middle east. It is also prevalent among the Bohra community in India. 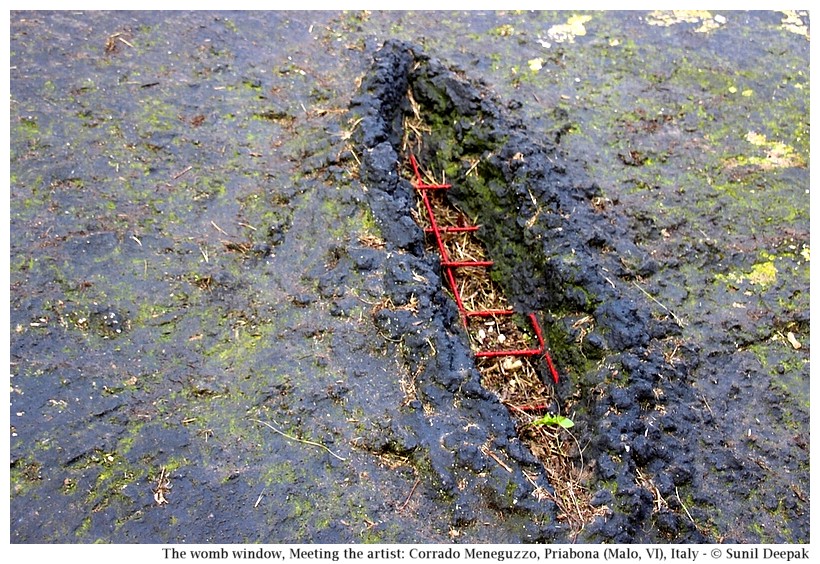 However, Corrado gave a completely different interpretation of this work. He said that it represented his mother. The red grill was supposed to be his window, behind which he used to stand as a child and look out at the world from the safety and the security of his mother's protection.

Over the past couple of years, Corrado has been sculpting chairs, especially the "angel chairs" or the chairs with wings. He has been experimenting with different kinds of materials and techniques for making these chairs.

One of the chairs that he was working on, was placed in the veranda of his studio. It was huge and made with rough wood. It was shaped like a broken angel, a kind of Milo's Venus transformed into a chair. I really loved this sculpture. 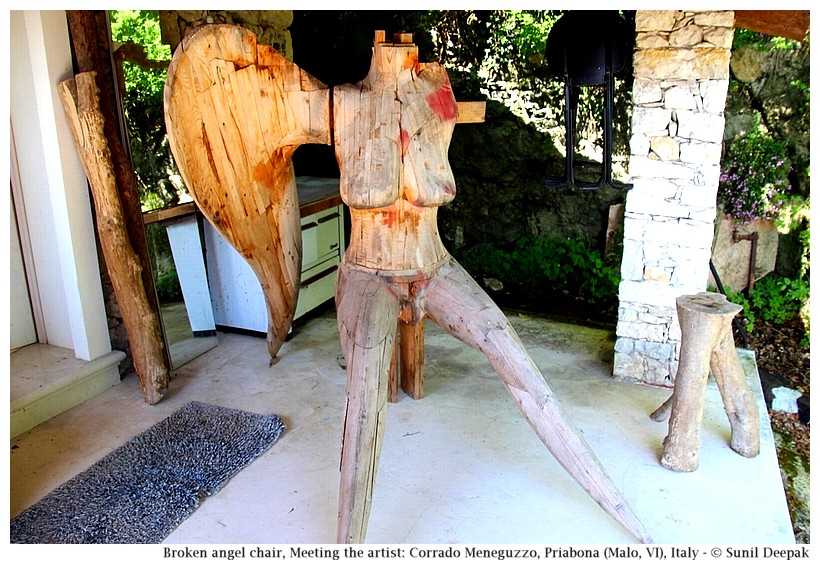 Inside the studio, there were different chairs in wood, lacquered with a shining red paint, that he was completing for an exhibition to be held in Los Angles. He explained that making of each of these chairs took around 400 hours of work. These are part of his "Seat Art" project. 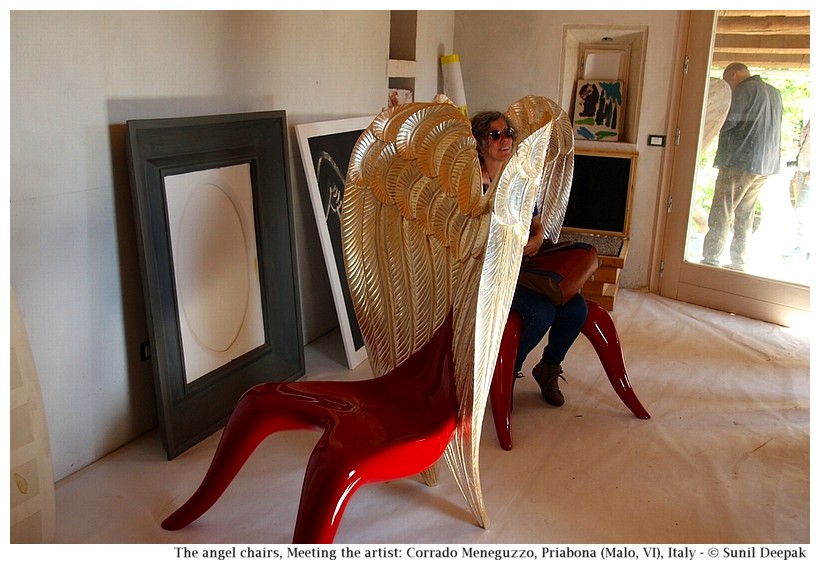 There was many other chair-sculptures in his studio including a more traditional looking wooden chair painted in red and with the sign of cross on its back, with a rosary wrapped on its back; and another made with wood and an old tyre. 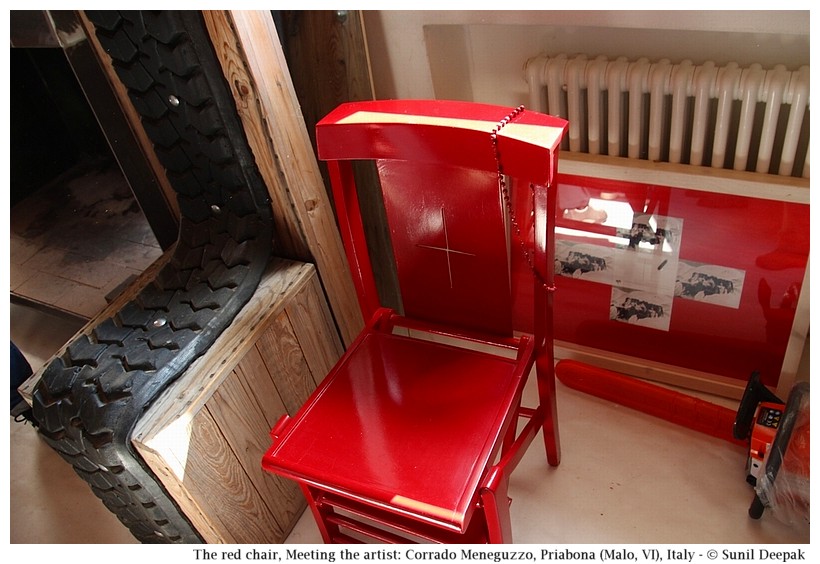 The studio also had different paintings by Corrado. One of his old paintings had a woman dressed in black standing near a lake. 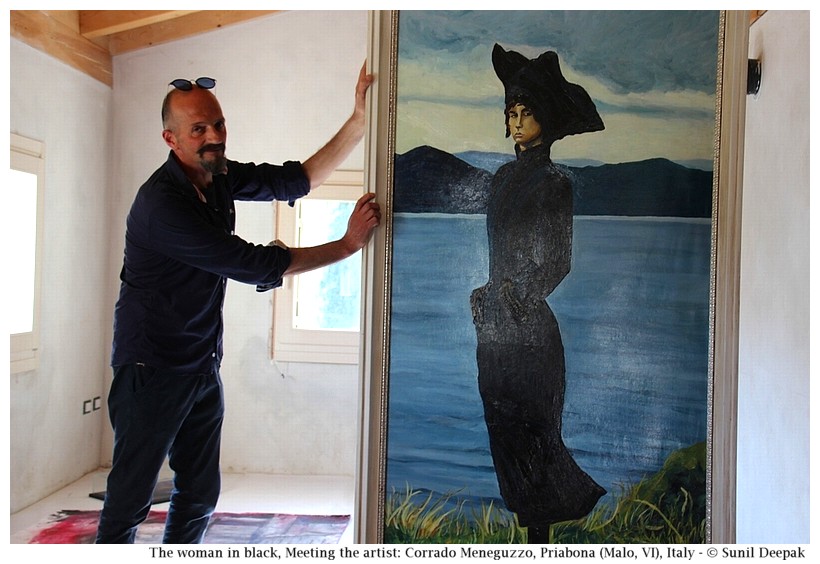 A lot of his paintings were about female genitals dripping blood. This brought back to my mind our discussion in his garden about the sculpture of the vagina with the red grill. Though he had explained that sculpture in more happy terms, I think that his art represents some unresolved issues with women and sexuality. 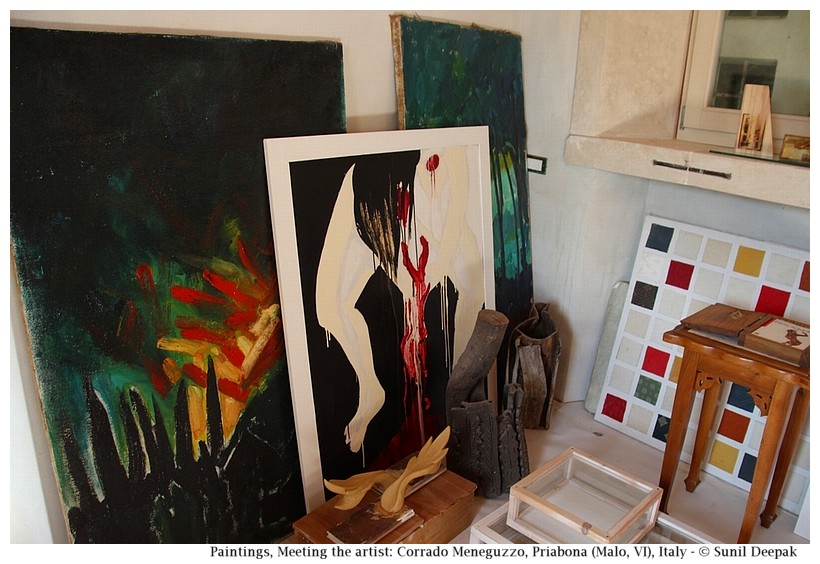 Another of his paintings was a nude self-portrait (click on the image below for a larger view). 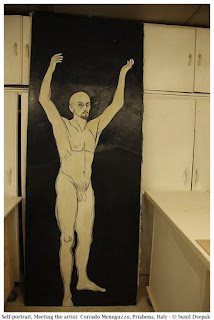 If I had seen any one of his art works displayed in an art gallery or in a museum, it would have given me a certain idea about Corrado as an artist and as a person. Looking at his home and at the different works he has done over the past 20 years and listening to him talk about them, gave me a different kind of understanding about his art.

Of all his artistic works, the one which I would like to own, if I had sufficient space to display it properly, would be the "Broken angel" chair. I think that this choice represents my own preference for romantic and good-looking art. In terms of emotional impact, I think that my vote will go to the "Womb Window" or the "Suitcases", though I wouldn't like to own them, as I found them disturbing.

I had asked Corrado, which of his art works was the one that he felt closest to his heart. He had answered that probably it was the Confessional or perhaps the painting of the woman in black.

If you could choose only one of his art works, which one would you choose and why?