Searching for the red India

Many decades ago, I was visiting a friend's home in Italy. Her young son asked me, "You are not red, why do they call you red Indians?" He had been told that I was from India and the only Indians he had heard about were the red Indians from America.

This post is not about those red Indians. It is about pictures from India where red colour plays a special or dominating role.

I love photography and have thousands of images in my picture archives. Writing this kind of blog-post is an opportunity for me to dig into those archives and in the process, relive my past journeys and the people I had met - a very pleasurable past time!

Among the Indic religions, red is the colour of sacred and of happy occasions like marriages. Let me start this post with a very striking image from a religious ceremony. 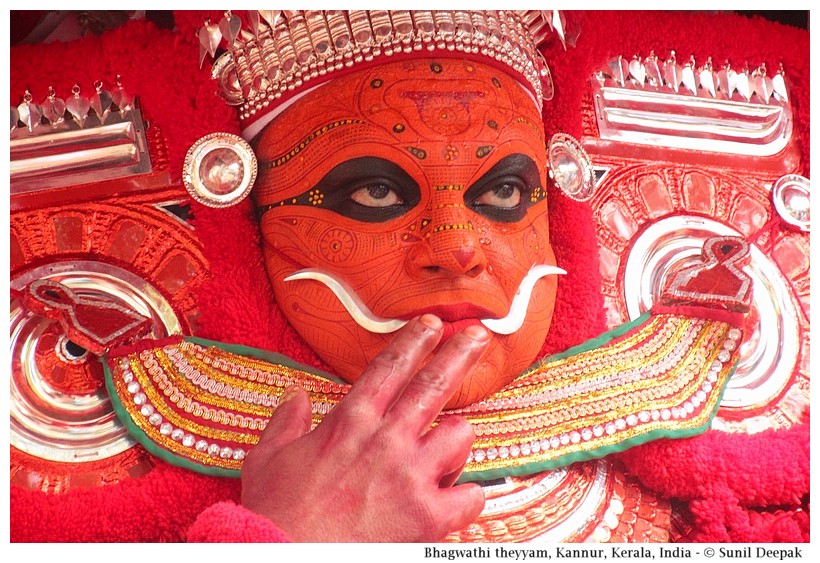 1. Theyyam, Kannur, Kerala: The first image of this post (above) is from Kannur in Kerala at the southern tip of India and it is from a Bhagwati theyyam ceremony. "Theyyam" is a Hindu traditional religious rite in which the God comes down to the earth and manifests in the body of a human being. Persons playing Theyyam or the living gods, often belong to the so called "low castes" and while they are the living god, everyone from the community bows to them. Theyyam takes place in the temple and the surrounding courtyards. Most theyyams are dressed in red.

Theyyam is unique for the elaborate makeup and rituals linked with this tradition.

2. Dollu Kanitha, Bangalore, Karnataka: The Dollu Kanitha folk dance from Karntaka. It has persons carrying the god statues on their heads as they come out of their temples and go out in a procession in the community. In this occasion, some of the persons dress up as different gods. The next image has a Dollu Kanitha dancer dressed as one of the gods. 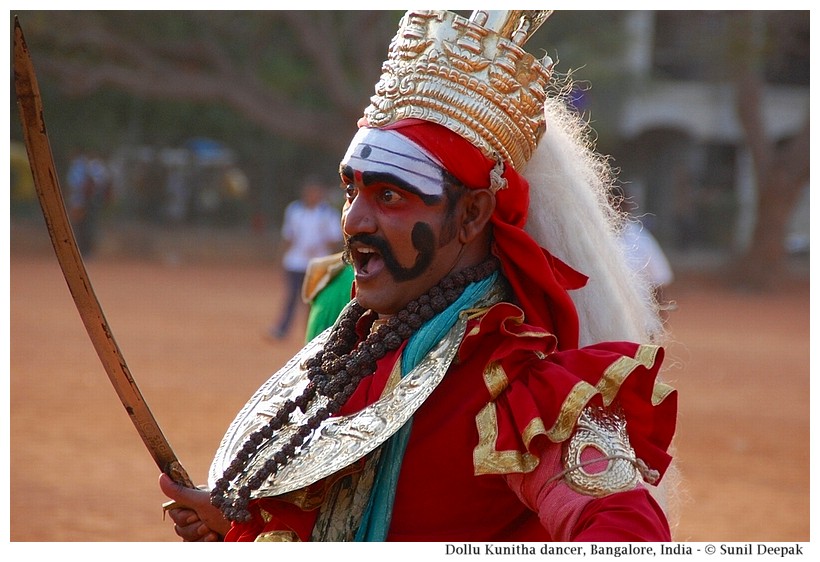 Thus, the idea of God coming down to speak to humans through the medium of a person is not unique to Kannur, rather it is seen in different forms in different parts of India.

3. Person dressed as Goddess Kali, Guwahati, Assam: West Bengal and Assam in the north-east of India have a strong tradition of mother-goddess (Shakti) worship through Saraswati puja, Durga puja and Kali puja. There is also a tradition of persons dressing up as mother Kali, the angry manifestation of the goddess. The next image has a boy dressed as Goddess Kali at the Kamakhaya temple during the Ambubashi festival.

Almost always, the persons taking up the role of gods are men, while women get to play such roles only rarely. 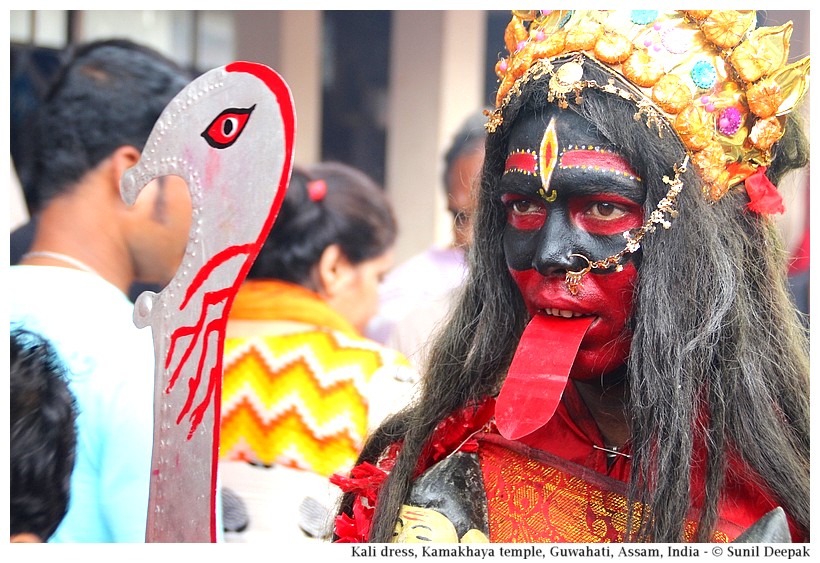 The Dashhera celebrations in Kullu valley surrounded by mountains are different from the rest of India. During this festival, the patron gods and goddesses of mountain villages are brought out of the temples in processions and they travel down to the Kullu valley for their Dushhera holidays. Mountain communities come to live in Kullu with their gods and the whole period is full of religious ceremonies.

The image below shows the chief priest officiating at the Dashhera celebrations in Kullu, praying in front of the deity for the initiation of the festival. As in the above images, the red colour predominates. 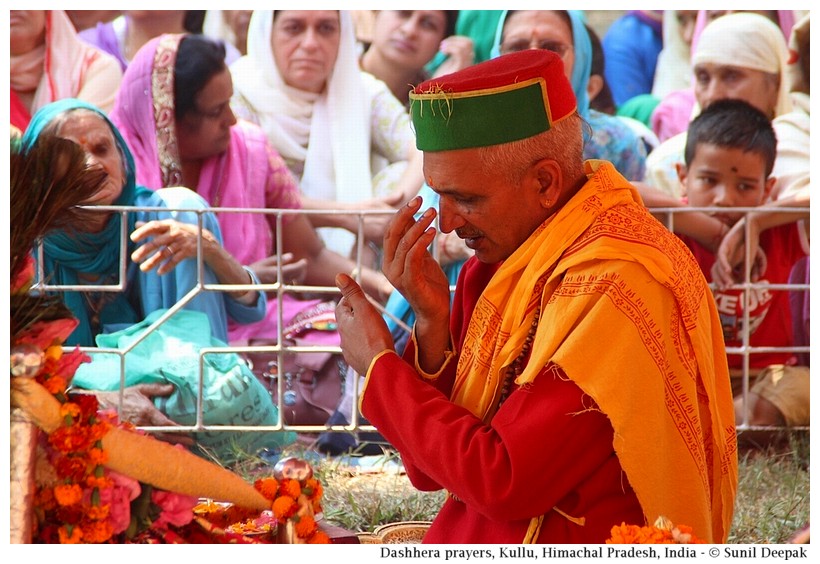 5. Hanta Koi statues, Nicobar island: Tribal groups in Nicobar islands in the Bay of Bengal have a tradition of making wooden statues called Hanta Koi to represent the spirits of dead family members. This reminded me of a similar tradition among the Toraja people in South Sulwezi island of Indonesia, where they call them Moi Moi.

This image comes from the Manas Sanghrahalaya museum in Bhopal (Madhya Pradesh), one of the finest museums about the lives, myths and culture of tribal communities in India. I find the red in the caps of the Hanta Koi very striking. 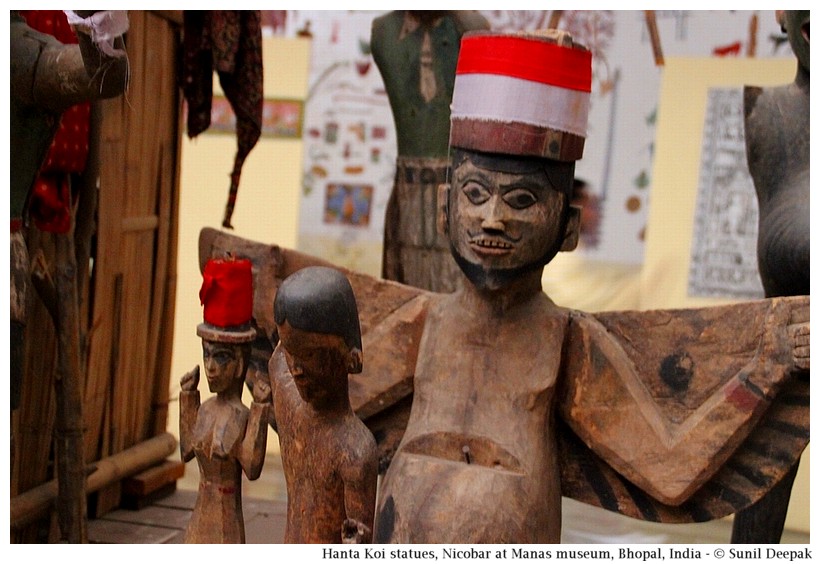 6. Rajasthani puppets, Delhi: While the above five images were linked to religious and spiritual spheres, the remaining five images of this post are non-religious.

The next image is of a puppet from Rajasthan at the Dilli Haat market of Delhi. Rajasthan with its Thar desert, craggy forts and proud people, is also a land of colourful costumes, as seen in the dresses of the puppets, among which red dominates. 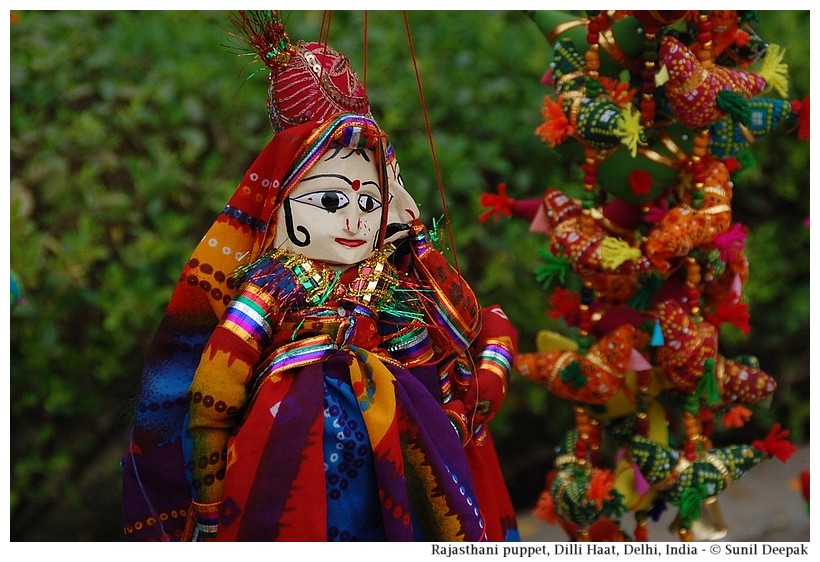 7. Monsoon, Bilaspur, Chhattisgarh: Monsoons are usually not associated with the red colour, instead they are seen as dark clouds and verdant foliage washed clean of the dust by the rains.

The next image is about the monsoon but it has a man dressed in red, walking in a field. It has a lot of green and very little red, yet I think that the red colour plays a key role in this image. 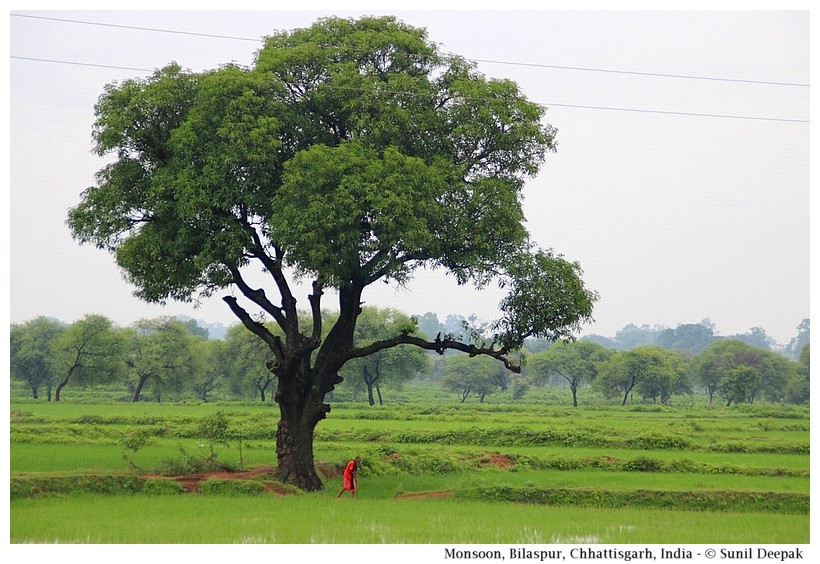 8. Village woman, Kesla, Madhya Pradesh: The next image is also from the monsoon period in central India and has a village woman surrounded by lush green fields.

The colourful saris of the women in rural areas are the most common source of bright colours in the Indian landscapes. 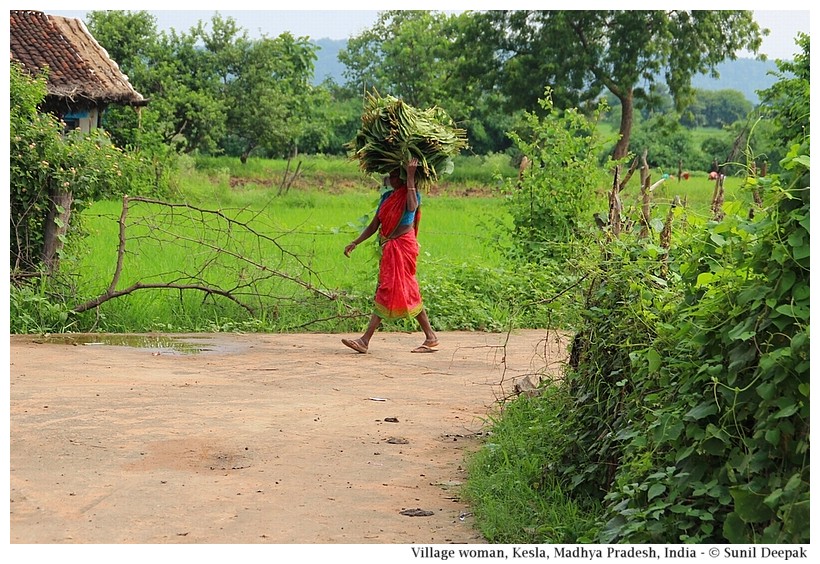 9. Police women, Guwahati, Assam: Even the khaki uniforms of the Assamese police women can have a nice touch of bright red colour. 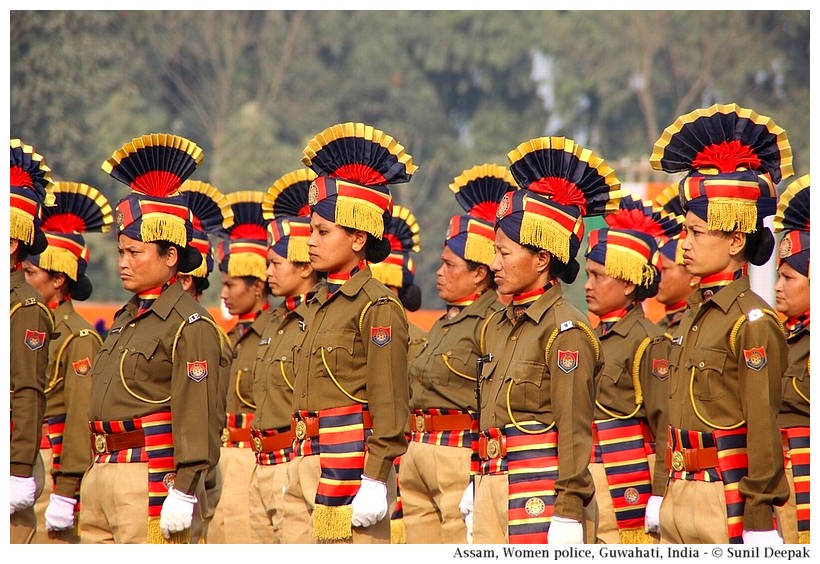 10. Lenin statue, Kannur, Kerala: I am concluding this post with another picture from Kerala where red colour is strongly associated with communism and where the communist icons like Marx, Lenin, Stalin and Chairman Mao, forgotten in most of the world, still continue to have some relevance.

Orderly processions of people walking with red flags and shouting slogans to protest against something are ubiquitous in Kerala. This image has the red communist flag along with a paper-mache sculpture of Lenin. 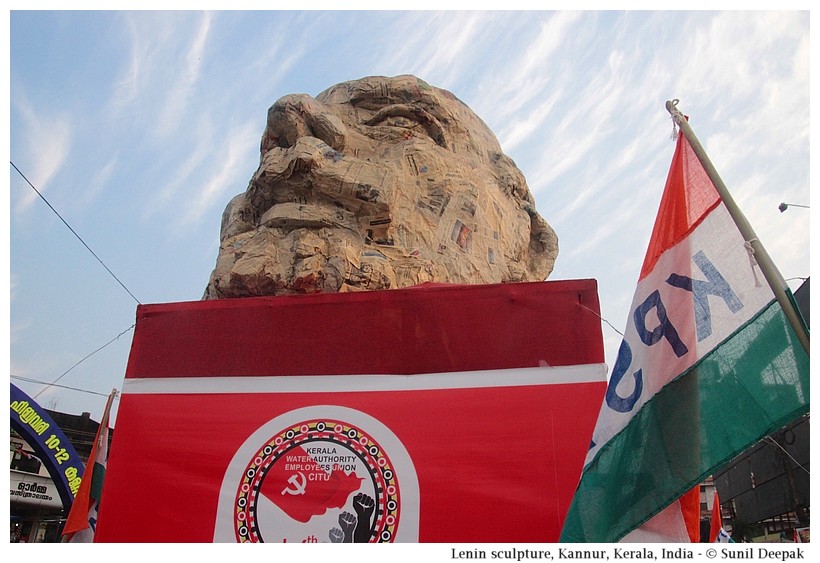 Think of the above ten images about the red colour as part of an Indian thali. They represent the amazing variety, colours and traditions of India.

All over the world, globalisation is helping in spreading a culture where people wear similar clothes, watch similar films and eat similar food. Even in India, the globalisation mono-culture is making in-roads. However, fortunately our diverse and distinctive cultures and traditions continue to be alive, especially in smaller towns and villages. Our challenge over the next decades will be to safeguard these while we embrace other aspects of modernity.

I hope that you will like my selection of images from India where red colour plays a special role. Do tell me which of these red images you liked most!