Funny chocolates cause scandal in Bologna

Bologna has rightly the reputation of being a very progressive and tolerant city, but occasionally something comes out and starts a scandal.

That is what happened, day before yesterday in the main city square. There was the annual chocolate fair that brings chocolate makers and people who love eating chocolates from all over Italy to Bologna for three days. It is a unique opportunity to taste special handmade chocolates in special tastes that you can't find in shops and superstores selling packaged factory made chocolates. 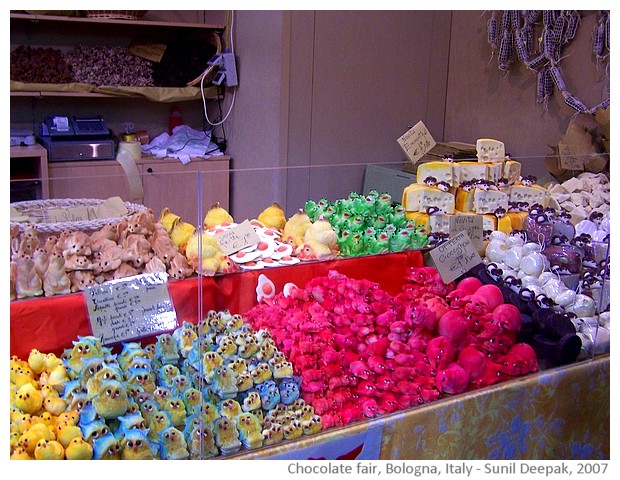 Walking through the shops in the chocolate fair, I noticed the crowd in front of Cristina's Roccociocco shop. She had a much bigger varieties of chocolates compared to the other shops, with specialities like chocolate covered cheese in different colours, bugs bunny shaped chocolates, etc. However, the most popular product of her shop were those penis shaped chocolates costing 10 Euro each. Couples wanted to get photographed in front of them, girls were holding them in front to get their pictures taken, giggling and laughing all the time. It seemed like innocent fun.

May be if I was new to Bologna, I would have got scandalised but with the Neptune statue right in the middle of the Bologna city square showing off the family jewels unashamedly and the story they tell about the prudish churchmen of sixteenth century wanting to cover it but citizens of Bologna voted to keep it that way, open and nude, perhaps I have also got used to similar sights.

Plus it is common to find penis shaped pasta, that is sometimes gifted for marriages & birthdays to the future brides and grooms. So I thought making chocolate in that shape was a nice commerical idea, also took a picture, moved ahead and forgot about it. 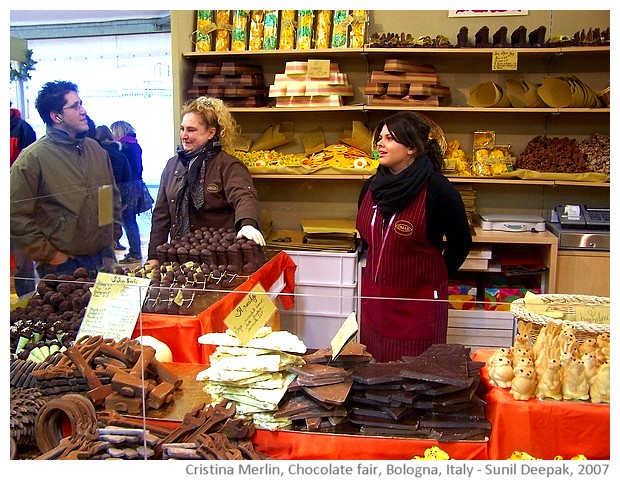 Next day morning when I read in the newspaer that one of our municiple council members, one Ms. Santandrea, had been to the fair, and had found those chocolates to be offensive and thus police was called, Cristina Merlin was asked to pay a fine of some 200 Euros and to remove those "penis chocolates" from her shop. As expected this has awakened some Bologna citizens who say that the chocolates are innocent and the council member is a hypocrite. Predictably, the church representatives have welcomed the "end to the depravity".

So if you want to have a chocolate copy of the Rocco Siffredi's endowment, you must now go to the city of Cento to Cristina's shop called Omar, because it will no longer be available in the chocolate fair in Bologna!