Finally it had stopped raining, as I went for the second day of the short films in competition for the Human Rights Night film festival of Bologna. The projection started with a bit of delay as we waited for Manli Shojaeifard, the Iranian director of one of the films in programme.
If on the first day, for me the theme of the films had been crossing some kind of boundaries, yesterday I felt that stories had less hope, they were about persons imprisoned behind barbed wires. Barbed wires that were there in their own minds or were built by circumstances, but in all cases there was not much chance of getting out.
The first film was "...She was no one" (director Manli Shojaeifard, Iran, 2002, 13 minutes). It was about a saint's tomb that is supposed to cure persons with mental illnesses and where people tie mentally sick persons with a chain and a lock, presumably overnight. Manli herself explained that to avoid problems, she had visualized this film in a more symbloic form, using symbols such as green wishing-threads tied around the tomb, the rosary and the burning candles. There were no dialogues in the film.
I personally had difficulty in understanding this film and afterwards, asked Manlie some clarifications. The main event of the film was the rape of one mentally ill girl left there by her family, by the caretaker of the tomb. This was shown indirectly, when a woman living near by, finds the girl on the ground near the tomb, having convulsions and closeby she finds the rosary left by the man.
However, even after understanding the idea of the film, I had trouble in visualizing that man raping the girl, since actor playing the caretaker of the tomb seemed like a kindly elderly gnome with laughing blue eyes. Perhaps they could have taken a different actor for this role.
People tying mentally ill persons with chains and treating them like animals is probably common all over the rural world, where there are few psychiatrists and little understanding of mental illness. Both mental illness and epilepsy are surrounded by myths, superstitions, stigma and discrimination. It does happen in India and a mainstream film like "Tere Naam" (director Satish Kaushik, 2003 with Salman Khan and Bhumika Chawla) had shown it very graphically. However, I am digressing here.
The second film was Alfred (director Leonardo Guerra Seràgnoli, USA, 2008, 17 minutes) about nightmares of a man called Alfred. When he was a child or adolescent, he was involved in some war. Hit by a bullet, enemy soldiers had left him on the ground thinking that he was dead. Now he is haunted by some unseen demons, probably unable to come to terms with fragility of his life or the fear of dying. 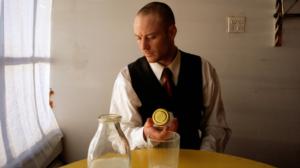 The film has beautiful photography and actor playing Alfred (Daniel Bell) looks suitably angst-stricken, shaving off his head, toying with tablets, fighting with his pillow, contemplating the darkness in his soul. At the same time, I found the film like a glossy magazine, great looking but a little artificial and lacking in soul.
The third film was Hungry God (director Sukhada Gokhale-Bhonde, India-USA 2008, 8 minutes). It was about a young boy (Omkar Gaekwad), his face made up like Hindu god Shivji with toy snakes around his neck, going around asking for food, looking hungrily as people buy or eat food, continue to offer food to the statues but no one takes pity on him.
The film is visually very beautiful, lyrical and the music helps in that. The first shot of boy looking at his own split image in the broken mirror can be interpreted as a metafor in different ways.
Child actor (Omkar Gaekwad) playing the part has eloquent eyes and the film pulls at your emotions. Yet, the film does seem a film, little artificial, a make-believe world and not about real poverty and hunger, perhaps because it is too beautiful. The boy is too well made, clearly he had professionals doing his make up, complete with fresh flowers and eye liners and this takes away from the authenticity of the film. 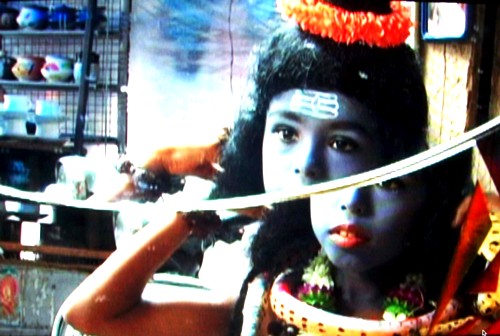 There was a similar figure of the boy, dressed like a god in the riots scene of The Millionaire (David Boyle 2008). Perhaps it is films like The Millionaire that change the way we look at poverty and slums?
The last film of yesterday was "Vida Loca" (Crazy lives, Stefania Andreotti, Italy 2008) about gangs of adolescents in some countries of central America like Honduras. This film is more of a straight forward documentary with some wonderful night photography and haunting images of eyes with pupils dilating as the young gang members talk about the three dots of their crazy lives in the space between the thumb and the index finger, signifying death, drugs and jail. 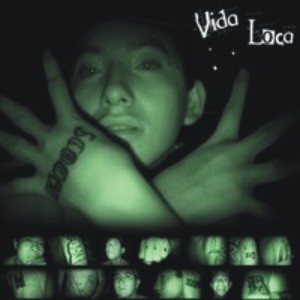 The story of two gangs, Rio 18 and Mara, extending from streets of central America right up to Los Angels, about illegal emigrants, drugs trade, violence and revenge shocks because of the hopelessness of their young lives, where killing or getting killed is the only real option they have. Seen as vermin, to be crushed and violated, the brutality of the prisons, recruiting new members of the gangs in the prisons seen as the gang headquarters, show the effect of the repressive harsh ways of dealing with the issues. Social workers and rehabilitation centres show a faint glimmer of hope as some persons do manage to go out the narrow confines of the gang-thinking.
The film ends with the haunting laugh of one of the adolescent gang member, who had been talking about his lack of fear of death, that we was ready to  kill and to be killed, as he asks, "Help me to change". His heart-breaking smile and the hopelessness of his situation is what remains when the film is over.
Among the four films seen yearday, I liked "Vida Loca" most.
Posted by Sunil Deepak at 06:15