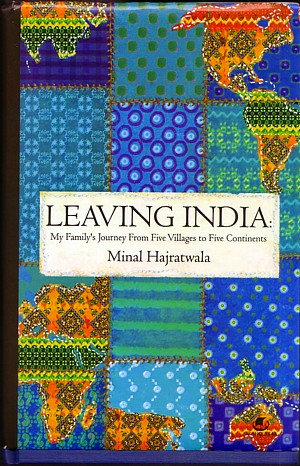 At one place in the book, Minal says, “Deep in the marrow of every story is a silence”. Perhaps, it is there, in that silence, that the reader and the author can meet and talk, about what was left unsaid and what can not be expressed in words. In that sense, it was particularly hard to read “Leaving India – my family’s journey from five villages to five continents”, because our parallel dialogue in that silence was at times so intense.
When I start realising that I am liking a book and that I would like to write about that it, I start bending the corners of those pages that have particular passages that touch me in a special way, so that when I write I go back and refer to those particular passages.
In “Leaving India”, I have marked so many pages, that if I try to write all the feeling they evoke in me, probably I will end up writing a bigger book. So I will not even attempt to write all those things.
I read it almost in one go, over a period of three days. And, I had to stop myself at times, to put aside the book and go for a small walk, just to think, and also to prolong the joy of reading it.
Minal’s family’s journey starts from five villages in south Gujarat, at a time when there was no state called “Gujarat”, in late nineteenth century. Poverty and dreams of making a mark in far away parts of the British empire, take away the men, leaving their wives with their children in Gujarat. Slowly, the wives also follow their husbands and then as fortunes of the empire change, and new opportunties arise, the emigrants change homes, searching for more hospitable lands where they can grow their families in peace and dignity.
Among all the stories, the one which touched me most was the story of Bhupendra and Bhanu, Minal’s parents, probably because I could empathise and understand more the kind of problems they went through. Among all the pages that I had marked, I have decided to take one passage from this part of the book that touches on the challenges and opportunities that emigration experience can give us:

In New Zealand, Bhanu might have become small and huddled; our lives there were always slightly shabby, as if the gray of the skies had settled over our skins, clothes, hopes. In Fiji, she would have been one of the several daughter-in-law, bickering for position in a chaotic and quarrelsome extended family. In India she could have lived a life of middle– or upper-class privilege, with ahousehold of maids to supervise.

In America my mother bloomed like a tropical flower, colourful, with a thick, strong stem, petals as sturdy as bark....

Slowly we became – all four of us – American. For Bhupendra and Bhanu this would become clearer with each visit to India or Fiji. Although they tried to blend in, to do as the locals did, the mask was less and less perfect. The changes were physiological: they oculd not drink the water, had to be careful about what they ate ... The changes were also psychological. They found they simply could not understand why certain things were as they were, how people could stand to live that way.

You don’t need to move to USA to realise that you have changed. Shifting from Patna to Delhi or Mumbai can change you equally. Going to university, living on your own, every change marks your difference. In that sense, you don’t need to be an emigrant to understand what Minal is writing about.
Minal’s own journey as a second generation emigrant growing up in USA, was also interesting since through it I could imagine a dialogue with my son and see his growing up experinece. He himself would never talk of such things with me, and unless he decides to write a book about himself one day, I have no way to enter that world.
Minal’s own journey is much tougher, I think, compared to my son’s journey, since it is linked to her struggle to live her sexuality that doesn’t fit in with the heterosexual “normality” of the traditional family.
As the world globalises, I think that Minal Hazratwala’s book tells a story that is more universal, that can be understood and felt by all those who move away from the places where they grew up, from villages to the cities, from one country to another.
LEAVING INDIA, My Family’s Journey From Five Villages to Five Continents, by Minal Hajratwala, 2008, published by Houghton Mifftin Harcourt company USA e Tranquebar press India.
Posted by Sunil Deepak at 18:45