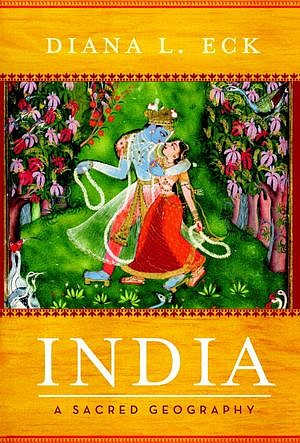 Thus I discovered some Indian myths and stories that I had not heard about before. For example, ancient Indians believed that a mountain called Meru was the centre of the world. This Meru or golden mountain has eternal light and is connected to the polar star. It is un upside down mountain, narrow at the base and wide at the top. At its top are homes of the gods, especially the homes of Brahma and Shiva. The celestial Ganga river falls from the heavens on top of Meru and then divides into four rivers and goes in four directions, including Alaknanda going towards India. All the four Ganga rivers are equally holy. There are 4 continents, shaped are like four petals of a lotus flower around the Meru mountain and the southern petal is Jambudwip or Bharatavarsha (India).

Diana Eke explains in great detail these ancient beliefs and describes how this conception of the world was completely different from the world conception of other ancient civilizations:


Since Meru is king of the mountains in a confluence of mountain ranges that is the most awesome on earth, it is all the more arresting that Hindus do not derive their symbolic image of Meru from the great granite and ice peaks of Himalayas. Rather it comes from the living, organic world of flowers. Meru is the "seed cup" (Karnika) of the lotus of the world." ...

Bharata is the southernmost land of this lotus world. India's imaginative world map does not place India directly in the centre of the world as did Anaximander when he drew the first world map with Greece in the centre, or the medieval cartographers when they placed Jerusalem and the holy Land in the centre, with continents spreading forth like petals. Rather Bharata is but one of of the petal continents. In many ways it is the least glorious. Far from the usual ethnocentrism in which one's own world is described as civilized, while the surrounding lands, vaguely known, are thought to be less so, even barbarian, the Indian visionaries who described the world actually idealized the other petals of the world ...

Why don't the Indian school books say anything about ancient Indian traditions?

While I was reading this part, I was thinking that I am close to sixty years and this is the first time that I am reading about the worldview of the ancient Indians and about India's place in its geography. I felt a little cheated that our schools or colleges did not talk of these myths of ancient Indians and how these could have shaped our present world views and our ways of thinking?

I am not saying that we have to teach to school children that this is the geography of the world or that we should not teach them about modern geography. Conservative Christian groups in USA or conservative Islamists in different parts of the world or even Hindutva groups in India have those kind of ideas where they want that school children be taught what is written in ancient religious books, and not what the modern science has taught us. I do not agree with those ideas.

Rather, I am thinking that while we learn the modern geography and science, we should also learn about the ancient Indians myths and stories. Not as blind beliefs, but we should learn to look at them critically. This is needed to understand how these beliefs were different or similar from the beliefs of other ancient cultures, and how these could have shaped the development of Indian society.

A cultural understanding of societies

This does not mean that we have to take them as the absolute truth, but it also means that they should not be devalued and forgotten. I am arguing for a middle way between the extremes of strident Hindutva and the denying-the-religions kind of secularism?

I agree that these ancient beliefs are Brahmanic beliefs. For centuries these beliefs have excluded large sections of Indian society, especially those who are considered "low castes" and tribal groups. Thus I am not saying that these are the "only" beliefs of ancient Indians. Yet given their pervasiveness in significant parts of Indians, these can not be wished away.

I also believe that parts of these ancient beliefs need to be changed. For example, Hindu scriptures propose a particular role for women and girls and they espouse a particular role for those they call as "low castes" and ask for their exclusion and exploitation. I don't think that respecting our myths and ancient stories means accepting these aspects of our culture as right. Rather, I believe that we need to change with times and look critically at how we deal with issues like dignity of individuals and dignity of labour and change our societies. But to criticise aspects of scriptures or to ask for change, does not mean that we hide or ignore parts of our history and traditions.

In a way, I feel that persons asking for Hindutva are actually blind to Hinduism's pluralistic traditions and tend to look at religion and culture through linear-rational way of thinking where they dream of homogenizing Hinduism, like a parody of monotheistic religions. Thus while they talk of saving Hinduism, in reality they work for destroying it.

The past few centuries have seen the rise and domination of western way of thinking that is linear-rational way of thinking. It has brought great progress in the world including science, technology and even the modern ideas of human rights and equality of human beings. This western way of linear-rational thinking is important for all of us as part of our education, science, industry, etc.


It seemed to me that Srikanda had mentioned three quite different ways in which an inanimate statue could become a god: via the channelling of divinity via the heart and hands of the sculptor; a ceremony of invocation when the eyes were chipped open; and through the faith of the devotee. I pointed this out to Srikanda, but he saw no contradictions; all that mattered was that at a certain point a miracle took place and the statue he had made became divine.

Sometimes, this non-linear and contradictory way of thinking confuses western students of Hinduism and Indian culture. Such confusion is also apparent in relation to philosophies of other oriental religions including Buddhism, Jainism, Sikhism, etc.

For example, I remember some discussions with friends of other religions where they felt that because of multitude of gods and goddesses and because of idol worshiping, Hinduism is in some way inferior to their ideas of one god, or at best, it is is an illogical way of thinking. I think that they look at Hinduism in a linear-rational way of thinking and can not appreciate the Indian non-linear way of understanding the world that feels that "this and its opposite, both can be true".

Should this non-linear and contradictory way of thinking be considered inferior or should be ignored and forgotten?

I also believe that the Indian ways of thinking has its own value. For example in the way we traditionally deal with nature. From ants and mice to owls and peacocks, ancient Indian beliefs look at insects, birds, plants and animals as sacred. This can be seen as superstitious or illogical by the western thought. However, looking at birds or plants as sacred, can also be seen as respecting the world and creating a harmonious relationship between humans and nature.

Breaking out of cultural colonization of minds

I feel that we have a kind of cultural colonization of our minds, where we pretend that only western linear-rational way of thinking exists, and world needs to be understood exclusively according to this logic. The non-linear and apparently contradictory thinking pervades our cultures, but we pretend that it does not merit acknowledgement or understanding.

We need to break free of this cultural colonization and learn to look at our ancient myths, stories and traditions as living paradigms that influence and shape us even today.

For example, I would like to learn about how the ancient Hindu myths were translated in Jain and Buddhist traditions? Did they influence early Christianity when it came to Kerala with St Thomas, two thousand years ago? Did they have an influence on Muslim-Sufi and Sikh philosophies? Did they shape the way Indians look at the world today?