My best images of horses

As the title says, this post is about the best images of horses in my picture archives.

The idea of this post came a few days ago, when I was in Rome. It was evening and I had walked through the gardens of Villa Borghese, and reached the Pincio terrace. There was an exhibition of the sculptures by the Mexican artist Javier Marìn, including some sculptures of horses. The evening light, the view of Rome skyline and the horses lined up as a medieval army marching on to Rome, they had all combined to make it an incredible emotional experience.

(1) The first image is of St. Nicholas, the patron saint of Cech republic, from Prague. Warriers on their horses have been a popular theme for cities to show off their glorious pasts. Most images of horses reflect this very male way of celebration of national pride. Usually women are missing from such sculptures, or they are sometimes shown standing close, looking with admiration towards the great warriors. 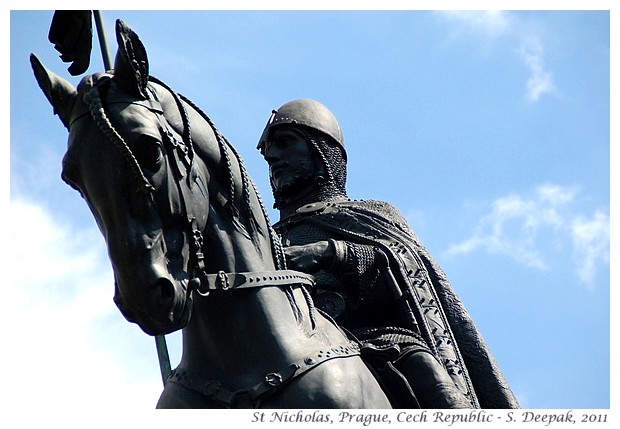 (2) The next two images are from Cape Town in South Africa. The first one has two naked young men with a horse in the middle. Once again, here horse is a symbol of male power and strength. Again this is a common way of expressing power of youth by putting together a horse with a nude male figure, as you will see from many images below. 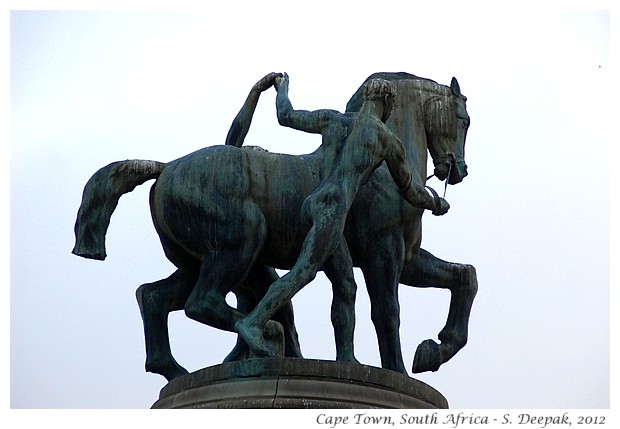 The second image from Cape Town is that of an old style merry go round for children. I like the three horses with 3 different expressions of this image. 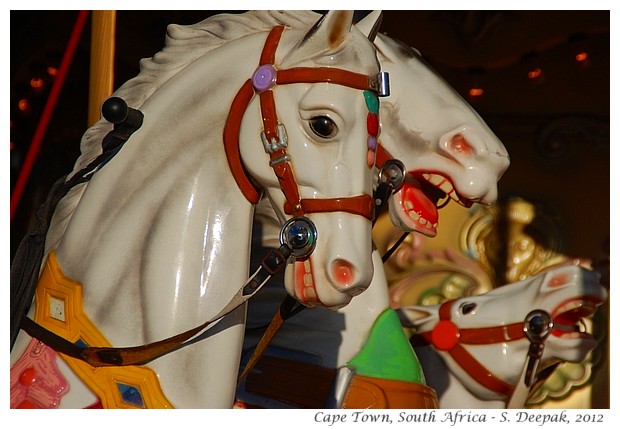 (4) The next two images are from Geneva in Switzerland. Both are from the garden on the left bank of Le Man lake. It is a beautiful stretch for a walk that brings together lake and gently rolling hills on one side, verdant grass, beautiful flowers and art pieces on the other. If you are ever in Geneva, remember to keep at least half a day to explore it.

The first image has once again a horse with a nude young man. 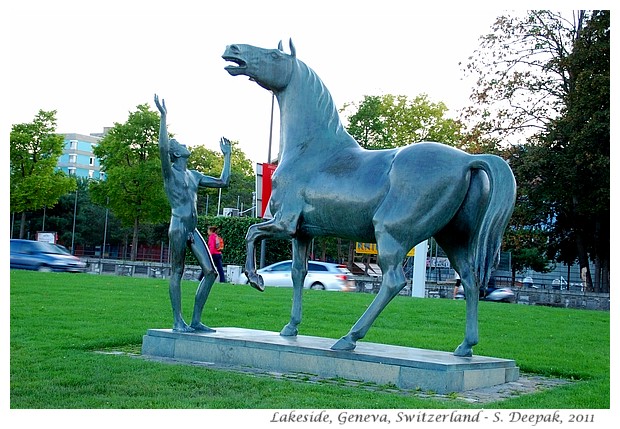 (5) I love the artististic horse of the next image from the lakeside in Geneva. The two ridges on its snout, expressing man's control and domination of the animal, touch a deep emotional chord in me. In the beauty of its art, I feel the anguish of the animal. 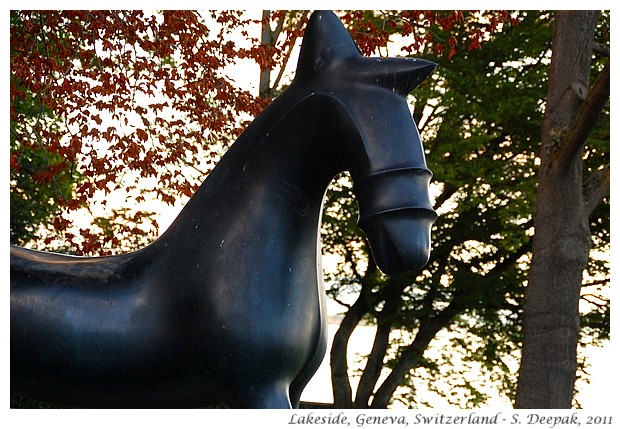 (6) The next image is from India and is the only female figure sitting on a horse like a warrior. I saw this statue in Agra. It has Jhalkari Bai, the soldier in the army of Rani Jhansi in the fight against the British in 1857. She had dressed as the Queen of Jhansi to create confusion among the British soldiers. 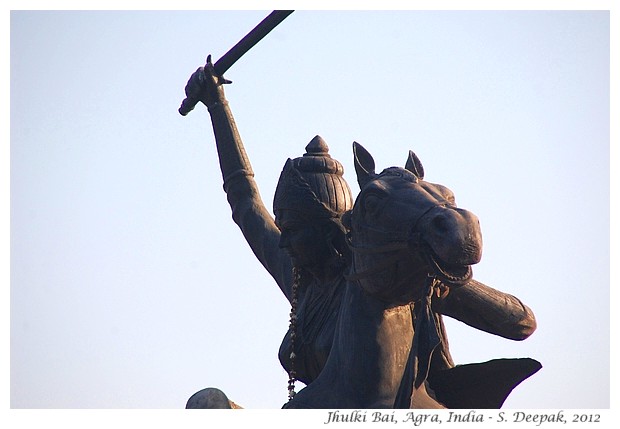 (7) The next two images from Lisbon in Portugal and are supposed to glorify Portuguese warrior-kings. I like the background of the castle behind the horse. 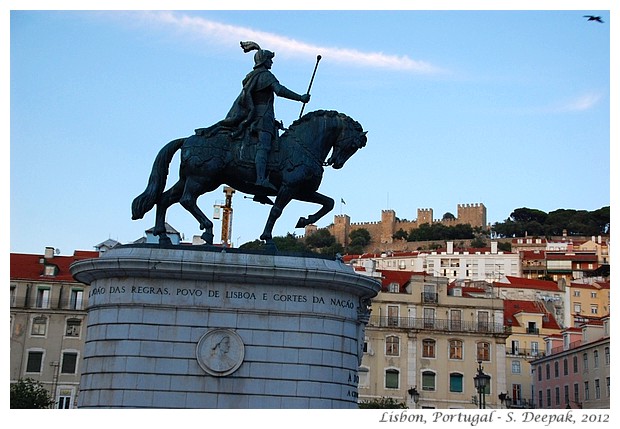 (8) The warrior king on his horse from Lisbon, Portugal. In front of the sea, this is one of the most beautiful squares in Portugal and rich details of the staute express the colonial power. 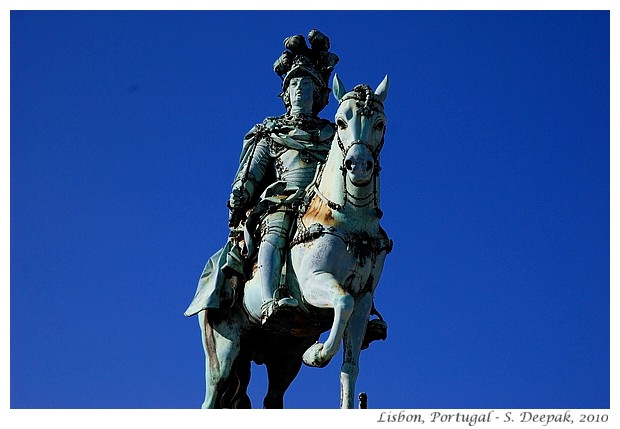 (9) The next six images are from London (UK), a city rich in equestrian statues. The first one is a Roman statue, with a nude man sitting on the horse. I love the way the light from the transparent dome of British museum, gives this marble statue a distinct greenish tinge. 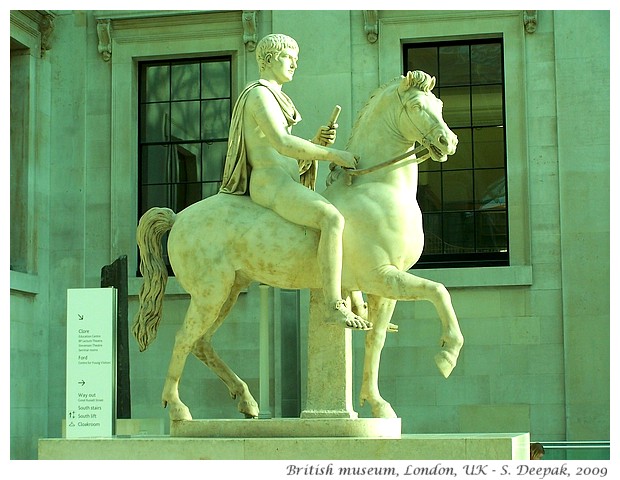 (10) The stylized horse and the nude man sitting on him from Kensington gardens in London is another favourite. 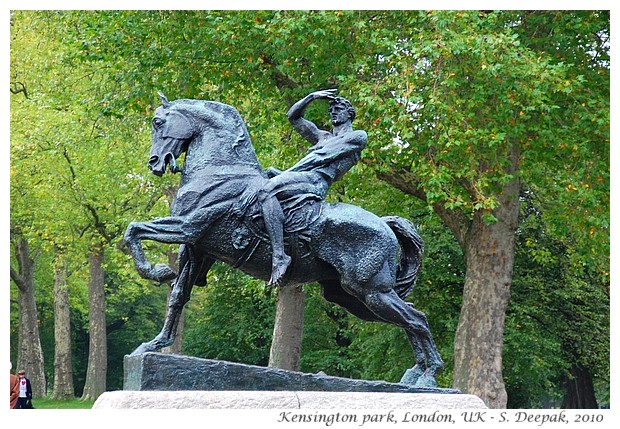 (11) The head of the horse in Marble Arch in London is both horrifying and magnetic. It reminds me of a scene from Mario Puzo's famous book Godfather. 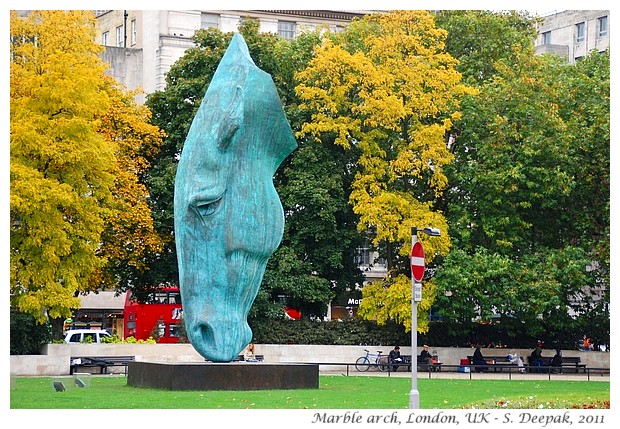 (12) New parts of London around Greenwich are full of glass and steel skyscrappers all around the river Thames. This image has the half man and half horse figure from the Greek mythology. 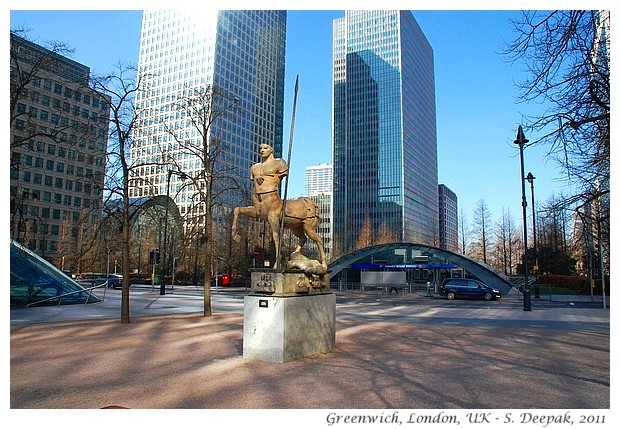 (13) The next image is from a road near Piccadilly in central London. I like the way the General sitting on his horse seems to be admiring the Greek looking paintings on the house. 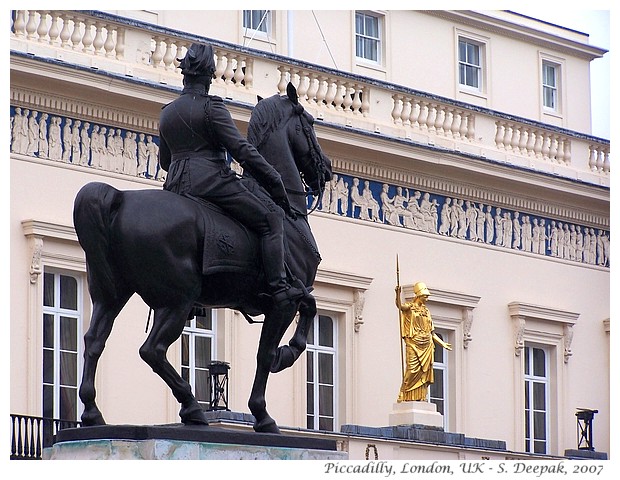 (14) The next image has once again a children's merry-go-round, this time it is from Covent Garden in central London. 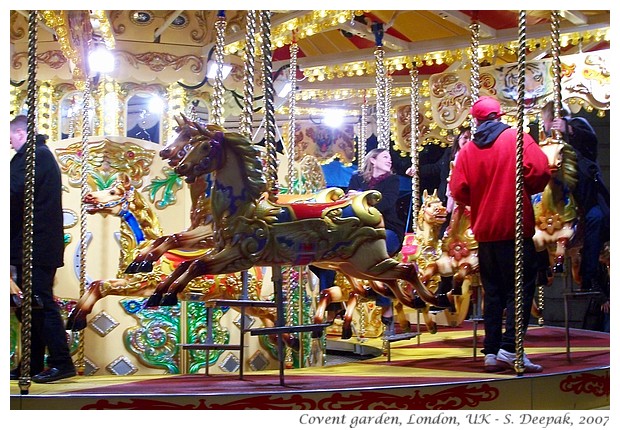 (15) Next image has the Mongolian hero Changis Khan, not far from the national capital Ulaan Baator in Mongolia. This statue is huge and there is a lift inside it, just like the statue of Liberty in New York. So you can go up the statue and take a walk along the man's crown and along the back of the horse. 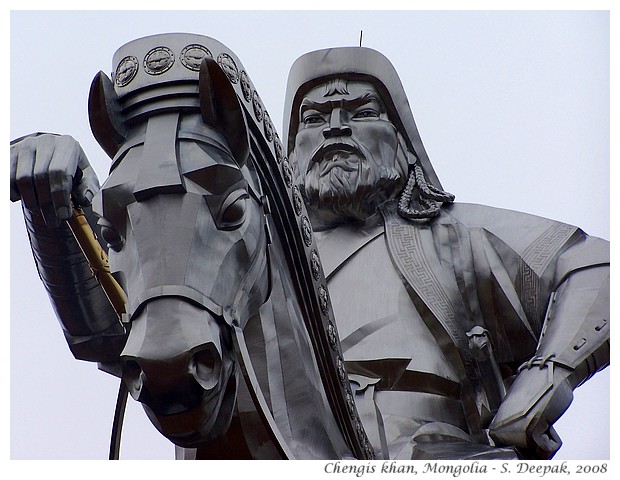 (16) Next image, once again from Mongolia, is the only image of a living horse in this collection. I often take picture of horses in the countries I visit, but somehow I have never managed to take a picture that I really like. The only exception to this was in Mongolia, where I took many pictures of Mongolian pastors going around on horses, that I had liked. From those images I have chosen this one as it gives an idea of vast open spaces, where lives of animals and people are closely intertwined. 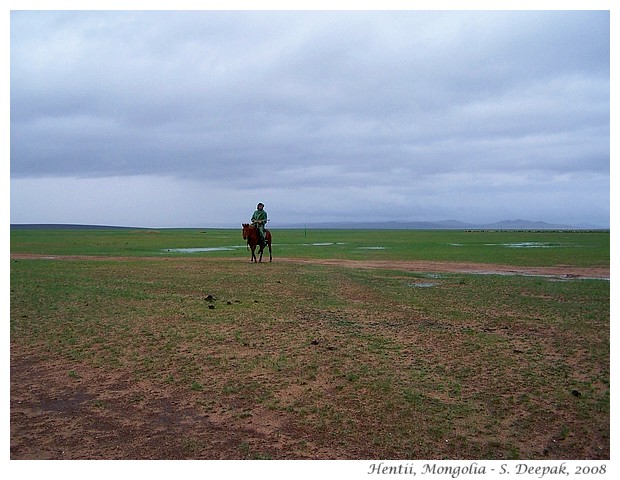 (17) The next 4 images are from Vienna in Austria. Like London, Vienna is also very rich in equestrian statues, expressing the power of its kings. I like the green colour of Bronze statues very much. 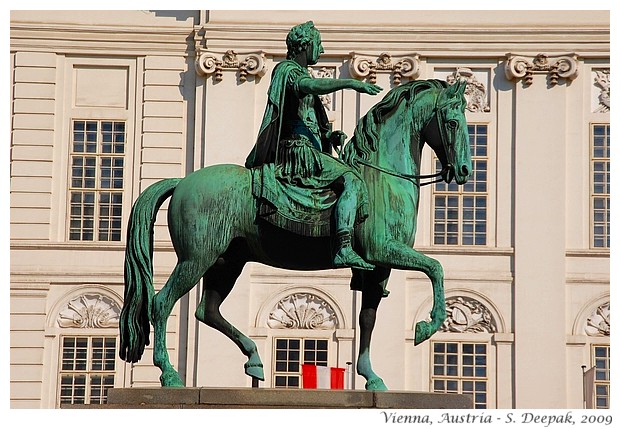 (18) The image below is a close up of the image above, the patterns created by the green of oxidized bronze are easier to see here. 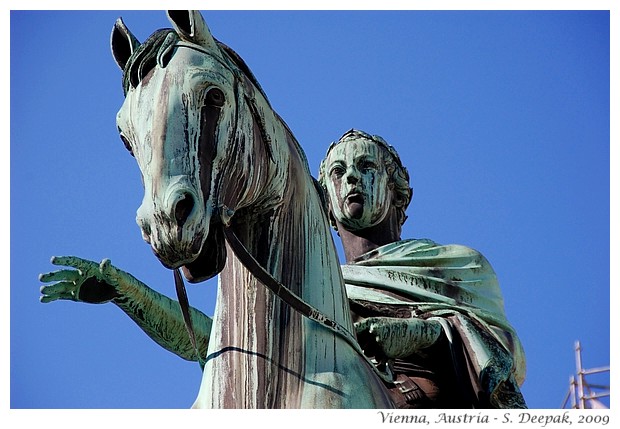 (19) The next image from Vienna is the only one where the man sitting on the horse is expressing wealth rather than warrior's power and courage. In a way those noble men with their wigs and fineries were the precurosrs of metrosexual men of today. 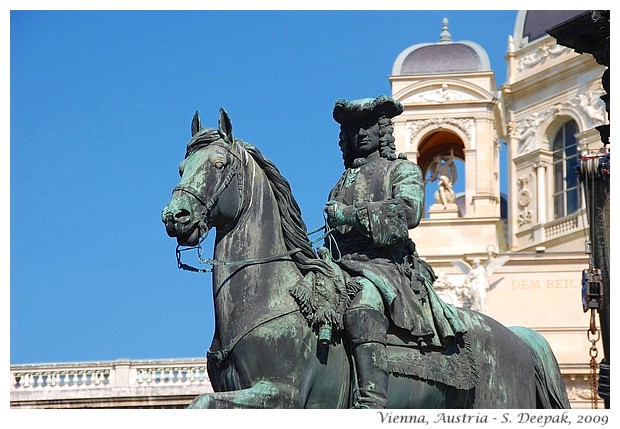 (20) The last image from Vienna is a variation on the horse with the youthful nude. Somehow this nude figure gives me an impression of being a woman, but I am not sure about it. 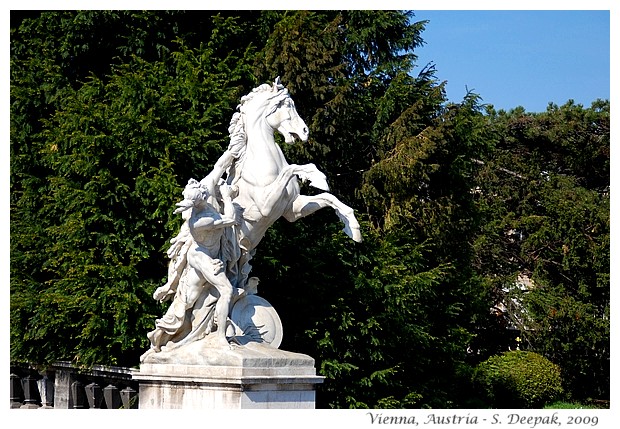 (21) The next image is from a Buddhist temple in Hanoi, Vietnam that shows a paper horse made as an offering at the temple. Such paper animals are burnt as part of prayers. 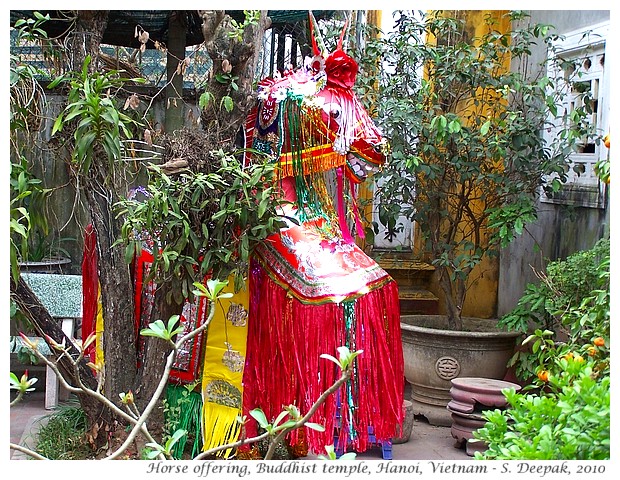 (22) The next four images are from Italy. The first one is from Assisi and has St Francis as a child from a noble family sitting on his richly decorated horse. Both the man's and the animal's posture reflect introspection, the desire to leave the world's possessions and to devote their lives to spirituality. 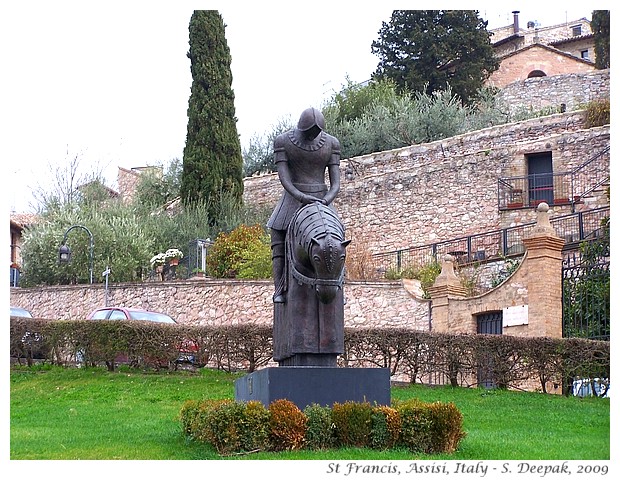 (23) The next image is from Capitol hill in Rome, and it has the mythological figure of Castor, one of the twins of Gemini constellation, guarding the entrance to the building. 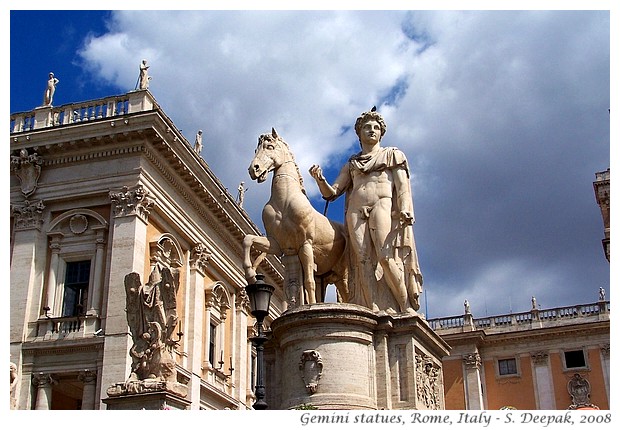 (24) A detail from the beautiful Trevi fountain in Rome that has a man with the conch and his horse. This figure also looks mythological, though I am not sure if it represents a specific figure. 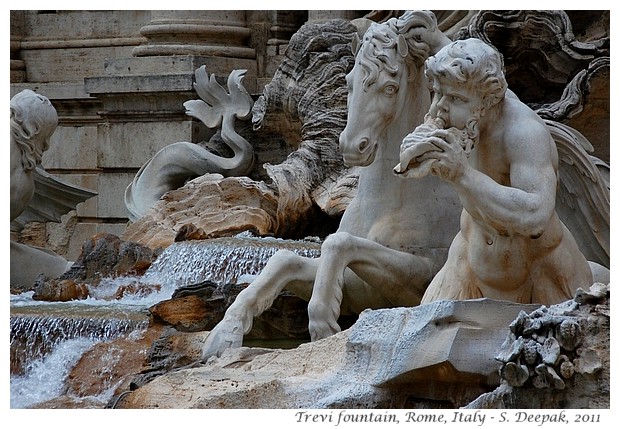 (25) The last image of this collection is that of sculptures by Javier Marìn on Pincio terrace in Rome, that had triggered off this reflection and this post about horses.

Just looking at this image gives me goose pumps as it reminds me of my experience from that evening in Rome. 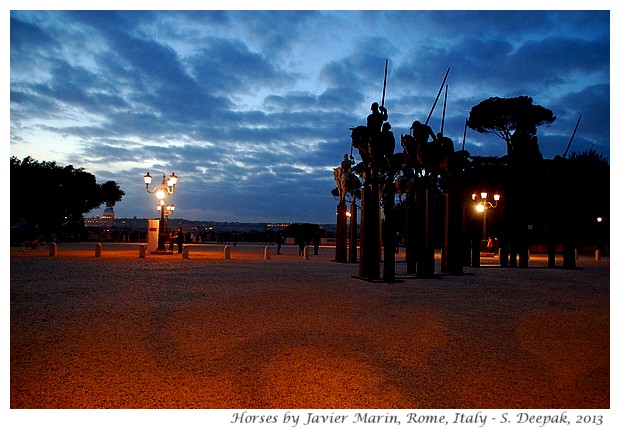 So I hope that you have enjoyed this trip through images of horses from different countries, as much as I have enjoyed putting it together.
If you want to read my diary of the Rome visit that stimulated this post, you can read it here.
***
Posted by Sunil Deepak at 11:32