Walking through the London streets

I had the whole afternoon free. The flight to London was half empty.

It was a little strange. Before, there were five flights daily from Bologna to London and now there are just two, and yet there were so many unoccupied seats on the plane. Perhaps it had some thing to do with the cost of the British Pound in comparison to the Euro? Or, since the US dollar is now so cheap, perhaps all those who were going to UK now prefer to go to USA?

Any way, I was in London so let me just talk about that rather than make gloomy predictions about apparent decline of the British economy!

I had a whole afternoon and I decided to walk, starting from the Victoria station and taking Buckingham Palace road that goes behind the palace. It was probably the time of the daily exercise for Her Royal Majesty's horses and ponies, since horse driven carriages were coming out of a side gate, going around the palace and then going back inside from the side gate on the Buckingham Palace road. May be it is someone from the royal family dressing up as Her Majesty's staff and going out in incognito? Knowing the scoop hungry British tabloids, I don't think the British Royalty would try that, but just in case, I decided to click a few pictures. 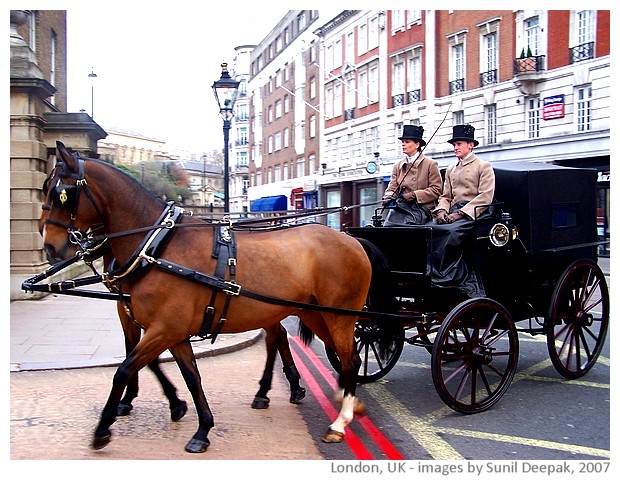 The guards outside the Buckingham palace, no longer carry those big furry caps made of bear fur. I agree completely that you can't kill and clean the earth of the poor bears just for those caps, but with all the punks and other creative talents in UK, couldn't they design some nice but unusual new cap for these guards? The ones they have now suck big time. Perhaps Her Majesty would read these lines and find a way out? 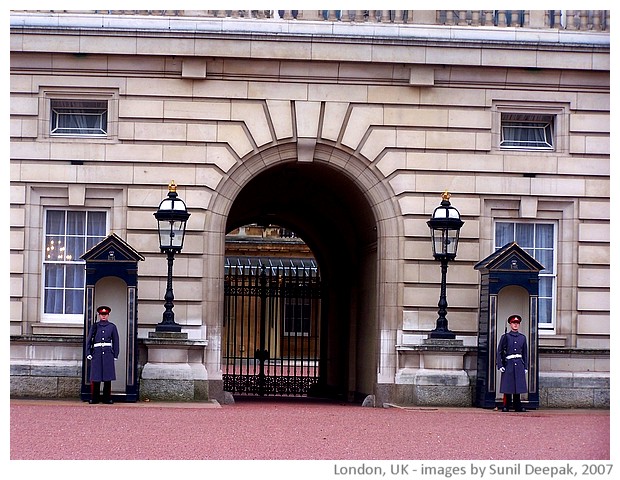 The park with the small artificial lake outside the Buckingham palace was full of water birds. Most of the time I can hardly tell the difference between ducks, swans, canadian goose, graynecks, etc. but there were some boards there showing the different species with their names. Like the ones in the picture below are called Coots. 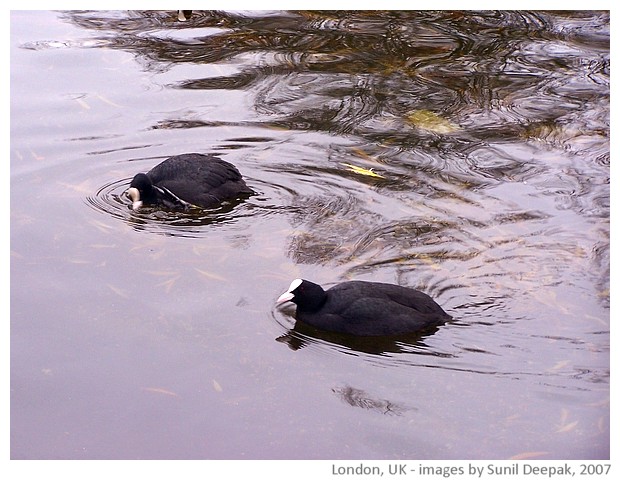 As I walked around the Horse Parade ground, it had started to rain. Actually I had checked the "weather in London for next five days" that morning on the BBC meteo site, it had shown a warm sunny day and thus being trusty and gullible, I had not taken any umbrella with me. (Do you think that they would do it deliberately, just to boost the sales of umbrellas? And so, when they are sure that it is not going to rain, they predict heavy rains and thus you go out all covered with umbrellas under your arms and under the sun, feel hot and bothered, and thus boost the sales of London pubs?)
So when it started to rain, I gave up my plans for going towards Downing street, and instead, hurried towards Waterloo place, finding these nursery teachers (?) with all the small kids in triplet prams. Probably they had also checked the weather at the BBC meteo site for planning their picnic? 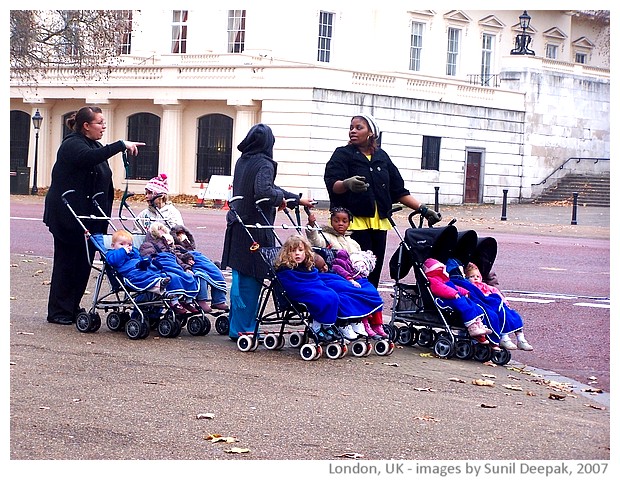 In the Waterloo place, there was this statue of the Lord John Lawrence, "Governor of Punjab during the sepoy mutiny of 1857" and there are some other statues of the valiant soldiers of Her Majesty's army who had brought the civilization to our poor natives of India and other corners of uncivilized and unknown world. Anyway, there was no time to stop and thank them for their spirit of generosity, brotherhood and unselfish kindness towards mankind and instead, I rushed towards Trafalgar square. 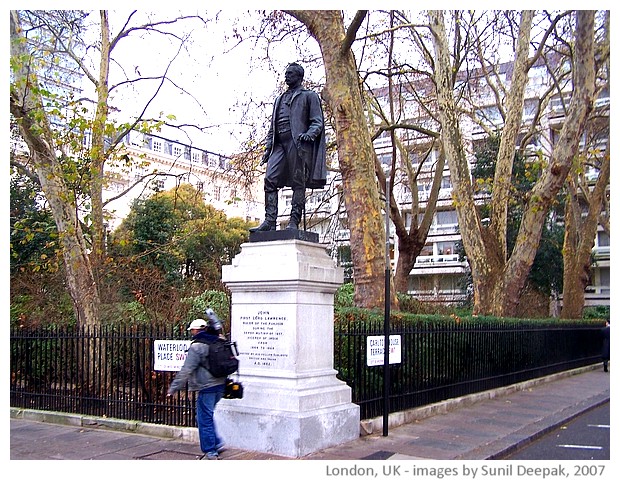 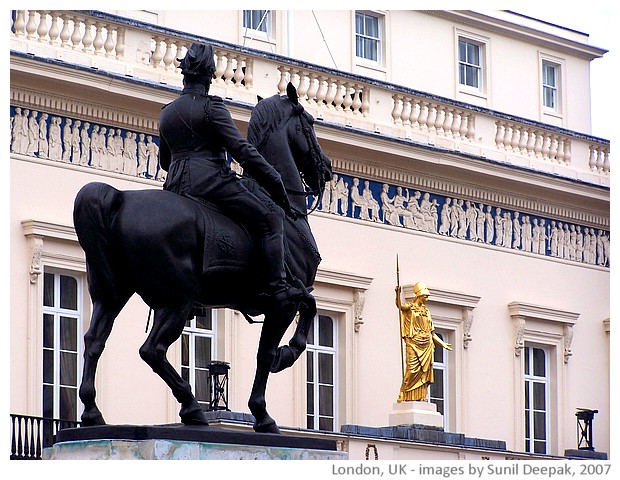 In Trafalgar square, the statue of disabled pregnant woman is gone. In its place is a strange sculpture that made me think of Jewish Hanukkah rising up from an Egyptian pyramid. Perhaps it is the British way of assuring the multi-culturism for the non Christians, who are "offended" by the christmas tree there? Or it is just me feeling cynical? 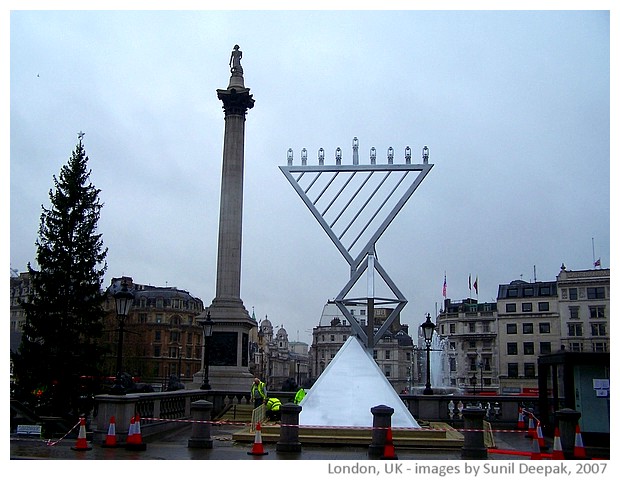 Anyway, I did not dwell on my nasty thoughts and found refuse from the rain in the Gallery of Modern Art (lovely website they have for exploring their masterpieces through web).
Renoir, Van Gogh, Pierro della Francesca, Seurat, Monet, Cèzanne, Caravaggio, Rubens, ... by the time, I came out the art museum my head was exploding with the beauty of art and my feet were killing me, but it was not raining any more.
It was already dark. I sat down in a bar to drink some beer and then off I was in the underground to Westminister for the second part of the walk. Riverside by the night, that was my objective. The projector above the street outside the acquarium next to Dali museum was projecting pictures from the acquarium in the street. It was strange to stand on the picture and to feel the fishes moving around on my body.
The riverside with the British Airways' London Eye, British Petroleum's Big Ben, MacDonald's British National Theatre, (ok, I am making some of these up but it gives you an idea) etc. were full of twinkling lights dancing in the reflections on the Thames waters (all these sponsorships must have inspired the Indian politicians! I had thought that Medha Patakar was exagerating but according to Outlook, Maharashtra Government is considering "selling" 200 plus km stretch of a river and dam to a private company and Chattisgarh Government has already sold 23 km of another river. I am waiting for the discount sale of parliament seats now.)
Anyway, sorry for the digression, enjoy the pictures of London including some images of the south bank of Thames in the night. 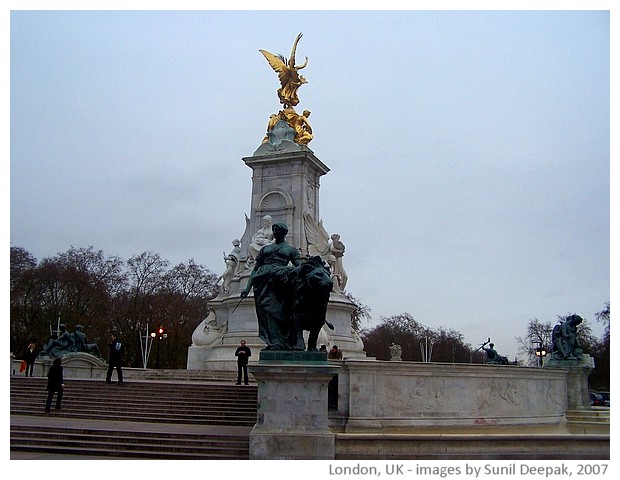 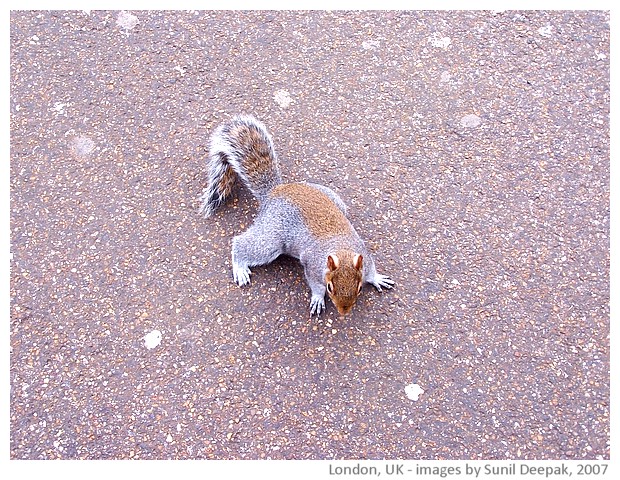 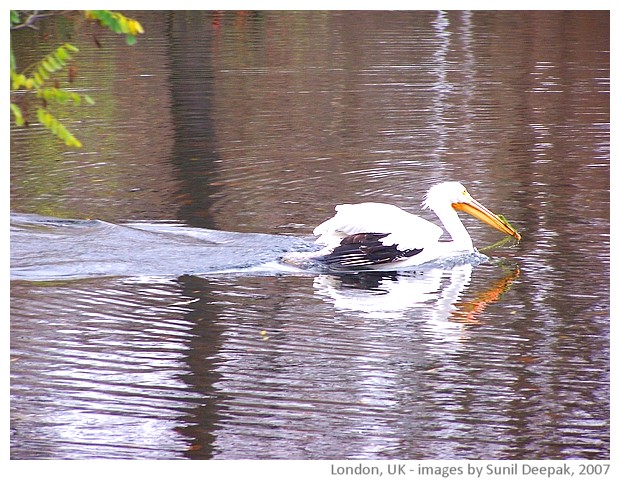 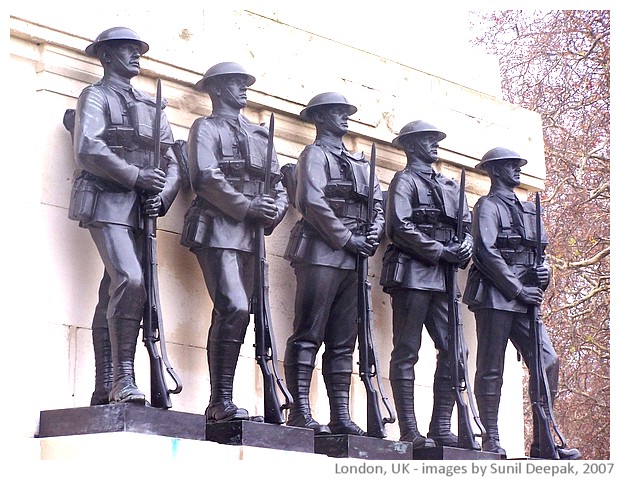 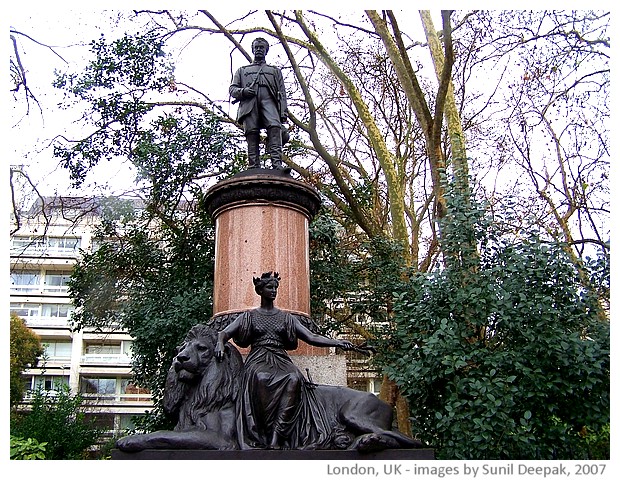 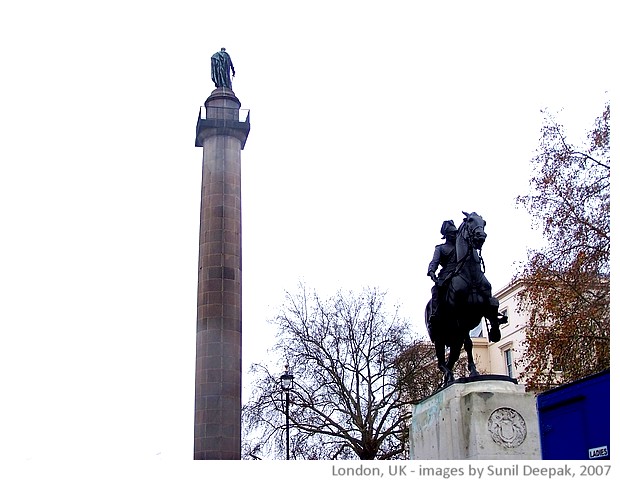 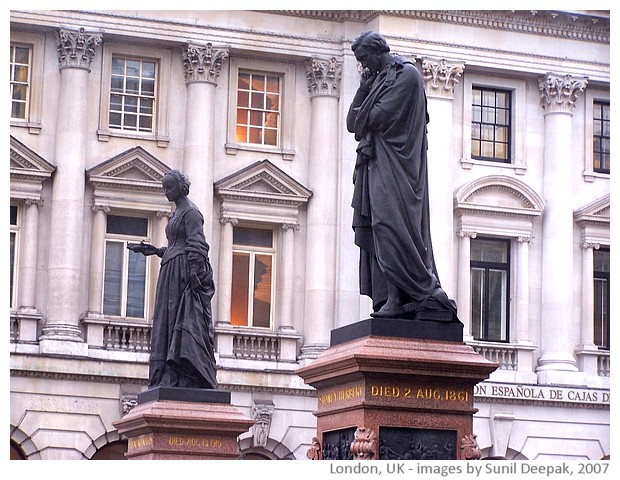 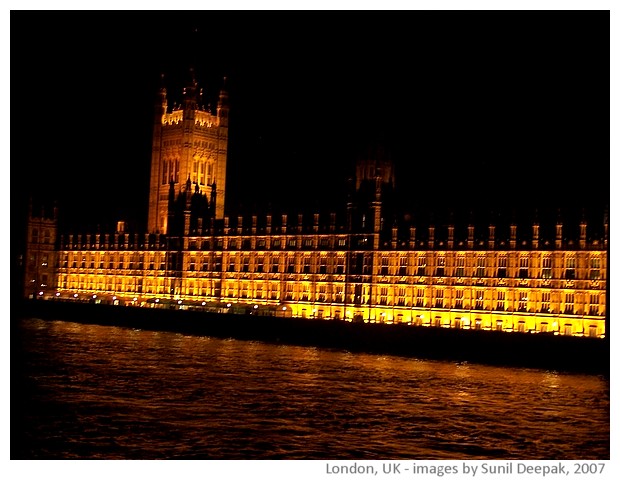 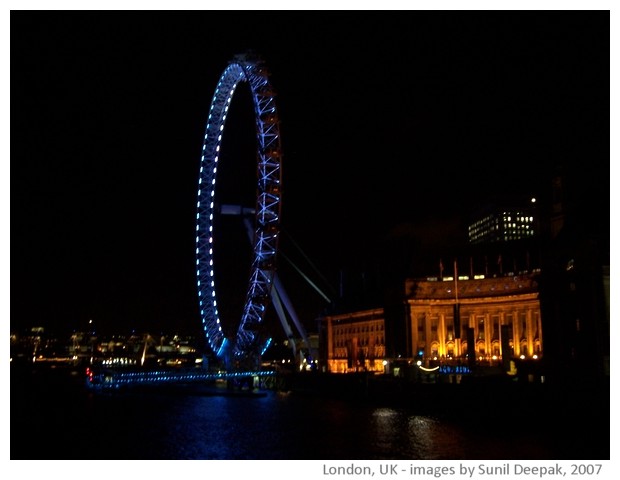 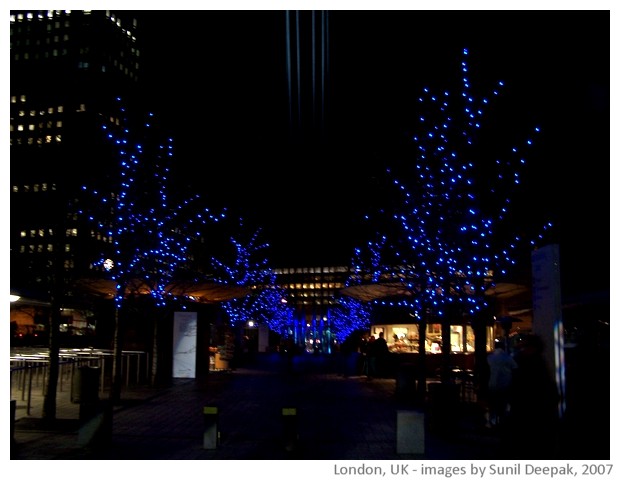 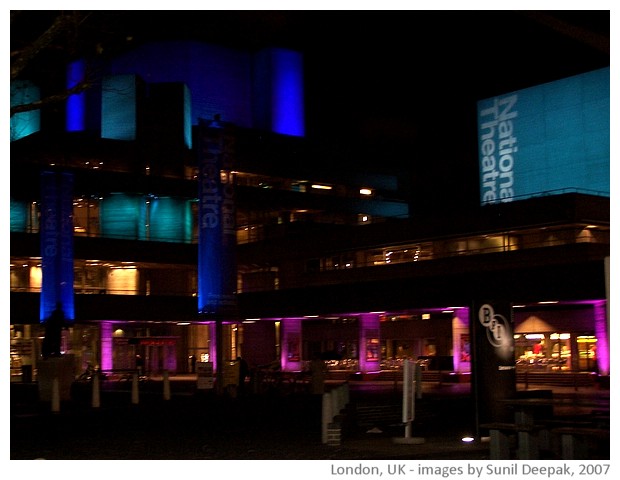 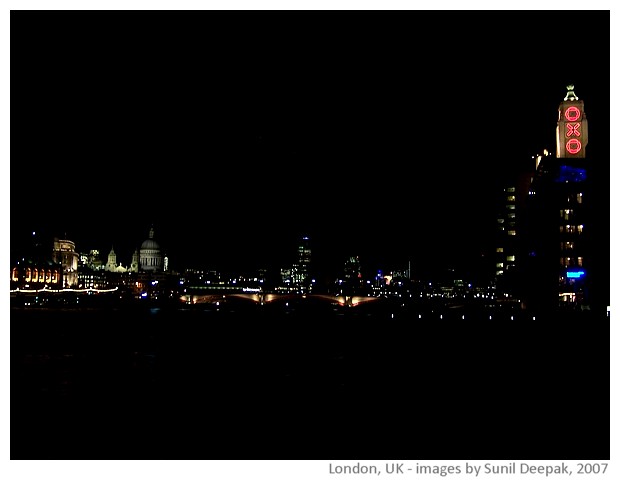 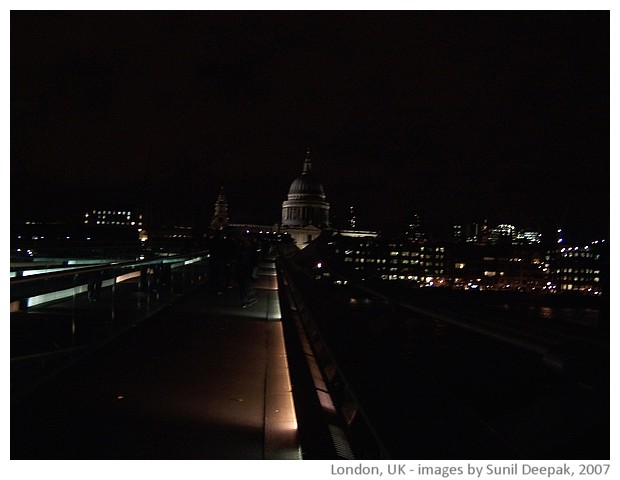