The reformist poet-saints of Karnataka 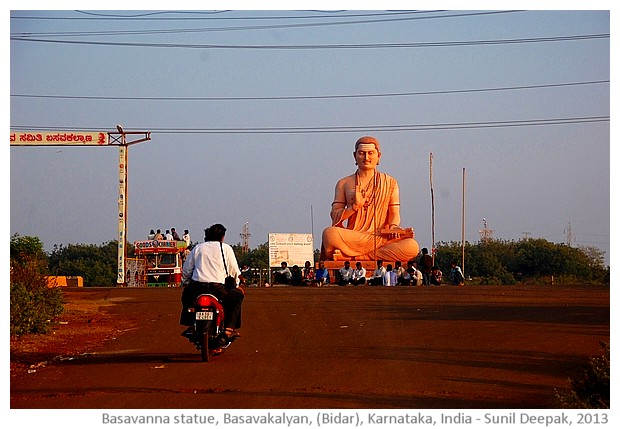 I was familiar with the works of poet-saints like Kabir, Surdas and Meera, but I had little knowledge about Basavanna. Recently I spent a couple of weeks in Bidar district in the north of Karnataka for a research project. It was an opportunity to visit some of the places linked with Basavanna. This photo-essay is about this visit.

Basavanna statues in the villages

For our research we were travelling in a small town, when I noticed the statue of a man sitting on a horse. I had seen similar statues in many other villages. The statue had a man with wearing a crown and his right hand was raised up in benediction. 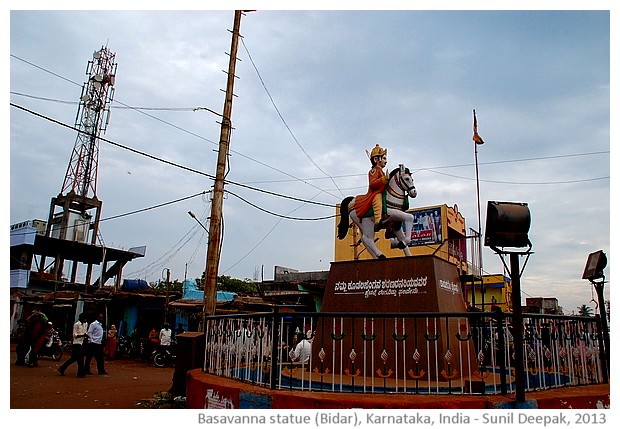 "Whose statue is that?" I had asked.

That was Basaveshwara, Lord Basava. Others called him Basavanna, brother Basava.

"Why do people in villages put up his statue?" I wanted to know.

"He was a poet, he wrote vachchanas or prayers. He was also a social reformer, predicating the abolition of castes from Hinduism", someone had explained.

Later on, when I had searched for information on the internet, I had discovered that Basvanna was from 12th century, thus, had preceded Surdas, Kabir and Rahim by about 400 years. While poet saints of north India, including others like Gyaneshwar and Meera, are well known to common public, they are not objects of public worship like Basavanna. I have never seen statues of Kabir or Surdas in the villages in northern India, while Basavanna seemed to be more popular among the people in north Karnataka.

Basavanna was a minister in the south Kalachuri kingdom in the ancient city of Kalyani. Apart from writing vachchannas, he had also promoted radical social changes through the setting up of Anubhava Mantapa, a democratic community decision-making body that had representatives of different groups including women and persons from different castes. He was part of a social reforming tradition, and was succeeded by other vachchanna writers such as Akka Mahadevi. Their followers are called Lingayats.

Basavkalyan - The ancient city of Kalyani

The ancient city of Kalyani, the kingdom of the south Kalachuri kingdom in 11-12th century, is now known as Basavkalyan, and is also the central town of the Basavkalyan sub-district (taluk) in Bidar district.

Basavkalyan has a temple at the site of the ancient Anubhava Mantapa set up by Basavanna. The central part of the temple is shaped like a giant linga, though inside the Mantapa there are no statues or shrines of Shiva. Instead, the Mantapa is adorned with the pictures of the different social reformers of the Basavanna tradition, while the central part presents paintings showing episodes from life of Basavanna. 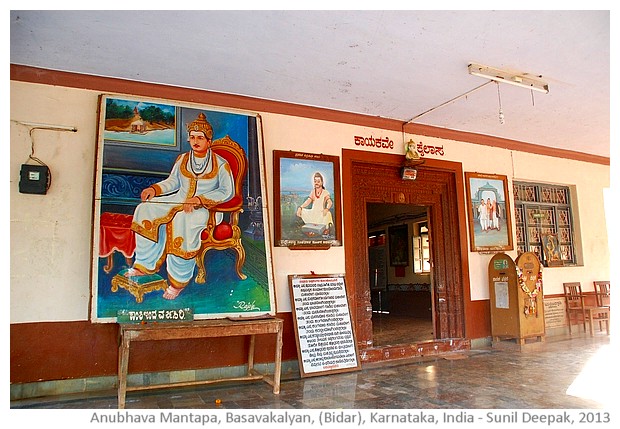 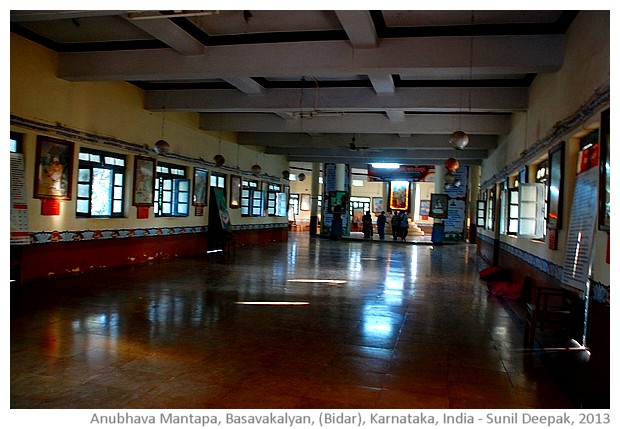 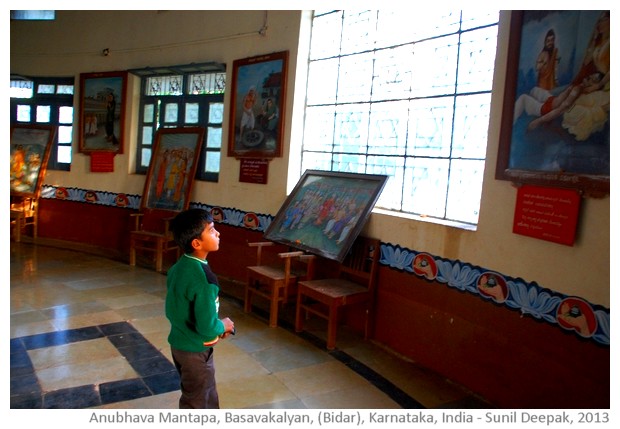 Close to the Anubhava Mantapa is a lake and an ancient Shiva temple. From the lake, on the horizon you can see a giant statue of Basavanna. 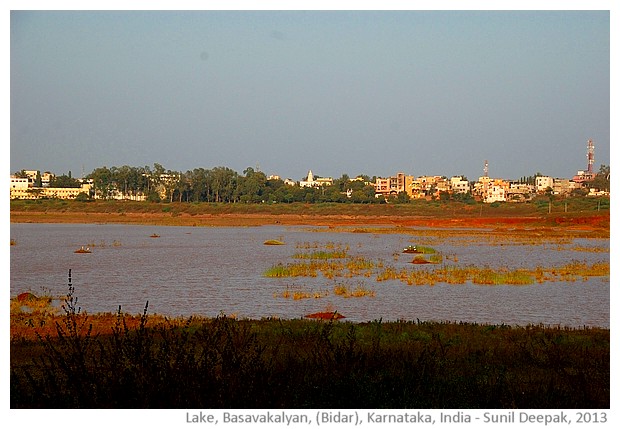 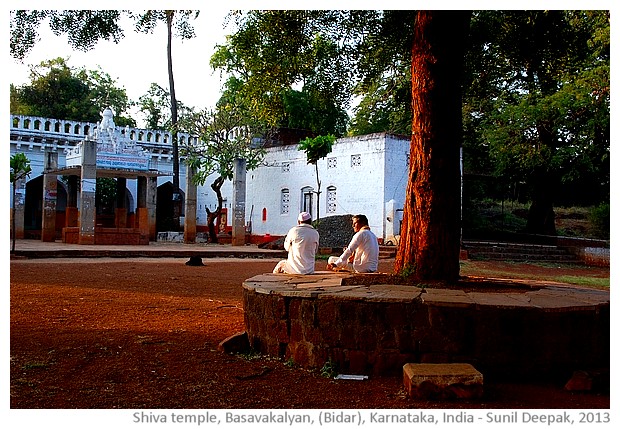 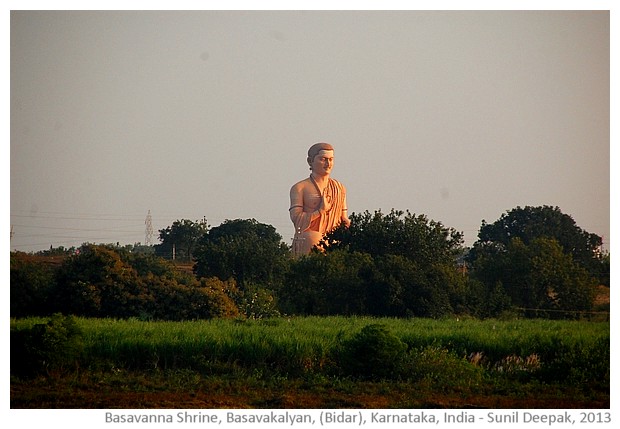 On the other side of the main road that connects Basvaklayan with the district headquarters in Bidar, a new shrine to Basvanna has come up recently that has his 108 feet high statue at the top of a small hill, visible from far away. 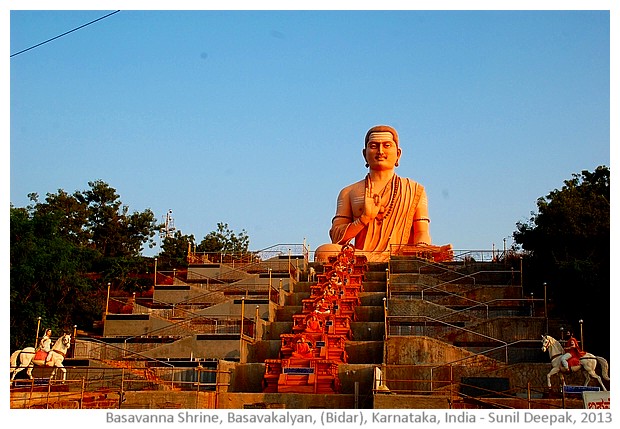 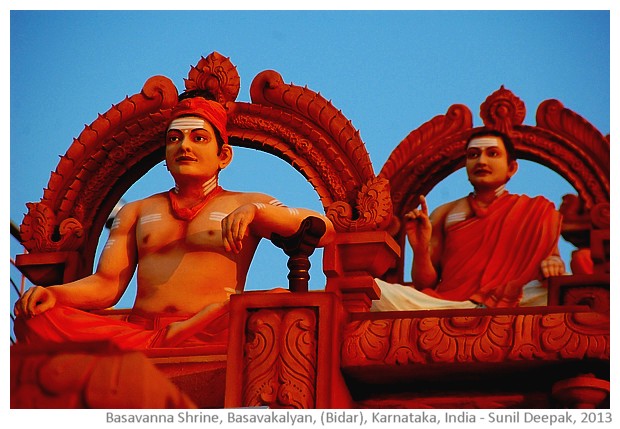 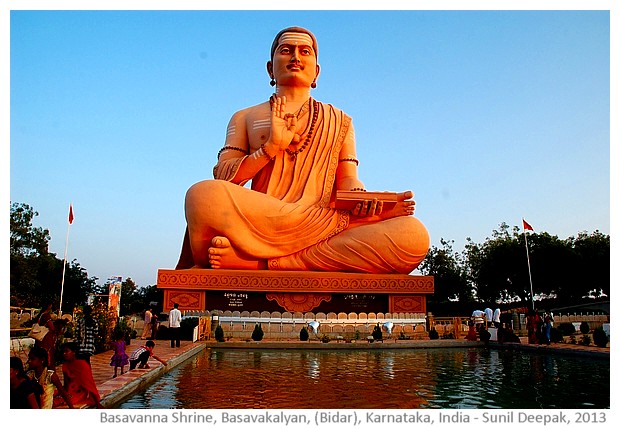 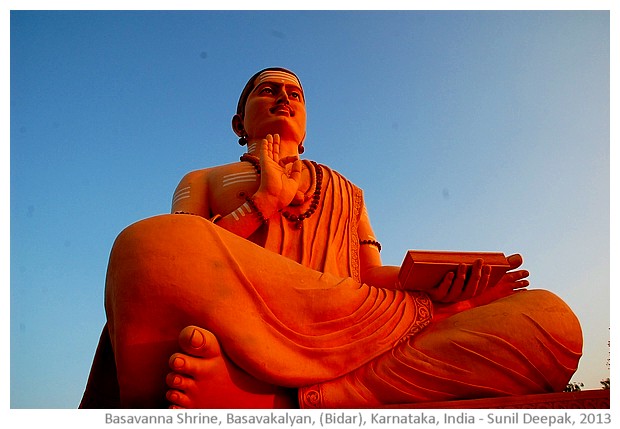 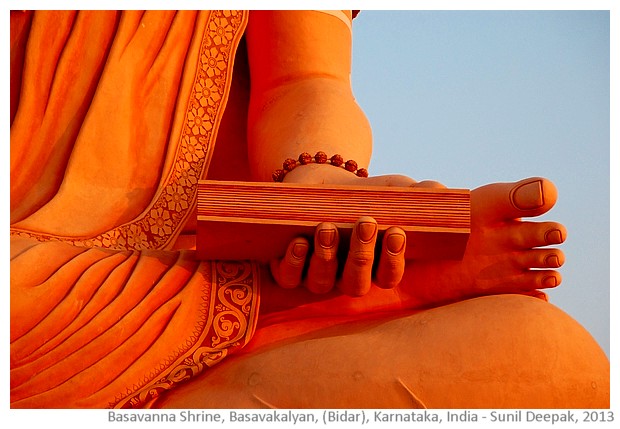 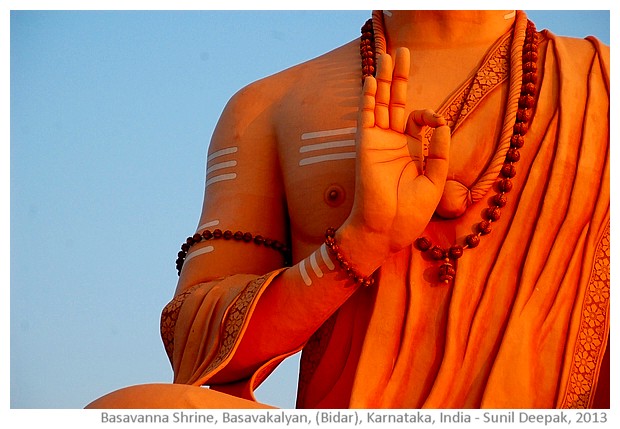 The work on this shrine is still on-going. Underneath the statue, a cave has been dug in the hill which has statues of different social reformers of Basvanna tradition. 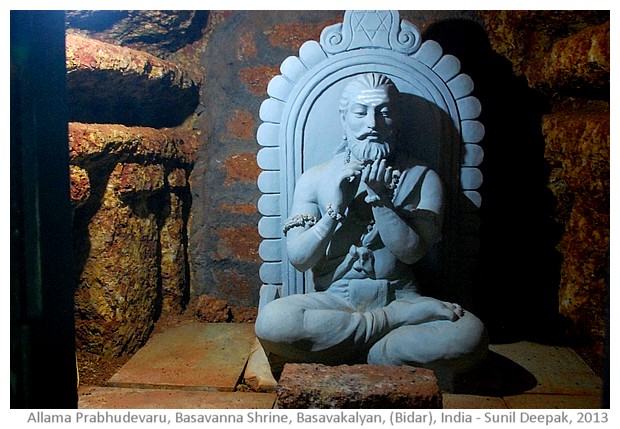 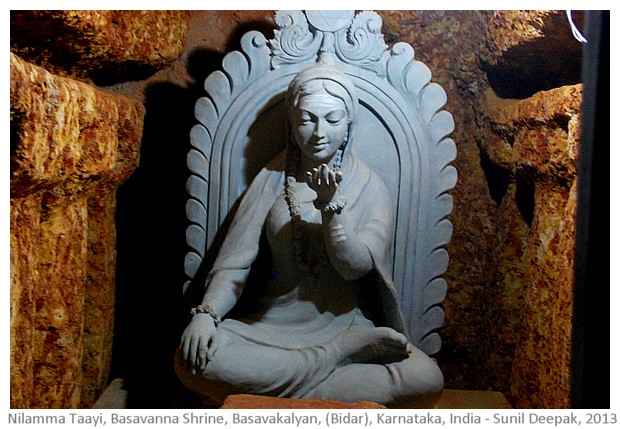 Unfortunately, most statues of the new Basvanna shrine seem to be made with plaster of Paris, and some are already showing cracks, loss of colour and some damage. This means that this shrine will require lot of regular maintenance. 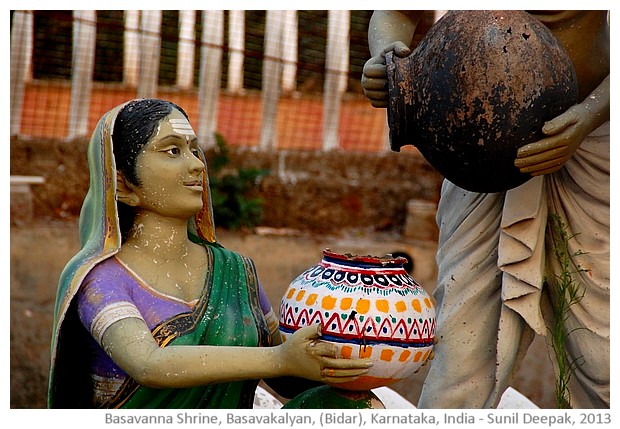 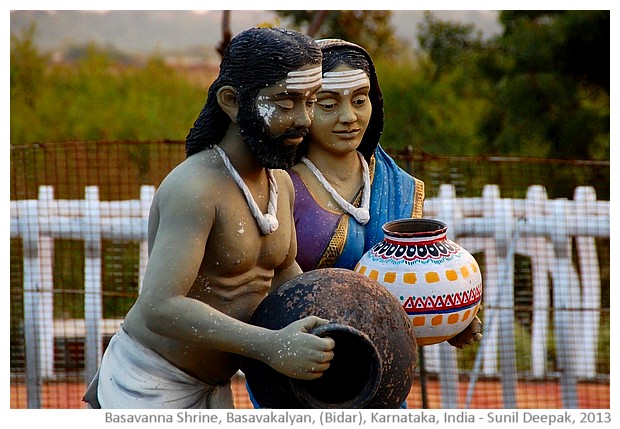 Akka Mahadevi (Sister Mahadevi) was one of the women social reformers in the Basvanna tradition in the 12th century. She had given up clothes and went around nude.

In 2000, film director Madhushree Dutta had made "Scribbles on Akka", where Seema Biswas had played the role of Akka Mahadevi.

The iconography of Akka Mahadevi is challenging for the traditionalists because of her nude female body. Thus, in the paintings, in the front views she is shown with long hair covering her breasts and lower part of her body. Similarly her back views hide her body with her long hair. 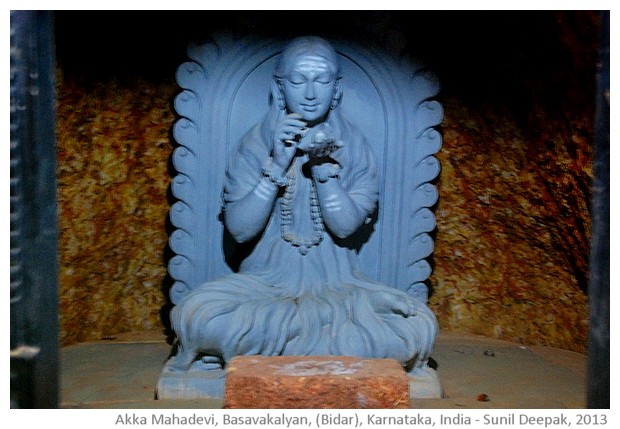 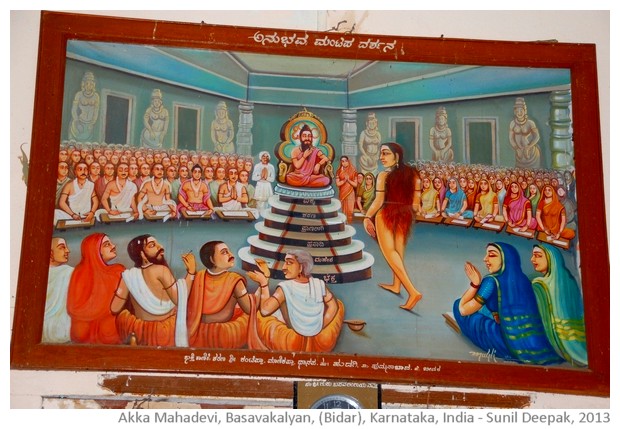 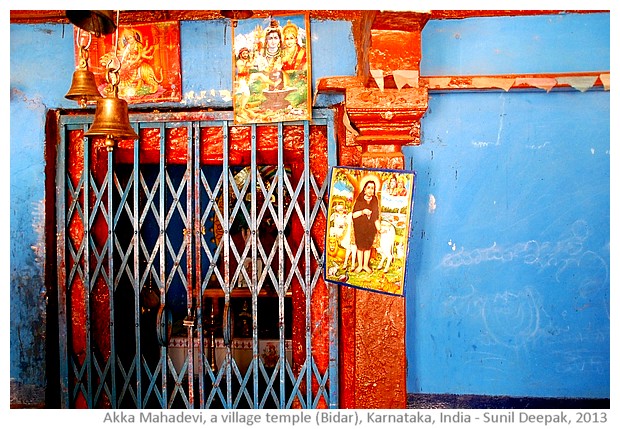 In spite of these challenges, her figures continue to adorn the village temples and continue to be an example of emancipation to women. Her poetry (vachchannas) are also challenging to traditionalists because she raises questions about her body and her soul.

In my opinion, the figures of persons like Akka Mahadevi and Basvanna are one of the best examples of the robust openness of Hinduism that questioned the sacred texts and presented alternate views. That these figures continue to be popular with huge number of followers is an important sign of continuing living traditions of Hinduism against those who wish to present a narrower and more monolithic view of the religion. 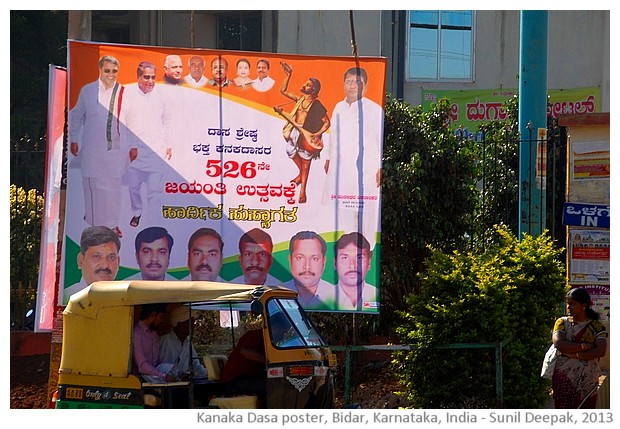 In his poetry Kanaka Dasa talked of class differences and inequalities between the rich and the poor. He also talked of getting above the rituals for a true meaning of god.

I asked my companions about those posters and they explained that these were for celebrating the 526 anniversary of Kanaka Dasa and all the political parties want to be associated with his figure. I am not sure if today in north India any poet-saint enjoys that kind of common popular support, except may be for Sant Ravi Das, whose annual processions used to be an important social event in north India, especially for the dalit groups.

In the traditions of Gautama Buddha and Mahavira, Basvanna and his group of poet-saints from 12th century Karnataka were social reformers. I was surprised by the continuing relevance and popularity of these figures in the contemporary rural Karnataka.

Few centuries later, in 15th and 16th centuries, different parts of India had many other poet saints - Meera Bai, Gyaneshwar, Surdas, Kabeer, Raheem, Chaitanya Mahaprabhu, Ravi Das and Tulsi Das. Today, the poetry and the works of these later poet-saints from north and central India, continue to be alive and known, though none of them has received the iconic status reserved for Basvanna in northern Karnataka. In other parts of India, I have never come across statues of the other poet saints in the villages, like the Basvanna statues in north Karnataka villages.

I was also struck by the dominant statues of Ambedkar in many towns of north Karnataka. I don't know if this is linked in some way to the caste-defying traditions of Basvanna. 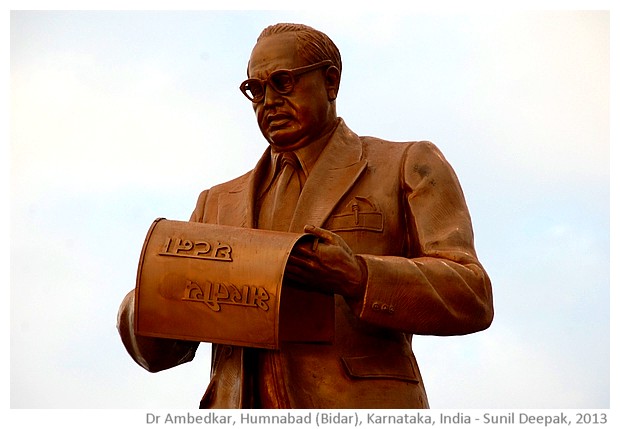 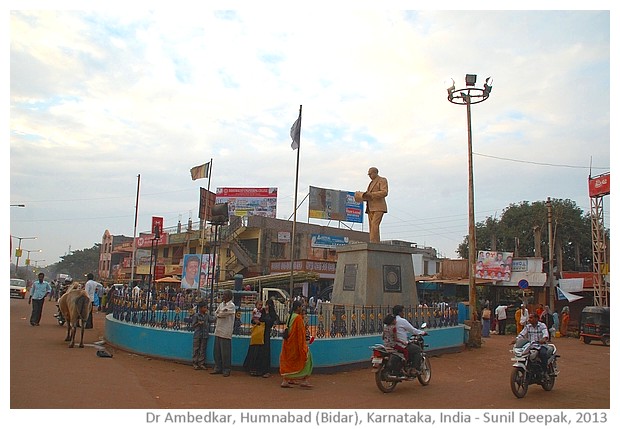 Though Ambedkar was not a poet-saint but for dalit and marginalised population groups of India, his messages of emancipation and dignity have achieved an iconic status and perhaps he can be considered a rightful heir to the Basvanna tradition of social reforms.