Loving the child you didn't expect

When we dream of love and a family, we dream of children like ourselves - bright and happy, who will conquer the world and who will bring joy to our lives. What happens when the child you had dreamed about, comes out very different from your expectations?

This is the premise of Andrew Solomon's wonderful book "Far from the tree: Parents, children and the search for identity" that touches with great empathy on the journeys of a group of "different" children and their parents to reach a surprising conclusion - difficult and unexpected journeys have their own joys. 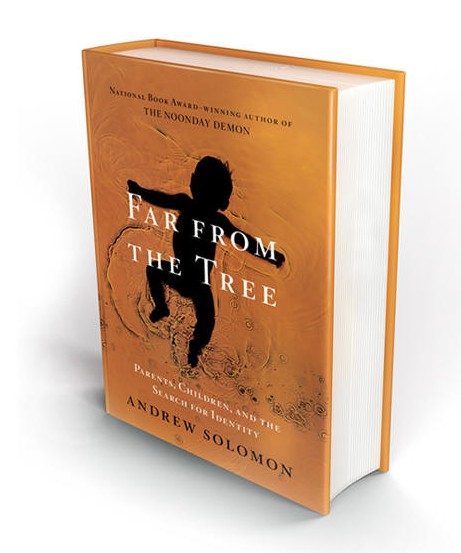 Diversity is an indivisible part of our lives - each of us is unique, even the similar-looking twins. Yet that diversity is within some undefined limits - the seed of each plant, would come up a unique and a different tree, but it would be still like its parent plant - the seed will not fall too "far from the tree." But what happens when the seed does fall too far and the extent of diversity is too big to be ignored?

With about 650 pages of stories exploring this theme of parents and their unexpectedly diverse children (and an equal number of pages with notes and references), Solomon's book did seem a daunting tome when I began reading it. However, soon I was lost in it, often thinking of events and people from my own life and my extended family, in a new way. The book tells mainly American stories, with only a few persons from Britain or Rwanda. Yet, I could feel and share the emotional journeys of the people described in it, because even though there are social and cultural differences from the persons in other countries, the essential human emotions are still the same.

Themes of the book

The book starts and ends with two personal chapters - "Son" and "Father" - these explore the relationships between "diverse" children and their parents with a special reference to Solomon's own life, as a gay person who suffered through depression and his decision to have children while he was writing this book. These two chapters are the emotional anchoring of the book.

In between those two chapters, there are six chapters dealing with disabilities - deaf, dwarfs, down syndrome, autism, schizophrenia and other disabilities. All these chapters are about conditions that the society and the parents usually look at as "negatives". The next, chapter VIII, is about a diversity that most of us would imagine as "positive" - the child prodigies.

Then there are three more areas of "negativity" - children born of rape of their mothers, children who end up in the world of crime and children who feel imprisoned in wrong bodies - the transgender persons.

On each theme, the book tells stories - each story is told from different point of views of the persons involved in it - persons themselves, their parents, their siblings, their friends, etc. In between the stories are scattered some reflections and information about some of the key issues regarding the different dilemmas that those people face.

For example in the chapter on dwarfs, there are stories of "little people" and in between the stories, you can understand about organisations of little people, the different names they prefer to be called, their dilemmas about having children like themselves or "normal" children, how looking at them individually we tend to focus on their shortness while when they are together as a group, we can see them as individuals, the different kinds of dwarfing conditions, the long suffering for getting "elongation operations", etc.

This way of telling stories is like building a story-pyramid, where each stone shows a different facet. In the end you realize that each diversity is made of countless diversities, each is similar to others and yet unique, and that you can't take for granted anything because as human beings, we continue to surprise ourselves and others, not just with prejudice and ignorance, but also with generosity and dedication. 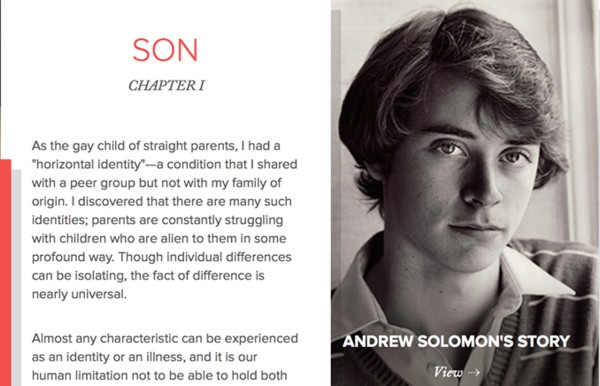 It was a long time since I had read a book that touched me so deeply and I would like to thank Solomon for that. Diversity surrounded me since childhood and probably that is true of everyone else as well.

Diversity raises barriers around you, I had experienced it as an immigrant in Italy - you are different from others, and in many different and subtle ways, people react differently to you. I had had long discussions about the nature of those barriers with a friend who uses a wheel chair and negotiates different kinds of barriers all the time. As a child, I had grown up with two of my aunts being "diverse" - one because she was born with a few fingers missing in a hand, and another who had small pox as a baby and carried the signs of that infection on her face. Growing up, I had seen how we all behaved differently with the deaf brother of a close friend. A few years later, first one of my school friends and then another aunt, both had had children with Down's syndrome.

I chose to work in the area of disability and community-based rehabilitation. Often I have also interviewed persons with disabilities and their families. Many of the issues about which Solomon has written in the book, were not new to me. Yet, I found the book illuminating because it went much deeper and had a more profound connection with people it talks about. I must have read countless books, articles and journals on the issue of disability, but still Solomon's book gave me new understandings.

So if you work with development issues or in a community programme, even if not specifically in a disability related programme, read this book. If you are a health professional, don't miss it. Even as human beings, I think that everyone should read it. I hope that it will be translated into other languages.

Among all the different kinds of diversities Solomon writes about, for me the most difficult part was reading about the severely autistic persons. Not to be acknowledged, not to receive even a tiny smile or a flicker of recognition in the eyes - I think that I will find that the toughest thing to bear. However, there are different stories in the book that show that when we become familiar with a person and his/her condition, we can deal with it. It is the unknown, the "other" that makes us afraid.

Solomon writes very well, his empathy makes you understand people's feelings, fears and pains, but it is only in the chapter on Prodigy, that I could appreciate the poetic beauty of his words.

For example in the story of Zhenya (Evgeny Kissin) Solomon gives a vivid understanding about his early life in a state-controlled country with his words, "The Kissins lived the life of the Soviet Jewish intelligentsia: physically uncomfortable, constantly frustrating, the pleasures of the mind partially filling in for ordinary discomforts of the flesh and ideology’s constant intrusions on the spirit."

Or, this description of Zhenya that brings him alive so beautifully, "Zhenya is too tall and too thin, with a strangely large head, enormous brown eyes, pale skin, and a mop of crazy brown hair in which you could mislay something. The overall effect is slightly gangly, and his bearing combines the tense and the beatific. Watching Zhenya sit down at the piano is like seeing a lamp plugged in: decorative though it may have seemed, only then does its real use become apparent. You feel less that he is pouring energy into the instrument than that he is receiving energy from it. “I don’t know if I would be able to live if I suddenly became unable to play,” he said. Zhenya plays as though it were a moral act that could redeem the world."

Limits of the book

In terms of the stories that Solomon presents, I think that there is an inherent bias - people who did not want to care for their "problematic" children, for whatever reason, are under-represented in this book. I think that at one level our societies ignore or actively discriminate against "different" families, but at another level, people who feel that they can't take care of their children and give them up to institutions or to foster care, are also seen negatively. We expect people to "look after whatever God has given them, even if it is a difficult task!" And, thus I think that for such people, it is very hard to overcome feelings of being judged and probably feelings of guilt, so they do not share their stories in this book.

In the Indian context (and in other developing countries), often there are no institutions or foster care where you can "give up" such children. I am sure that communities have ways of "dealing" with this issue. Thus in my work, often I did meet persons who have chosen to take care of their "different" children, but there was no way for me to meet those had made other choices. I am saying this without any intention of judging others - for poor families that struggle to survive, there are not many choices and none may be easy.

The book explains that internet has given new opportunities for "diverse" people to find others like them and to create "communities". I wonder if through internet there are groups of parents who had chosen to give away their disabled children and can find solace and understanding with each other. Their stories remain largely unknown.

I also felt not completely convinced about the chapter on the prodigies in this book. I could understand the sense of alienation of these persons and their families and the sense of their diversity, and yet, this chapter is very different from all other chapters in the book. Solomon focuses on musical prodigies and the chapter is almost halfway in the book - it comes as a relief because, for once he is not talking just about pains and difficulties, but also about common joy, success and pleasure.

I think that if there is only one book from 2013 that you can read, then it should be Andrew Solomon's "Far from the tree". Not just because it talks of people who face enormous challenges and find joy in those challenges. But because it makes you appreciate and understand the emotional anchors of your life and how important are the love and affection of people in our lives.

You can read more about this book and get a glimpse of many of its stories on the book's webpage. The two images used for this post are from this same webpage.