The mountain of God - Ramallah

Palestine is divided in two parts - "West Bank" bordering Jordan and the Dead sea and "Gaza Strip" facing the Mediterranean sea. In the West Bank, Ramallah is probably the most important Palestinian city. Recently I had an opportunity to spend a couple of days in Ramallah. This is a photo-essay about Ramallah, literally the "Mountain of God". 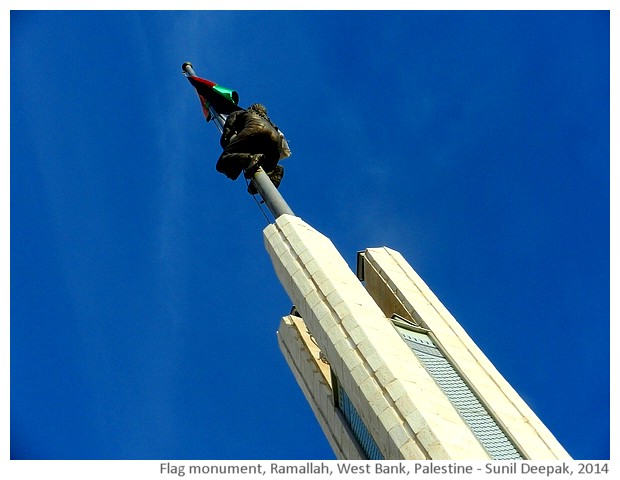 Before going to Ramallah, I had only heard about the city when they talked on the TV about some event in the Israeli-Palestinian conflict. Thus, the images of Ramallah in my mind were of boys waving flags or people shouting slogans behind the funerals of persons killed by Israeli shootings.

Therefore, I was not prepared to see Ramallah as a beautiful city with beautiful houses as you can see in the picture below with an overview of the city. 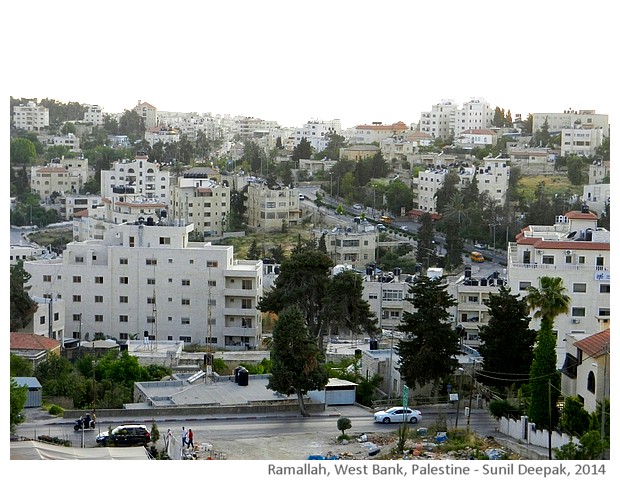 I did not visit the old city. However, even in the new part of Ramallah, the central part is relatively old, and is like any other Arab city with lively streets, people buying and selling things, persons selling and eating snacks and people sitting with friends and gossiping. 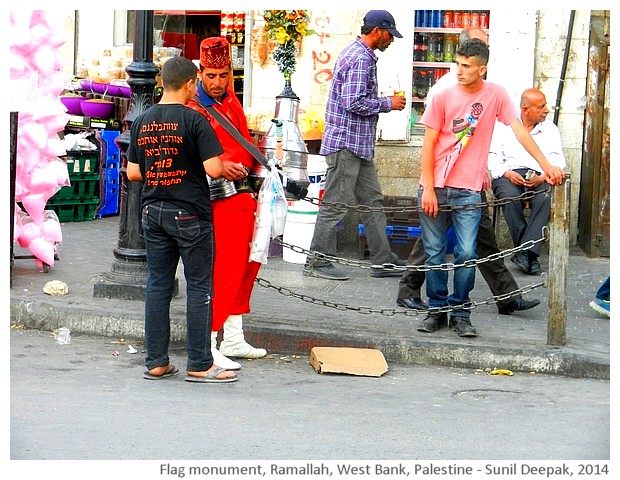 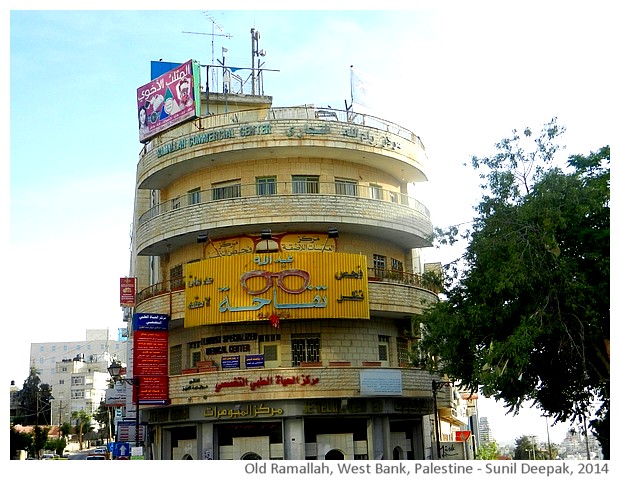 Over the past few years, Ramallah has expanded for many kilometres beyond the city centre with new buildings, new residential areas and new commercial spaces gleaming with steel and glass like the Ramallah towers and the Ramallah Trade Centre in the images below. 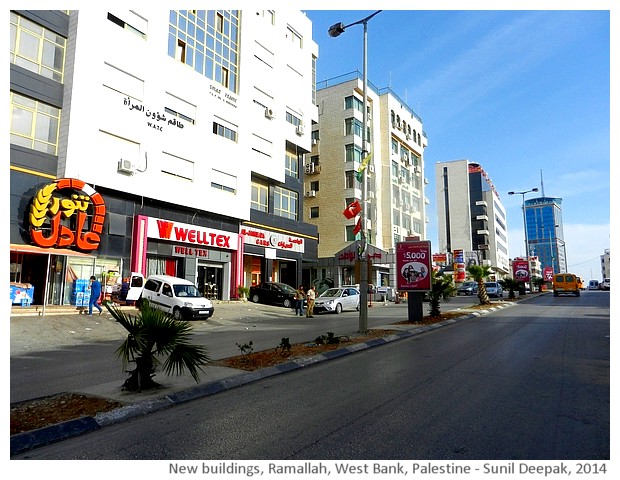 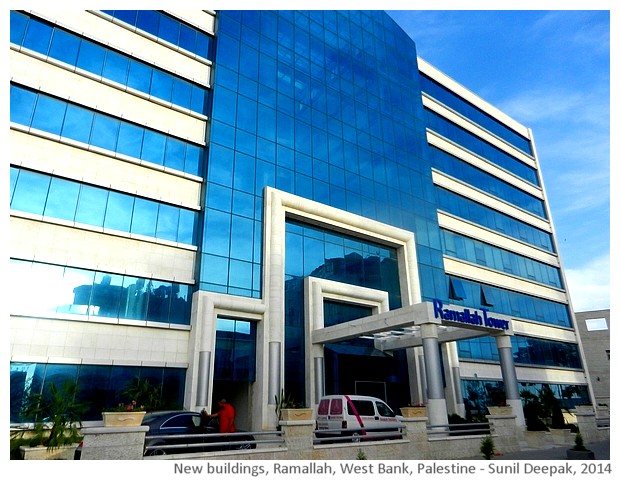 In the city centre, there are two main squares - Manara square and the clock square. Manara (lion) square has a central round-about with statues of 4 lions and a central pillar. 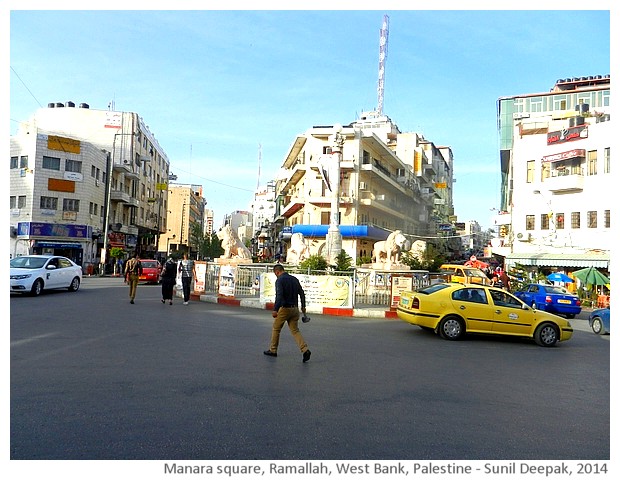 The clock square was called so because it had a clock in the centre. This was replaced some time ago by a new monument which has a man climbing towards the Palestinian flag and symbolizes the Palestinian struggle for nationhood. This square is now called Yasser Arafat square. 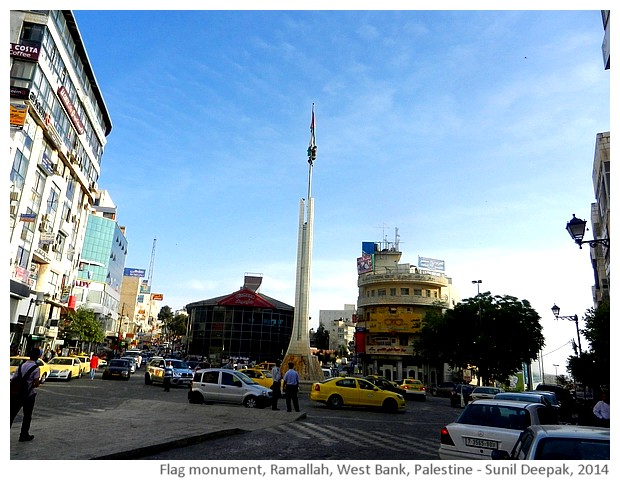 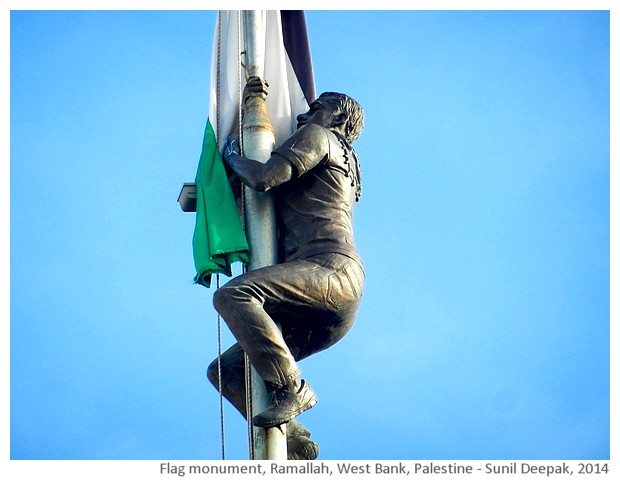 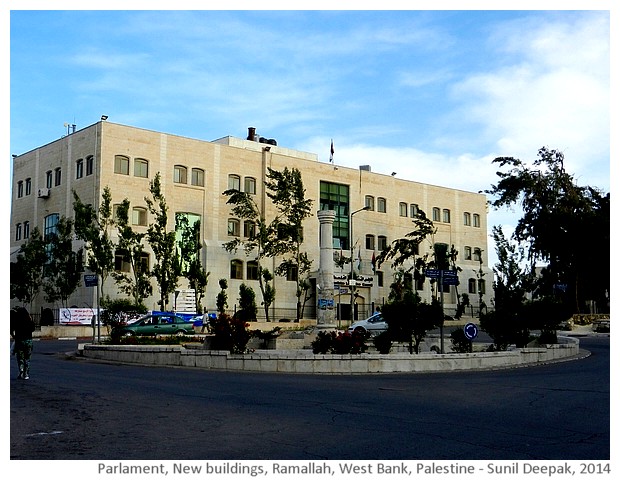 The Palestinian love for colours is seen in the wall paintings. 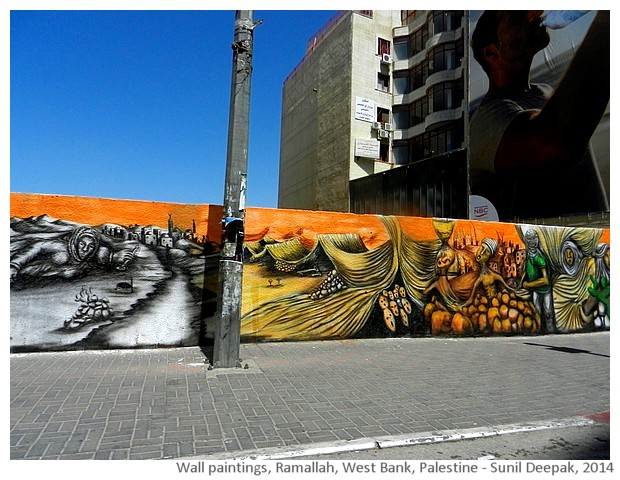 However, the modern buildings can also present wonderful views through reflections in the glass walls. 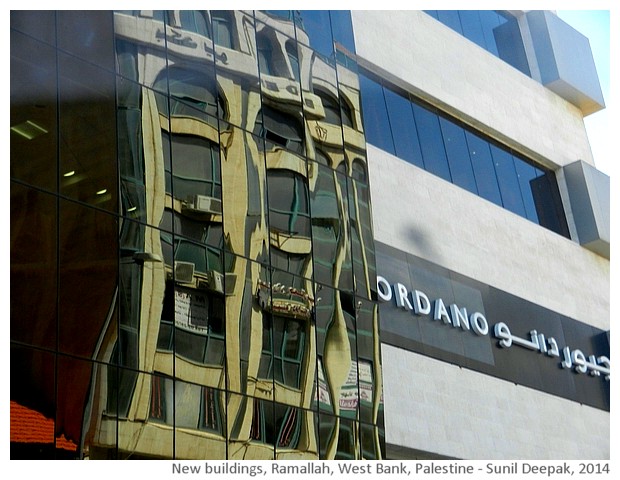 I saw some political graffiti on the high walls built by Israel near the Qalandiya check-point that controls the passage between Jerusalem and Ramallah. 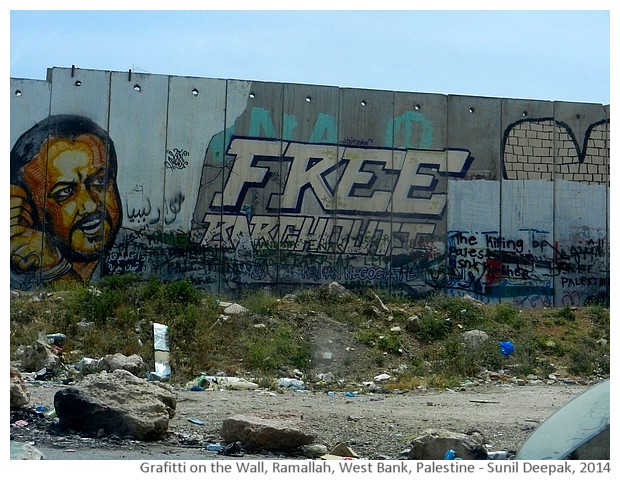 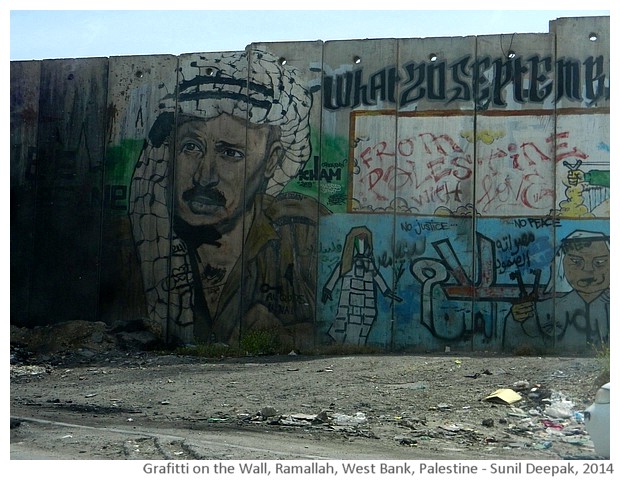 Yasser Arafat continues to be remembered as the national icon by the Palestinians. The mausoleum with his tomb is situated just behind the presidential palace. 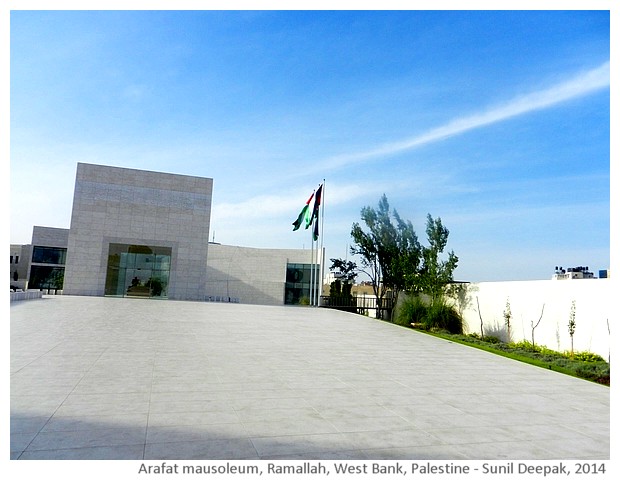 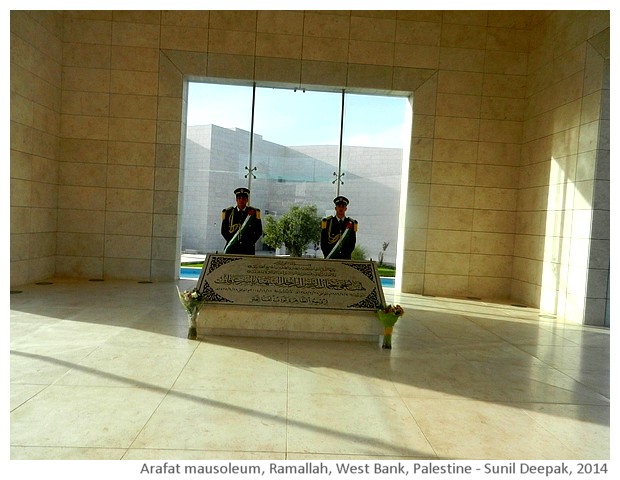 Ramallah is full of roads going up and down the hills. Sometimes, there are stairs connecting roads at different levels. 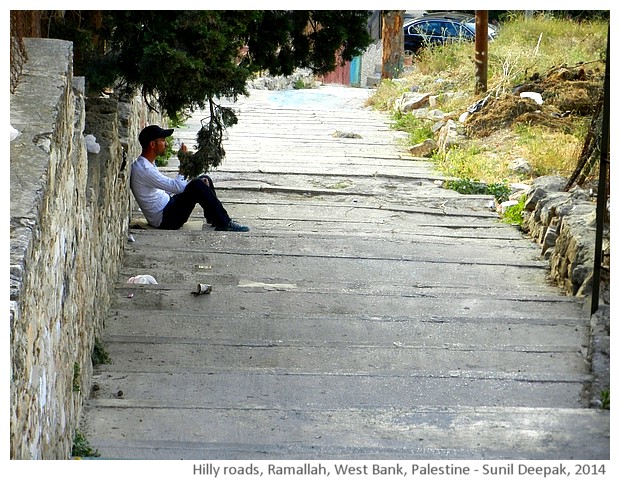 To conclude this photo-essay, here is an image of the mosque at the Arafat mausoleum. 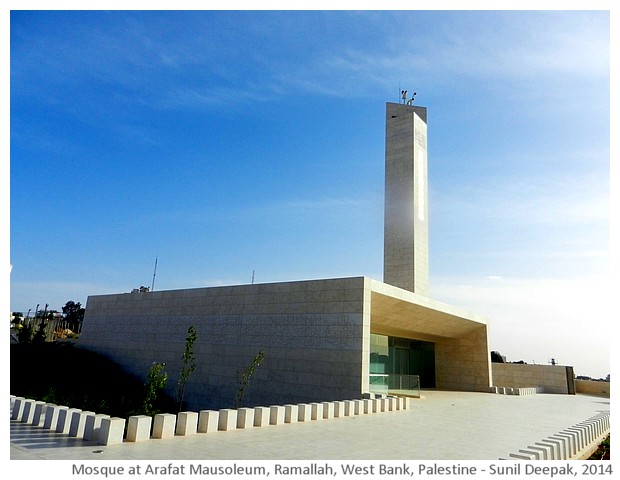 Before going there, I had only seen images of Ramallah with conservative Muslims and angry youth. Due to those images, I was a little afraid of going there. Thus visiting Ramallah was a surprise.

Recently, I had read an article by an Indian journalist called Zahir Janmohamed where he had talked about how journalists can perpetuate the stereotypes about persons and places, and justify it by saying that public wishes to read only that kind of information. While visiting Ramallah, I could understand the point made by Zahir.

Ramallah is a vibrant, living place with real persons who have complex lives. Presenting them exclusively in terms of Israel-Palestinian conflict or in terms of conservative Islam, reduces them to uni-dimensional stereotypes. I hope that this photo-essay gives you another view about life in Ramallah.

One of my most beautiful memory of the stay in Ramallah is about listening to the early morning azaan by the muezzin, who had a wonderful voice. I wish I could have recorded that call, but it was not loud enough for recording. As I lay in the bed, I could feel the waves of that sound surround me and touch my heart!