Assam in the north-east of India has a rich tradition of dance, music and theatre. This photo-essay presents some of the classical and folk traditions of Assam. 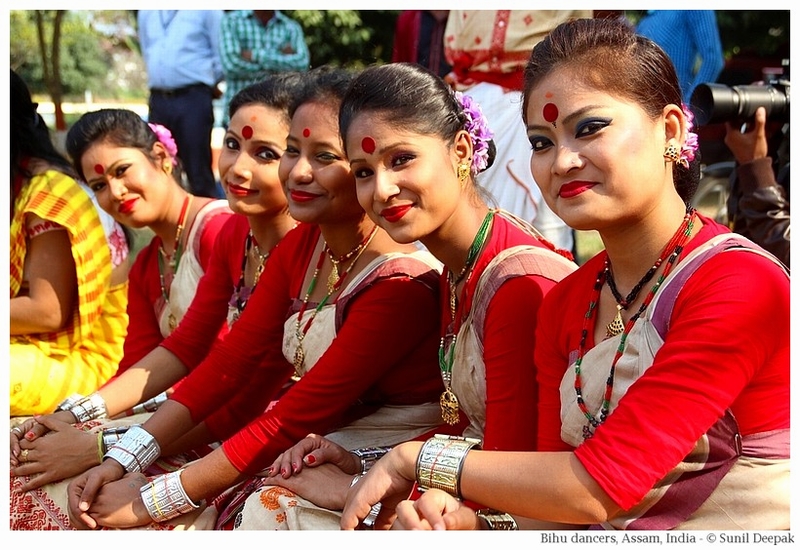 Assamese people are a mixture of different races and ethnicities. Over the centuries, people from central and north India, from the Tibetan plateau, from the neighbouring areas of China, Myanmar and Bangladesh, have all contributed to Assamese people and cultures.

Ahoms, who came from the neighbouring Myanmar in the 12th century and ruled Assam for almost eight hundred years, have been a strong influence. Neighbouring Bengal and Odisha, have also been an important influence.

Assam also has different indigenous groups such as Bodo, Mising, Deori, Rabha, Tiwa, Lalung, Khamti, Sonowal, Karbi, Naga, Dimasa and Singpo. It also has tribes from central India who were brought to Assam by the British during the past hundred and fifty years to work in the tea gardens (tea tribes). 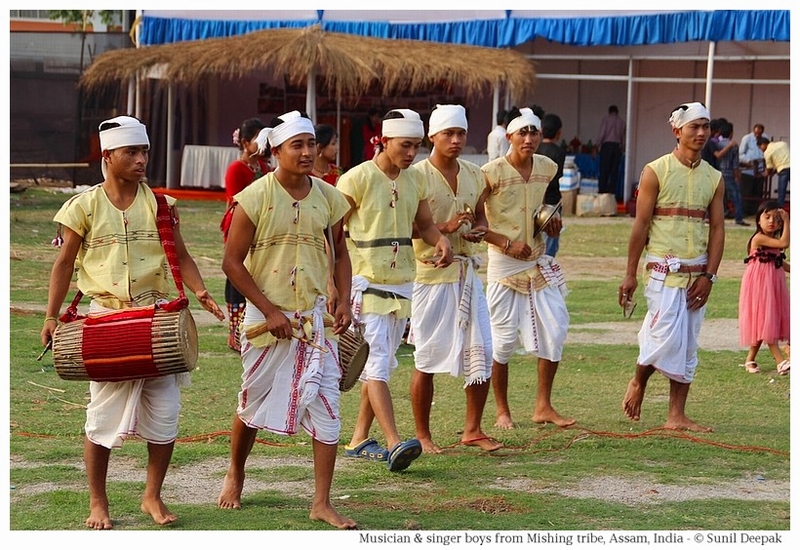 All these different groups of people bring their cultures to Assam and thus contribute to the richness of the Assamese dance, music and theatre traditions.

Folk traditions are based in rural communities and are orally transmitted between the generations. Only over the past decades, written materials about some folk traditions have been developed. 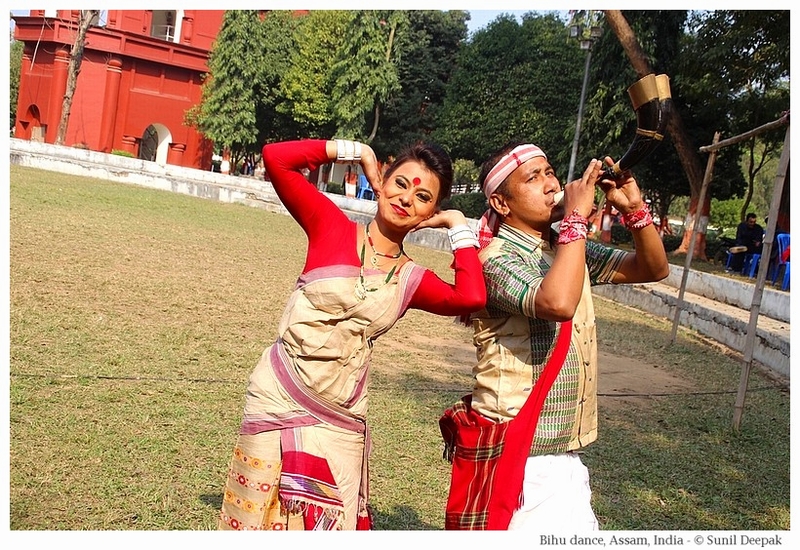 Folk theatre can be on different themes - religious, satires related to daily lives, romantic stories and historical figures. Assam has different folk theatre traditions focusing on religious themes such as Ojapali, Kamrupia Dhulia, Putula Nach, etc. Another area of religious folk theatre is Jatra, which also has many variations in Assam such as Manai Jatra and Bhasan Jatra. Finally, there are dramatic theatre traditions that can be religious or non-religious, such as Paseti and Mothoni.

Classical traditions of Assam are strongly influenced by the Vaishnavaite teachings of Shrimanta Shankar Dev and his disciple Madhabdev in the 16th -17th centuries. Religious centres called Sattra established by the followers of Shankar Dev have developed cultural traditions. These revolve around the texts of Padma Purana and other Hindu scriptures. Classical traditions are governed by codified norms. These include Bhaona theatre, Gayan-Bayan singing traditions and Sattriya dance.

During 20th century, Bhupen Hazarika, a multi-faceted Assamese artist with interests in folk music, dance and theatre, has been a significant influence in Assam, leading to a renaissance of the traditional art forms.

Majuli island in Brahmaputra, not far from Jorhat, has the most important Sattra that carry forward the legacy of Shrimanta Shankar Dev.

The image below presents a scene from Ramayana from a Bhaona performance of a group from Majuli, showing princess Sita. All the female roles in Bhaona are usually played by men. 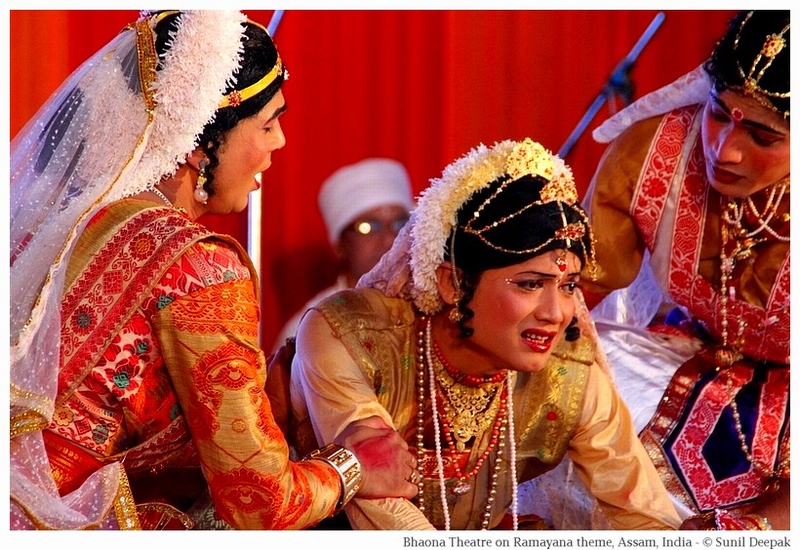 Popular folk theatre also uses masks in performances. The next image has a Krishna Putula for a theatre performance, created by master craftsman Debkanta Mahanta. 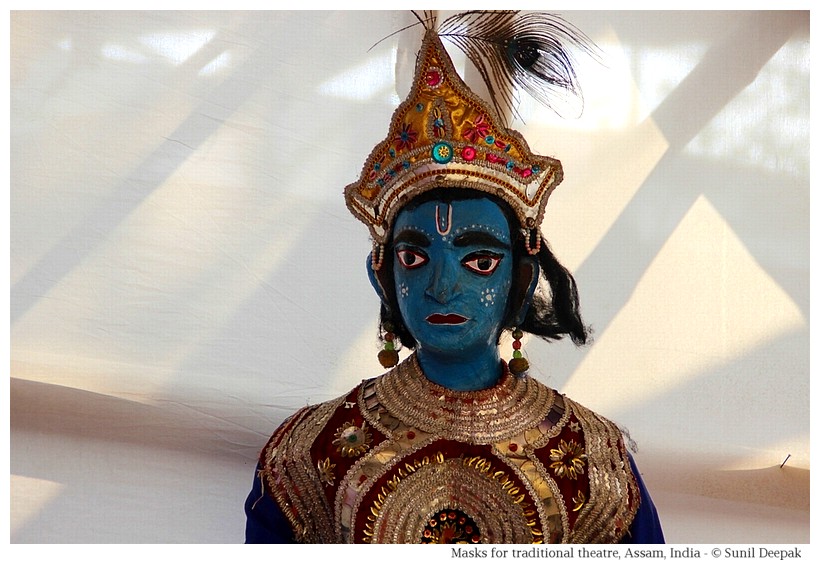 The next image presents Gayan-Bayan, the singing and story-telling tradition from a sattra in Majuli. These are sung by male monks from the Sattra and are accompanied by percussion drums (dhol) and medium size cymbals. During the singing there are also dancing movements using the drums. 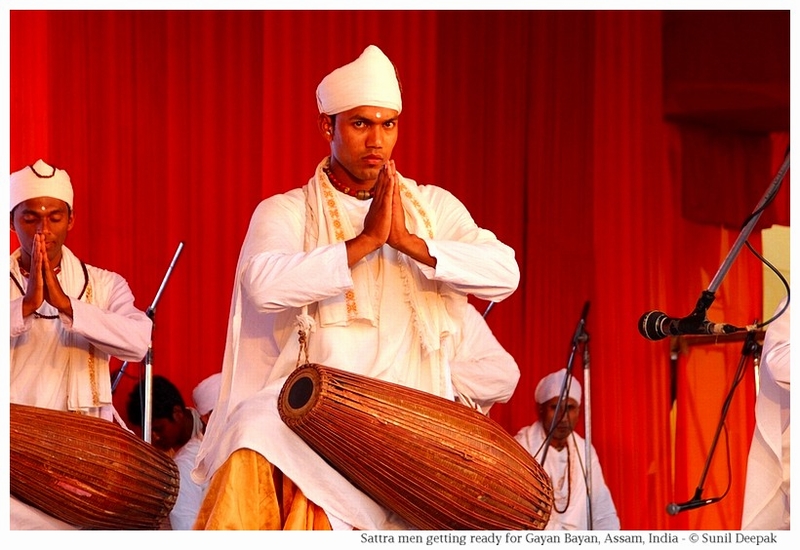 The third image presents a Sattriya dance performance by Ms Shrutimala Medhi of Guwahati. Often the Sattriya dance is used to tell a story about Krishna and are like one-act plays (Ankiya Nat). However, the dance can also be abstract. The movements of hands (mudra) and feet (pada), as well as the different body postures must follow the codified dance norms. 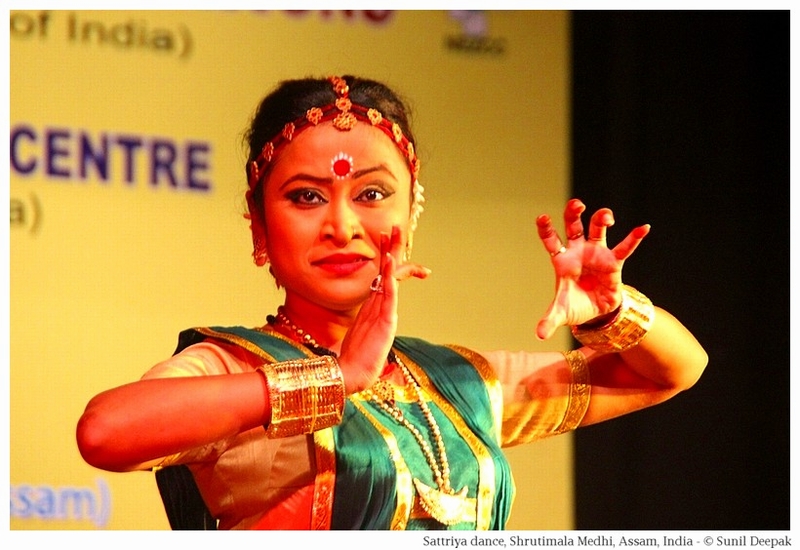 The next image has a group of Cymbal dancers, a kind of Sattriya dance, where the dancers use medium size cymbals during their dance. 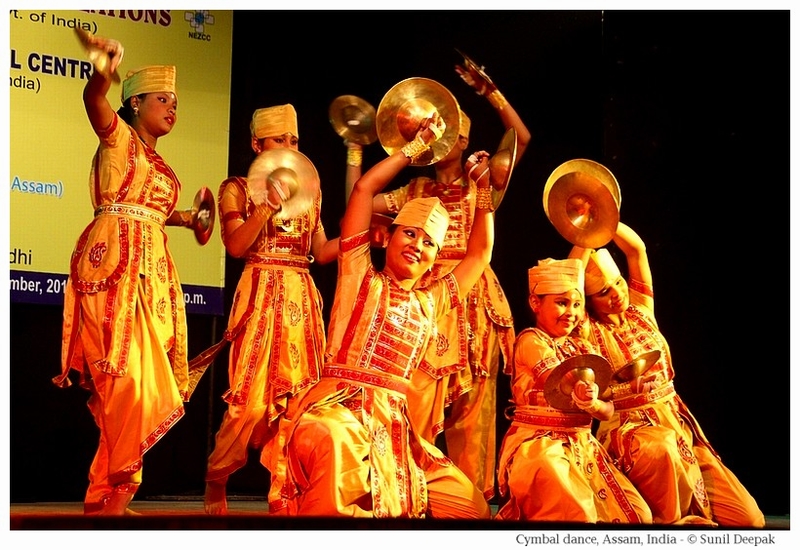 During this dance, men are responsible for singing, music and dance. The music instruments used in the dance include cymbols, dhols (drums) and pepa. The men wear dhoti and gamocha. The women wear mekhla-chador dresses and one of their characteristic dance movement is that of bending slightly forward with hands on their backs, as shown in the next image. 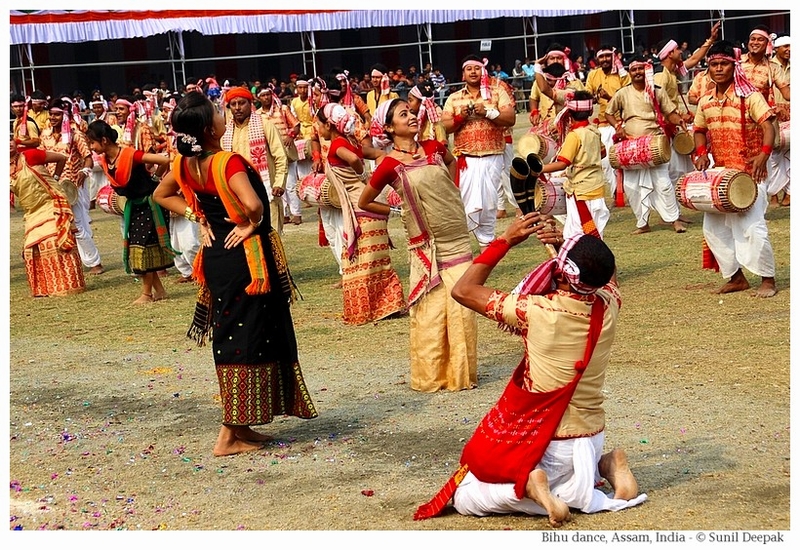 The first image has boys in the traditional dress of Dimasa (children of the river) tribe who are part of Kachari people. Their mythological stories are about Bangla raja (earthquake god) and a divine bird called Arikhidima. 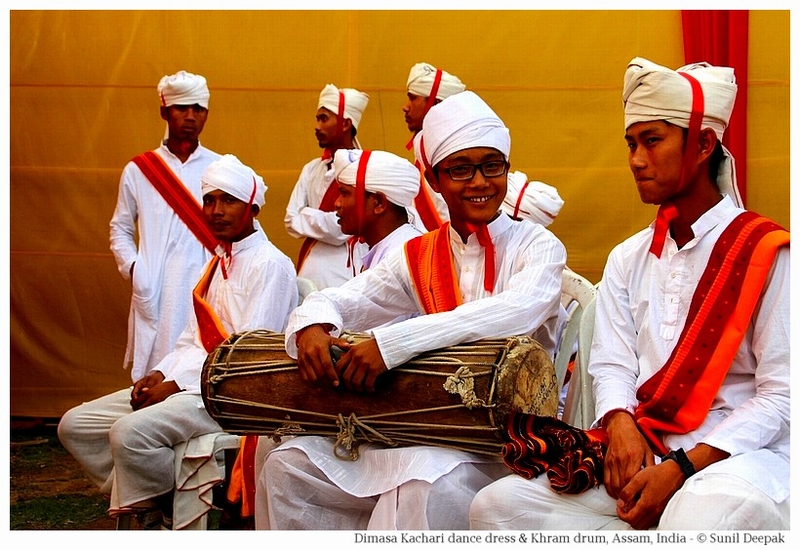 This group was from Dima Hasao (sometimes called Hsiao) district of Assam. Their drum is called Khram.

The next image has dancing young women from the Mising (also called Mishing) tribe. This is one of the bigger tribes of Assam, spread over different districts. This dance is called Lotta Sohman and is accompanied by folk songs called Oi Nitom. 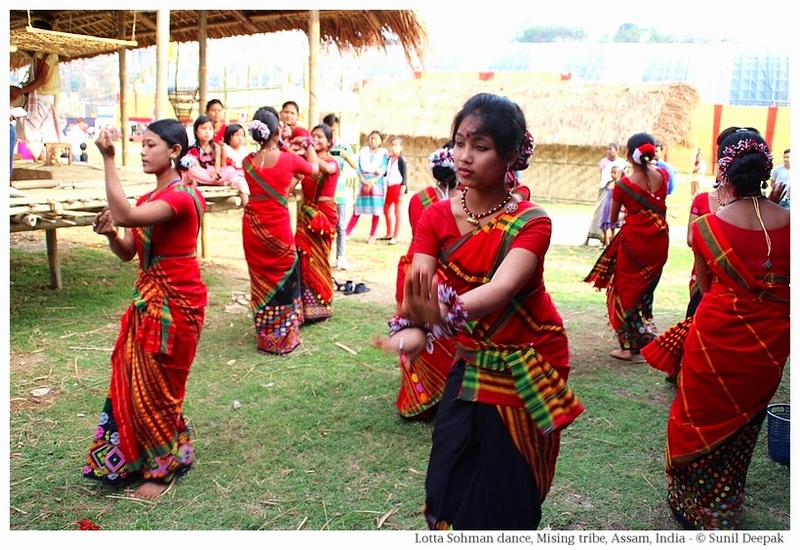 Karbi tribe is one of the larger groups of persons in Assam. This tribe lives in the hills across different districts. The next image has a martial dance called Chong Kedam performed by the men and women of Karbi tribe who carry swords and shields. 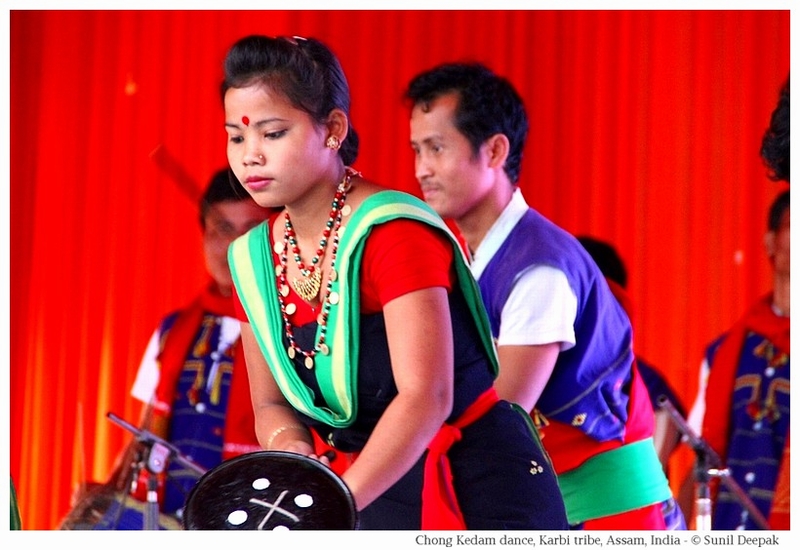 It is said that the Karbi tribe is originally from China and this dance is about their southwards journey when they came to Assam. During the dance, the male dancers show vigorous exercises.

The next image is also about the Karbi tribe and shows the young men in the Nemso Kerung dance. This dance is part of Chomonkan ceremony related to a funeral of elderly persons in the family. 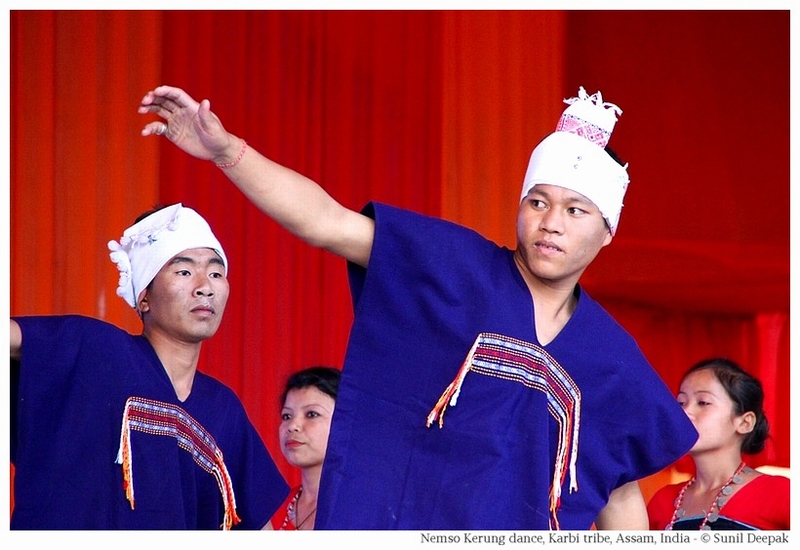 Assam is also home to some Naga tribes. Next image has a group of Naga dancers from the Karbi Anglong district. Naga dresses have a dominance of black and red colours. 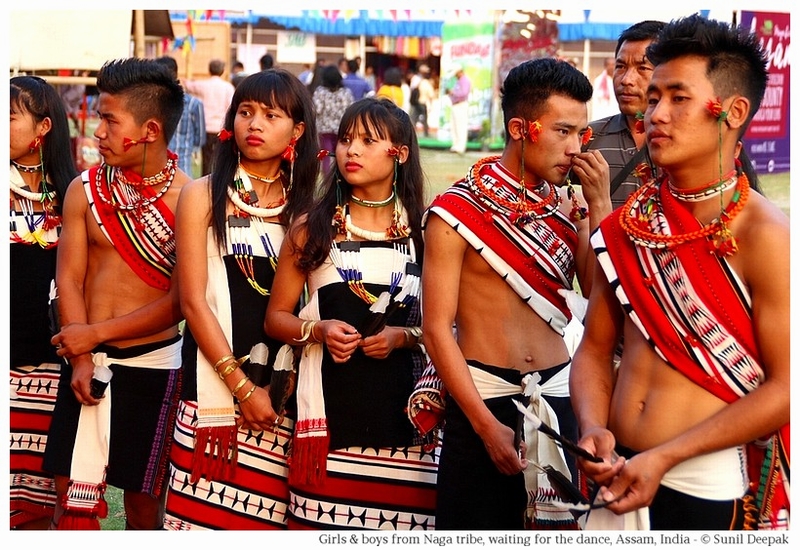 Assam has a significant number of Muslims and traditional Axamia Muslim communities are culturally integrated in mainstream. Zikra is the specific traditional music form linked with the Axamia Muslims, shown in the next image. 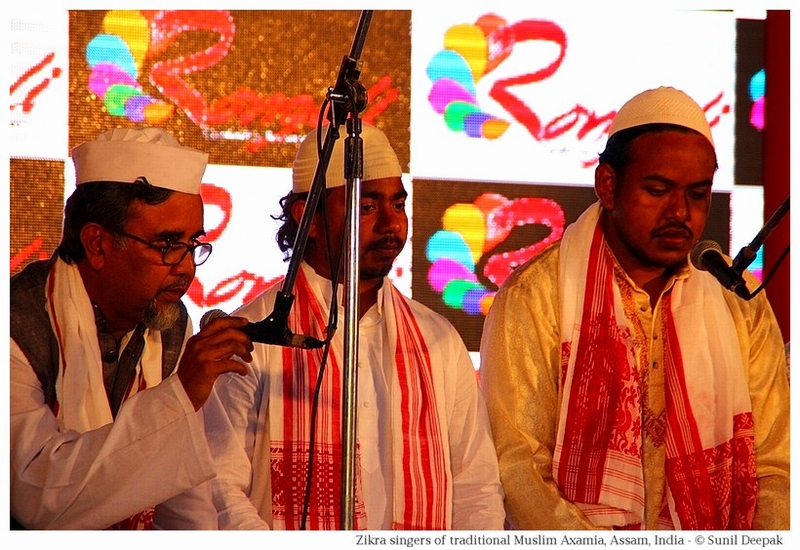 The Next image is about the Popular Theatre of Assam – from the play Sati Bahula directed by Lakhendra Gunnakar Goswami. 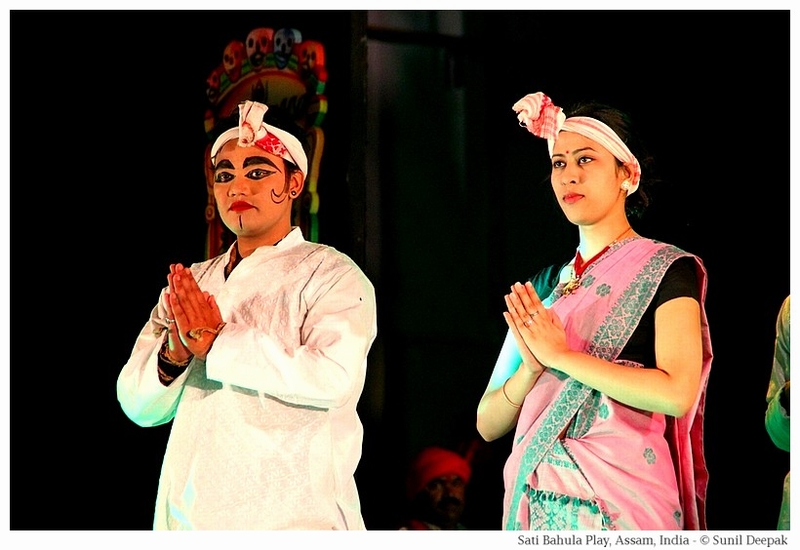 Assam shares the tradition of wandering singing mistrals called Bauls with neighbouring Bengal. Bauls are often travellers who carry their songs of devotion to the rural areas. Though close to Hindu ascetics, they also include persons from the Muslim Sufi tradition. The last image of this post has a woman Baul singer during the Ambubashi festival at Kamakhaya temple in Guwahati. 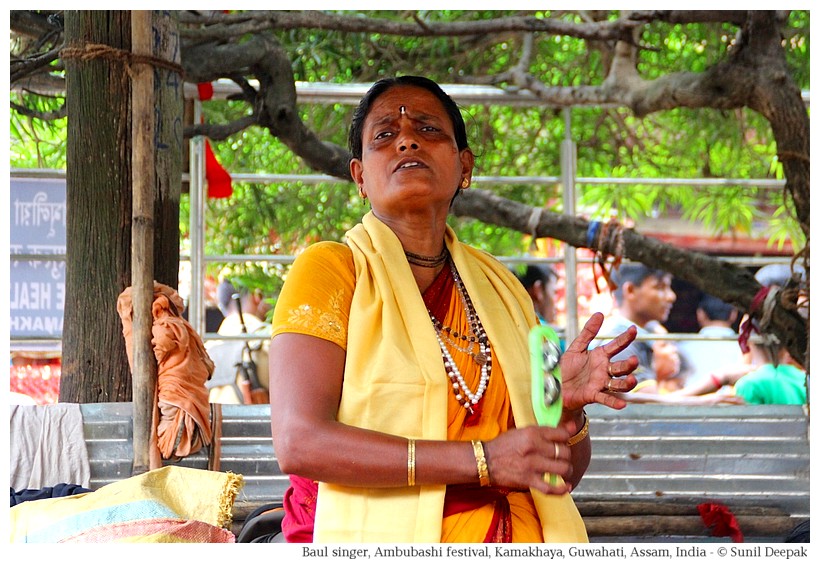 This is just a brief glimpse into the rich traditional dance, theatre and music heritage of Assam in the north-east of India. I lived for about a year and half in Guwahati, the capital of Assam, during 2015-16. This was a great opportunity to know and appreciate some of those traditions.