The frescoed houses of Spilimbergo

The tiny medieval town of Spilimbergo (Pordenone) with its frescoed houses is one of the most beautiful cities in the north-eastern part of Italy. Narrow cobbled streets that go up and down on the gently rolling hills, make it a delightful place to visit. 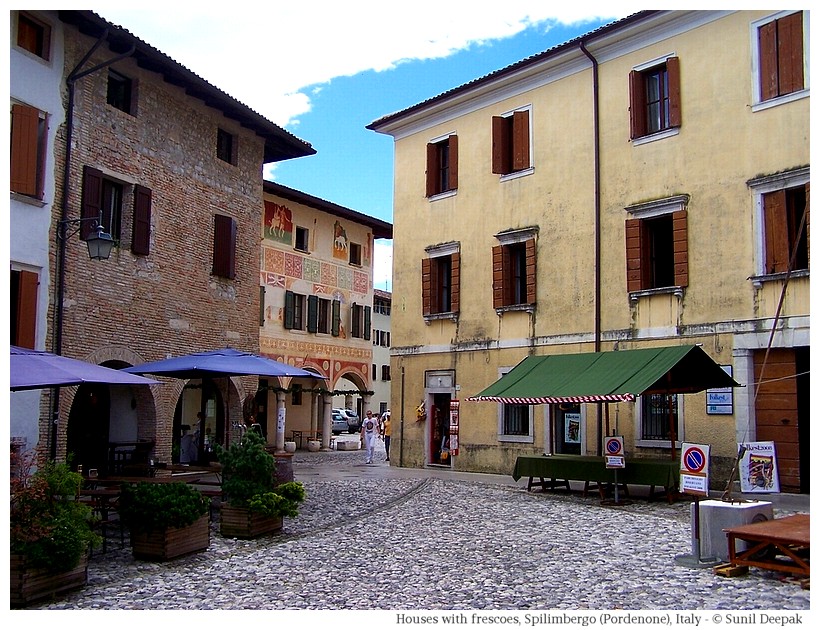 The characteristic feature of the medieval houses of Spilimbergo, are the five-six hundred years old frescoes or the paintings on their outer walls.

There was an old castle in this area from the pre-Roman times. The city really grew and became important in the 11th century when the Count of Spengenberg from Austria came and settled here.

Till the arrival of Napoleon in north Italy in the 1790s, it was a part of the Republic of Venice. After a few years under the French rule of Napoleon, it came under the Autrian empire. It joined Italy in 1866.

The city was destroyed in 1976 in a terrible earthquake but since then it has been rebuilt. It is incredible that most of the old houses with their frescoes have been restored to their original glory.

It is a tiny city that you can easily cover in a couple of hours of walking. Close to the cathedral, towards the eastern edge of the town, there is a big parking area. You can leave your car there and start your visit from the Cathedral.

The Duomo (Cathedral), is dedicated to St. Mary. Its construction was started in 1284. It was also damaged in the earthquake of 1976 and has been restored. Its inner walls have some wonderful frescoes from 1300s, supposedly the works of an artist called Vitale of Bologna. If you like admiring art and medieval frescoes, you may wish to spend some time in exploring this cathedral.

Like the rest of the city, the outer walls of the Cathedral, still have a few frescoes, though most of them are lost. Still you can imagine how beautiful and imposing it must have looked when it was in its full glory. 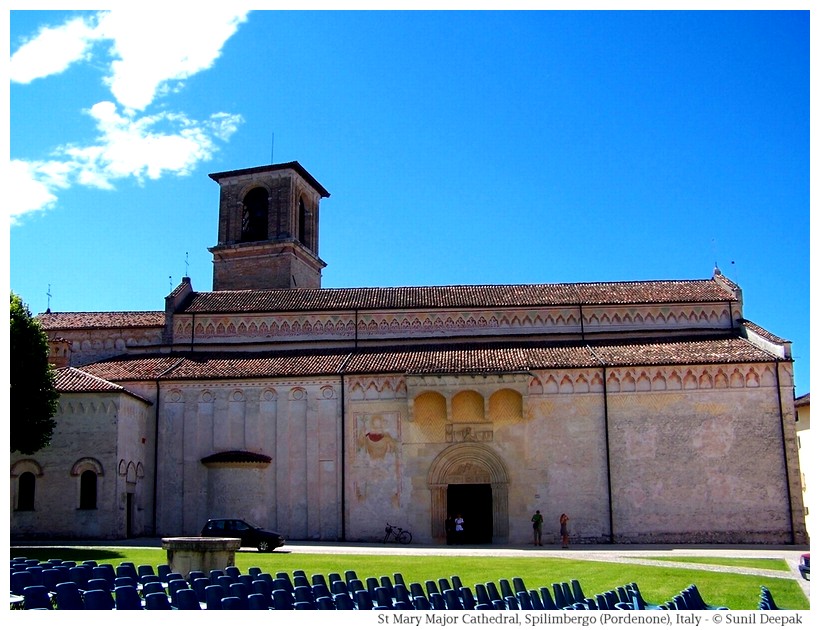 The Castle of Spilimbergo is very close to the Cathedral.

The oldest parts of the Castle of the Counts of Spengenberg near the eastern gate of the medieval wall, are from 11th century. Over the centuries more buildings were added to them. It is built in a semicircle and it does not look like a castle. Rather, it is more like a series of noble houses with frescoes in different styles that vary from Romanic to Gothic to Renaissance. The Spengenberg family also gave the name to the city Spilimbergo. It is an amazing building in gentle colours, that somehow make me think of autumn. 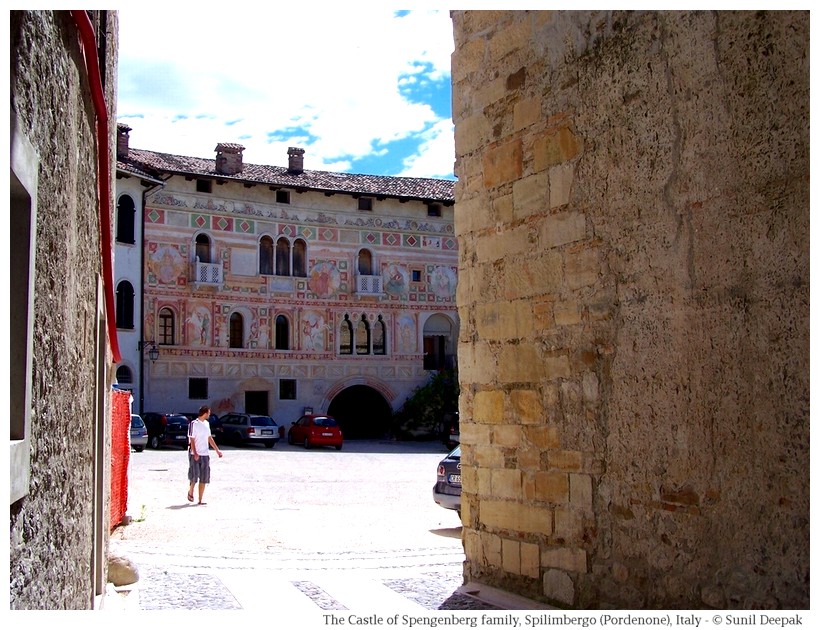 Palazzo di sopra (The upper palace) is a noble house from 1300s, situated at the top of a small hill, that was partly rebuilt in 1500s. It was again damaged during the earthquake in 1976. It has been completely restored and has some beautiful frescoes on the outside and nice paintings and stucco work with plaster-of-paris inside. It also has a wonderful garden. It hosts some municipal offices but can be visited by tourists. The upper floor of Palazzo di Sopra provides views of the surrounding Alps mountains and the neighbouring towns including the famous San Daniele Del Fruili. Beyond the mountains lie Austria and Slovenia. 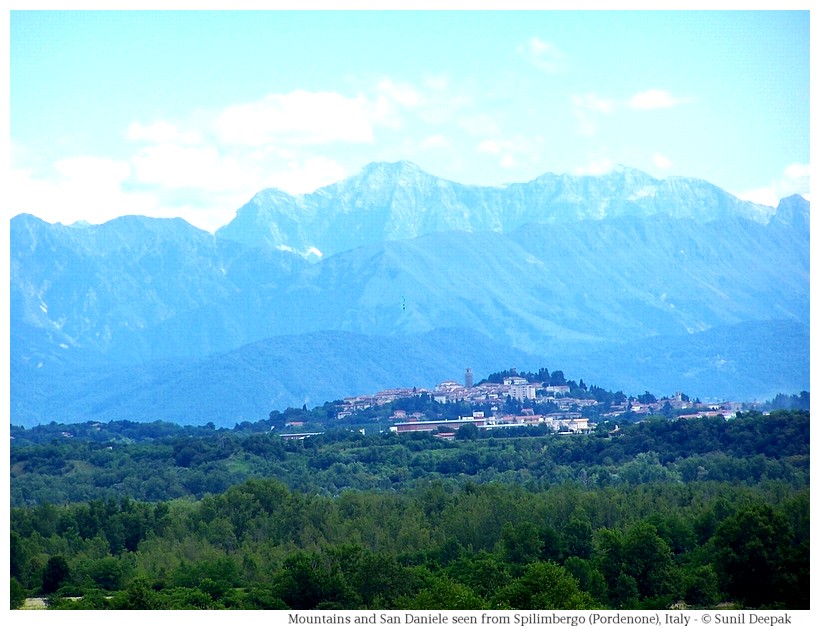 Corso Roma is the most important street of the old city centre of Spilimbergo and walking along this street you can reach the western boundary of the city with its medieval entry gate and the clock tower. The old city walls have almost disappeared from this part of the town. The clock tower has memorials of Italian resistance fighters from the second world war who were killed by Nazi-Fascist forces. 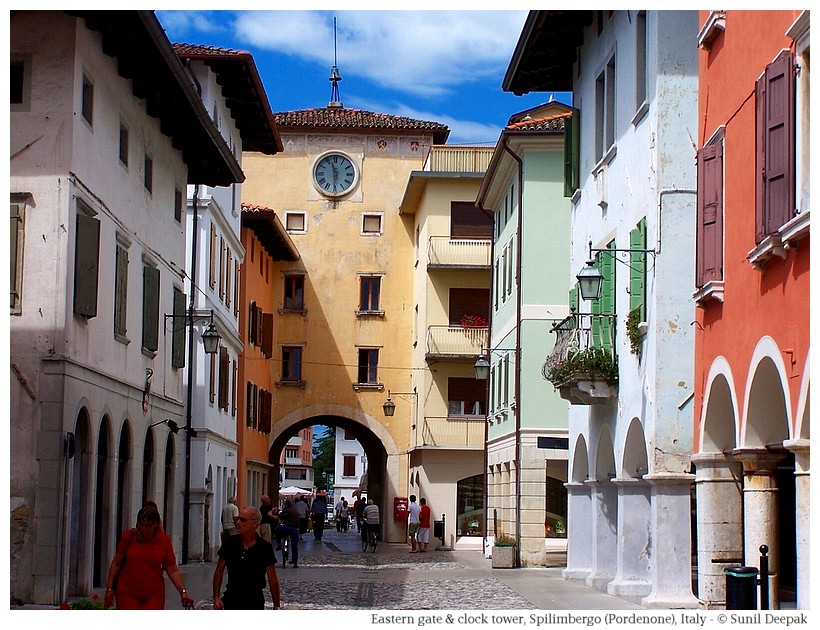 One of the houses on Corso Roma, close to the eastern tower, is especially famous for its frescoes from 1500s, depicting the mythical stories of Hercules. It is called Casa Dipinta (Painted house). These frescoes are supposed to be the work of a well known artist called Pordenone. 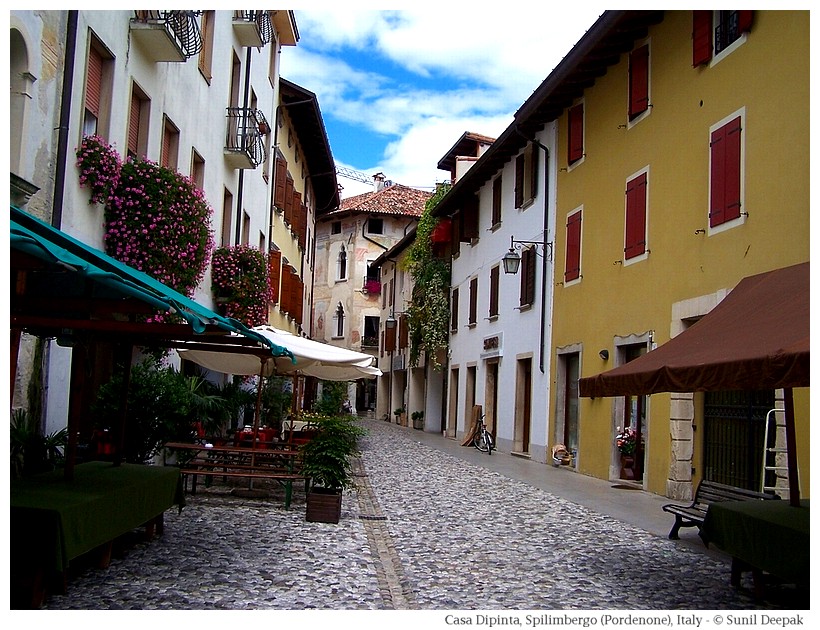 Winding cobbled streets of Spilimbergo with their beautiful medieval churches, many of which host some important art works of local painters, give it an old world charm. This street also has many bars and ice-cream parlours, where you can sit down and enjoy the wonderful ambiance of this town. 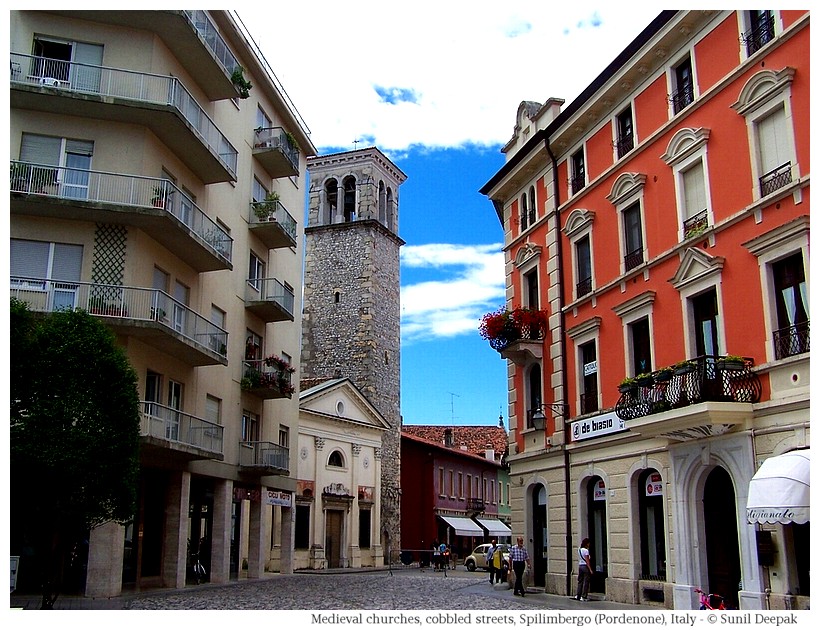 If you have time, explore the tiny streets going up and down the hills, branching out from Corso Roma. Discovering some enchanting corners of the medieval town, usually ignored by tourists in a hurry, can be very rewarding.

You can also take this opportunity to visit San Daniele del Fruili, a few kilometres away, famous for its ham.

If you are on holidays at one of the towns on the Adriatic coast like Lignano, Bibione, Jesolo & Caorle and are looking for a day tour immersed in art and history, consider visiting Spilimbergo to admire its medieval houses with their wonderful frescoes. It is like an open-air museum.

Make sure to wear comfortable shoes for this trip, since walking on pebbled streets can be tough with high heels or thin-soled shoes.