The Dancing Gods of Thayyem

"Theyyam" is a religious folk dance from the south of India. It is characterised by intricate make-up and beautiful costumes in striking colours with a predominance of orange, red and yellow. A visual kaleidoscope with a profound spiritual connection makes Theyyam a unique experience. 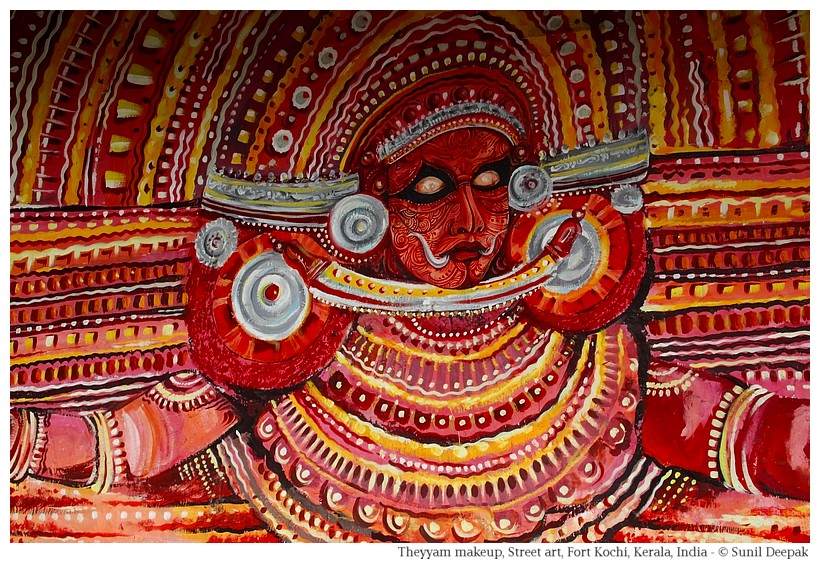 Spiritual Background and Meanings of Theyyam

Hinduism is based on the idea of all pervading universal consciousness known as Brahman, which has no beginning or end. Thus, mountains, trees, animals, birds and humans, everything animate or inanimate are the expression of Brahman and indicate a unity of all life forms.

In Hinduism, this idea of Brahman is coupled with Gods, one deity for each of the millions of life forms. In Theyyam, the dancer asks a God to come and become manifest in his body. Thus, during the dance-ritual, the dancer becomes an expression of God.

In other parts of India, there are persons who can go into trance and become "a channel of God" to speak and interact with people. For example, in north India they call it "Devi aayi hai" or the "Goddess has come". However, in Theyyam the invocation of God in human body is formalised and accompanied by specific costumes and rituals. 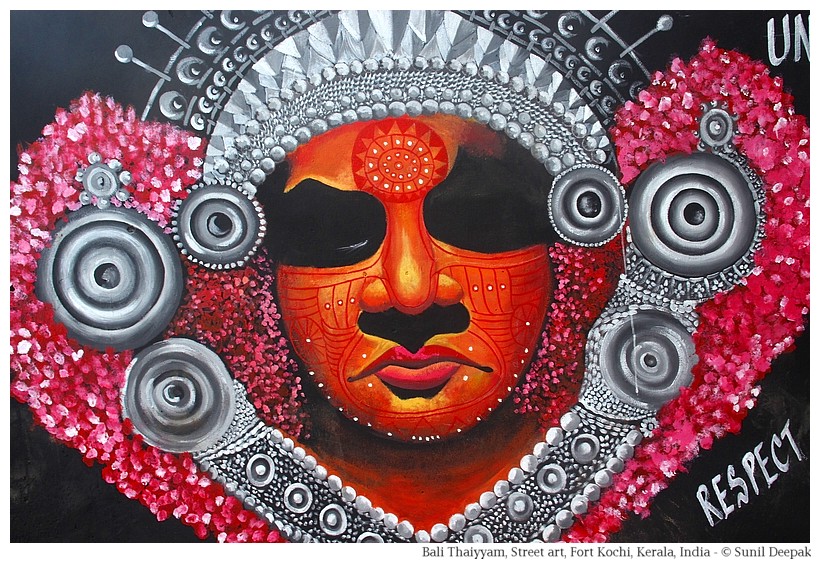 Theyyam is widespread in northern parts of Kerala state, especially around the town of Kannur. Each village and temple has its own Theyyam based a specific God or Goddess or local hero.

Around three weeks before the Theyyam celebration, the dancers start a period of abstinence to purify their bodies and minds. One day before Theyyam, they carry out a special invocation prayer called Thattam.

On the day of Theyyam, the dancer prepares his make-up using natural colours. During the make-up, their faces will carry complex designs for their specific Theyyam God and they will wear the ritual dress which is created and maintained by the dancer's family. The facial make-up for each Theyyam is also known as "Face-writing". The costumes include an elaborate head-dress and a breast-plate.

After completing the make-up and putting on the costume, the Theyyam dancer is shown his face in a mirror. This ritual is called Mukhadarshanam. It completes the arrival of God in his body. From that moment he ceases to be seen as human and becomes the manifestation of a specific God or Goddess. 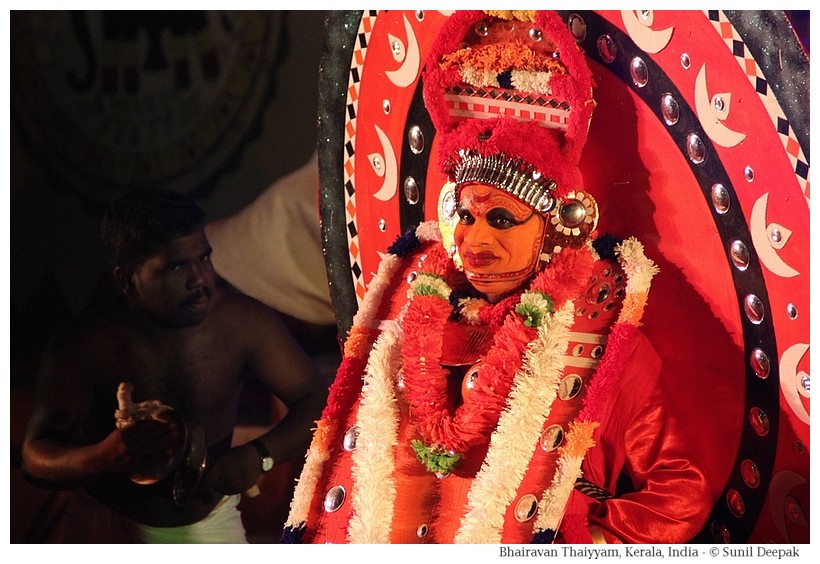 During Theyyam, the specific story or the myth associated with that God is re-enacted. It takes place in front of a shrine, usually a sacred groove of trees. There is no stage and the dancer remains surrounded by believers. People play an active role in the enactment of the sacred story. They ask for the blessings of the God and sometimes ask questions to the Theyyam about their personal issues and problems.

Challenges Facing the Theyyam Traditions
Usually Theyyam dancers do it as a part of their family tradition and there is no or little income from it. With increasing modernisation, urbanisation and technology, it is becoming difficult for individuals to maintain complex social traditions like that of Theyyam, even if it has deep roots in the myths and cultures of the local societies.

Traditions like Theyyam are also under attack because some persons look at them as superstitions, or old fashioned backward rituals. They ignore its social roots and relevance, and look at it in isolation.

Theyyam plays a social role in the complex hierarchy of castes among Hindus. For example, in an interview, a Theyyam dancer said that though socially he belongs to a lower caste, when he becomes Theyyam, persons of all castes including Brahmins and upper caste persons must bend before him and ask for his blessing. 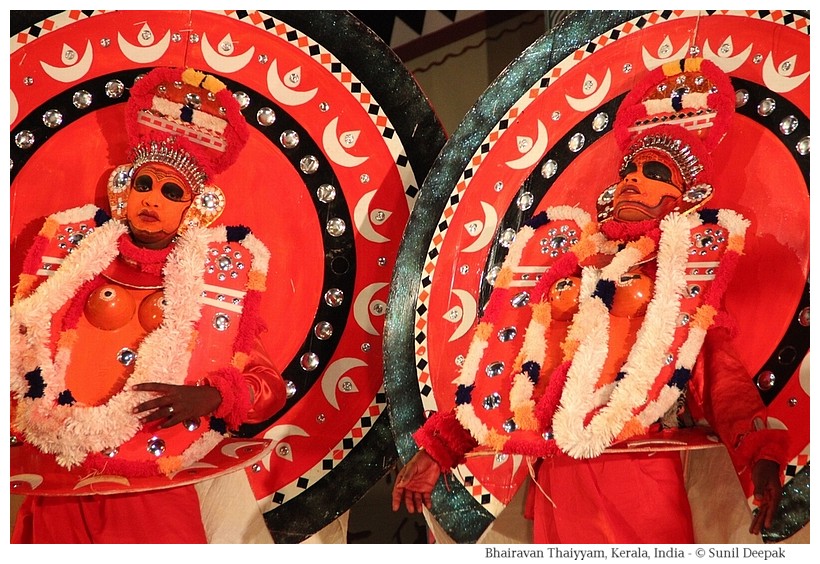 Over the past few years, government departments of culture and tourism are supporting to keep alive Theyyam, by including it as a part of cultural programmes and providing some income generation opportunities to the Theyyam dancers. Even if in such programmes, Theyyam is perceived only as an exotic visual experience, it provides an incentive for the dancers to valorise their skills and to continue the tradition in their own local communities.

The Folk-lore Museum of Kochi has a collection of wooden heads illustrating the different "Face-Writing" designs made for different Gods and personas used in Theyyam. One of these is shown below. 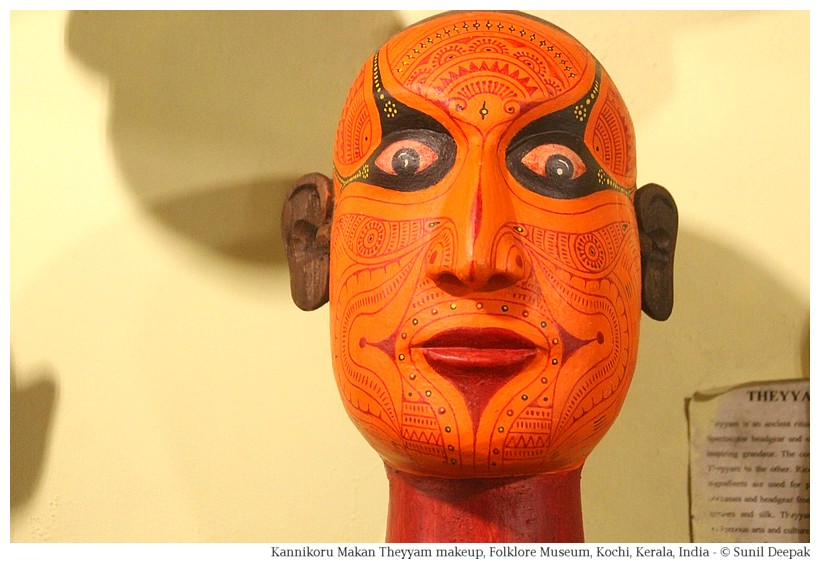 Theyyam ritual dances are organised in villages in north Kerala during winter - especially between October to April. There is a weekly calendar of Theyyam events happening in different villages around the city of Kannur. You can find out it from different websites - here are two examples - TheyyamCalendar and KannurTravel.

Thus, if you want to observe a Theyyam ritual dance in its local village context, check the calendar and plan your visit to Kannur.

I have only seen Theyyam as a part of cultural programmes, as street art and as museum artifacts. I have used the images from those different encounters with Theyyam in this post. However, I hope one day to visit Kannur and see it as part of the local spiritual-religious tradition. 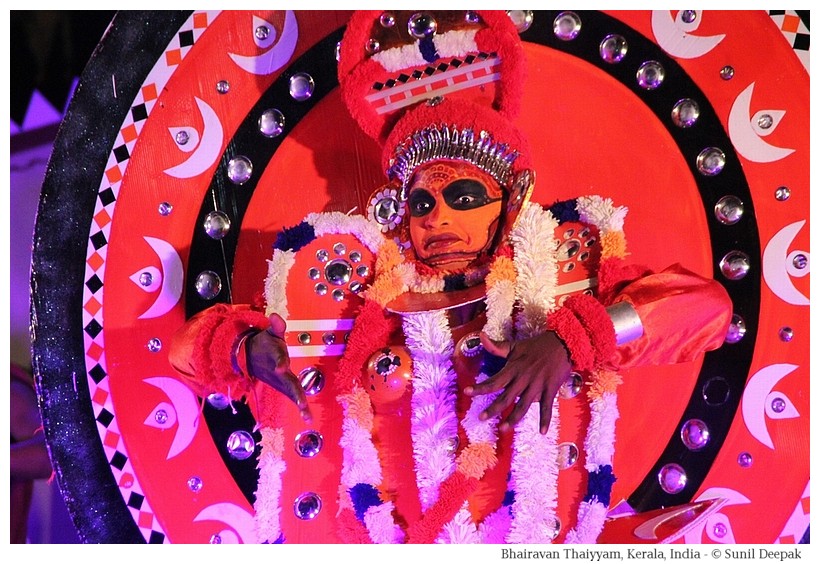