The Prince of Ayodhaya & Ramayana 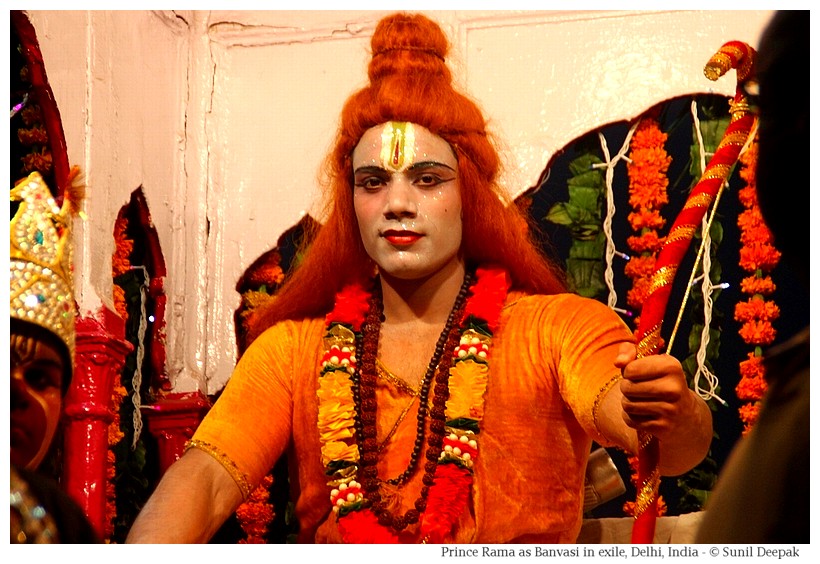 This post presents some of my favourite images related to Ramayana, the story of Rama.

The central theme of Rama's story is that of obedience and respect of the parents. The widespread enduring popularity of this story after so many centuries continues to surprise people.

Rama was a prince, the eldest son of king Dasharath of Ayodhaya in north India. He married princess Sita. 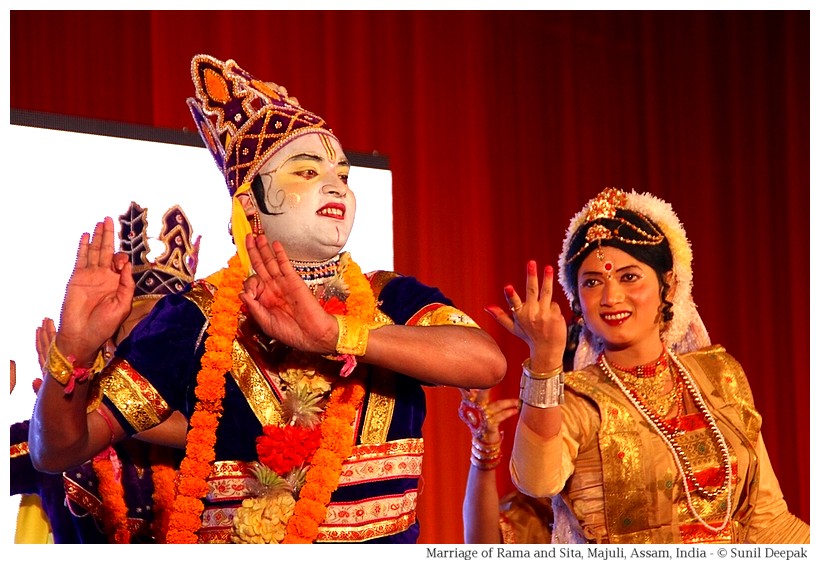 However when the time came for Rama to become the king of Ayodhaya, there was a problem. His step-mother Kekayi wanted her son Bharat to be the king.

King Dashrath had three wives. Kekayi was his youngest wife. She asked the king to send Rama to exile for 14 years and in his place, install Bharat as the king of Ayodhaya. The old king was bound to Kakayi by an old vow and was forced to accept her request, even if he felt that it was unjust.

Rama assured his father that he will obey and live in exile for 14 years. His wife Sita and another borther, Laxman, decided to follow him in his exile. The old king died. Bharat, who was away and did not know what had happened, came back to Ayodhaya and discovered that he was supposed to be the king. He refused and instead went to the forest to seek Rama and asked him to come back.

However, Rama said that he had promised their father to live in exile for 14 years and he can not break his promise. Thus, Bharat went back to Ayodhaya and governed it as a caretaker king, waiting for Rama to come back. 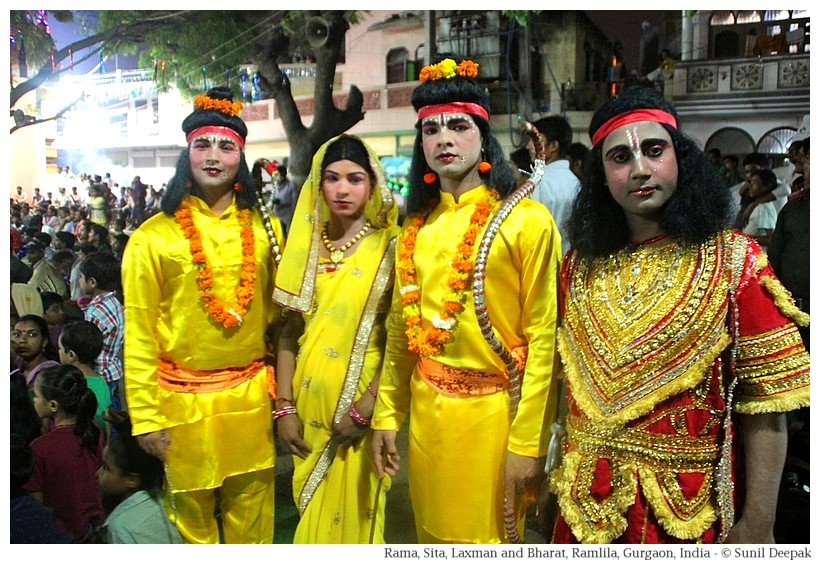 In the forest, Sita was kidnapped by the Rakshas king Ravan. With the help of the Ape king Sugriva, his Ape army and the Ape warrior Hanuman, Rama foght with Ravan and killed him. In the mean time 14 years had passed and thus, Rama returned to Ayodhaya and became the king.

Other Characters from Ramayana

While the images above are about Prince Rama, his Sita and his younger brother Laxman, below you will find some images of other characters in Ramayana.

Rakshas king Ravan: People unfamiliar with Indian way of reasoning, think of the Ravan as a kind of demon. However, in Ramayana, Ravan is also a learned Brahmin and there is a tradition to praying to him. The image of Ravana below is from Kalakshetra in Guwahati (India). 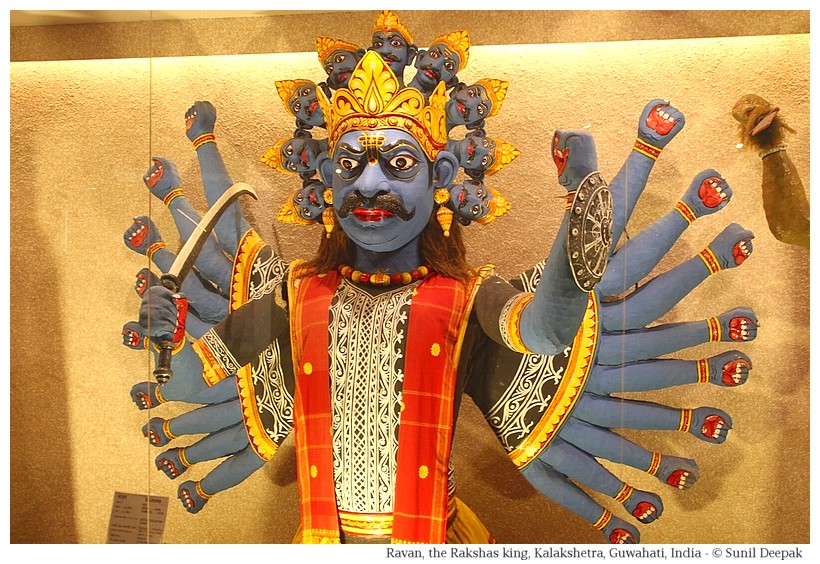 Hanuman and the Ape army: Hanuman is the chief helper and supporter of Rama. He is the son of the wind god and can fly. He is also considered as the patron saint and defender of unmarried young men, to whom he teaches celibacy. The image of Hanuman below is from a Ramlila procession in old Delhi (India). 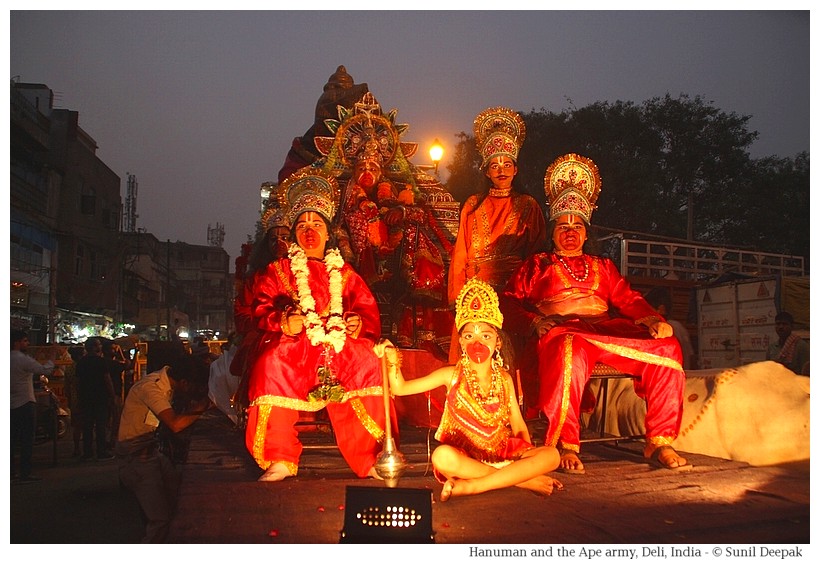 Here is  another image of Hanuman from a Kathakkali performance in Bologna (Italy). 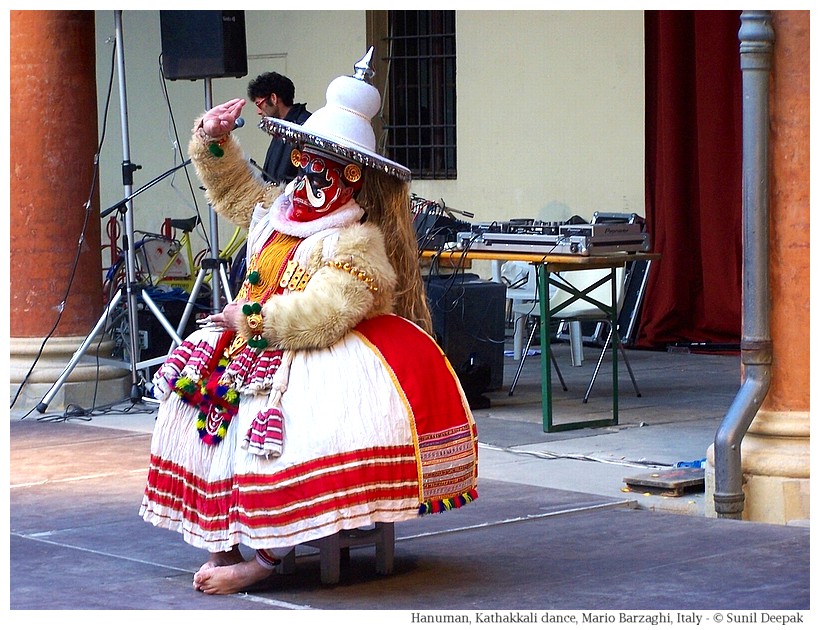 Jatayu Garuda: The Garuda bird named Jatayu is a friend of Rama in the forest. He tries to save Sita from the kidnapping. Below you will find images of his sculptures from Assam (India) and Bangkok (Thailand). Garuda is also the name of the Indonesian airlines. 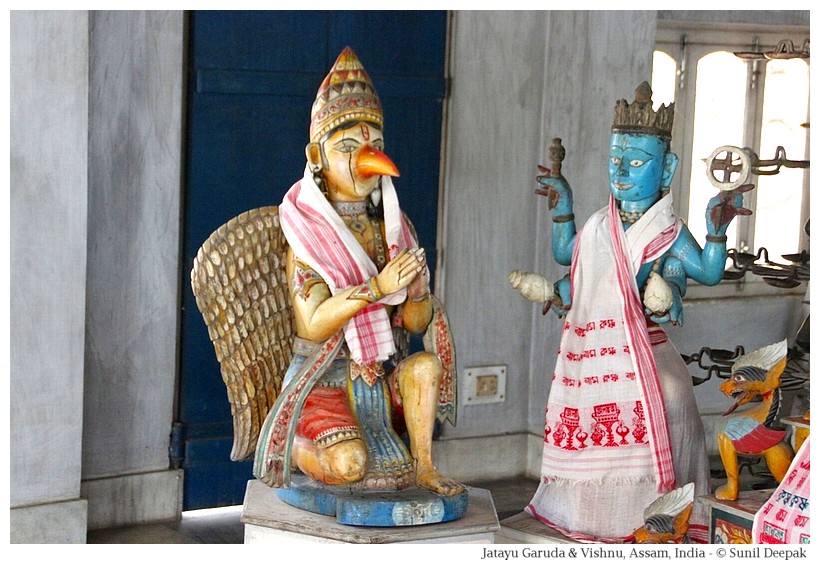 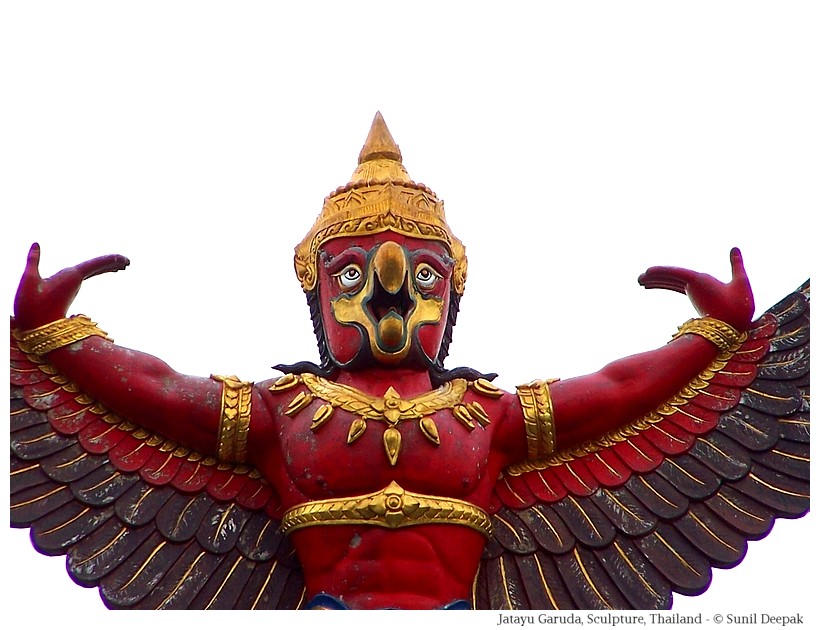 Kevat, the boat man: Ramayana has different characters of simple tribal persons such as Kevat, the boat man, who play an important role in the story. During Rama's exile from Ayodhaya, Kevat organises their crossing of the river Sarayu. The image below has Kevat and Prince Rama from a Ramlila in a village in Gurgaon, not far from Delhi (India). 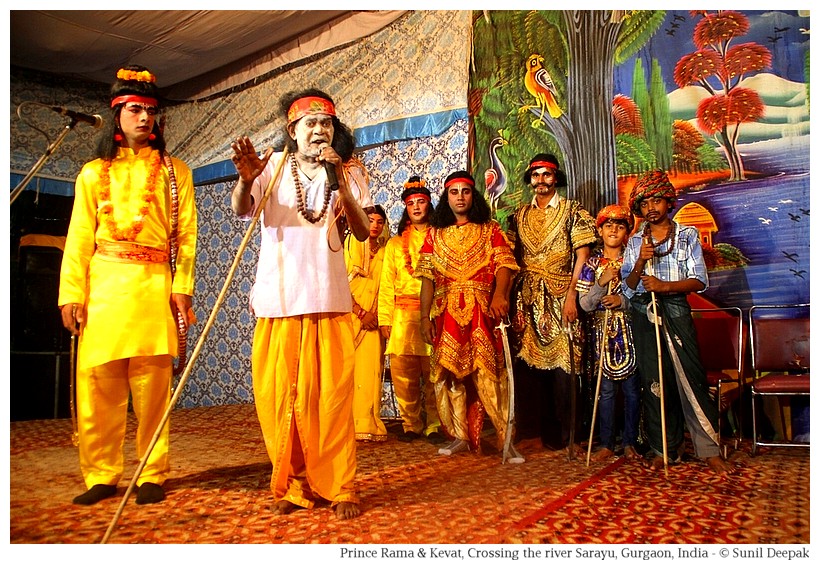 The oral history traditions of India credit a sage-poet called Valmiki for having written the first version of Ramayana. Valmiki's Ramayana was written in the ancient Indic language Sanskrit and has 24,000 sholokas (verses) divided into seven chapters.

Another version of Ramayana written in Avadhi, a dialect of Hindi, in the 16th century called "Ram Charit Manas" made it more accessible to common persons. This was written by Tulsidas Goswami. It is commonly read aloud in village squares and along the rivers in different parts of India. The image below is from Varanasi where Ram Charit Manas is being recited on the banks of river Ganges. 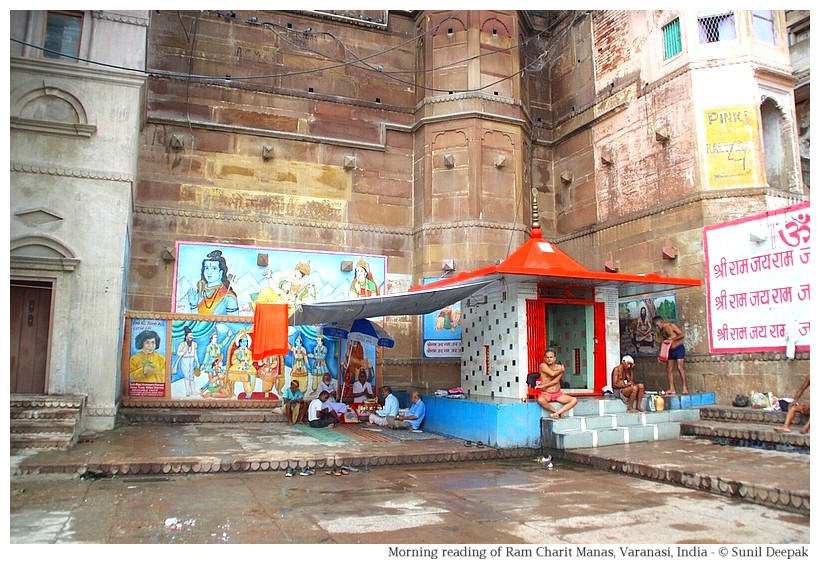 Outside India, Indoensia has Kakawin Ramayana, Thailand has Ramakien, Cambodia has Reamker, Laos has Phra Lak Phra Lam, Myanmar has Yamayana and Sri Lanka has Janakiharan. In Nepal, the Dashain festival celebrating the win of Rama and the defeat of Ravan is the most important religious event in their calendar.

In Thailand, the kings take on the name of Rama and the ancient capital of Thailand was called Ayutthaya. Many Asian countries have living traditions of presenting the Ramayana stories through dance, theatre, puppets and other art forms. The image below has Rama, Sita and Laxman from Thailand. 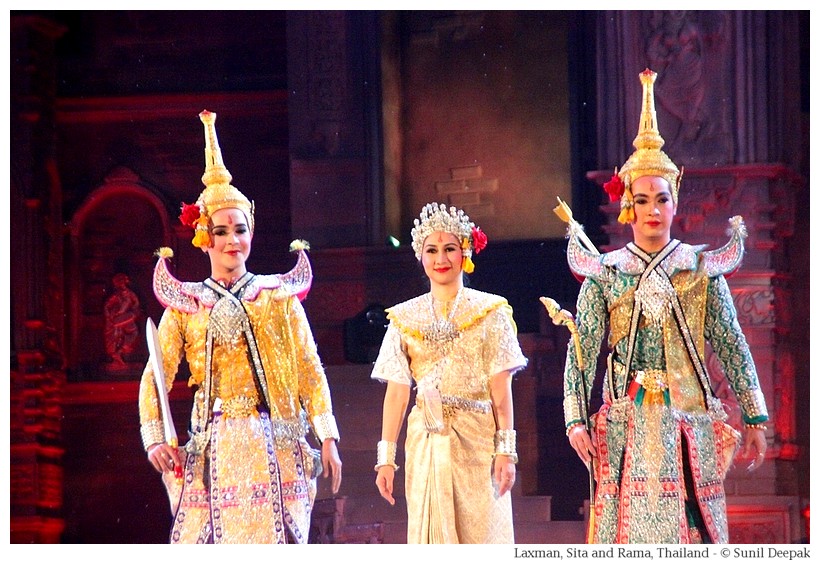 In India, many Hindu homes have a copy of Ramcharit Manas. In villages there are traditions of singing parts of Ramayana during festive occasions. In autumn each year, India celebrates the ten days of Dusshera, symbolising the ten days of war between Rama and Ravan, described in Ramayana. During these ten days, towns and villages organise popular plays called Ramlila, to present the story of Ramayana. Most images of Rama in this post are from these Ramlila celebrations.

The tenth day of Dusshera, coincides with the death of Ravan, and is celebrated as Vijaya Dakshmi. Twenty days later, the return of Rama to his kingdom in Ayodhaya is celebrated as Diwali, the festival of lights.

Even the other Indic religions, including Buddhism, Jainism and Sikhism include references to the stories of Rama. For example, the stories about Buddha describe him as a prince of Ishvaku dynasty, the dynasty of Rama in Ramayana.

Perhaps the first oral traditions of Ramayana had started when the urban settlements and agriculture were still new and the memories of ancient hunter-gatherer societies was still alive. Rama's exile in the forest to the hunter-gatherer way of living must have touched deep feelings of identification in the persons. 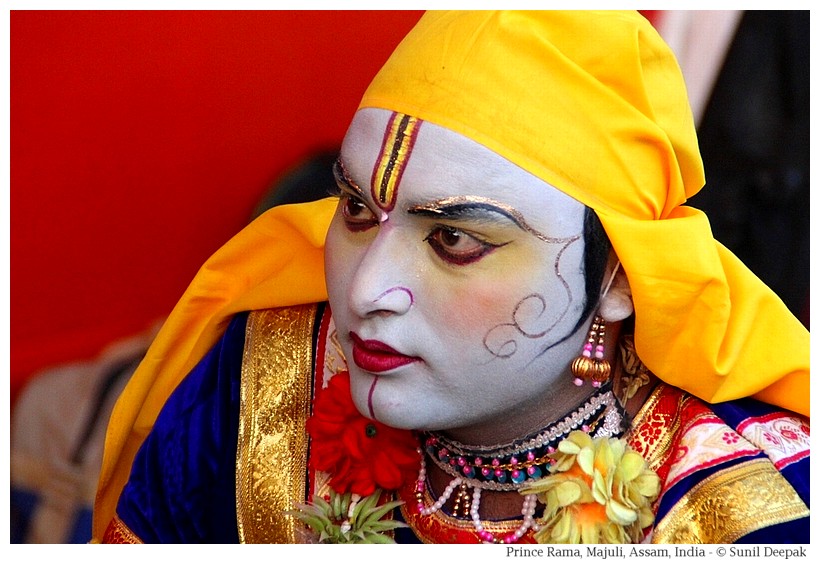 Thus, the story of Rama, a tradition going back at least a few thousand years ago, still continues to resonate with millions of persons around different countries. Rama is considered an Avatar of Vishnu and Ramayana is part of the sacred texts of India. Even today persons in rural India greet each other with a "Ram-Ram" and say goodbye with a "Jai Ramji ki". The name of Rama was also there in the last words of Mahatma Gandhi when he was shot and killed, he died saying "Hey Ram".

As a child, I grew up in the narrow streets of Old Delhi. Reading the stories of Ramayana in a children's magazine called "Chandamama" and listening to the chowpais (verses) of Ram Charit Manas in community readings in the neighbourhood.

Why did Rama's story had such a deep impact on the communities in India and other Asian countries? One of the reasons could be that its values - love and respect for the parents, obedience, respect for brothers, were all values necessary for the survival of agricultural societies based on extended family systems. Thus, the story found acceptance in different countries of Asia. (Another image of Thailand Ramayana below). 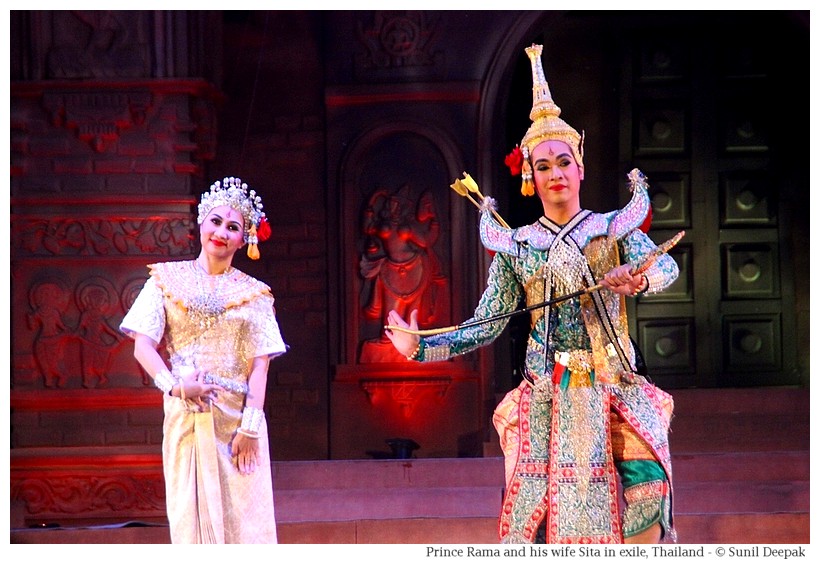 Another aspect of Ramayana is the understanding about the spiritual dimension of life along with renunciation of material comforts and living in isolation, which is also seen in Prince Gautama's abandonment of his palace and his wanderings in the forest to become Buddha. Material comforts versus renunciation is a common and enduring theme of different Indic religions, sacred stories and mythologies.

Ramayana and the story of the prince of Ayodhaya has survived for centuries, growing like a tree with a common root but branches going in different directions.