The tiny seaside town of Ushimado in south-west Japan is famous for its beautiful sea and verdant islands. It is also a heritage town with glimpses of the old Japan of wooden houses and traditional shrines and temples. 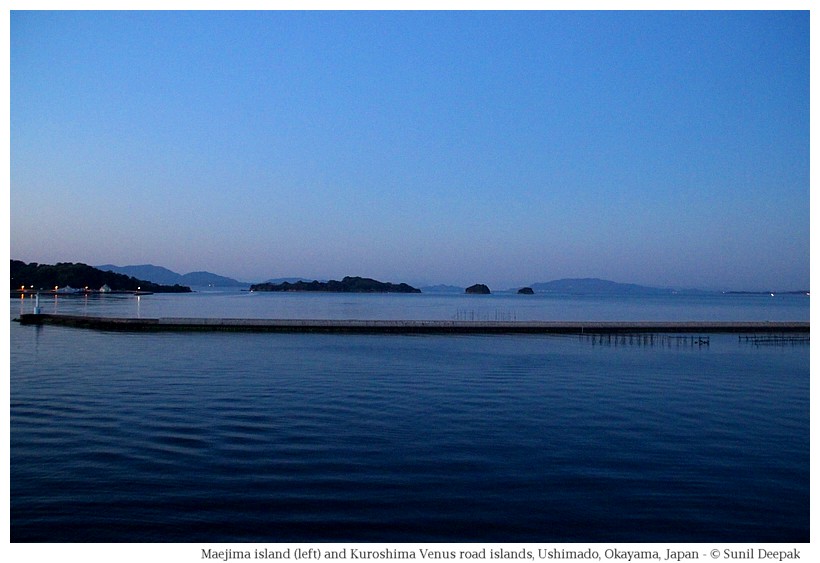 In Ushimado you can see three small islands close to each other. At low tide you can walk from one island to the next and this passage is called the Kuroshima Venus road. You can admire those 3 islands in the image above.

There is a legend of a monster called Ushi-oni, who looked like a cow. Empress Jingu came here disguised as a man after her husband died. She met the monster and killed it. Different parts of Ushi-oni fell in the sea around Ushimado forming the different islands. The original name of Ushimado was Ushimaro - Ushi (cow) + Maro (killed). This legend is celebrated in the Ushimado shrine in the city.


During the Edo Period (1603-1868), Ushimado was a ship-building town and was used as a resting point by Korean Royals on their way to Edo.

Ushimado comes under Setouchi in the Okayama prefacture. It is about 30 km from Okayama. You can take an Ako line train from Okayama, get down at Saidaiji or Osafune and then take a Ryobi bus to Ushimado.

At Ushimado, I stayed at hotel Limani. Looking out at the beautiful islands and the sea was an incredible wake-up experience, as you can see from the image below. 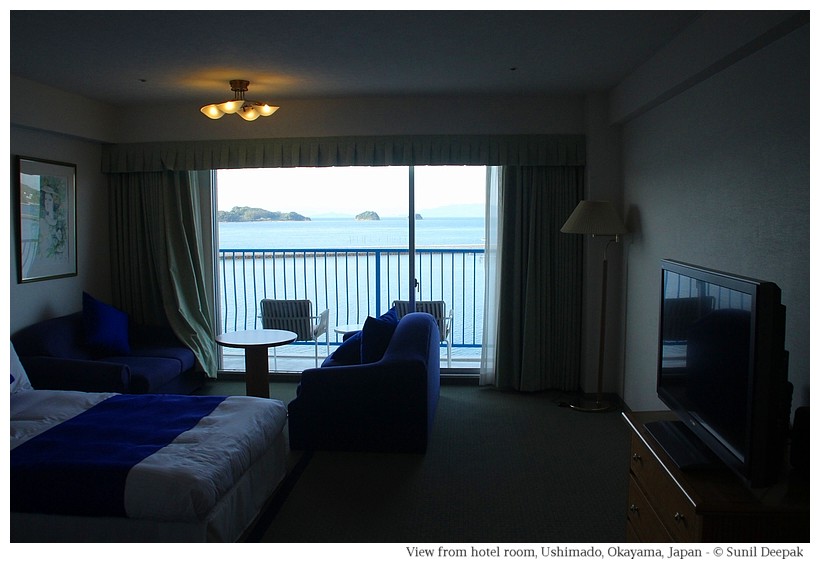 The lighthouse of Ushimado, is a traditional wood tower with a pyramidal roof and it is mounted on a square stone pedestal (image below). In the image below, you can see as it appears from the sea. 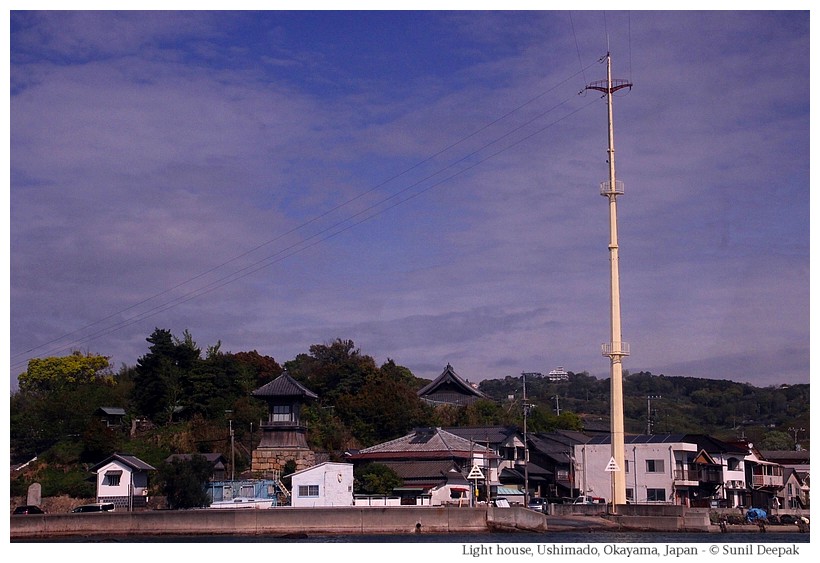 One early morning I explored the main street of Ushimado called Shiomachi Karakoto. The Kaiyu museum was closed but just behind it, I found an ancient temple - Honrenji. It was built for welcoming the Korean visitors and is considered a cultural heritage site. 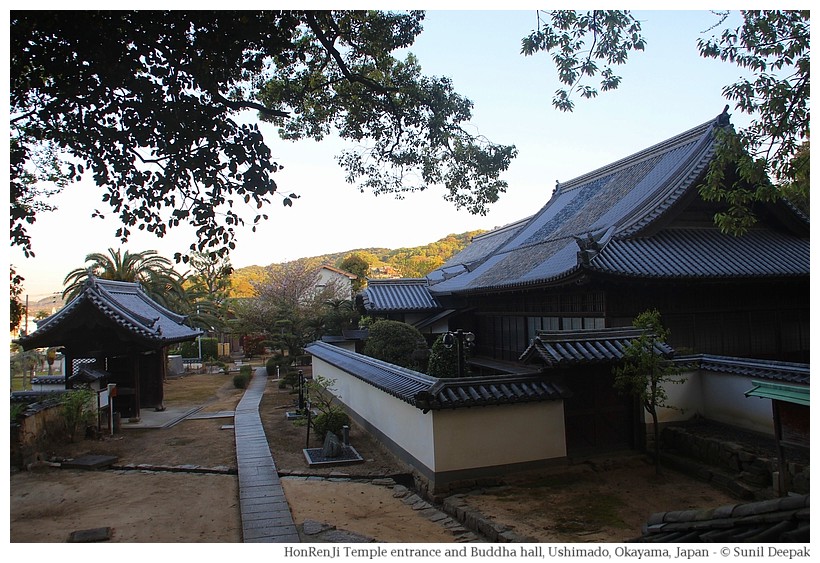 A Koromon (gate) marked the entrance of the temple. The main entrance led to a big wooden building, probably the Butsu-do, the Buddha hall.

Majority of temple structures were in wood. The buildings had huge curved roofs, almost as big as the rooms below. To the right, stairs led to a terrace overlooking the sea with some more temples. 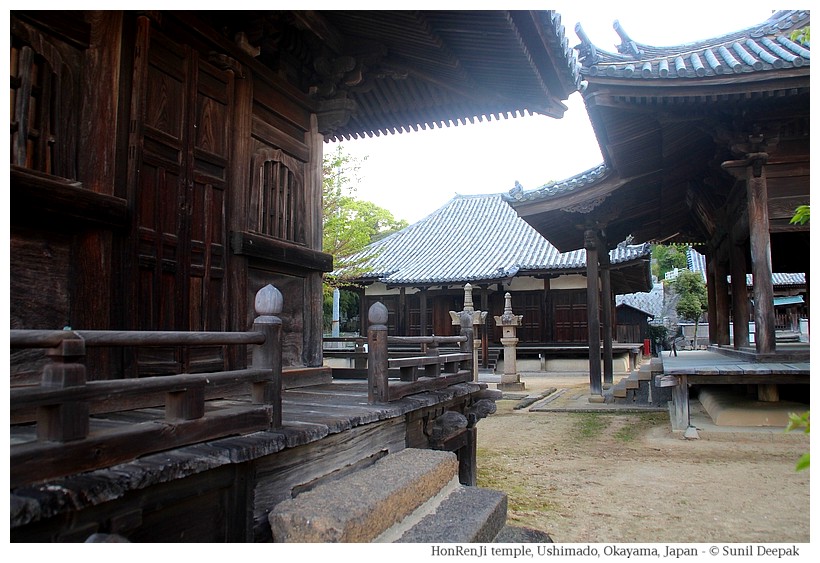 There was a 3-storied Daito (large pagoda) on the terrace close to the edge overlooking the sea. Each part was made in rectangular form with wooden fenced balustrades. There was a mokoshi (skirt-shaped) roof on the lower two levels and a pyramidal roof on the top floor. 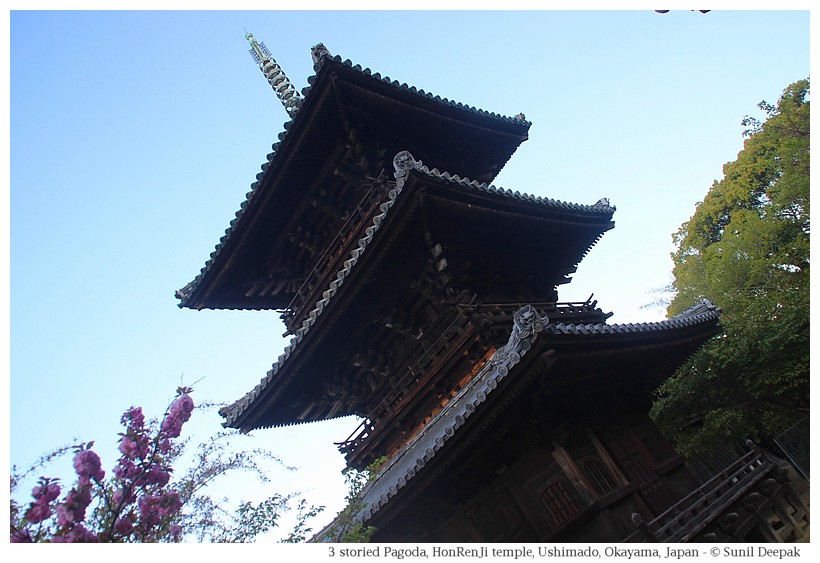 Next to the Daito, there was a massive bell tower with a stone and a rectangular wooden base, on which which a big copper bell was mounted, covered by a beautiful curved roof. 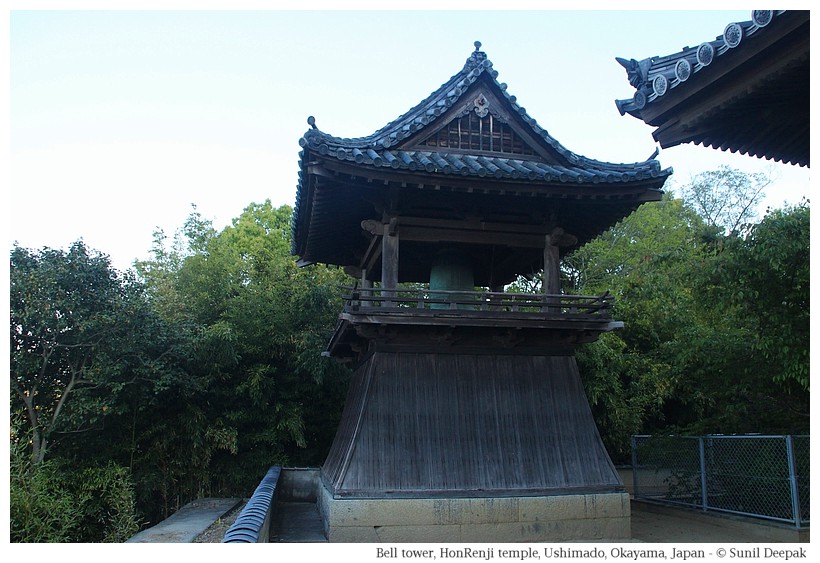 Behind and above the temple there was a cemetery area. Being early morning it was very quiet and peaceful. The different temple buildings were closed, still I really enjoyed this visit. 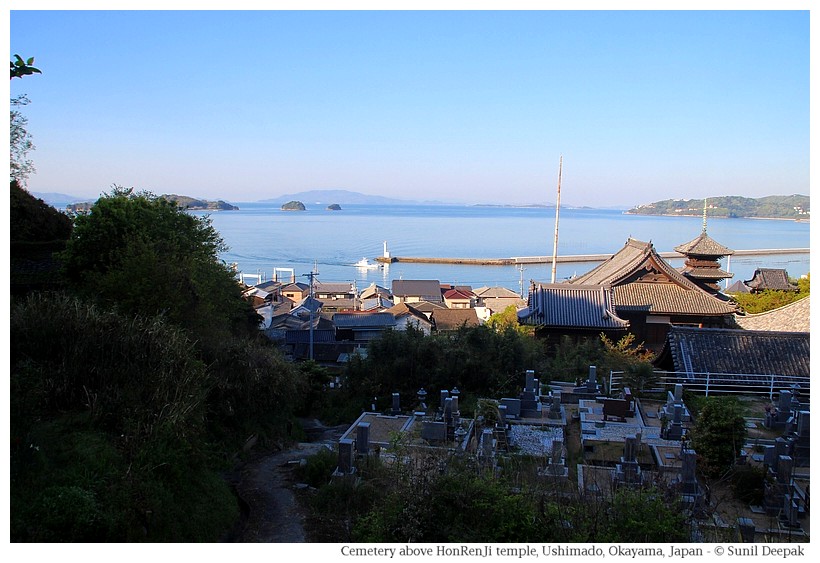 This is a Shinto shrine at the top of the hill above HonRenJi temple. It is dedicated to Tenjin, the god of scholarship. 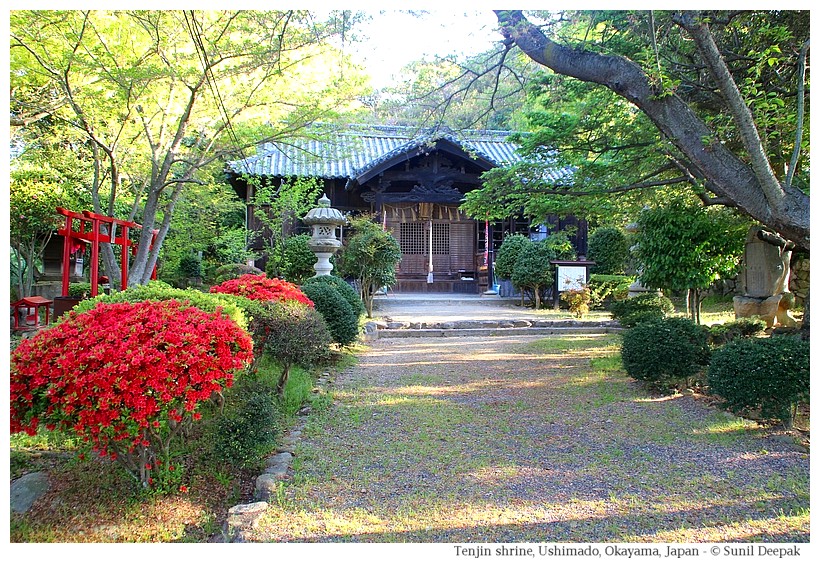 Tenjin was a 9th century poet called Sugawara no Michizane, an important official in the imperial court of Emperor Uda. After the death of the emperor, he was exiled and died as a lonely man. Seventy years after his death, Michizane was deified and became Tenjin. His shrines were built in different parts of Japan. The legend says that he had visited Ushimado during exile and cried on the top of this hillock.


Long stairs along with a Koromon gate led to the shrine. The main temple was closed. On the left, there were Inari shrines marked by vermilion coloured Torii gates. One Inari shrine was full of Kitsune (white foxes), the messengers to the god Inari. Inari gods are linked with rice-crop and fertility. Kitsune were shown with their right front paw raised up to protect an urn, and each had a golden round tablet in the mouth. 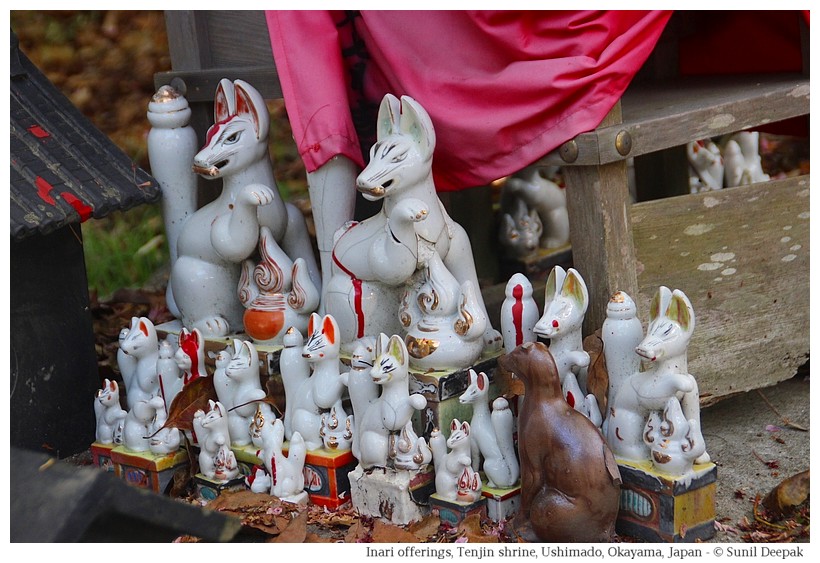 At the bottom of the hill, there was a tall brick tower covered with creepers in an ancient looking courtyard. I could not find out the significance of this tower. Nearby there was a more recent iron tower with a weather-wane. 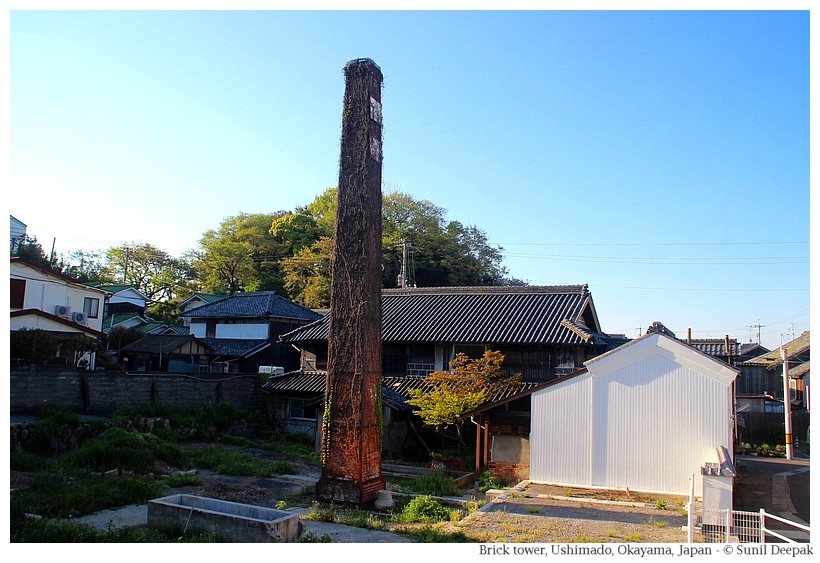 This was another Shinto shrine at the top of a hillock. Kompira-gu is a god of the sailors. Kompira shrines were originally made by Shugendo sect in Kotohira mountains of the Kagawa prefacture and are also called Kotohira-gu. Outside its closed latticed doors there were banners of rope and straw. 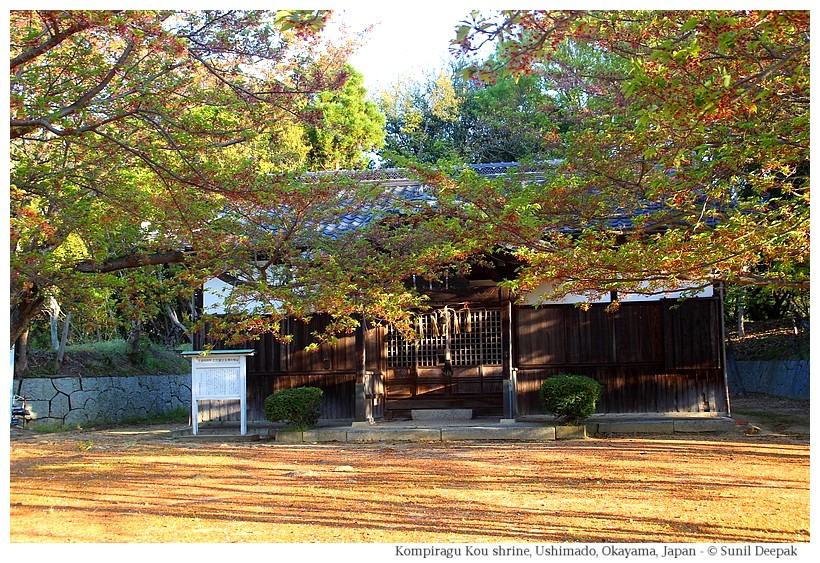 The views of the sea, islands and surrounding Ushimado were beautiful from this shrine.

This Inari shrine was on the main street of Ushimado, behind a house, where a row of vermilion Torii led to small shrine. Praying to this Inari was supposed to grant you a long and happy life. A holy person from Fushimi Inari in Kyoto had established this shrine in Ushimado. 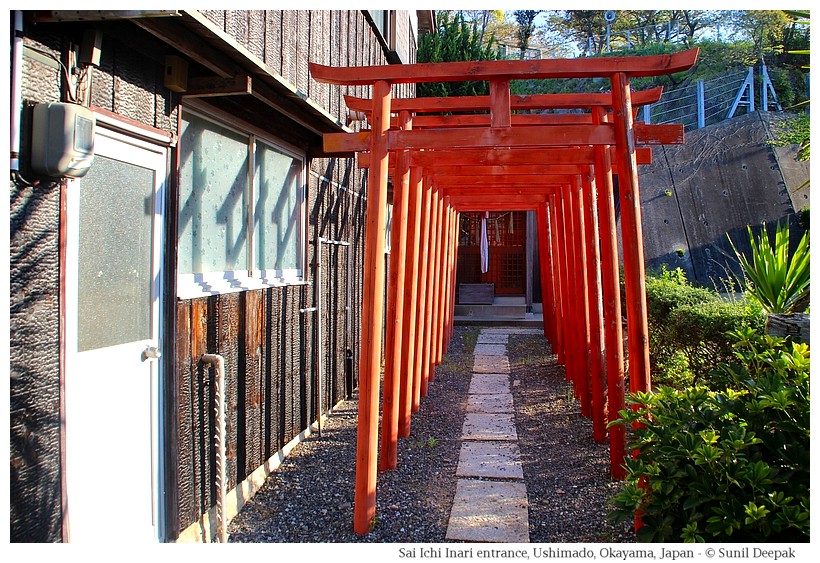 A Buddhist shrine and the cemetery

One evening while walking to the back of the hill of the Tenjin shrine, I came across another Buddhist shrine linked to a cemetery. This shrine had seven carved stones, all wrapped in red wool-covers. The central stone had a bigger statue of Buddha. Behind the Buddha stones, there were seven round stones. 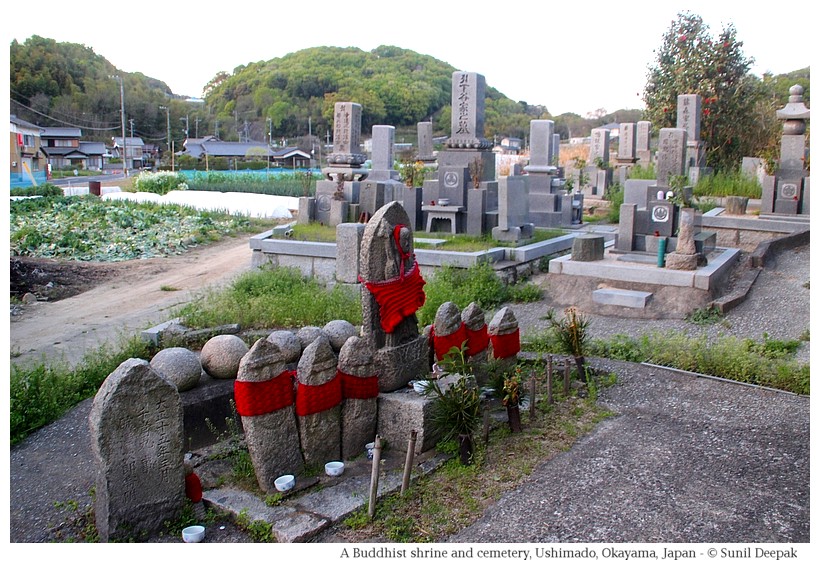 This shrine was close to a Buddhist cemetery with tombs scattered along the hill at different levels.

Today most cities of Japan look very European. However, Ushimodo has still many places where you can see the old Japan and its traditions. For example, the image below shows an old well of Ushimado and a couple of shrines close to it. 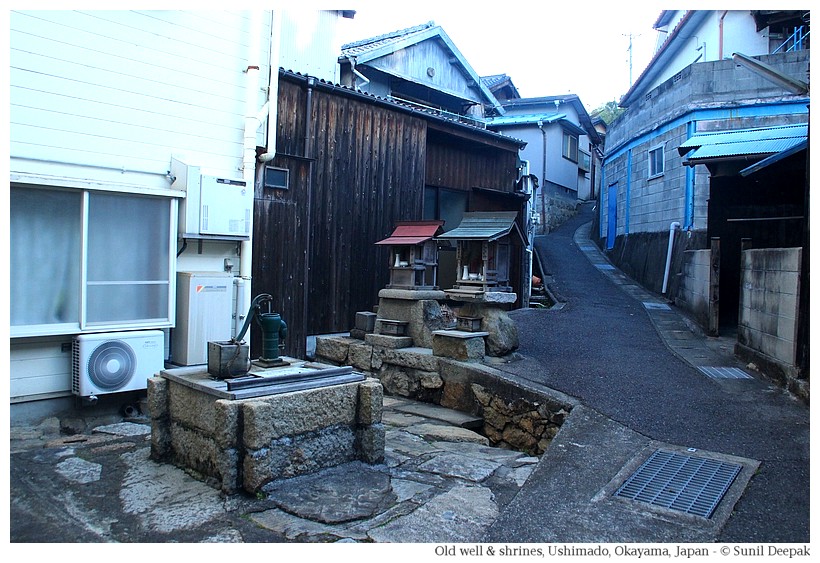 I want to conclude with another image from Limani hotel where I stayed. This image shows the hotel swimming pool with the sea just beyond it. 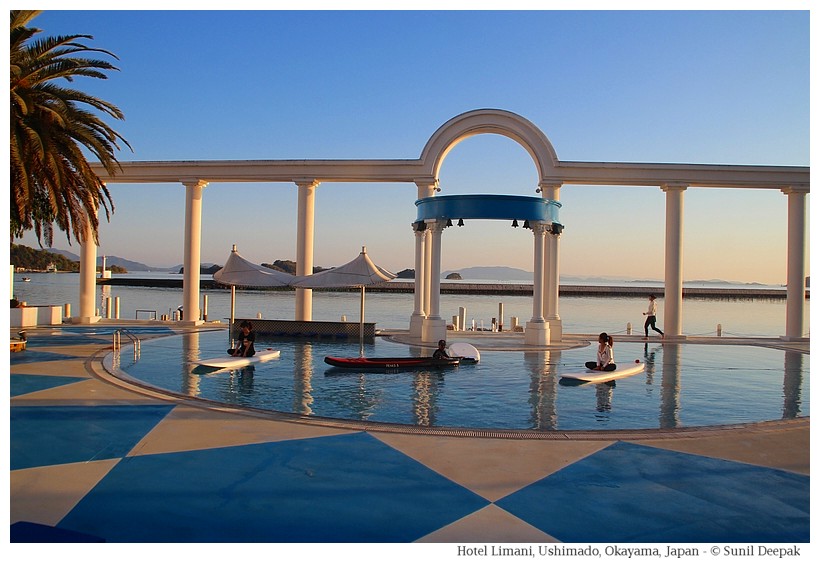 I was in Ushimado for a meeting on conservation of history of leprosy, invited by the Sasakawa Memorial Health Foundation.

I could not visit many tourist places in Ushimado such as the Kaiyu cultural museum, Maejima island (Green island) and the Olive Gardens. However, this visit gave me an opportunity to see and appreciate the traditional Japanese houses and some of their traditional temples and shrines. At the same time, it was a beautiful place with incredible sunsets.