Boat parade at the Venice Carnival

Venice Carnival is a ten days long celebration in which colourful costumes and masks play an important role. One of the first events of the Venice Carnival is the Boat Parade or the Water Parade (Corteo Acqueo). It is a fun event where people row boats wearing funny costumes, usually without any masks, like the lady shown in the image below. 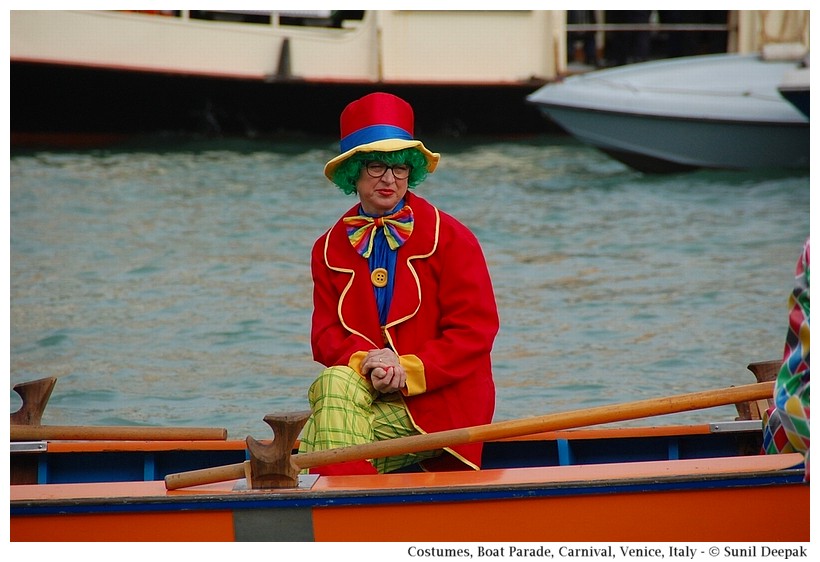 I love the refined elegance and colours of the medieval costumes in the Venice Carnival. However, during the last Carnival, I also wanted to experience the simpler joys of the Boat Parade. This post shares that experience.

Venice is full of canals. Grand Canal is one of the biggest. Almost 4 km long it starts near the most famous square of Venice, San Marco Square, and ends near the railway station and bus stand. The Boat Parade celebrates the Grand Canal. Only rowing boats can take part in it - no motor boats are allowed. 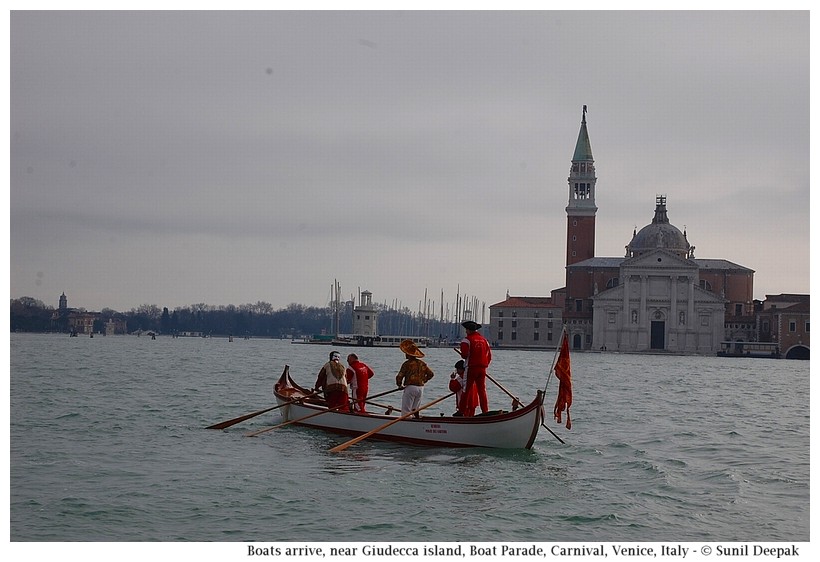 During this parade, boats start around noon from the San Marco end of Grand Canal. The starting point is called Punto Della Dogana (Custom point), across the canal from San Marco Square, marked by the beautiful Santa Maria della Vita church. Passing under the Academy bridge and Rialto bridge, the parade ends in Cannareggio, not very far from the Venice Railway station. At Canareggio, locals set up stands with traditional food and wine, and the parade ends with a long floating party.

My Experience of the Boat Parade

I took a train and reached Venice around 10 AM. From the railway station I turned right towards the famous three-bridges and to Santa Croce, and then along the smaller canal towards Santa Marta which hosts the Venice University (Ca' Foscari). It was along the small canal that I saw the first boats with people wearing costumes who were going to the parade. 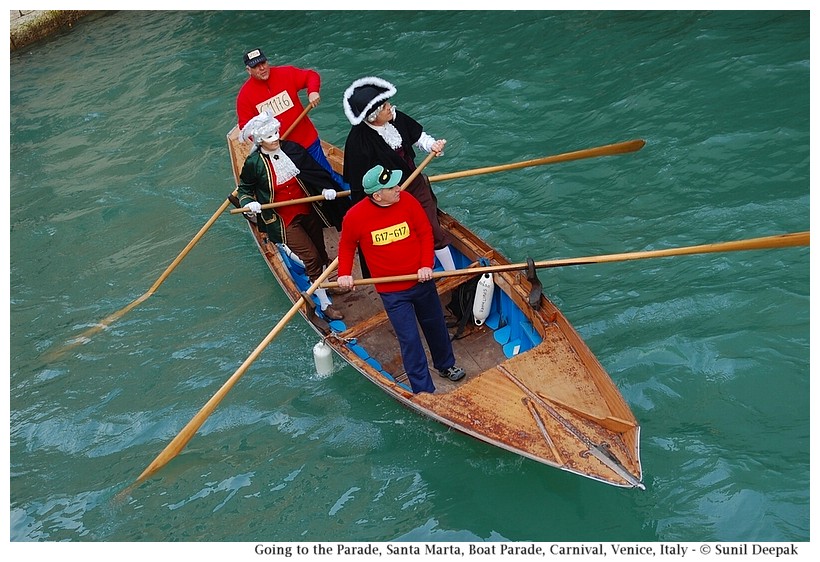 When I reached the big canal facing the Giudecca island, I followed the curve of Dorsoduro. Here I came across another group of persons, all dressed in pink jackets. They brought out their long boat for participating in the parade. It was a mixed group of persons, some young, some old and mostly women. 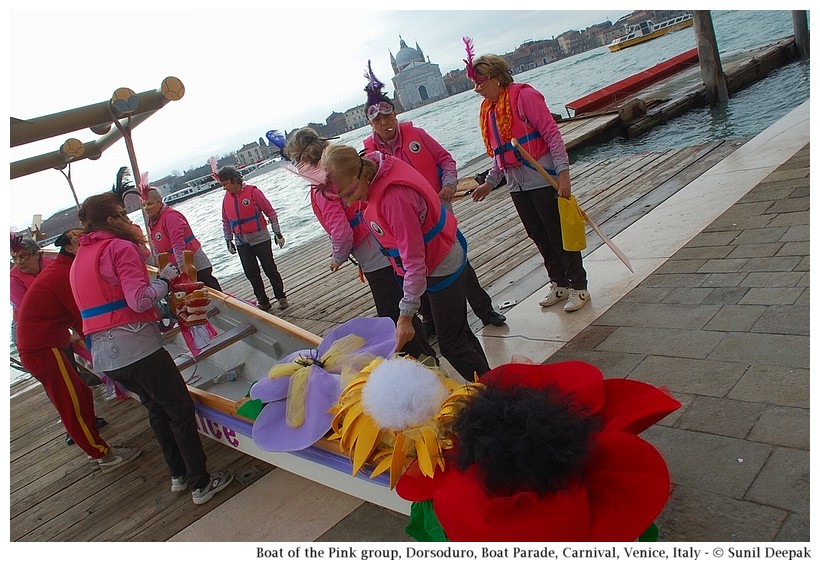 For participating in the parade, no registration is needed, you just need a rowing boat and some costumes. Traditionally each area of Venice and neighbouring towns have their teams for the parade. Usually these are persons who do not row boats normally, so they need to do some practice and get into form since it requires stamina. 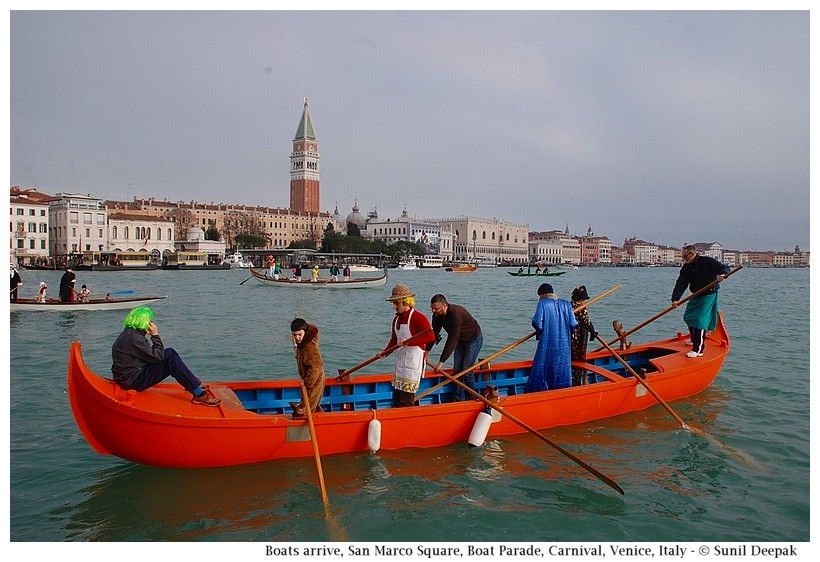 Soon after I reached the tip of Dorsoduro called Punto della Dogana. By that time it was almost 11 AM and I could see boats full of people with colourful costumes on both sides of Grand Canal. 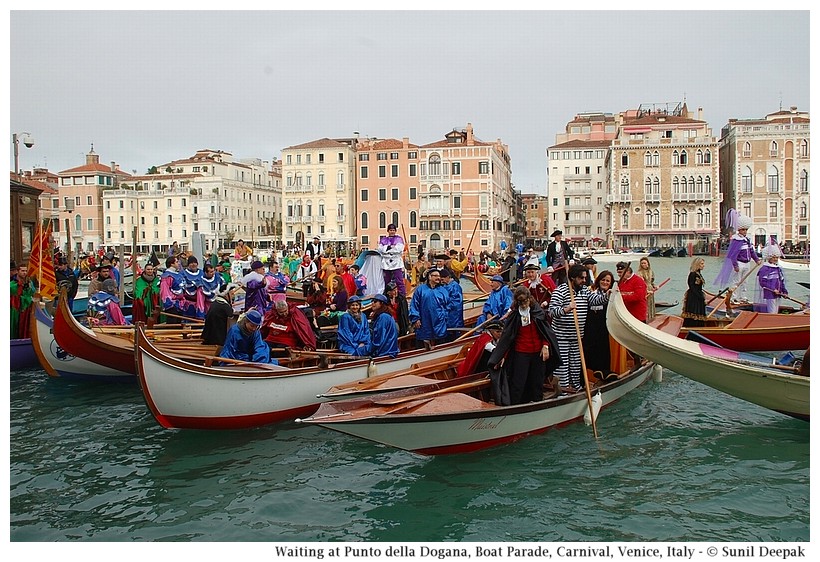 Many of the persons must have had their starting dose of wine or beer since they all seemed to be in high spirits. Their costumes were not elegant or refined. Many men, some of them with beards, were wearing women's clothes. Some were wearing mismatched costumes. Compared to the other days of the Venice carnival, when the emphasis is on exquisitely refined colour-coordinated medieval costumes, the ambiance was very different. 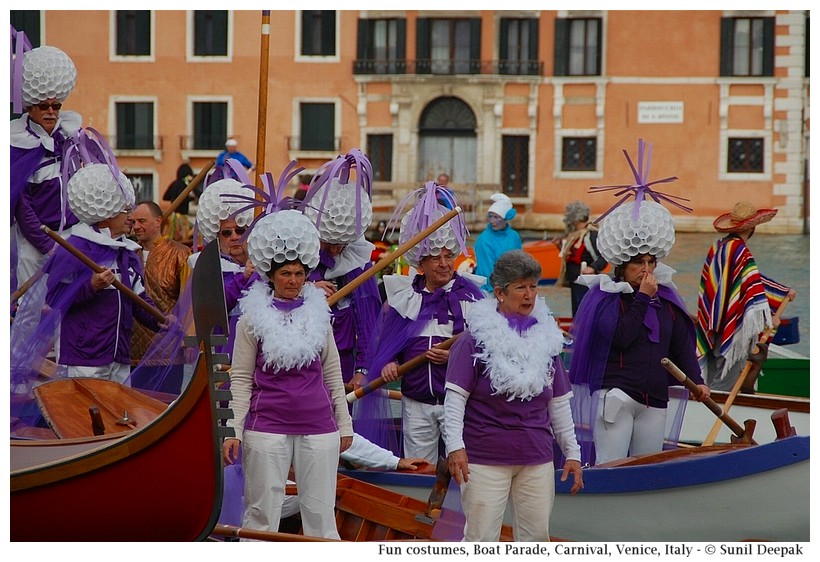 My original plan was to watch the boats getting ready for the parade and then walk to Academia bridge to click some pictures. However, as I walked towards this bridge, I could see that it was choked with people. Even the narrow streets around the bridge were overflowing with people. It was impossible to walk there. 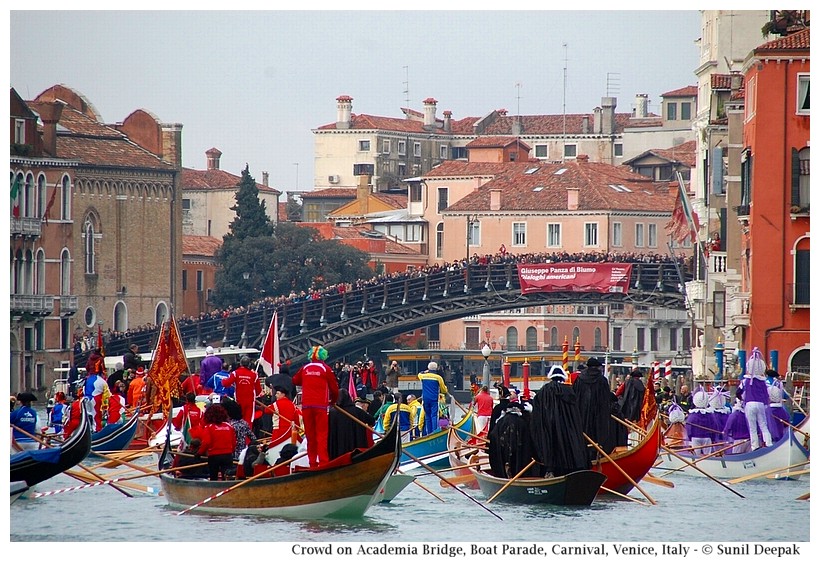 So I walked back towards the starting point to click pictures of the boats as they went towards the Academia bridge. It was very beautiful. 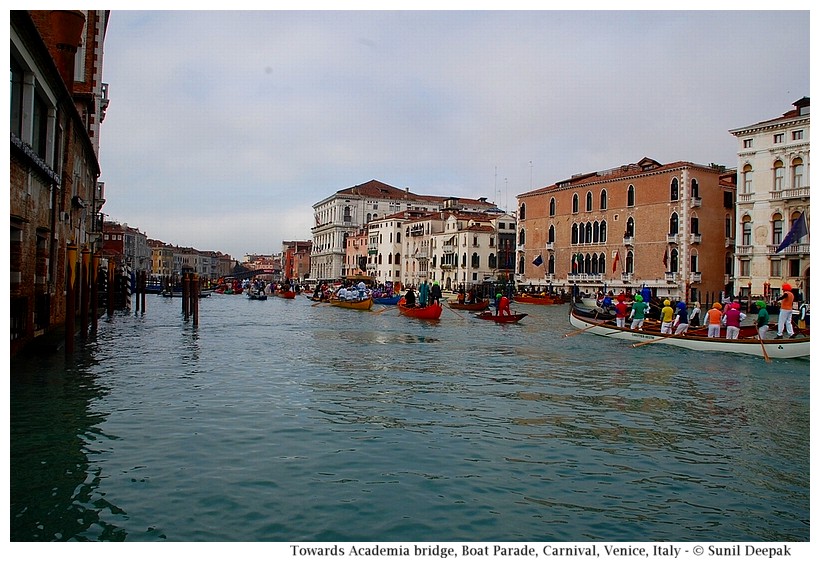 After the boats passed, I waited patiently till the crowds dispersed from the Academia bridge and I could cross the Grand Canal for walking towards Rialto and Cannareggio. Many of the persons who had come to watch the boat parade were also wearing colourful costumes (like the group in the image below). These costumes were more elaborate, they were not the fun costumes of the boat parade. Thus the walk back to Cannareggio was a lot of fun. 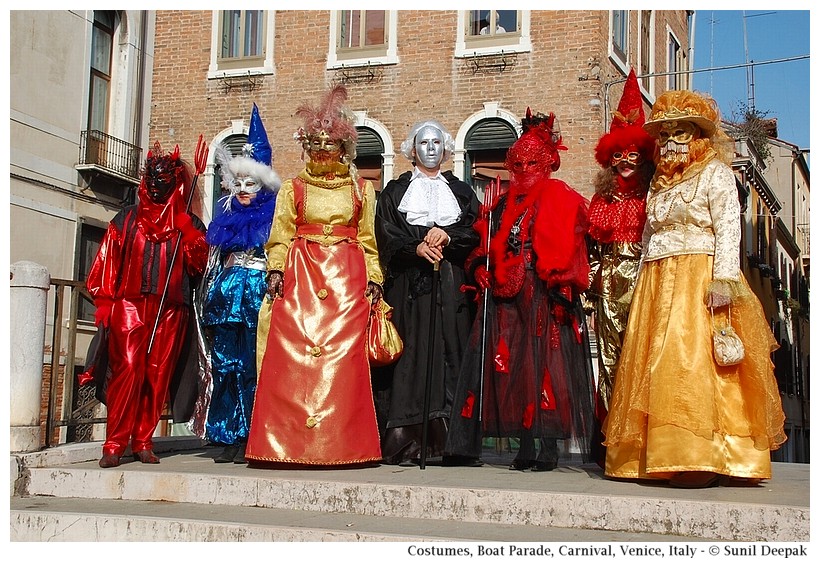 By the time I reached Cannareggio, it was almost 5 PM. Boats had already reached there, taken their fill of wine and food and then were slowly turning back to go home. 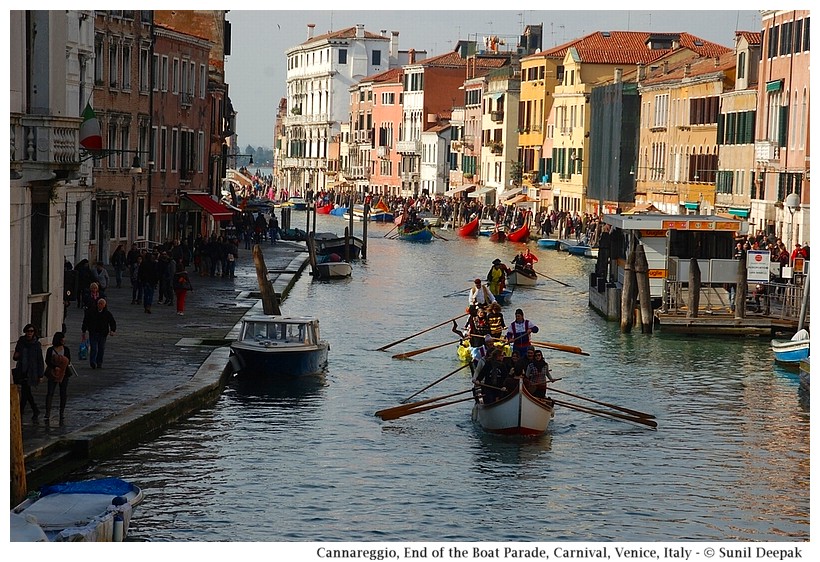 The image below has a boat going back from Cannareggio. 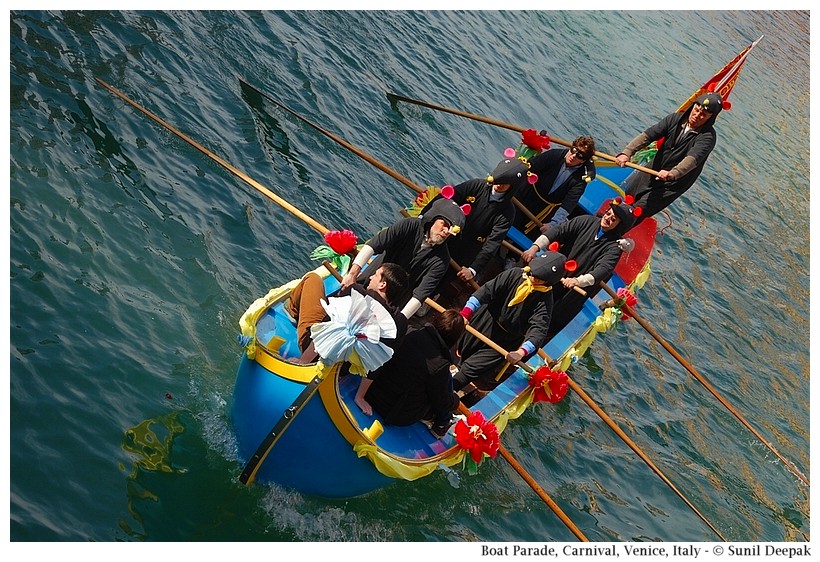 I loved the relaxed and fun ambiance of the Boat Parade. I found a place in a canalside caffe for a beer before going back to the railway station for my train.

My choice of going to Dorsoduro gave me an opportunity to spend a lot of time with boats and people as they were getting ready for the start of the parade. It was not very crowded and I really enjoyed this part of the day.

This choice meant that I could not see the boats passing under the bridges and the conclusion of the parade in Cannareggio. By the time I reached there, the parade was almost over. 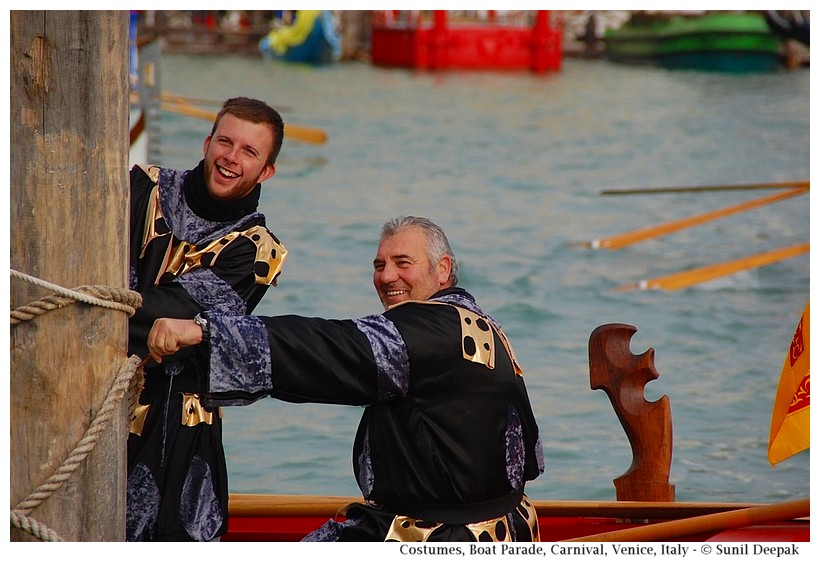 However I do not regret my choice. The alternative would have been to go early, find a good place on Academia bridge or Rialto bridge and wait for boats to pass underneath. Since the carnival attracts thousands of persons, you can't do everything, you can only do one thing. May be another time I will go early and stand at Rialto bridge to look at the boats as they come across the Grand Canal!