The beautiful fort of Orchha

Forts were built since ancient times as citadels to resist the enemy attacks. Inside, the forts were like small cities. They had royal palaces, temples, armories, treasuries, and also water supply systems and granaries to resist long sieges. Orchha fort from the 16th century India is a beautiful Jal Durg (fort surrounded by water). 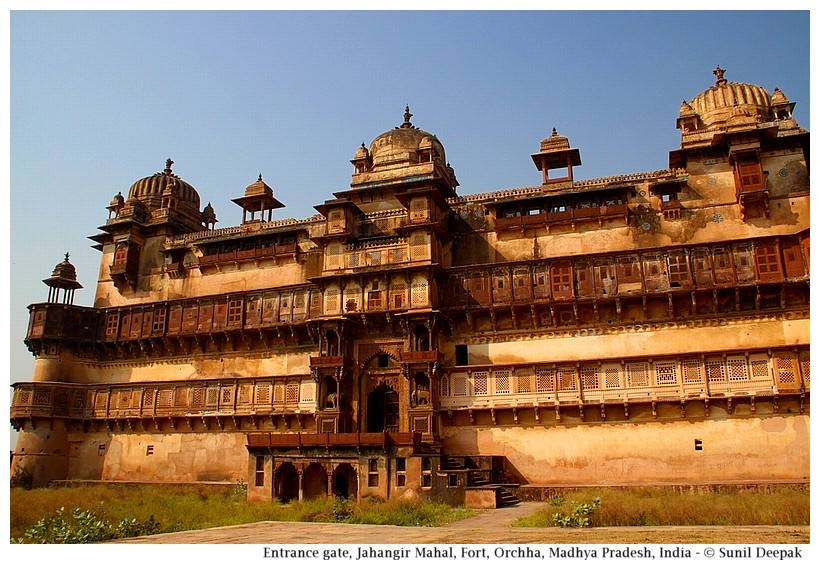 The Orchha fort has some of the most beautiful palaces, examples of the Bundeli architecture, amalgamating traditional Indic influeces with those from Mughal, Persian and Rajasthani styles. The image above shows the entrance of Jahangir Mahal in the Orchha fort.

Forts in Bundelkhand and Orchha

Bundelkhand is an ancient land. Since 7th century CE, the area was ruled by Chandels, initially under the Pratihara kings. They were succeeded by the Bundels. Though the region must have had more ancient forts, most of the existing forts date back to the Chandel and Bundel periods. 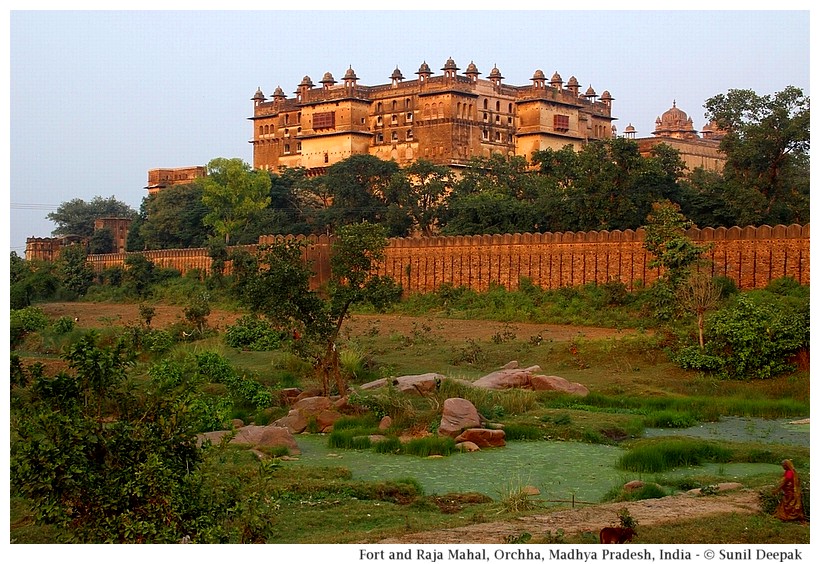 Orchha became the capital of Bundeli kingdom in 1530 when king Rudra Pratap started the construction of a Jal durg, close to the river Betwa (image above).

Construction of the Orchha fort

The first palaces for the king and the queen inside the Orchha fort were built between 1531 to 1539 under the reign of Bharati Chandra. This construction was continued by his brother Madhukar Shah. Many important constructions took place under Bir Singh Deo. For example, he was responsible for completing the Jahangiri Mahal.

The most significant construction after Bir Singh Deo was Sheesh Mahal (glass palace) adjoining Jahangir Mahal, which now hosts a hotel - it was built in 1763 under Udait Singh.

The fort is polygonal in shape with its longer side in the north-south axis. The moat separating it from the town was built by the deepening of Adhwar river, a tributary of Betwa river, which surrounds it from south-east. A terah-khamba (13 arches) bridge connects the fort to the city. Inside it has two main palaces - Raja Mahal and Jahangir Mahal, built along an east-west axis and many other imposing buildings. 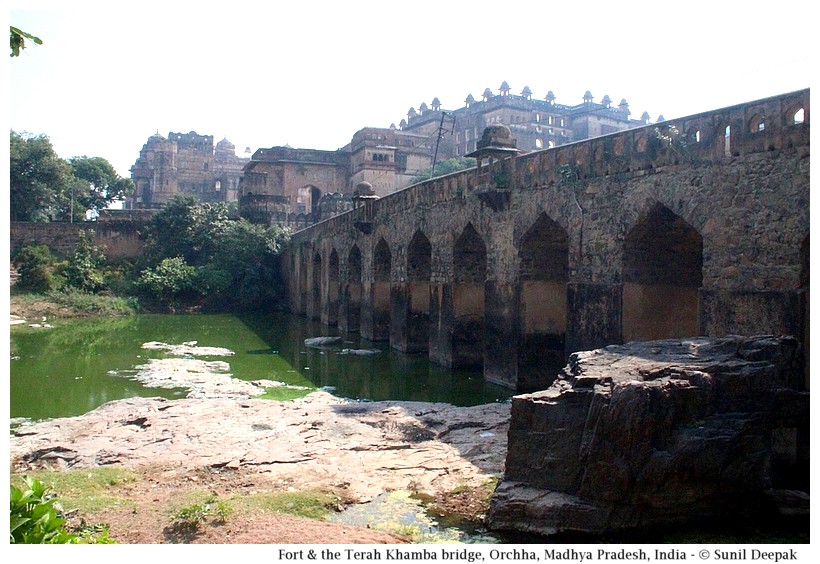 The main gate, known as Kanteela Darwaza (Thorny gate), makes a sharp turns first to the right and then to the left, before it leads to the entrance gate of Raja Mahal. The sharp turns of the passage were built to slow down the entry of the invading enemy. A second passage, to the left after the main gate, leads directly to the main entrance of Jahangiri Palace at the back. 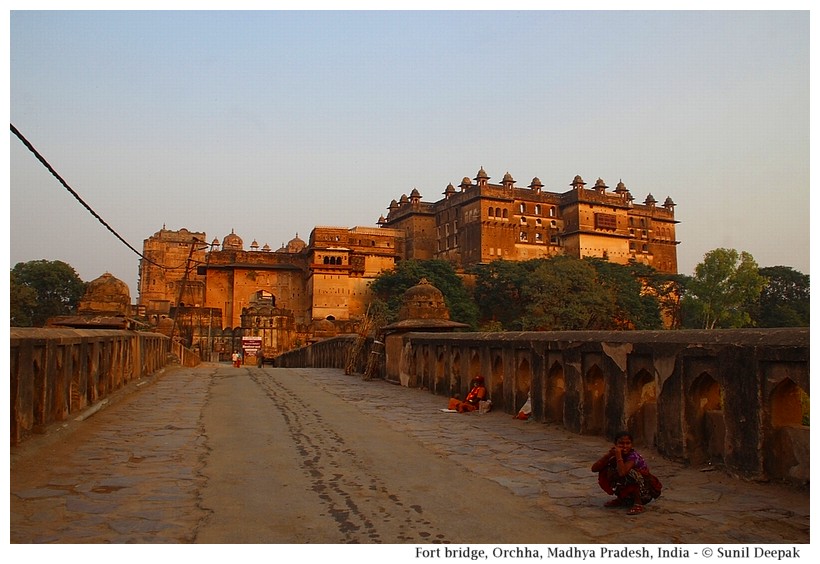 This palace has three main parts (1) the 3-storied entrance gate (Northern entrance) leads to the Deewane-Aam (Hall of public audience); (2) behind the public court, there is a multi-storey building that includes Deewane Khas (hall of private audience) and (3) the residential part of the palace (shown in the map below). 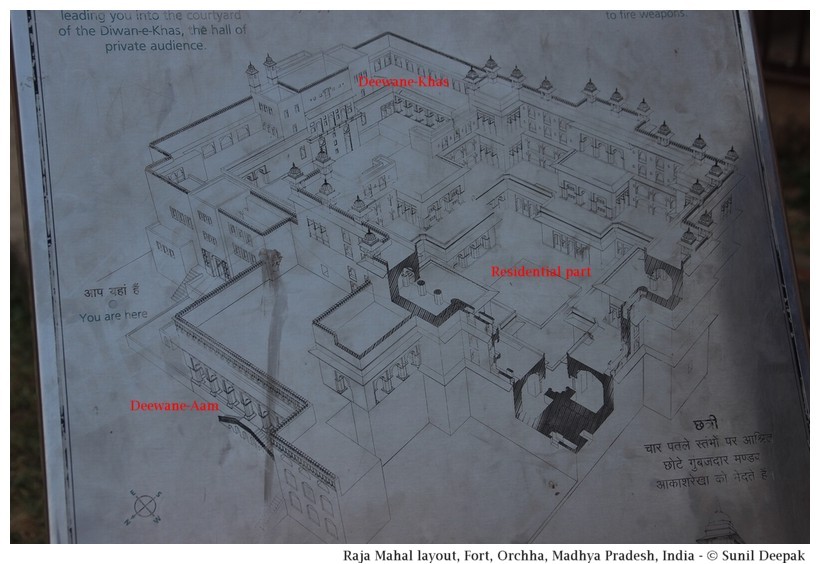 Deewane-Aam is built on a platform, with three parallel pillard halls and is open on two sides. An elegant, two-sided staircase with a wrought-iron balustrade leads to the halls. 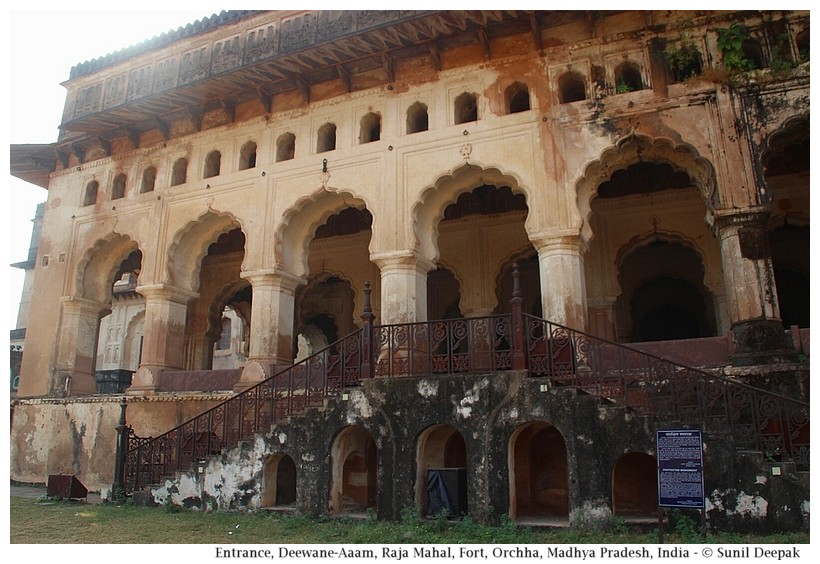 Steps separate the three halls. The third and the inner most hall is raised on a platform for the sitting of the nobles along with a second higher platform at the eastern end for the king, as shown in the image below. 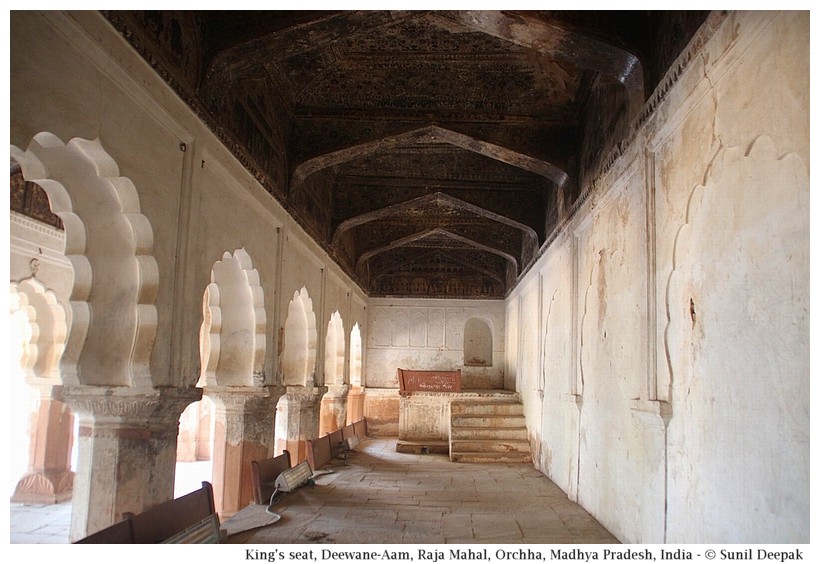 All the walls and roofs of this building are decorated with wall paintings. The two common themes in the wall paintings are religious (mostly Krishna with gopis and cows) and nature (mostly water birds and fighting or hunting eagles). 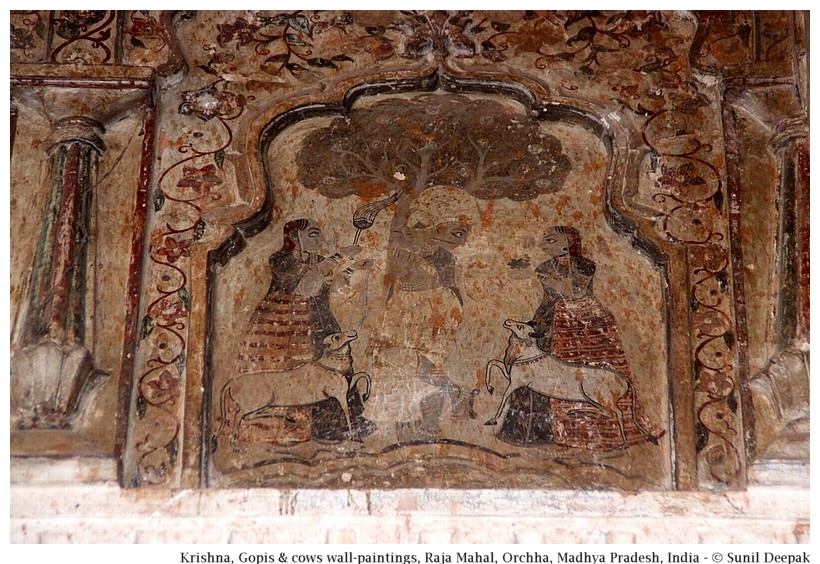 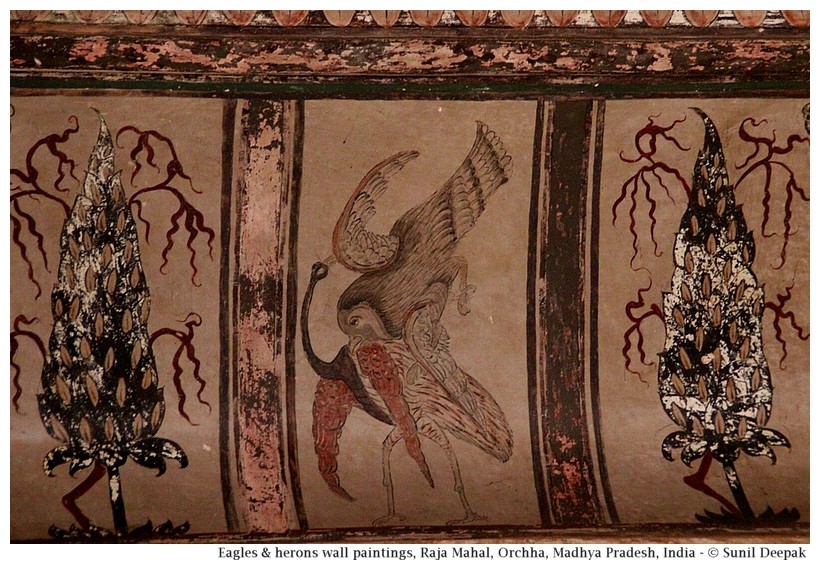 There is a Shiva temple in front of the Deewane-Aam, behind which you can see the Sheesh Mahal (Glass palace) which was built two centuries later. 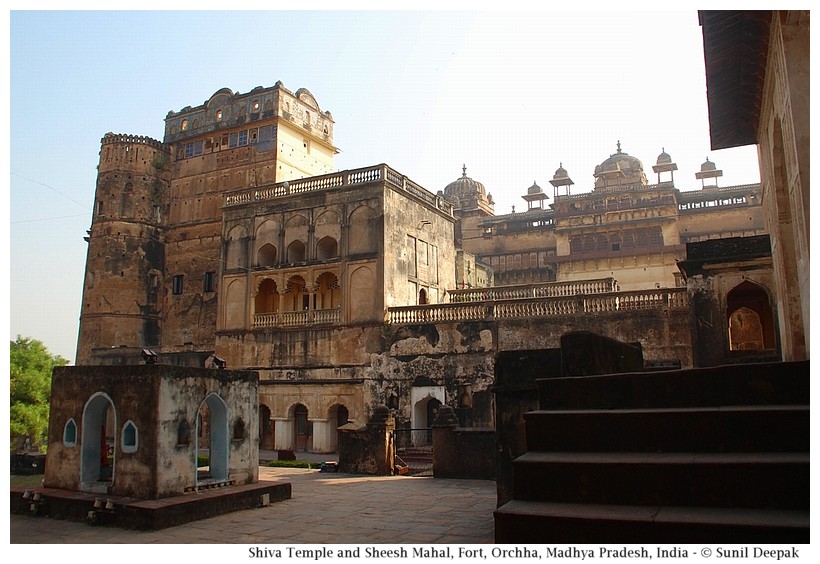 Behind Deewane-Aam is the eastern gate of the palace leading to Deewane-Khas (Hall of private audience). This hall is actually an open courtyard with the king's terrace in front and two raised platforms on the north and south ends for the nobles. Arched entrances from Deewane Khas lead to the inner residential part of the palace which has a central square-shaped courtyard and a small raised platform at its centre. In the middle of each of the four sides around the courtyard, on the first floor, there are four heavily decorated rooms along with jutting terraces. On the third floor, there is a second level of four terraces. From the terraces you can have a good view of the other terraces, as well as of the central courtyard below. 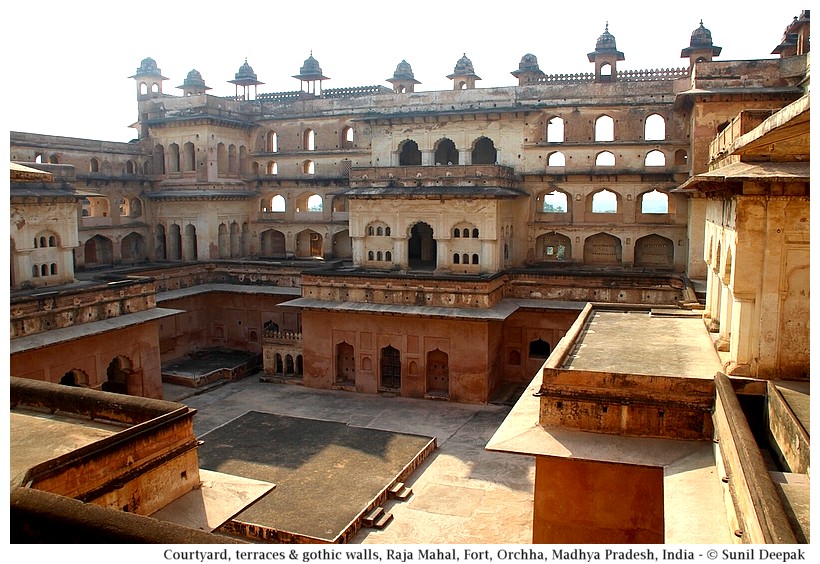 All around the palace, there are arched open window-spaces resembling the Gothic style of architecture that was common in Europe in this period. This palace is supposed to have many secret passages. It was inhabited till 1783. 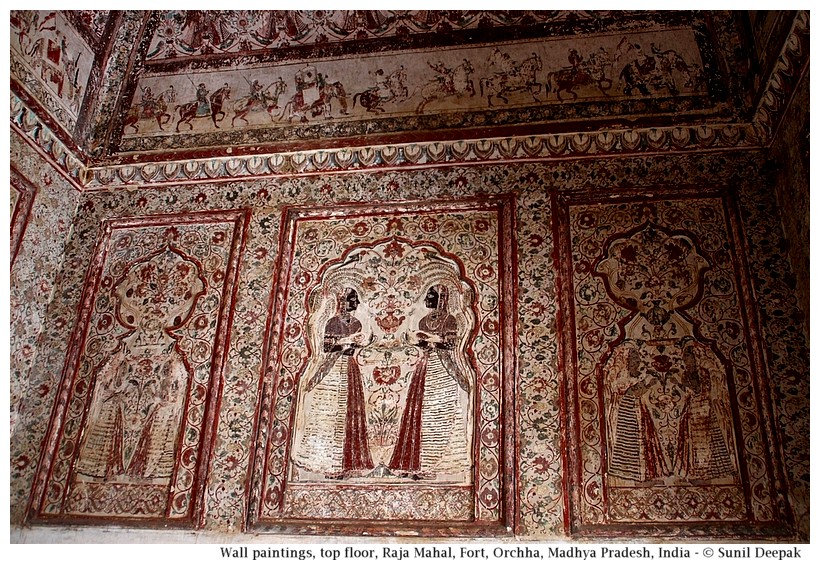 The construction of this palace was started in late 15th century under the reign of Rama Shah and Indramani Singh. It was completed in 1606 under king Bir Singh Deo. He gave it the name of Jahangir Mahal to honour his friend and ally Mughal emperor Jahangir, who had destituted Rama Shah and made Bir Singh the king of Orchha. The palace has 136 rooms.

It is a three-storied square shaped building with bastions at the corners, very similar to the residential part of Raja Mahal in its architecture but with greater embellishments. It has a square shaped central courtyard with 5 fountains in the centre. The first floor has beautifully decorated rooms in the middle of the four sides along with terraces from where you can look down at the courtyard. Just like Raja Mahal, the second storey also has slightly receding terraces in the middle on the four sides. 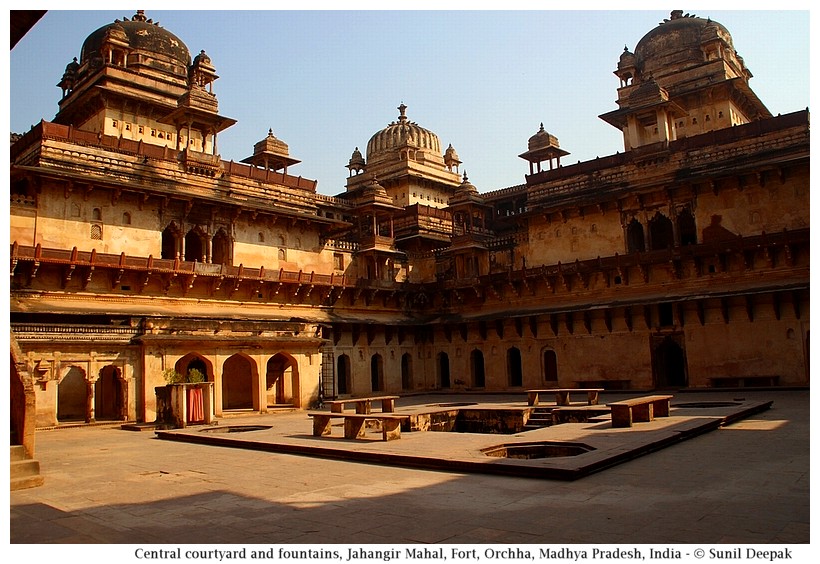 It has more carvings, sculptures and chhattris compared to the Raja Mahal. For example, underneath the terraces, there are stone elephants supporting them. 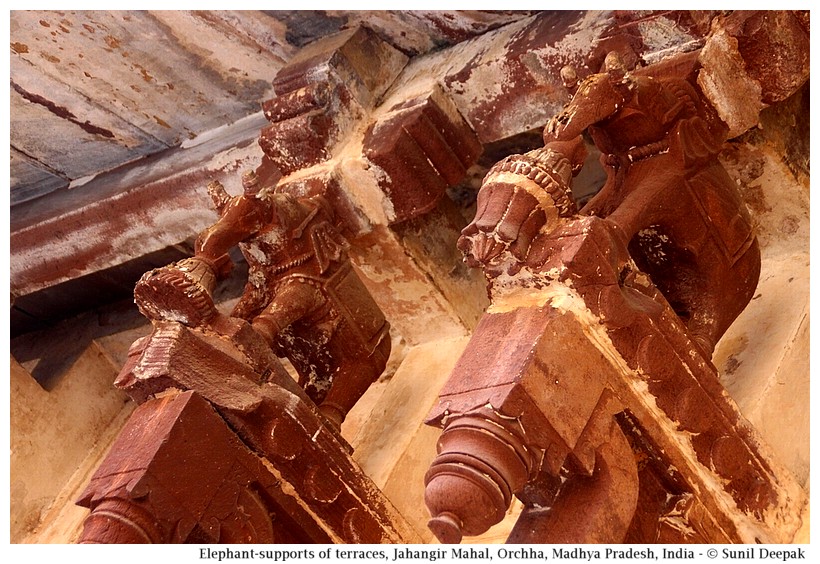 One important difference from Raja Mahal is the staircase that leads up to the western terrace from the central courtyard. The doors are also heavily carved. For example, the door leading to the western entrance has carvings of inverted kalash and elephants on it. 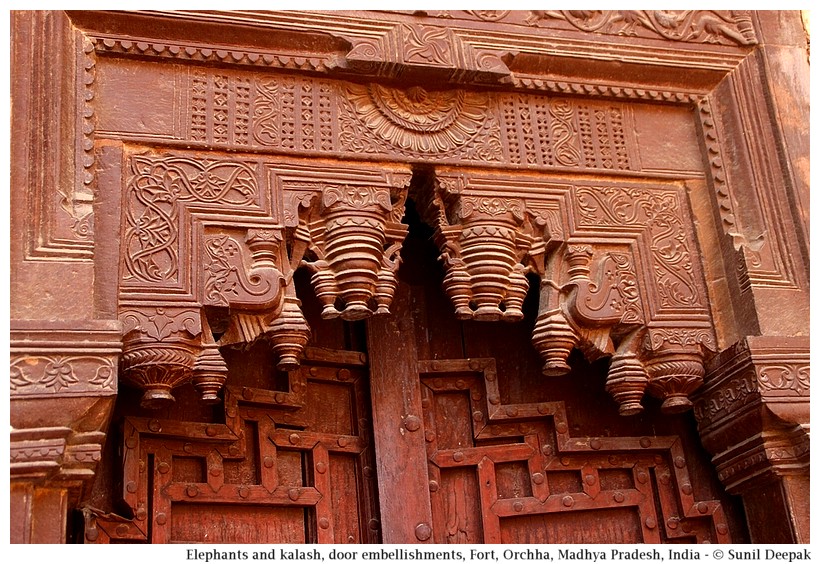 Another example of embellishments in this building are the groups of smaller and bigger chhattris, that were decorated with blue coloured tiles. The ribbed central domes of the bigger chhattris are similar to those at Hampi in south India. Octagonal domes (chhattris) and the figures of lotuses and elephants abound in the construction.

The southern end of the palace has an imposing and majestic main entrance gate with carvings of elephants on the two sides. This is a five-storied structure, a chhajja marking each storey. 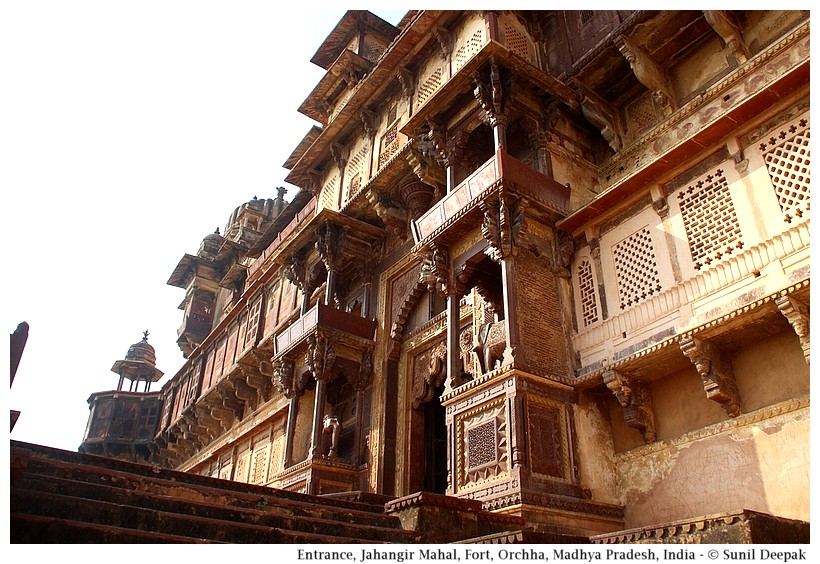 Its construction have traditional Indic elements such as trabeated entrance doors with horizontal beams. At the same time, Mughal and Persian influences can also be seen, for example in the arcuate structures, specially inside the building. These are amalgamated into Rajasthani architecture, giving rise to the Bundela style. However it lacks the surrounding walls with numerous arched windows inspired from European Gothic architecture that can be seen in the Raja Mahal.

Hamam khana adjoining Jahangir Mahal was also built in 1606. It is made like a Persian hammam (bath house) with a decorated water pool. The roof of this building has a water reservoir. 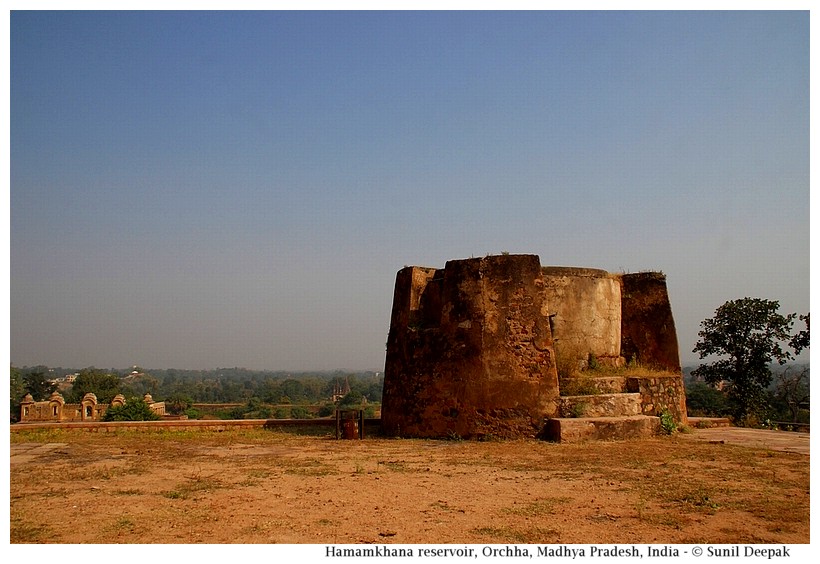 This palace was built during the care-taker reign of Indrajit Singh in late 16th and early 17th century, while his brother Rama Shah stayed at the court of emperor Akbar. You can read more about the beautiful courtesan Praveen Rai and her love story with the king in my post about legends of Orchha. 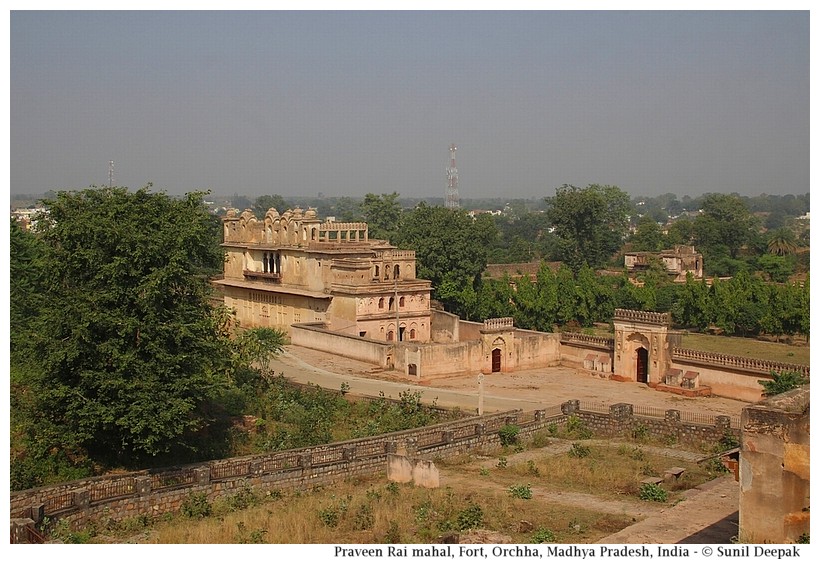 This square shaped building is located to the east of Jahangir Mahal. It is located on a raised area. Originally it was a baradari built in 16th century but in late 17th century a raised corridor was built all around it with arched gates on each side. 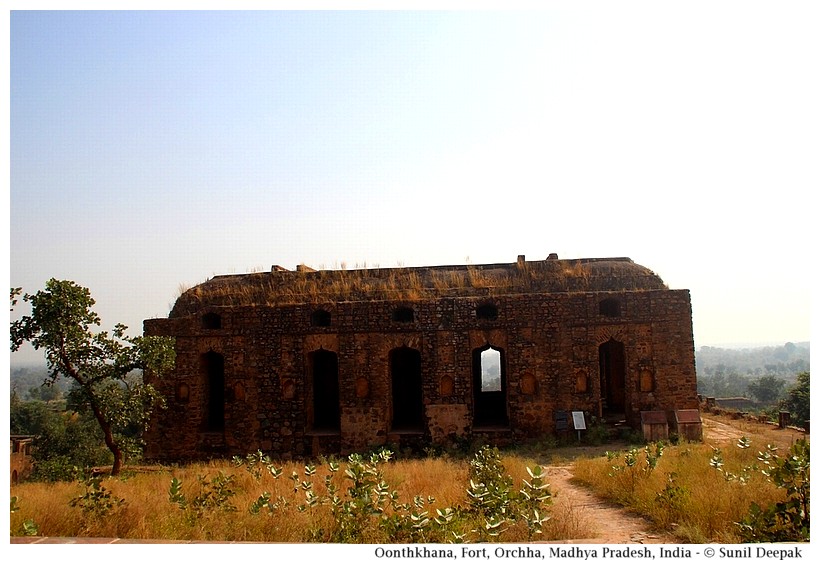 Its name suggests that it was a stable for camels. From outside the building looks plain but it is decorated from inside. The rings on its roofs suggest that swings were fixed there. Thus, many persons believe that originally it was a pleasure pavillion from where the royals could relax and look at the Betwa river and surrounding forest while enjoying the breeze on the swings.

Temples, gardens and noble houses inside the fort

During the reign of Bir Singh Deo, many local nobles and royal associates had built their kothis and havelis (villas and big houses) inside the fort including those of Balwant Daua, Champat Rai, Bakasrai Pradhan and the poet Keshav Rai. These buildings (Dauji's kothi, Himma Hamir kothi, Fasiyane ki Kothi) are in ruins. If you do not have the time to go out and explore the grounds of Orchha fort, these can also be seen from the windows of the Jahangir Mahal. 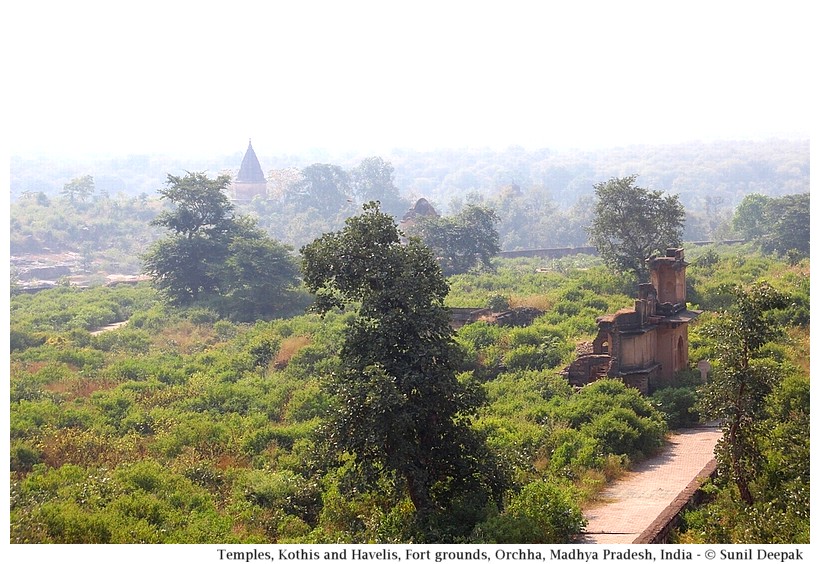 There are also many temples inside the fort such as the Vanvasi Ram temple near the Oonth khana. The fort also had many gardens.

For lack of time, I did not visit the vast grounds of the fort, that are covered with trees and plants and paths leading to the river. Ruins of noble houses and old temples dot the whole area. For the archaeology enthusiasts, this area offers hours and days of exploration and discoveries.

Orchha fort with its beautiful palaces and rich history requires many days for a proper exploration of all its wonders. Even in the one morning that I spent there, I came back with wonderful memories of its beautiful courtyards, wall paintings, symmetries of delicate terraces and chhattris. 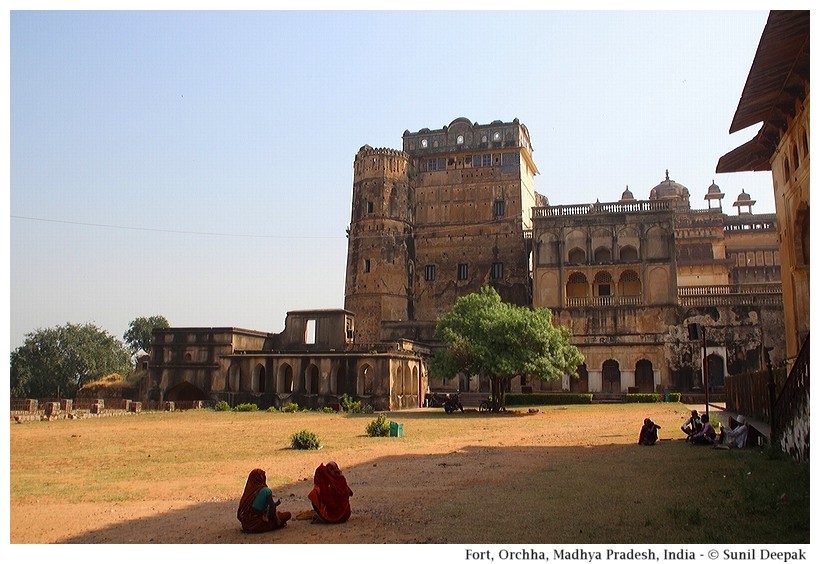 The fort is also linked with different legends about which I had written in another post. If you want to know more about Orchha, you may also check my following posts on this theme:

(1) Exploring the many splendours of Bundelkhand

(2) Discovering the beautiful architecture of Orchha

(3) Legends and stories of Orchha