Pink Boy and Tom Girl, the world of fluid genders

When BJ, his great aunt and adopted mother, asks Jeffery, "What would you like to be when you grow up?", he thinks hard and says, "I think that I want to be a girl." BJ, her companion Sherrie and the boy Jeffery, are part of a short film on gender fluid children called "Pink Boy". 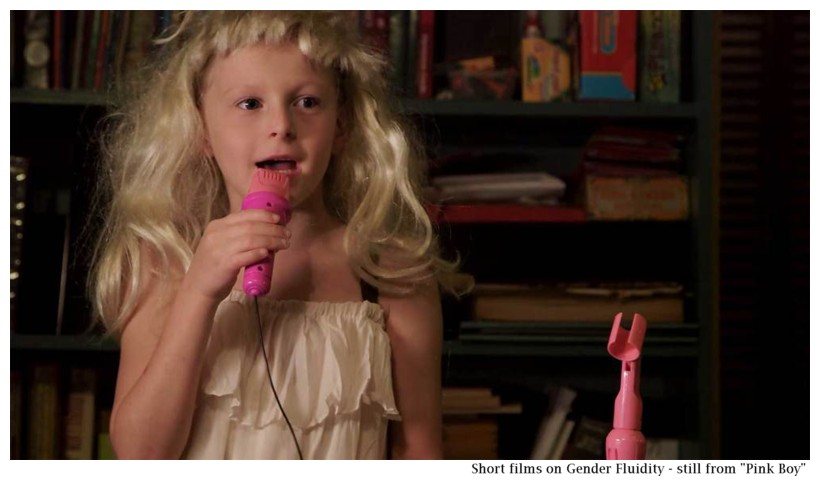 This post is about some short films on gender fluidity, about persons who are not sure about their genders. You can look at it as a kind of free film festival on gender fluidity - all the films mentioned here can be watched free on YouTube.

However, sometimes, the bodies and feelings do not match. Thus, a child with male body may feel that he is a girl and a child with female body may feel that she is a boy. Often during childhood, such feelings can be fluid, in the sense that these feelings are not fixed, and they can change. For example, some children born as boys, who may have thought of themselves as girls for a certain period, as they grow up, finally decide that they prefer to be boys, while others decide that they are girls. Some can even decide that they would prefer to be some times girls and some times boys or none of the two.

These children (persons) who are not sure about their gender are called "gender fluid".

We human beings are incredibly complex and some of us do not fit into any label. My explanations about gender fluidity are only a simplified version of this complex reality.

It is short film (15 minutes, 2016) directed by Eric Rockey. It looks at the challenges faced by a lesbian couple in raising up a gender-fluid boy. The film is told mostly from the point of view of BJ, a masculine lesbian woman. Jefferey was the son of her niece and she had adopted him when he was 2 months old.

BJ explains her initial difficulties in accepting that Jeffery wanted to dress like a princess and to play with barbie dolls. Then she decides to provide acceptance and support to Jeffery, in whatever decisions he is going to make about his gender identity. Aware that he would have to face bullies, discrimination and violence, she decides to enroll him in a martial arts training so that he can defend himself.

"Tom Girl" (14 minutes, 2016) is by director Jeremy Asher Lynch. It is about a seven year old boy called Jake. It has his mother and father, as well as some other persons from his life, including a psychologist, talking about what it means to have a gender fluid child and how important it is to accept the child as he is. Jake himself is incredibly clear about what this means for him. 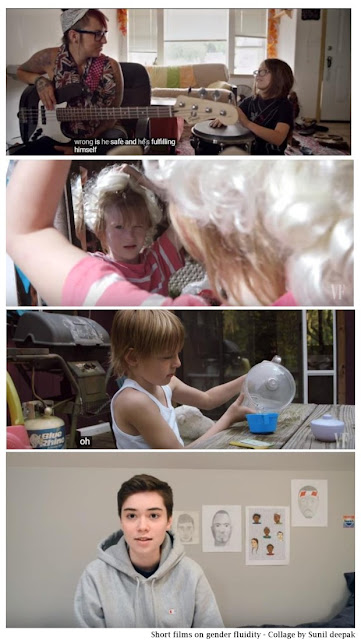 In the film, at one point, Jake's mother says that probably there are many other children like Jake, but we as society force them into specific gender roles.

I think that our process of guiding our children towards specific gender roles starts very early and in unconscious ways. When a one year old son is taken to a shop and if he points to a doll or a pink cap, his mother or father, just shake their heads and instead nudge him to another kind of toy - that boy is already learning that he is not supposed to like dolls or pink caps.

However, having said that, I do not think that all stereotypical ideas about male and female preferences are only a result of cultural influences, at least some of them of them are in-born.

Short film 3: It is a stereotypical day

The 4 minutes long film (2015) by Alex Harrison can be a good introduction to understanding your feelings about some of the issues surrounding gender fluidity.

The film is about 3 mornings. On the first morning, the adolescent hero wakes up, goes out and meets some people on the way to school. On the next day, he sees the same persons but some switch has been flipped and people are behaving contrary to their expected gender roles. On the third day ... you can watch it on YouTube to find out the surprise ending.

Short film 4: I am Oliver

The 4 minutes long film by Moustache Geek (2015) is about being a transgender teenager. The film looks at the life of an adolescent facing problems in school, her desire to be boy and the sympathy s/he gets from a classmate. All these things are shown through the role played by social networks and internet in our lives. The film is a personal testimony.

The 11 minutes long film by Just Sammy (2016) is about a transgender boy and his journey to accept himself. The film starts with Sammy dressing up as a girl, putting make-up, and not feeling happy about it. She does not want to be a girl. She considers cutting the vein in her wrist and committing suicide. Her family has not been supportive and has asked her to not to talk about her desire to be a boy.

Instead, Sammy decides that he is a boy and to live like a boy. He uses an elastic wrap around his breasts to hide them and puts a sock in his pants to camouflage genitals. He talks about his daily struggles with his peers, and his fears and desires about his gender identity. This film is also a personal testimony.

The 10 minutes long film by Isaac Eli (2017) is a wonderful film to get a glimpse into the lives of transgender boys/men (persons born as girls who feel that they are male). It is also a personal testimony.

It is a simple film - just Isaac sitting in front of the camera and talking about his problems, like what it means for him to have monthly periods; the difficulties of using public bathrooms and how he wishes for gender-neutral bathrooms (which can be used both by men and women); the difficulties of going to a swimming pool and not being able to go open chested like other boys; the love/hate relationship with binders to hide his breasts; the endless waiting for everything from top-surgery (to remove breasts) to the treatment with testosterone; and his disgust when someone talks to him as if he is a girl or is talked about with a female pronoun.

I liked this video very much. Compared to the other films, this film made me think of so many different ways our genders influence everything we do in life and how that can create challenges for persons like Isaac. I also liked it because Isaac has a very nice dog and I love dogs!

I hope that you will watch the films I have included in this list. If you do, please make constructive and supportive comments under each of these videos. To be an adolescent is tough, to be an adolescent who does not fit and conform, can be heart-breakingly tough.

Persons with gender fluidity issues have high rates of depression, suicides, alcoholism and substance abuse. Often they face rejections from their natural and adopted families. They also face a lot of emotional, physical and sexual violence. If you are a parent or a relative or a friend of a person who does not conform to his/her gender, be accepting, be loving and be supportive. They will have to fight the world for a life with dignity, at least make sure that they don't have to fight their families as well.

You can also read more about this issue. For example, the Gender Spectrum website has lot of good advice and information for parents and families on this subject. 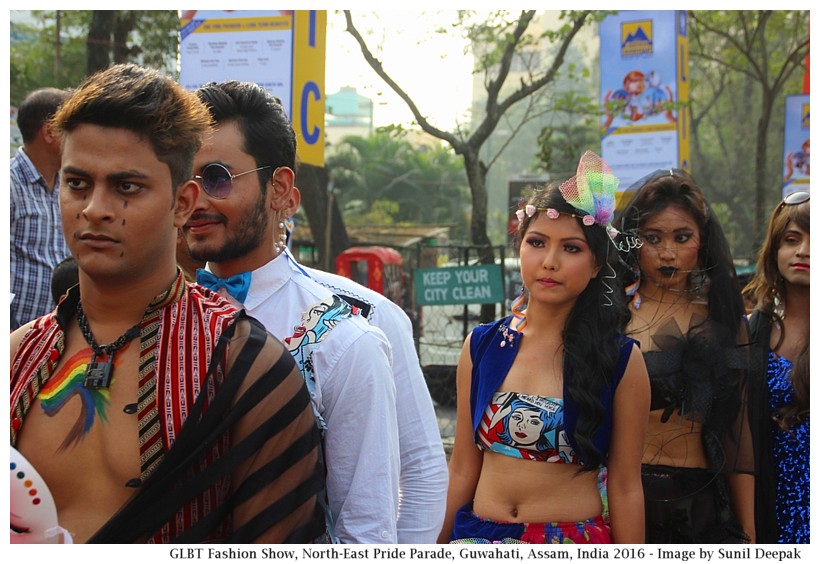 All the films mentioned in this post are from Europe and USA. I looked for similar films from India, Asia and Africa but did not find any. Perhaps there are but they are in other languages! If you are aware of any good short films on this theme that are available on YouTube, please tell about them in the comments below.

For a long long time, in the developing world it was difficult to get any information about trans issues. Now, thankfully technology is changing the situation and hopefully more persons will be able to share personal testimonies, find strength in sharing their stories and experiences with others and build supportive virtual communities that can one day spill over in the real world.