The well known american writer, known mainly for his legal thrillers, John Grisham was in Bologna yesterday, to receive a special award from the mayor of the city. The function was organised in Santa Lucia hall of the Bologna university. The thousand years old hall, that looks like the dining hall from the Harry Potter films, was an ex-old church.

It must have been a rare experience for Grisham to be surrounded by accademics, including the dean of university and a professor of American literature, talking about his "writings". Even if his books have sold 200 million copies around the world, including 10 million books in Italy, no one pretends that he writes "literature". I don't think often people take his name next to Mark Twain or Charles Dickens like it happened in Bologna!

His new book, "The Broker" is based in Bologna. It is the first time Grisham has come out of the American counties, placing his book outside America. He explained that he needed a small, not too touristy town, where his spy hero could hide and the decision to make him come to Bologna was just by chance. He came here for the first time in July 2004 to look for places where his novel will be based, and fell in love with the city, its people and the food.

It must be admitted though that Grisham was suitably modest and ironical in a self-deprecating manner. "I was the best selling author in the world", he said, "till Harry Potter came along." He was asked if the fact that most of his books are turned into films, has affected the way he writes his novels now, he answered, "My writing was always simple, straight forward, one scene leading to next, no complexity, that is very similar to films. I haven't changed that. When I start writing, I already know what is going to happen in my book, from beginning to the end."

About the movies based on his books he said that not all the movies are good and he can't have the control over those movies, at least not as much as he would like. He also mentioned about the screenplay he had written about a minor league of basball (he is passionate about baseball) and when he did not find any producer, he produced it himself. "This film was never released properly in USA nor in the world, no body ever saw it", he said, "it came out in DVD and no body is buying the DVDs. It was a foolish decision."

He did not seem very enthusiastic about Mr. Bush and lamented the increasingly shrinking space for freedom of expression in America. While he was speaking, thunder broke out and he gave a start and then laughed saying that ever since Katerina in New Orleans, he is worried about thunderstorms.

In the pictures below, you can also see the Mayor of Bologna, Mr. Cofferati, giving the special recognition award to John Grishem for basing his new book, "The Broker" in Bologna. 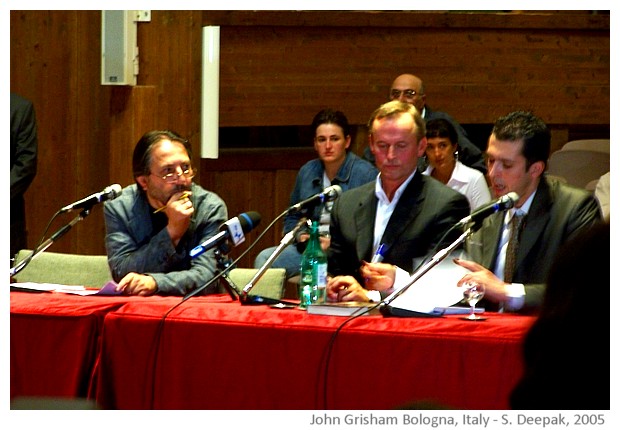 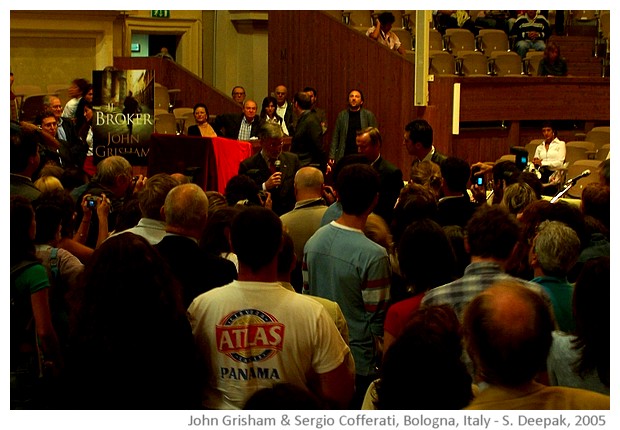 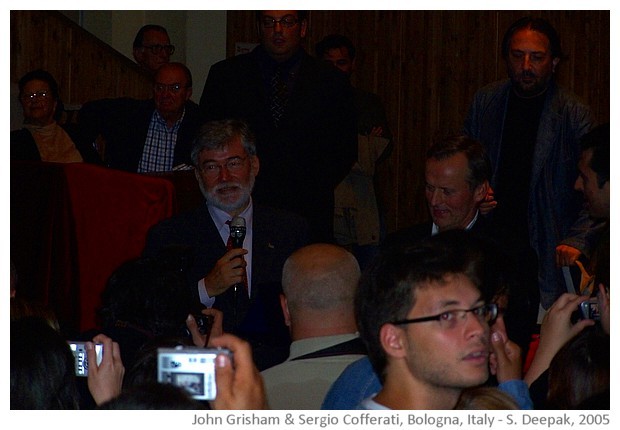