Once again, I was back in London. Travelling up and down the city in the tube. Saw an ad sticking on the tube wall about "Paternity testing", advising women that if they had any concerns about the paternity of their child, DNA testing is now possible to identify the father. For a company to put an ad of this kind and to invest money on it, it means that there is indeed a market for it and sufficient number of women (and men) are interested in finding out if the child is indeed of that particular man. Seems like a commentary on these times!

I can bet, that such an Ad would never be accepted in India. Anyone stupid enough to put such an ad in a public place, is likely to be prosecuted for corrupting the impressionable public, if not already lynched by angry mobs. In India, we don't have adultery, do we? Or worse, women having multiple partners. It is against our culture!

***
In London, they have this nice initiative of putting up poems in the tube. Read a lovely poem by Chamon Hardi there.

I can hear them talking, my children.
Fluent English and broken Kurdish.

And whenever I disagree with them
they will comfort each other by saying
Don't worry about mum, she's kurdish

Will I be the foreigner in my own home.

***
In the tube, I saw a man, white and very English, wearing a jacket with a lotus designed on it's pocket, underneath it was written PUNJAB. On both the sleeves of the jacket, there were stripes of the Indian flag. Probably he did not know what the colours of those stripes meant? Indian made jackets are nicer and cheaper. Boys in Punjab, stop asking friends to bring you the jacket from UK, get it from Ludhiana!

***
In Europe, only in London, you can get away by carrying an Indian take-away dinner. It's smell is so strong. Yet, no one looks at you in London. The curry restaurents are so common and so full. Found a new Sagar with only vegetarian food including nice dosas on King's street. Yet even this was full - I had to wait to get a table.

Here in Italy, neighbours complain about the strong smells coming from Asian kitchens. May be they need to eat more curries and get used to them!


I was pushing my camera in through the railing around Buckingham palace to click the picture of the royal guards, when I saw this policeman point at me. Perhaps, he thought that my camera was a gun? Then he walked towards me. I was so tempted to put away my camera and walk away but I forced myself to stand there and continue clicking. He came closer in front of me, bent down and picked a green-coloured paper wrapped around the bottom of the railing, went back to the guard and smilingly put it in his pocket. The guard did not move. Perhaps, it was a message from guard's girl-friend and the policeman was only playing cupid! 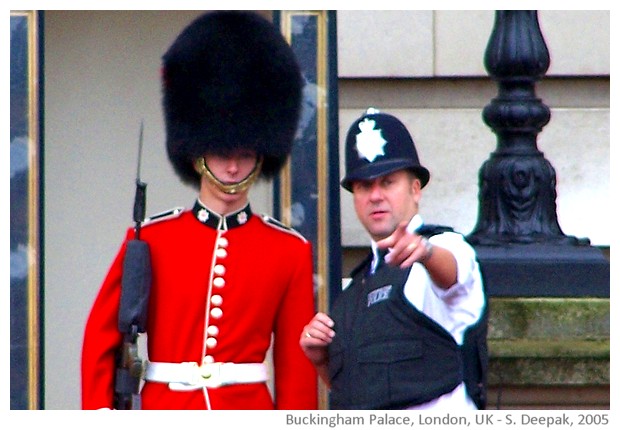 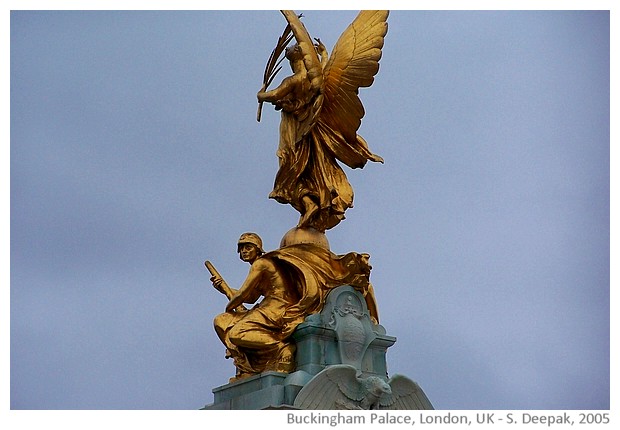 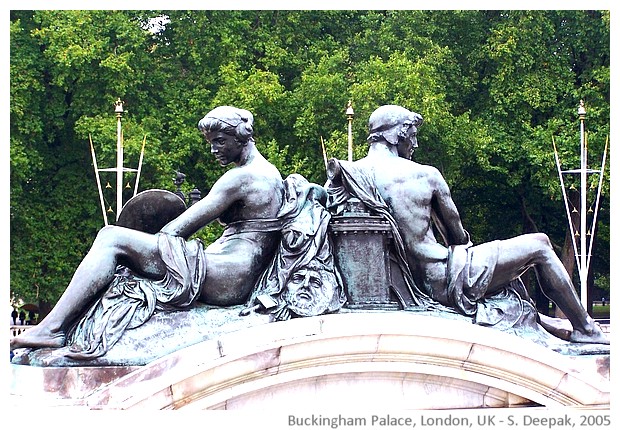 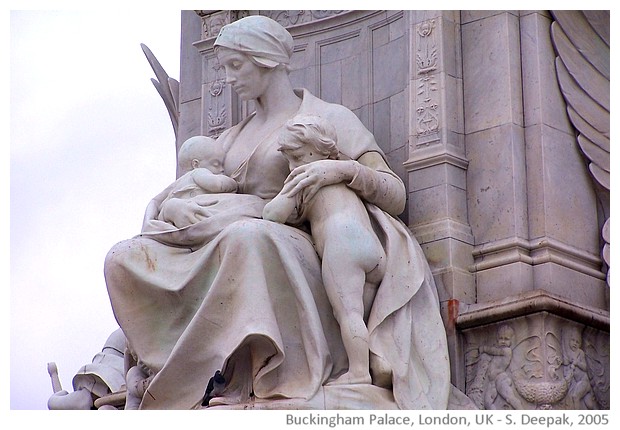 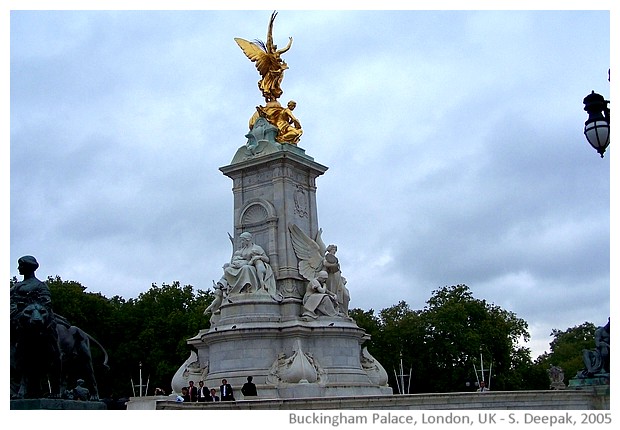 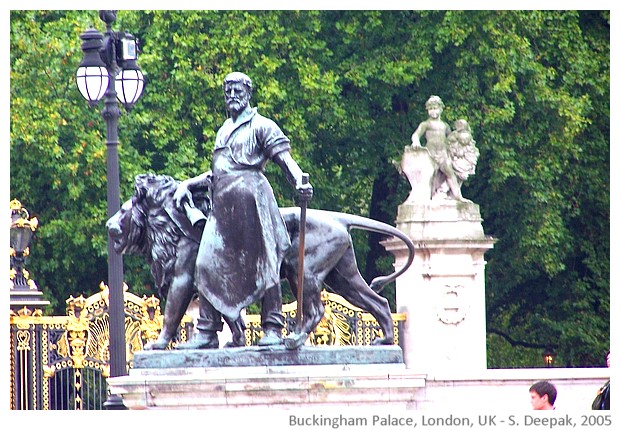 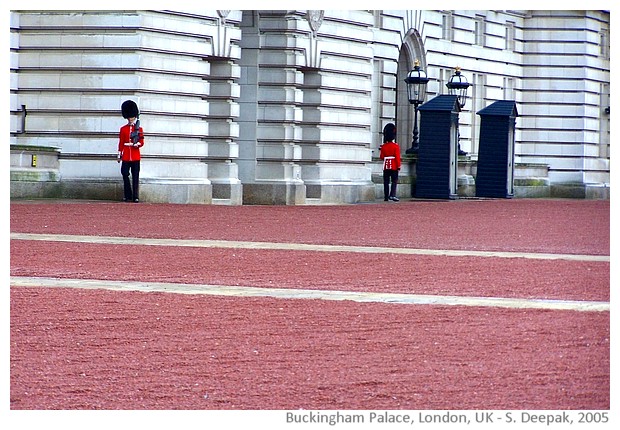 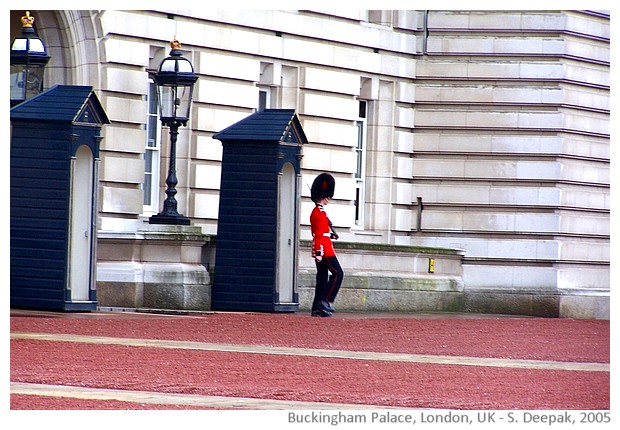 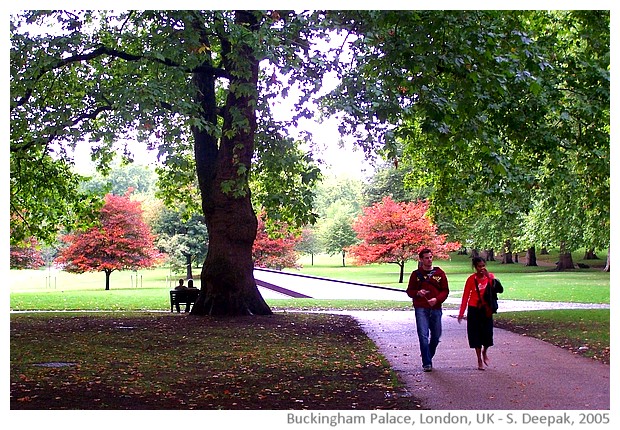