The digital camera and my frequent journeys mean that I have lot of opportunities to click pictures. A very small part of those pictures end up in a blog-post about the journey or on my photoblog, but most of the time, they are for my personal pleasure.

Thus, this year I have decided to present a few samples of those additional images, by selecting those images that have a special meaning for me or that I like a lot. Thus, yesterday, I presented the my Best of Nature and Wildlife pics from 2011. Today I am presenting my Best of Art and Culture pics of 2011.

(1) Images from Prague in Czech Republic: I want to start with a few pictures from Prague. The city is incredibly rich for appreciating wonderful examples of art, culture, history and architecture.

This first image is of the monument to the victims of communist regime. The broken up human beings on the stairs, surrounded by lush green gardens is very powerful. 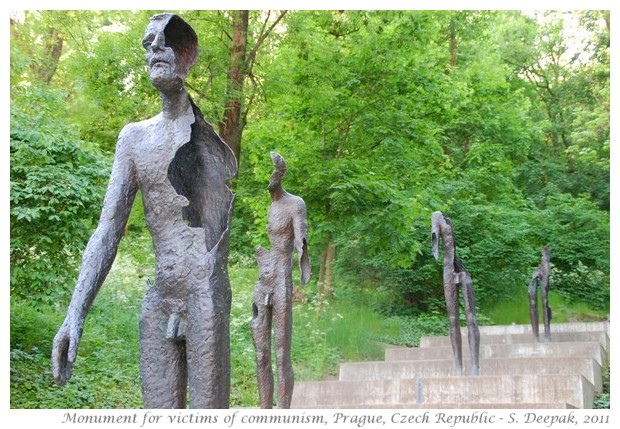 (2) The second image from Prague is that of a group of socialist or Soviet style statues from the opera building in centre of the city. I have seen similar statues of healthy and happy looking peasants in different countries of ex-Soviet union and in countries like China and Mongolia. 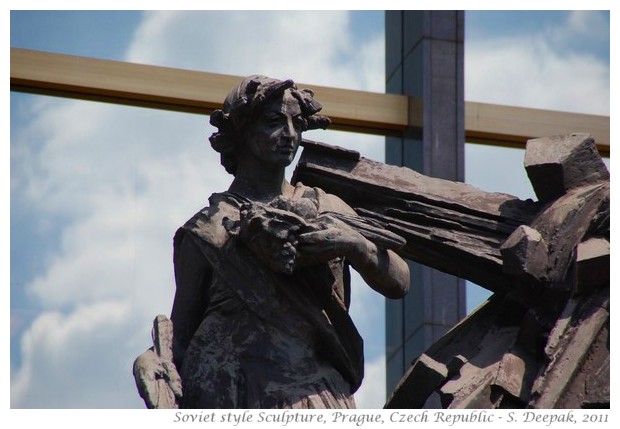 (3) The next three pictures are all of sculptures by Anna Chromy from the city of Prague. It was love at first sight for me, on a rainy afternoon when I had seen her blind-folded musicians dancing to a silent music. 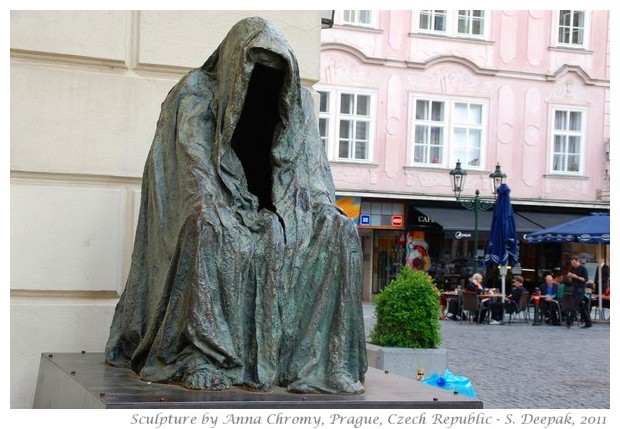 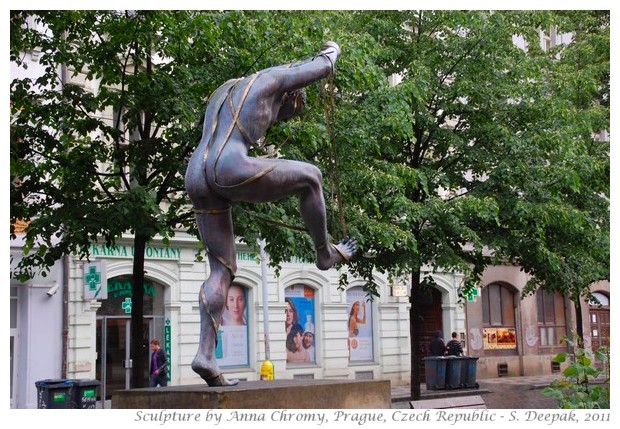 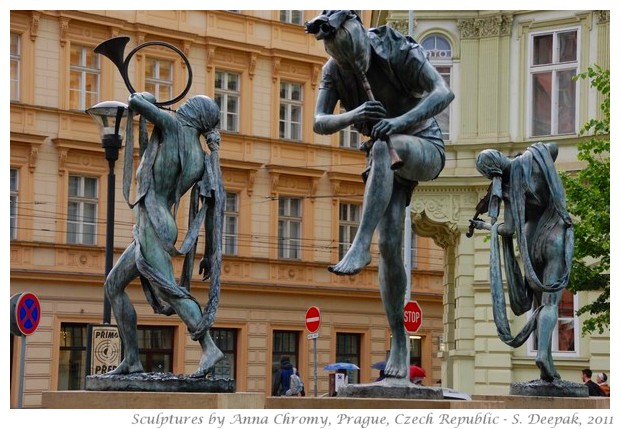 (6) This last image from Prague is from the Kampa museum.

Even with these six pictures from Prague, actually I feel that I am not doing justice to Prague and I could have added so many other images of sculptures and buildings. 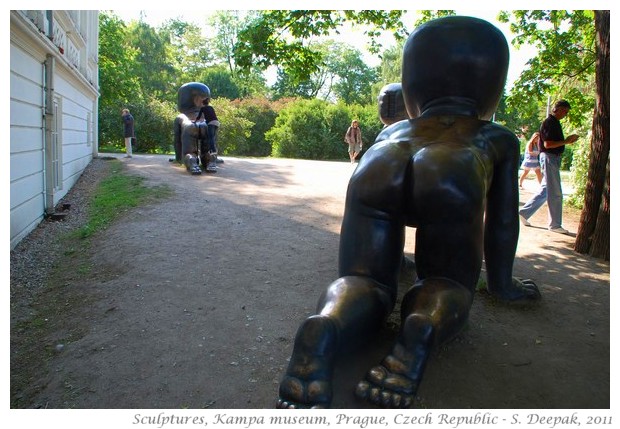 (7) The next image is from the old city of Goias Velho in Brazil. I find the statue and the city square very Portuguese in its conception, and yet the presence of Amerindians living here and the black slaves brought here from Africa contributed something intangible and at the same time, concrete, to the character of this city. 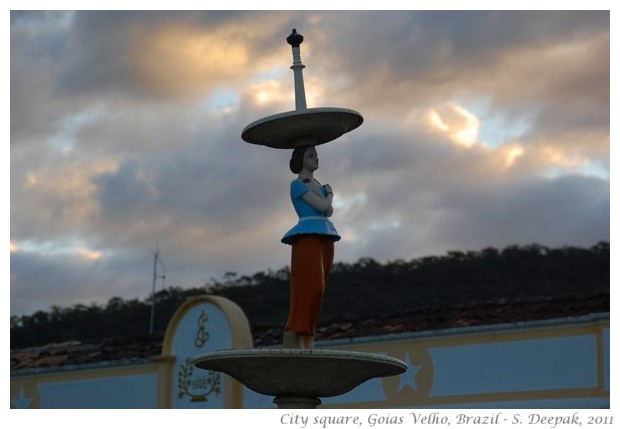 (8) 2011 was for me, the year of discovery of Bidar in Karnataka. In terms of architecture, art and culture, I think that Bidar is a jewel of a city with the wonderful fort. The pictures below are of the other two special heritage sites that I liked - Khwaja Gawan madrassa and the beautiful Bareed Shahi park. 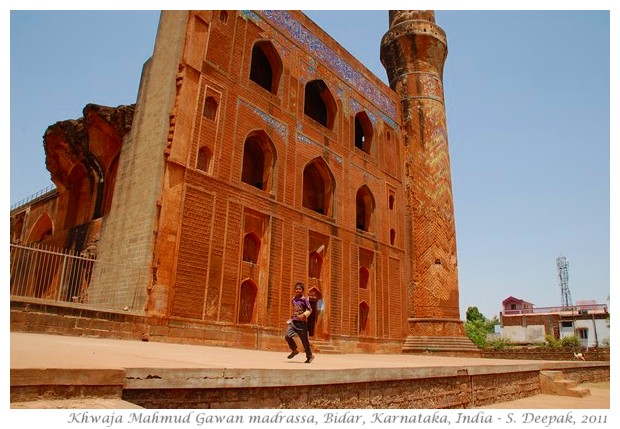 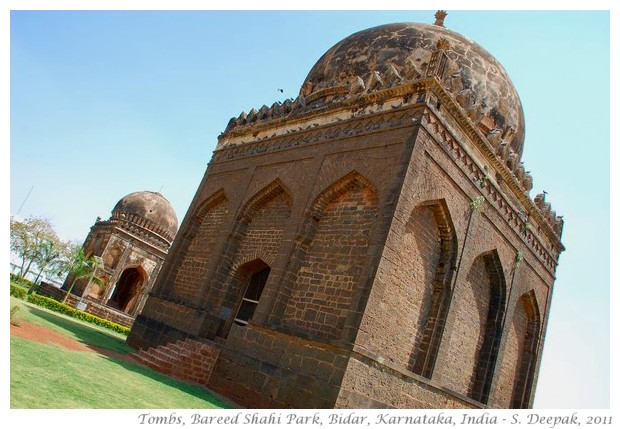 (10) In 2011, finally I could satisfy another of my long standing wish, to visit the Hampi ruins. It was a brief visit under a scorching sun and I didn't get the time to go down to Tungabhadra river. Still I am glad that I had this opportunity. It is a magical place. 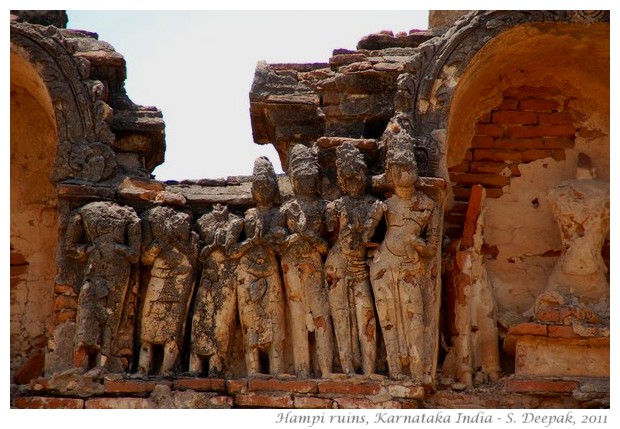 (11) In 2011, I had 3 brief visits to London (UK). However, even though the visits were brief, I was determined to visit those parts of the city that I had not seen before. The next five pictures are from those visits - from Greenwich metro station, maritime museum, the women in the second world war monument, a statue near covent garden and the Victoria and Albert museum.

London is another incredibly rich city for art and culture lovers and I have so many wonderful memories from its museums and parks. 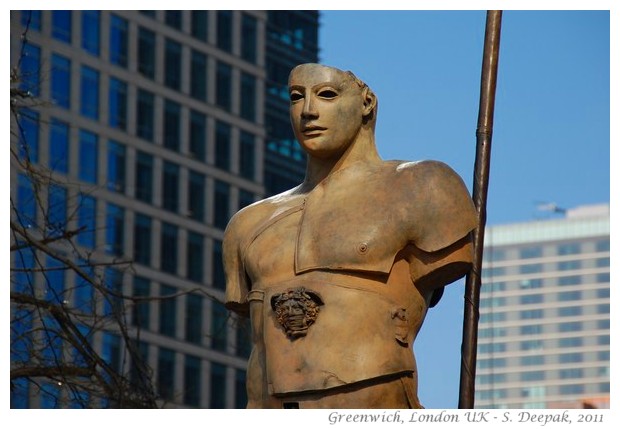 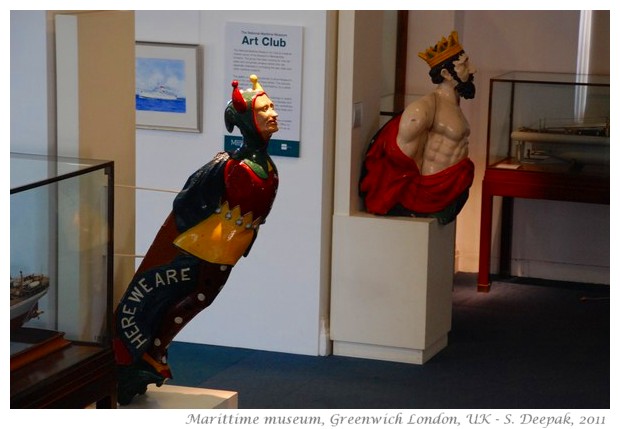 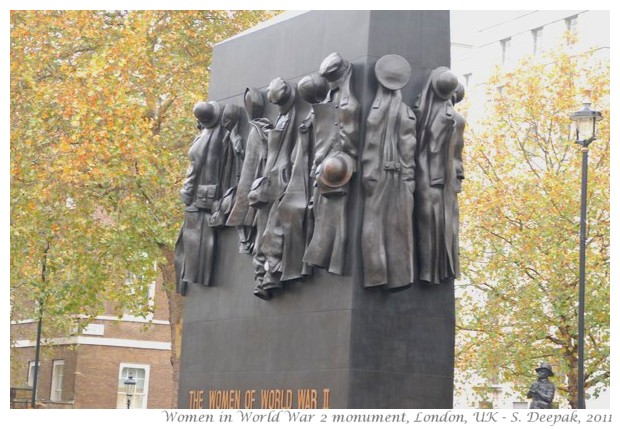 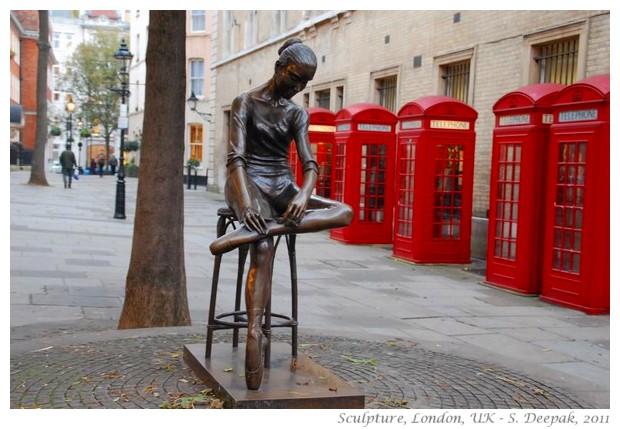 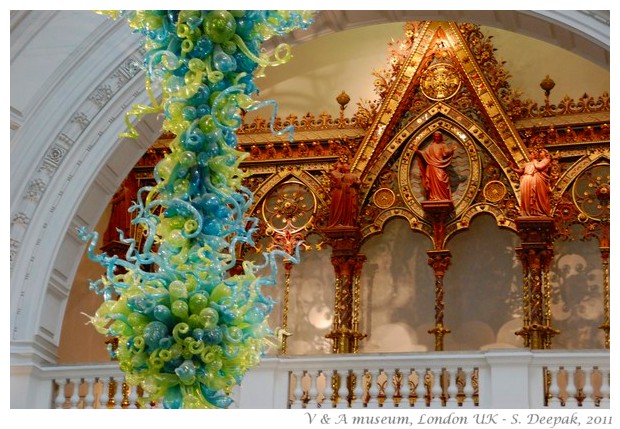 (16) The next picture is from Geneva in Switzerland. I also visited Geneva three times in 2011 and they were all short visits. Yet, in spite of the briefness of my stay, I used every small opportunity to explore the city. The combination of art installations and an extraordinary variety of flowers along the left bank of Le Man lake, made for a very pleasant experience. 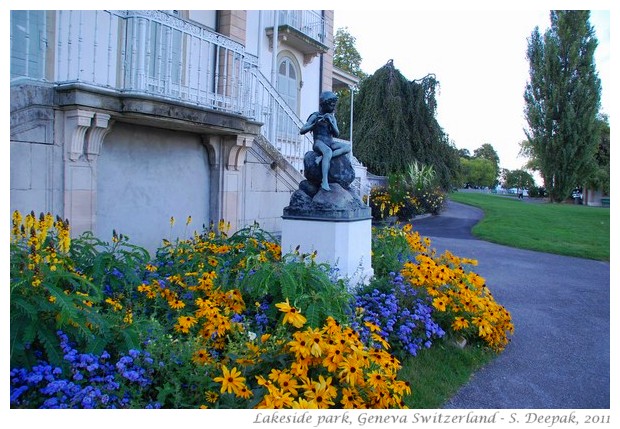 (17) In 2011, I also discovered the Bologna's master sculpture Nicola Zamboni. The next picture presents one of his terracotta statues from Villa Spada in Bologna. I absolutely love these statues and can gaze at them spellbound for hours. In my opinion, they are pure magic. 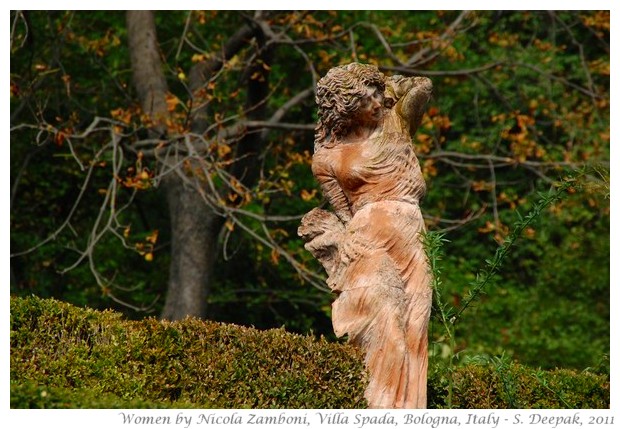 (18) The next picture presents an exhibition of bronze and metallic statues with medieval warriors and women from Europe and Middle East by Nicola Zamboni and Sara Bolzani. It was another unforgettable art experience of this year for me. 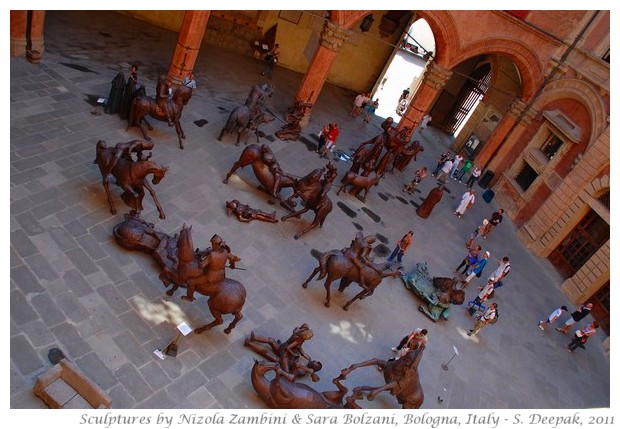 (19) Sculptures by Mirella Guasti: I had seen works of Mirella Guasti for many years but somehow they did not make that impression on me till this year. Suddenly in 2011, I started looking at her work with new eyes and found them very beautiful. You can admire her work in the next picture. 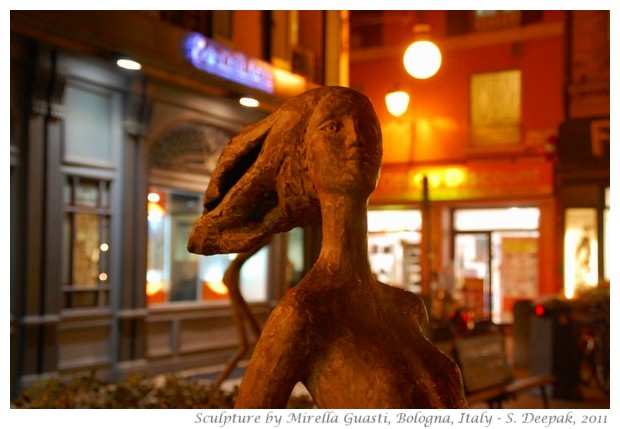 (20) This last image is by another Italian artist called Ericailcane. A rebel artist who became known by his graffiti art on the Bologna city walls, he uses giant figures of animals to provoke new sensations. The sculpture of the giant cat looking hungrily at a big box of fish is called "Cor Dubbium Habbeo" (My heart has doubts). 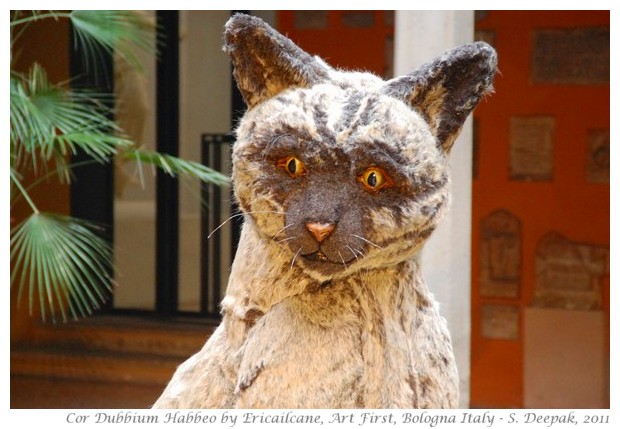 I hope that you have liked my selection of my best images from 2011 on art and culture.

***
You can see more of my images at Kalpana Image Archives.