When someone says "family", my first thought is of a man, a smiling woman and their two kids. They look like the family shown in a cereal ad on the TV, a testimonial to the power of advertising. However, real life families are different.

Depending upon people's backgrounds, the word "family" makes most persons think of "nuclear families" or small families, composed of parents with one of two children. In some countries, some people still think of "extended families" including grandparents, uncles and aunts, but their numbers are fast decreasing.

Whatever is the image of a "family" in your mind, a mother and a father seem to be a neccessary component of a "family". However, increasingly in urban spaces accross the globe, even this is not true. There are other variations of families, like a Noah's ark, that is much more richer and interesting, then the stereotypes of nuclear or extended families. For example, there are single parent families. And, there are families where both father and mother are married to different persons, so children can have two moms, two dads, and different multiples of grandparents.

However, families with same sex couples as parents are still uncommon. If they are there, they are usually hidden. This article explores some examples of these new kinds of families and the challenges they face.

A cover article in a recent issue of Outlook was about "coming out" of Lesbian couples in India. One of the stories in this article was about a family composed of a woman, her companion and her 18 year old son from a previous marriage. “It’s best to disregard taunts from classmates and neighbours,” the son had said, hinting at how stereotypes influence public perceptions. 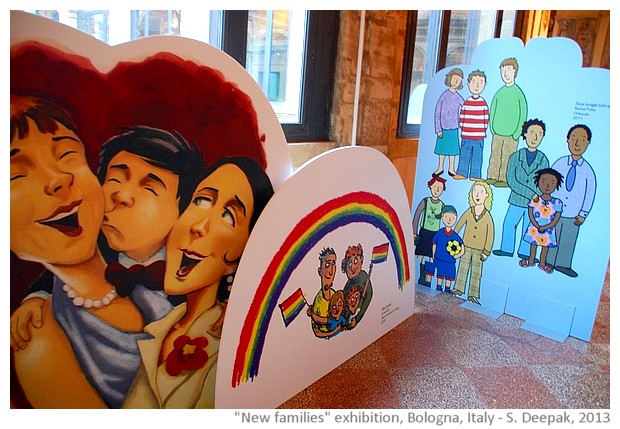 The "New families" exhibition reminded me of some groups that had participated in the last Bologna GLBTIQ pride parade, that I had participated in 2012. Earlier, when we spoke of alternate sexualities, we talked mainly of gay or lesbian couples. However, with time, many other groups of persons have "come out", each specifying their own specific situation that is different from those of the other groups. Thus today when we talk of sexualities, we talk of hetrosexuals, gays, lesbians, bisexuals, transgenders, intersexuals and queers.

I think that the growing numbers of groups under "alternate sexualities" is a recognition of infinite diversities of sexualities among human beings and thus, the GLBTIQ (gays, lesbians, bisexuals, transgenders, intersexuals and queers) lable needs to seen as symbolic rather than an accurate representation of the reality of sexualities. I think that sexualities can be dynamic, at least in some persons, so that that they may place themselves differently in the GLBTIQ spectrum at different points in their lives.

In the last Bologna GLBTIQ pride parade, there were some groups representing specific professional categories such as a GLBT police-military group and lawyers' group. This was a reminder that in spite of stereotypes, GLBTIQ persons can be in any profession and not just involved in fashion, cinema or arts. 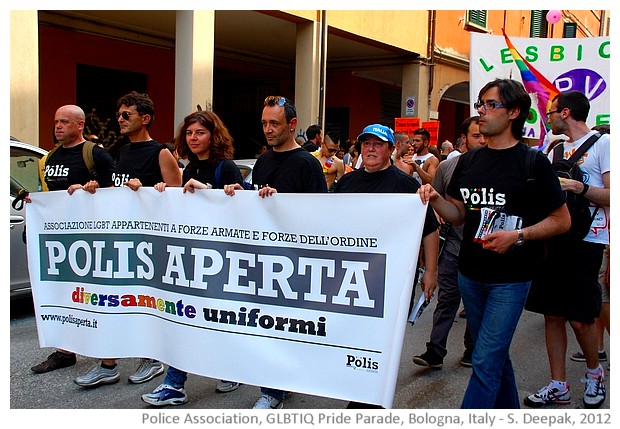 In the parade, there was also a group that runs a telephone helpline on GLBTIQ issues. I think that such a service is important for young and adolescent persons, who are not sure of their sexuality and who need to talk to someone about their doubts. Such a service can also be useful for parents who need to talk to someone to understand what is happening to their children and how they can support their children. Such helpline is also useful for persons who face discrimination and harrassment at their workplace. 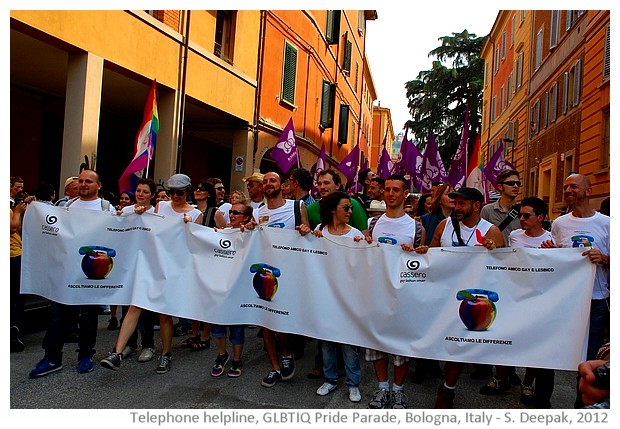 There were some other groups in the parade that were concerned with the relationships between sexuality and religion, especially about a dialogue with Catholic religion. These groups of persons explored the issues around non-acceptance of alternate sexualities in their religion, and thus, asked how they could continue to feel part of their religion. 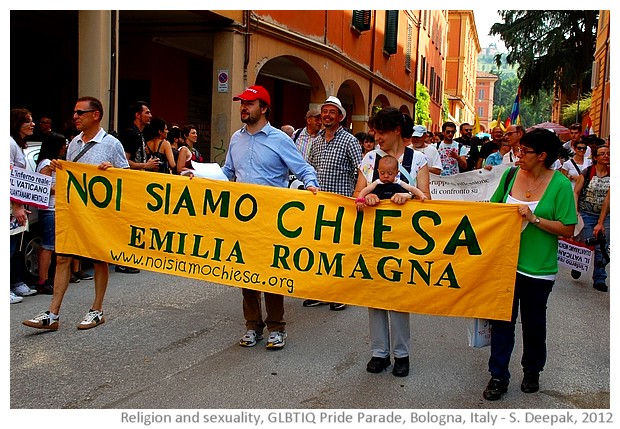 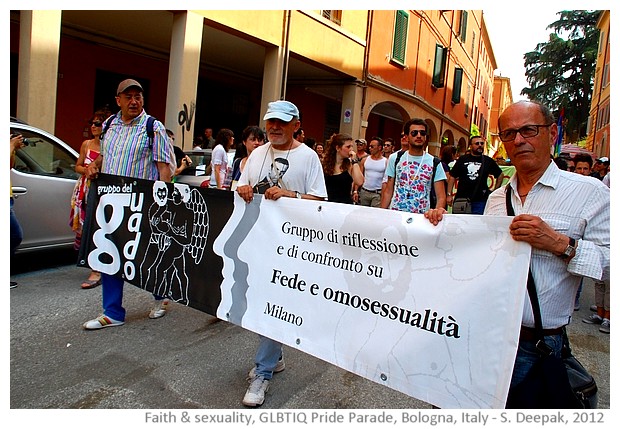 Parvez Sharma's documentary film "A Jihad for love" had explored similar questions for same-sex Muslim couples, some of them with their children.

In most religions, there is little acceptance of alternate sexualities, and thus little recognition and support for these families. Sometimes, religions are used to justify violence and discriminations against GLBTIQ persons.

In the Bologna GLBTIQ pride parade in 2012, there were a few examples of families dealing with alternate sexualities."Famiglie arcobaleno"  or Rainbow families, are families where the parents are same-sex couples, composed of two men or two women. Their children may have been born with support of surrogate mothers or artificial insemination. Sometimes, a gay and a lesbian couple may also decide jointly to have a baby. 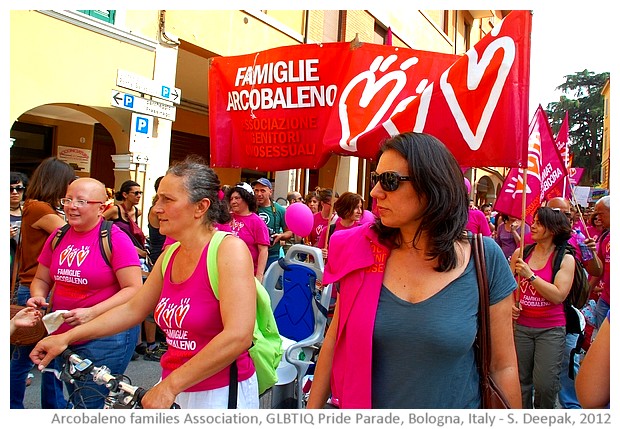 There was a another group, presenting a variation on the Rainbow families, those LGBT persons who had children from their previous heterosexual relationships. 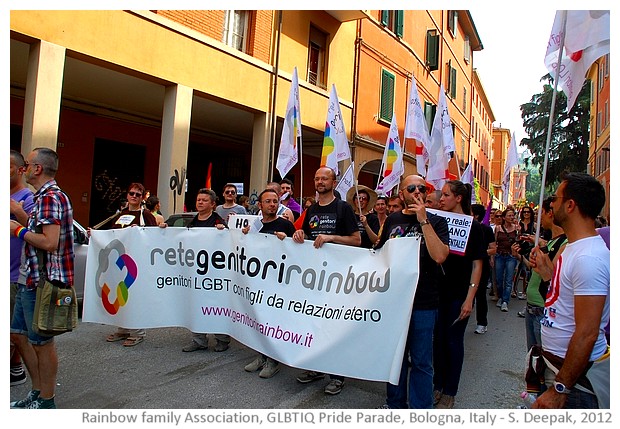 These were also some organisations of parents of gay or lesbian persons. Sometimes as parents, we may have our own ideas about alternate sexualities and thus, we may not accept our children's sexuality. However, often it is the fear of the opinions of others (family, neighbours, communities)  that makes parents refuse their children because of their sexuality. Sometimes, parents are against same sex relationships because they think that if their son or daughter is gay/lesbian, they will not have grandchildren. 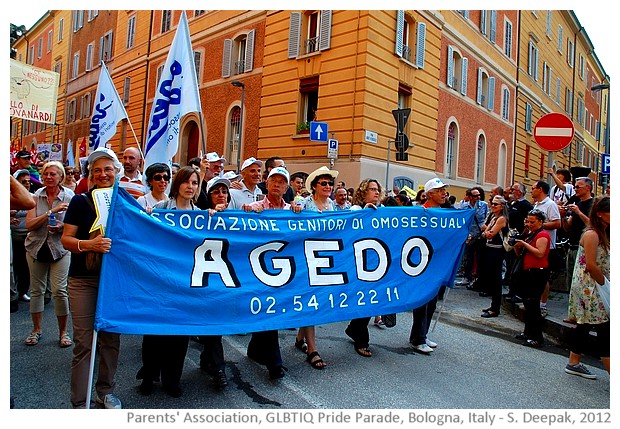 Thus, I think that associations of parents of GLBTIQ children can be an important peer group to support us to be more accepting and open to our children. Personally I feel that it is easier for mothers to accept their gay sons and lesbian daughters, and it is much more difficult for fathers to accept it. Friends, colleagues at work, society at large, insinuate that there must be something wrong with you as a person and as a parent, if your son or daughter is a homosexual, it is your "fault".

As parents we need to learn that if we want to support and love our children, we may need to fight for their dignity with our friends and families.

In the Bologna pride parade, I saw a group of parents walking with the poster of a young boy who was murdered because of his being a gay. As a parent, I can understand the fear we can have for our children because we know that our societies can be harsh and cruel to them when they do not fit in. Talking about it with other parents in similar situations and supporting each other is important. 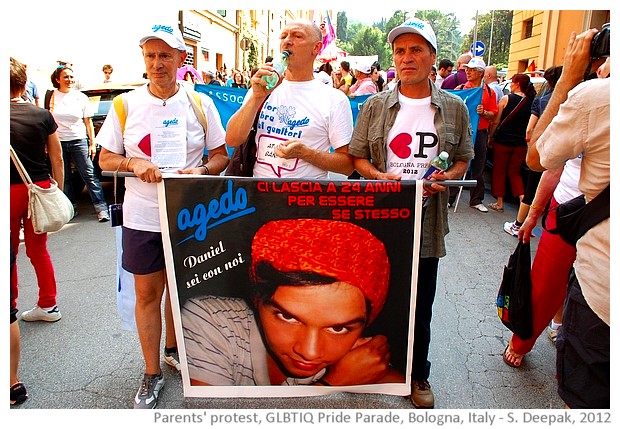 In my opinion, the basic reality of human relationships is the same every where, the west and in the east, across christians, muslims, hindus, jews and everyone else. GLBTIQ persons are there in all cultures, religions and countries. However, in many places, they have to hide and be afraid because their societies do not wish to recognize them and accept them. They are seen as a danger to morality.

I believe that hiding or killing persons because they are different, in the name of religion or culture or morality, is wrong. A society where people can be who they wish to be, rather than who they must be, is a society where rights of everyone is respected, a world of diversity and richness.