It is my first day in Bangkok. I am determined to go around the city, even if it means waking up at five in the morning with a five hour jet lag and walking around like a zoombie. Every day some non-work related visit, even if it is very small, that is my resolve. The meeting today was never ending, starting at nine and going on till eight in the evening. We didn't even have a lunch break, and while others were eating I made my presentation, which meant that no one asked me any questions!

However, inspite of all my good intentions, by the time I came back to the hotel, I was so tired that I immediately went to bed.

I had the meeting at the UN centre and I found time to sneak out and take a look at the democracy protesters outside. They have blocked many roads just outside the parliament house. There is a huge screen showing some leader thundering against corrupt government leaders. "Thaskin get out", is written on a huge board. But the whole place is almost empty. Perhaps it is the heat?

But isn't Thaskin already out, why are is PDA (people's democracy alliance) still continuing its protests, I ask. Somchai, the new prime minister is Thaskin's brother-in-law, someone says. Someone else says that PDA is not just democratic idealists and radical revolutionaries, it also has power brokers, old military men and other lumpen elements.

I don't know the country or its politics well enough to express any opinions, but I am impressed that the government can allow protesters so much space and autonomy in the middle of the city centre, for months. There is no police inside the protest area, it is covered by barbed wires and PDA persons control that you are not carrying any guns or bombs inside. 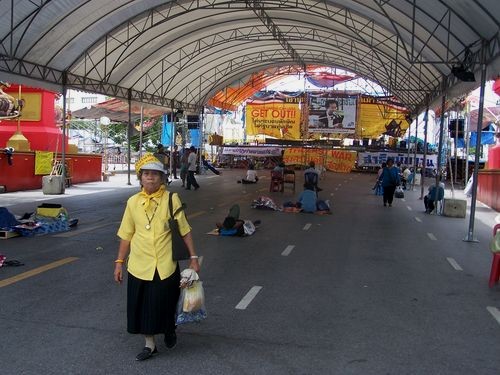 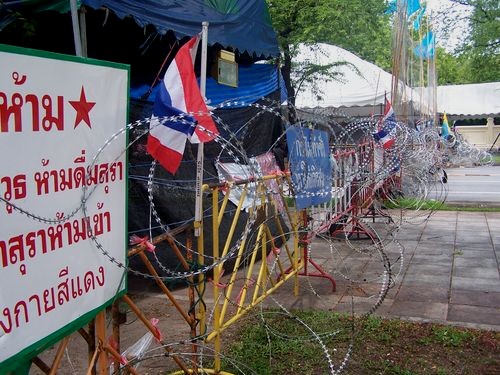 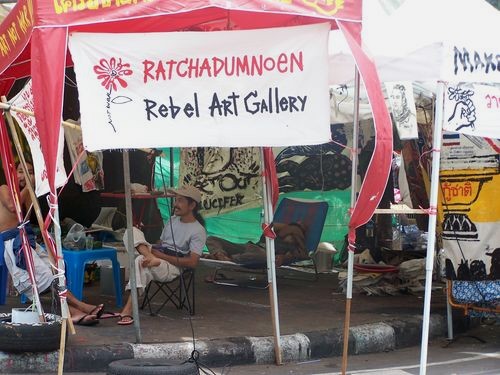 ***
Bangkok airport has this amazing group of statues at its entrance. With a purple moustached dancing Vishnu in the centre and golden Sheshnaag, the divine snake being pulled by the fair skinned devas and dark skinned asuras for finding Amrit, the necter of immortality. People entering the airport invariably stop in front of it to take pictures and to get their own pictures.

No one stops you from taking pictures at Bangkok airport. Perhaps they do not have terrorist threats or perhaps they know that with mobile phones and other technological gadgets, taking pictures without getting detected is easy now. Perhaps Delhi airport authorities can learn from them and be less paranoid?

On one hand, I like this kind of public celebration of cultural and religious myths. Perhaps rather than Indian "secularism means no religion or religious symbols in public spaces", it would be more colourful and enjoyable to have symbols of all the different religions in public spaces in India.

However, while I like the colourful statues of Bangkok airport, there are two things about this story of devas and asuras that I do not like. First is all the racial undertones of the fair skinned devas and dark skinned asuras. Second is the treachery of devas, who use Vishnu to cheat the asuras and take away all the Amrit, necter of immortality. Were not devas supposed to be the good guys? The story makes me think of the friendship gesture of Vajpai who went to Pakistan while Pakistanis were planning the attack on Kargil.

There are other such photogenic places in Bangkok airport. I heard that Delhi is making a new terminal 3 that should be ready by 2010 Commonwealth games, perhaps they can take some ideas from Bangkok about airport decorations! 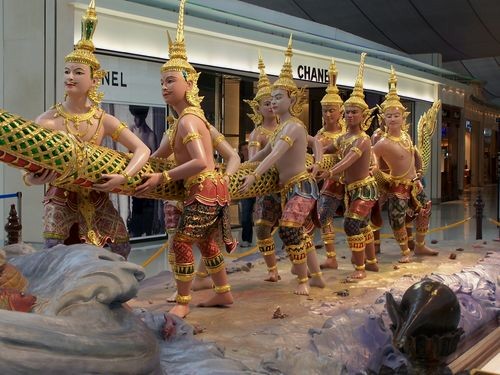 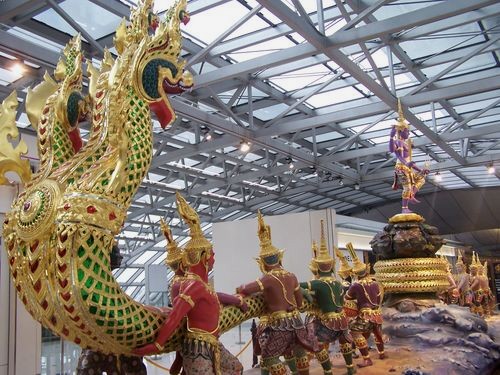 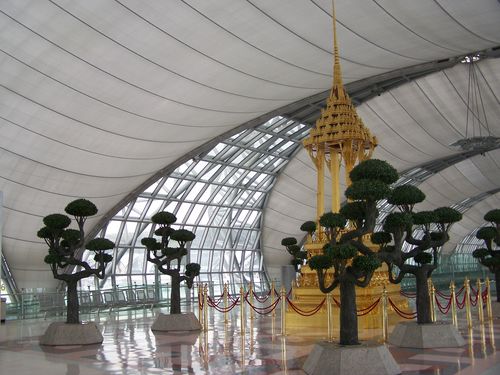 ***
Bangkok seems to me the city of cats. I have never seen so many of them except long time ago in Venice. Now even in Venice you don't see them any more but here they lord over empty temples, fruit markets, side walks. They are not afraid of me. Some times, they come near, rub against my legs and meow, waiting to be scratched behind their ears. 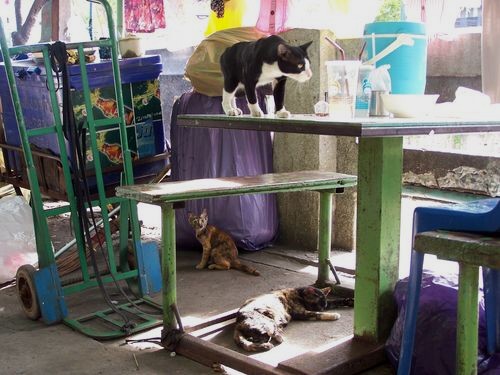 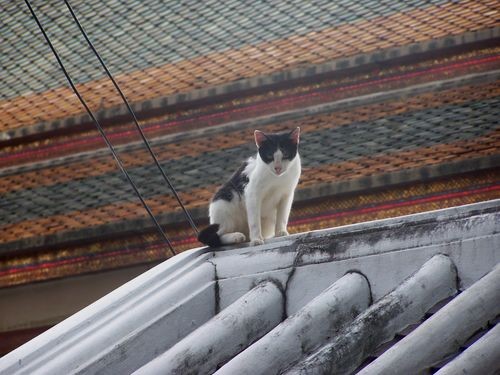 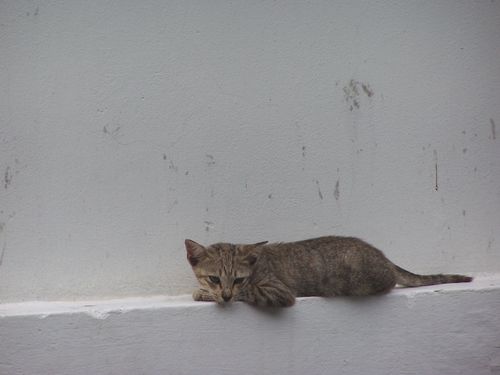 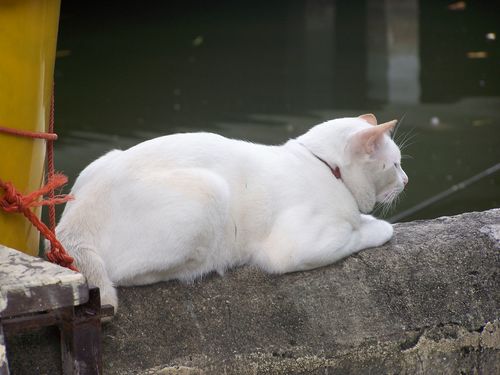 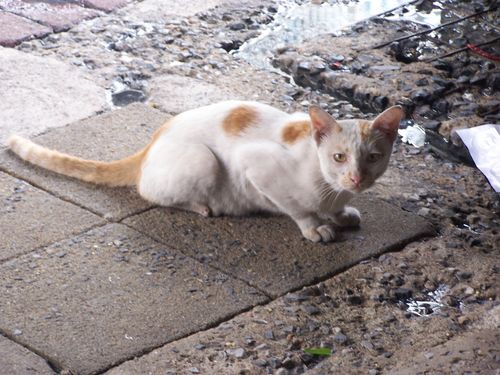 Even dogs abound in Bangkok, perhaps it has something to do with the Buddhist piety? One of the most lovable was this small puppy at the shop in Mahanak fruit market. 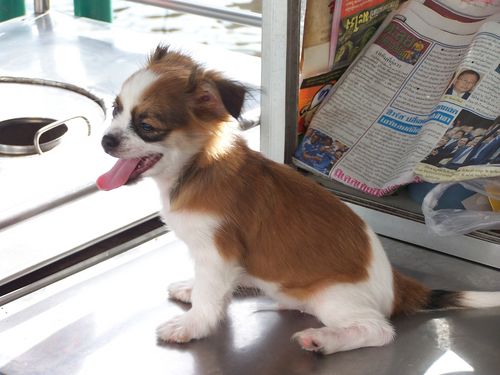 Except for the restaurents in our hotel, I can't find any restaurents here. No Wimpy, or McDonald, or KFC, etc. There is a food center on the sixth floor, in the shopping mall under our hotel but it closes at 6 PM and evening dinner is a problem. We are in an area full of thousands of shops and people milling around all the time but the only eating places are all Thai street venders kind of persons, where no one speaks English.

Yet, Thailand has been open to foreign markets for a long time. Why didn't McDonald and KFC try here? Or, perhaps they did and didn't find much market? That Thailand has never been colonized and very small percentage of people here speaks English, and they all seem to be very proud of their language, their culture, has something to do with it?

I don't know. So I usually go to eat on the roadside eateries, pointing at things I want to try. They are good most of the times, even if sometimes so spicey that I almost need to call a fire brigade.

Just accross the street from my hotel is this bustling fruit, vegetable, fish and meat market. Compared to similar places in India, I feel that narrow streets in this area are less dirty and people carrying heavy loads and doing menial work, seem slightly better. 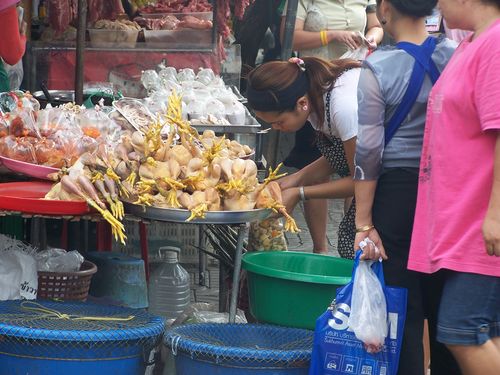 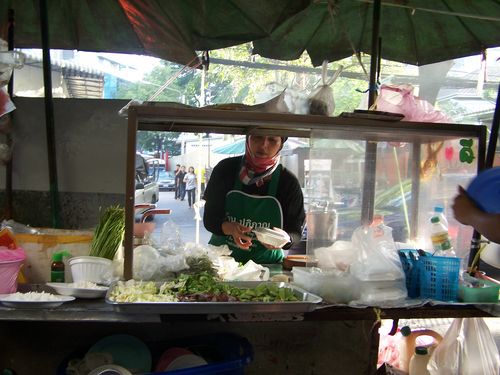 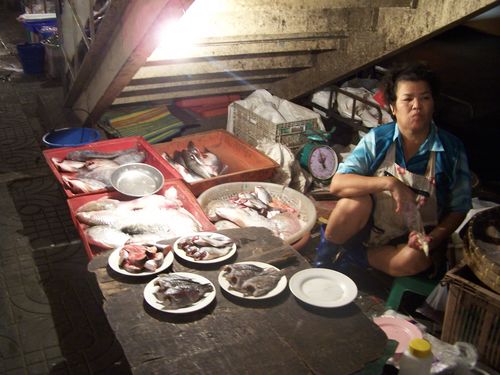