Thai people are always so gentle and smiling. I don't remember any encounter with a person who talked to me with anger or irritation.

However, I did meet a crazy taxi driver. He had a picture of himself with his son on his dashbaord and a small golden Buddha statue. He drove like a maniac on the run. On the highway, he wove in and out of the traffic, overtaking from right and left, and when required passing on the emergency lane while I was holding on to the seat with a thumping heart and praying silently. In between he had long and vivacious telephone conversation so that he missed the turnings and then backed straight into the traffic, uncaring of braking cars all around. He whistled at all the women, made some easy-to-understand gestures to explain what he would like to do with them and when some of them looked back at him with disgust, he broke into loud laughter. 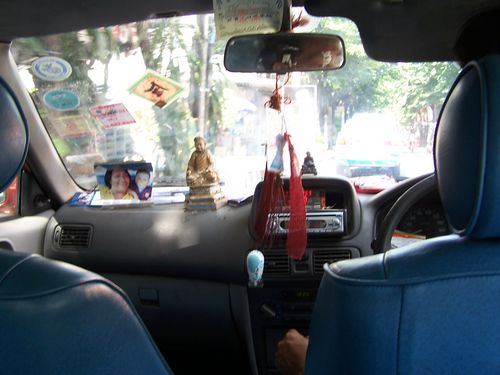 Every now and then, after such an encounter, he would turn back to look at me and wink. Dumb sod, driven by testostrone with his brain in his dick, I repeated to myself while smiling back at him. How do you deal with such macho types? They give me an inferiority complex even while I tell myself that such excessive machoness must be a sign of some deep sense of inadequacy.

"How long are you going to take? Should I wait for you?", he asked when we reached our destination, while I mopped my brows. No more taxi for me today, I told him, I will take the sky train for going back.

Another picture that remains in my mind is that of groups of men intent on their billiard tables in narrow market streets. 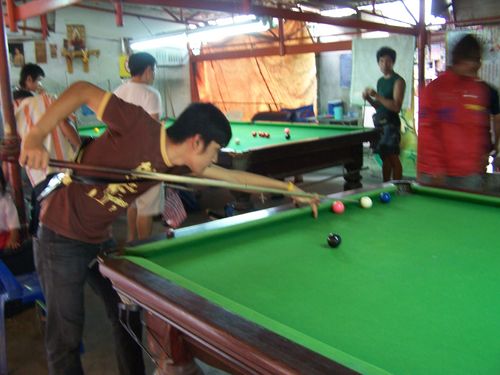 ***
Temperatures were not so high but the humidity was bad and it brought back memories of Chenai, when it was still Madras. Fortunately all the meetings were in air-conditioned buildings and all the taxis were also air-conditioned. So the trick was to work during the day and go out only early morning or in evening, when cool breeze was so pleasant. Even local Bangkokites (BTW, how do you call Bangkok inhabitants? Bangkokies? Bangkokinese? Bangites?) shared this view since in the afternoon, every one seemed to prefer lazy siestas. 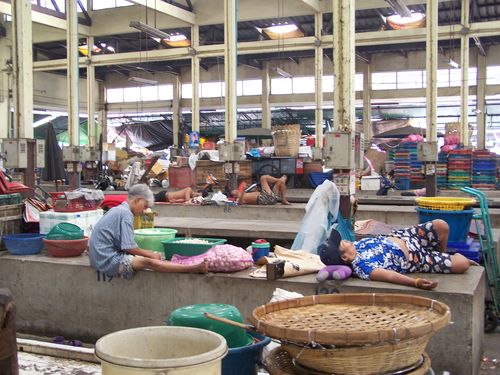 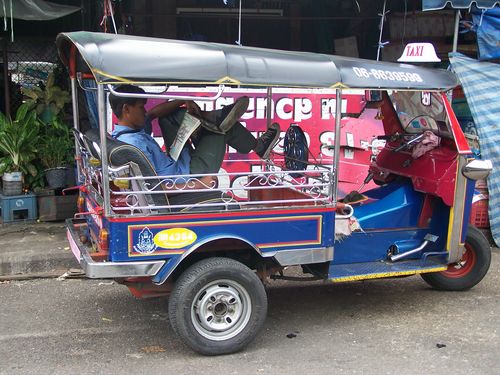 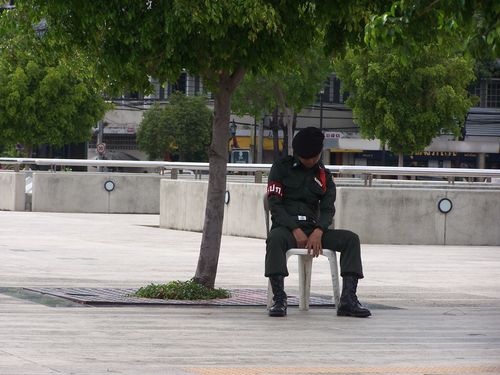 ***
I loved the dresses of the Thai air-hostesses. They must be the best dressed airlines crew of the world. Their purples, magentas, and occasional yellows, blacks and grey coloured traditional dresses in silk make them seem like statues from some ancient temples. In fact, I think that if I have choose colours for Thailand, I would choose purple and magenta like in the lotus flowers in a temple below. 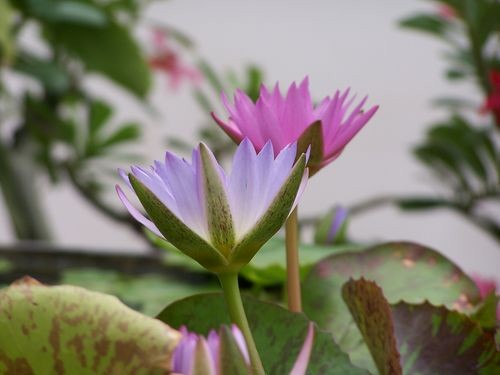 ***
Bangkok is rich in temples and religious symbols. The Buddhist monks fascinate me with their orange robes and they didn't seem to mind when I stopped to click their pictures. 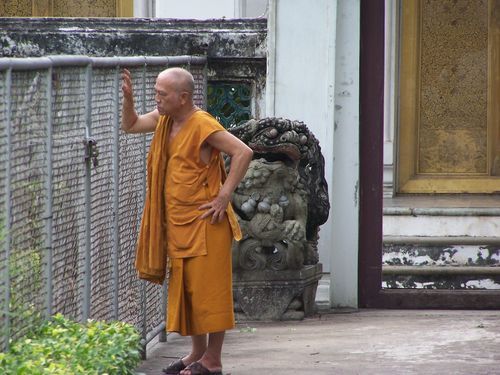 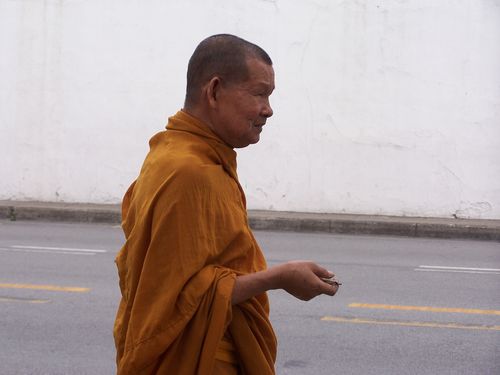 Thai people have a special relationship towards their King, that was so strange to me. It reminded me of the kind of faith people in an Indian village can have for religious figures like Ram or Hanuman, full of reverence and awe. Like this statue of the king, where one person came to me to ask me to pray before taking its picture. 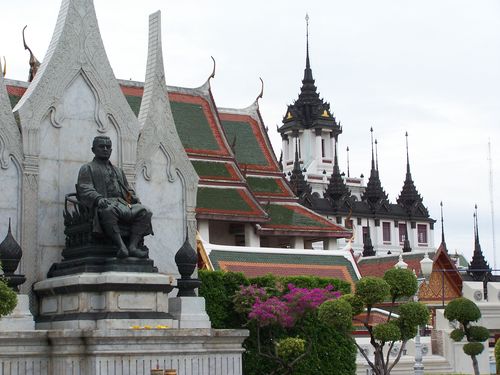 Other statues, in spite of obvious differences in facial traits, provoke old memories like this statue in an old Buddist temple in Mahanak that made me think of "chalat musafir moh liya re pinjre wali muniya" from Teesri Kasam. 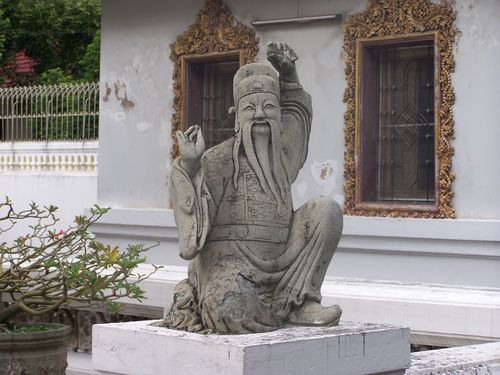 I was fascinated by the Buddha statues in different postures. At one level I find it a little strange that statues of Gautam Buddh who left his palace to become a bhikshuk and preached about non-attachment are almost always of gold. Though as a child I used to go often to the Buddh temple in Birla Mandir in Delhi, I knew about the basic story of Gautam Buddh and had even been to Lumbini, my knowledge about his teachings was relatively limited.

Bangkok visit stimulated me to buy and read Pankaj Mishra's book, An End to Suffering - The Buddha In The World (Picador India, 2004). If you have not read it and you are interested in Buddha and Buddhism, I recommend this book. It is an immensly readable mix of auto-biography, anecdotes and reflections about Gautam Buddha's life and teachings. 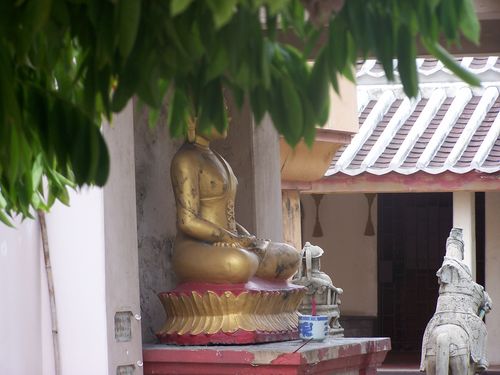 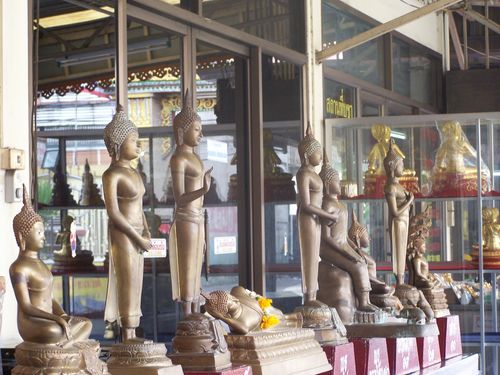 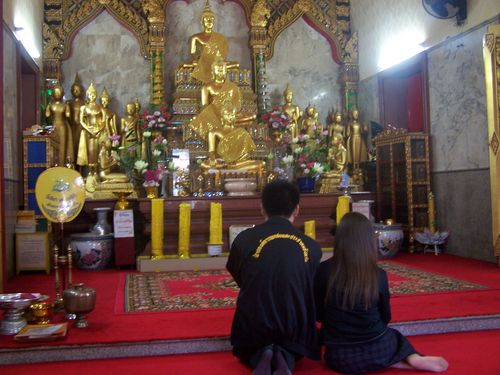 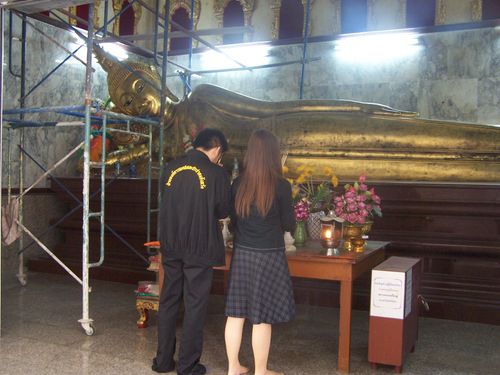 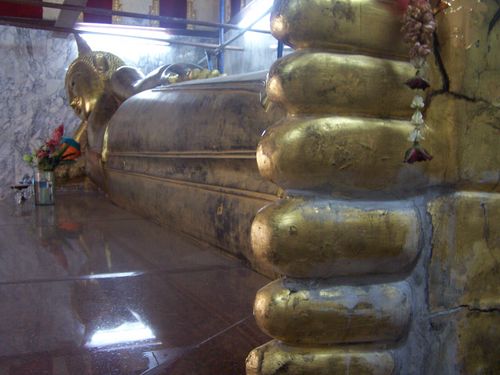 Along with Buddhism, Thailand also has signs of Hinduism. Brahmin priests are part of Kings religious ceremonies. Like the Garuda statue on royal buildings that carry the queen's name. 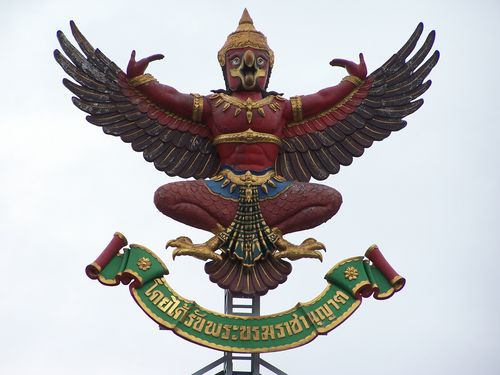 I was also struck by the statues in black stone of some kind of priests or gurus. Perhaps looking at all the gold coloured statues was responsible for this effect, but when I saw them against the backdrop of colourful frescoes, I thought that they looked striking. 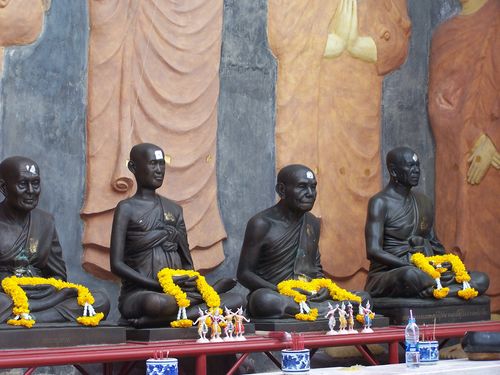 ***
The giant swing, Sao Ching Chaa, was used for some kind of ritualistic event in the past. However, many persons involved in the ritual who were supposed to swing on it lost their lives and the ritual was stopped in the last century. There has been some idea of restarting the ritual as part of the tourist attraction events. Now in the middle of a traffic island, it looks like an awkward giant left there from an alien ship. 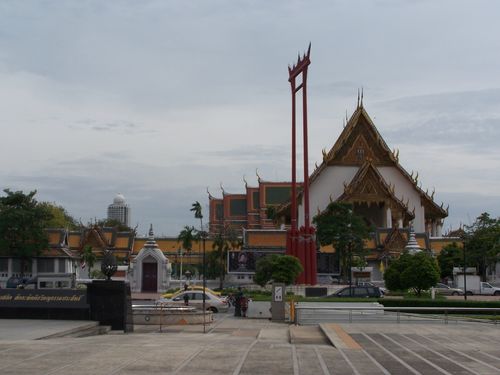