The email from our local library asked, "Are you interested in learning about plants and trees and how these are inter-connected with life on our planet? Join us for an exploration of green areas surrounding us in the city and yet hidden from us ...".

The city where we live, Bologna (pronounced Bolonia), offers a regular and frequent choice of talks, discussions, art visits and films. Normally I sign up for initiatives related to museums and arts and it had been some time since I had gone on a walking tour. Still my curiosity was stimulated by the email so I signed up for this city walk to discover the hidden green areas of our neighbourhood. It also helped that no fee was asked for the initiative!

The walk was going to take place on a sunday morning.

Our guide was quirky guy called Marco Colombari. Dressed simply, tall and bald with an open smiling face, he seemed obsessive about respecting nature and recognising the inter-connectedness of all forms of life. He himself respects these principles by living in the foothills of Appenine mountains not far from the city, where he has an organic farm. He likes to observe plants, trees, birds, animals, insects in all the different forms and teach people about setting up of organic gardens. His fundamental motto seemed to be that nature knows what is best, so do not interfere in nature's process unneccessarily. 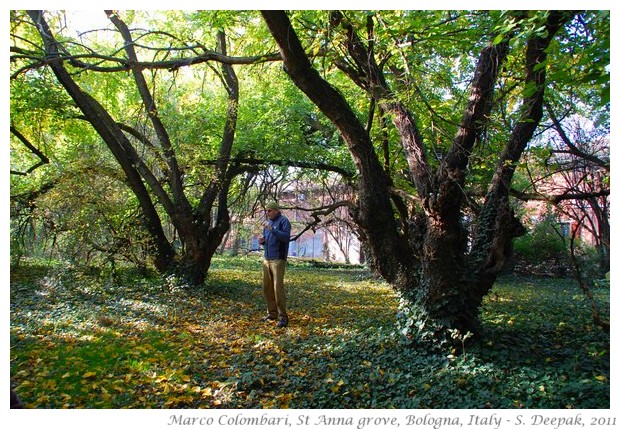 The first stop of our walk was an ordinary tree on the footpath outside the library. "This is a lime tree", he explained, "it has lost it leaves due to the winter and yet it provides food to birds in this season when birds have difficulty in finding food to survive." It seems that underneath the bark of lime tree, runs a sweet lymph  that the birds can get by hitting on the stem by their beaks. Though I had passed that tree hundreds of times before, suddenly I saw it with new eyes.

He pointed to common hedges along the road and to small berries of different colours hidden under the leaves to indicate other sources of food for the non-migratory birds during winter.

"People like geometrical shapes and uniformity, so they make single plant hedges. Then they prune those hedges all the time and they spray insecticides on it. This means reducing the biodiversity of life, not allowing bees to take necter from the flowers and not allowing the birds to access the food in the plants. Best hedges are made by mixing of two or more different plants", he explained.

"Have you seen the scars of a tree when they cut its branches? Can you see how this tree suffered when it was cut and how it has tried to grow the scar around it to cover its surface. It is like amputating the arm or the leg of a person", he pointed out to the trees to make us look at the tree-scars. It was a little strange to hear him talking of trees as if they were persons.

Behind a group of houses he took us into a hidden garden that I had never seen before. It is called the St Anna grove. It is supposed to be quite ancient, going back to times before the city had come up. It was a kind of sacred grove where plants, insects and animals were allowed to develop according to the nature. This garden is managed by a group of young volunteers, mostly girls, who come here to study plant, insect and animal life.

Surrounded by the houses, St Anna garden seemed to be quite big. Inside, he showed us different kinds of plants and trees and told stories about them.

For example he told the story of common yew tree (Taxus Baccata). Apparently the yew tree wood is very good for making long bows, as it is very strong and yet flexible. Thus in fifteenth century, British started cutting all their yew trees for making long bows and many of the ancient yew trees that were even 2000 years old were cut. Finally there were no more yew trees left in Britain. Then the British started importing yew trees from countries of northern Europe. For this reason, most of the ancient yew trees of northern Europe have disappeared and can't be replaced easily as this tree is very slow growing and can live for even 5000 years.

Another story that I liked was about a plant called "Beggers' shrub". Apparently if you rub this plant on wounds, it makes the wound-scars grow big, red and scary, so that beggers used it to provoke pity among people.

"That is Taxsodium", he pointed to the huge trees with copper red colour leaves, "it comes from America and grows near water. Its roots come out of water and are breathing roots. Woodpeckers love it as it makes for nice hole where they can nest." I had seen Taxsodium trees before and admired their coppery colour, yet I had never noticed their breathing roots or the holes made by woodpeckers.

Behind the taxsodium trees was a small artificial pond that was made when Bologna was an important centre for growing cane. Cane had to be macerated in water and then used for making ropes and baskets. The pond was used for macerating the cane in 17th and 18th century.

As we came closer to the pond, a group of ducks came out eagerly, running around us. One of the volunteers went to a persimmon tree and gave some fruit to the ducks, that was devoured quickly. Apparently the ducks knew that the volunteers can feed them with persimmon so as soon as they see the volunteers they come out running.

It was a wonderful and very instructive visit. There are so many simple things around us that as urban persons we have ignored. This kind of knowledge is also getting lost as people living closer to nature and doing humble manual work are seen as ignorant and backward, and no body listens to them or tries to document their knowledge.

Here are a few pictures from this nature walk. 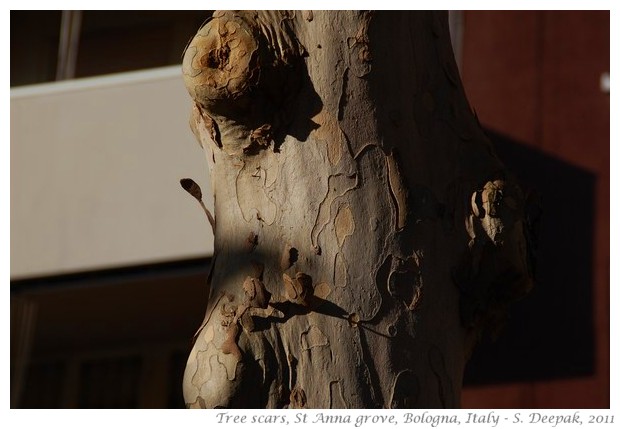 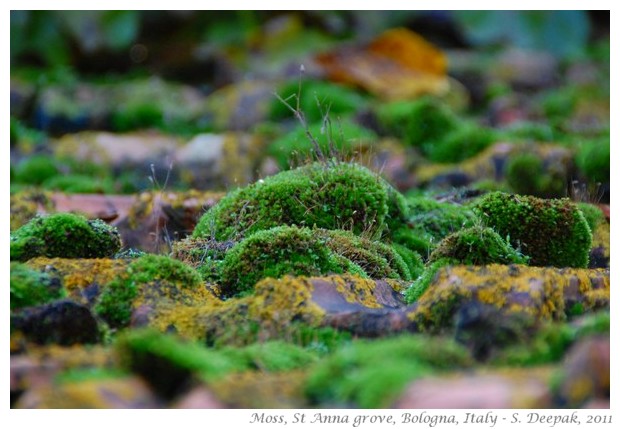 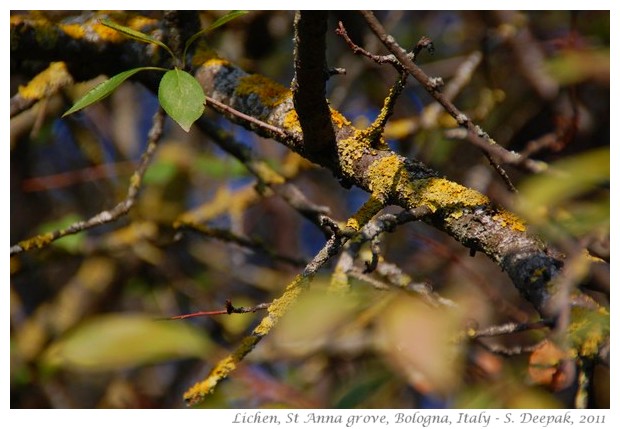 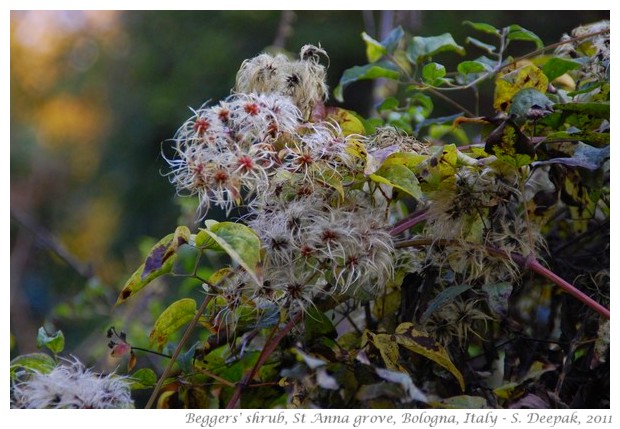 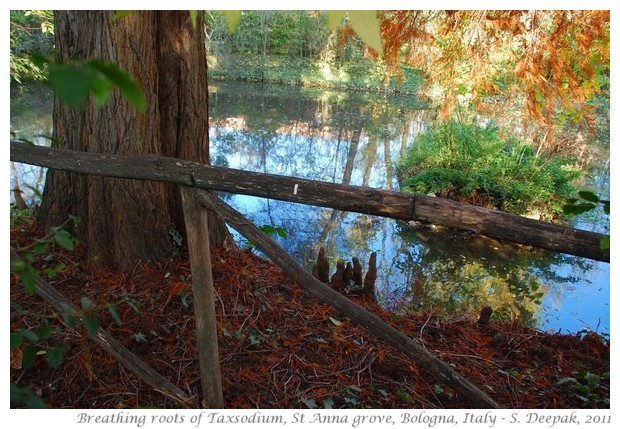 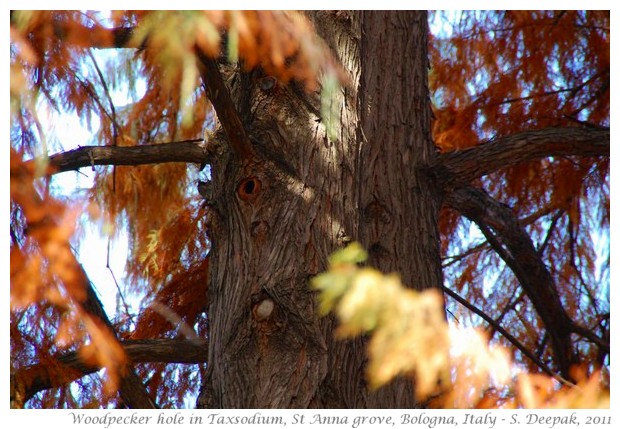 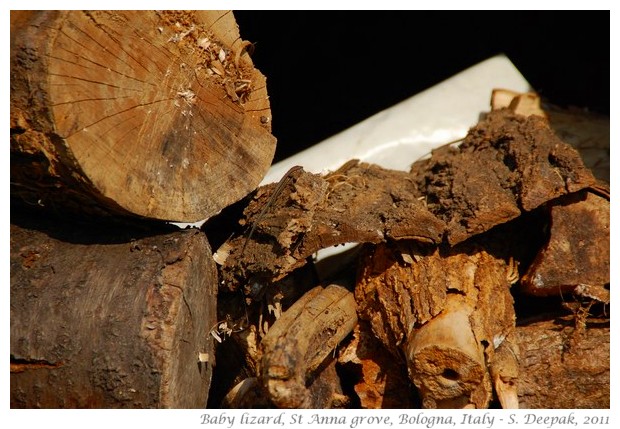 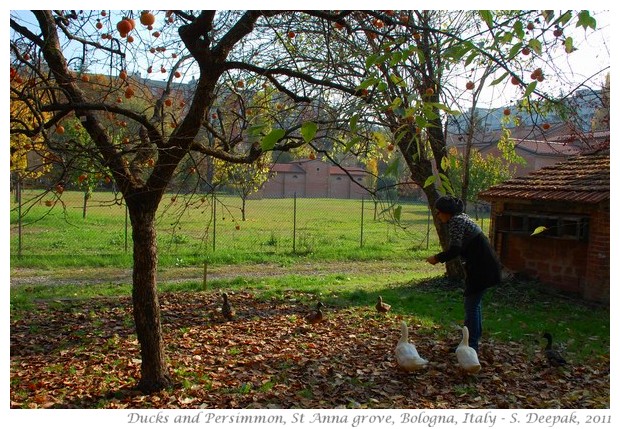