Gifts of the oriental kings

Have you ever wondered about how did the tradition of making gifts for Christmas started?

The story of the birth of Jesus says that when he was born, a comet appeared on the sky and three wise kings from the orient followed the comet to look for Jesus and they brought gifts for the new born baby. This event of gifts of oriental kings is remembered in the celebration of Epiphany on 6th January. Thus people used to make gifts for the children on 6 January.

In Italy, the festival of epiphany has been linked to an older Roman tradition, when it was believed that a witch riding on a broom brings gifts for the children. The image of the old witch called Befana was linked to the festival of Epiphany on 6th January. Similarly, northern European countries had the old tradition of an old man riding on a reindeer sledge, over time that was also linked to Christmas.

Old Italians tell that when they were young, they used to receive gifts brought by "Befana" only for epiphany on 6 January, but slowly over the last fifty years, the figure of Christmas father "Santa Claus" has become more popular and everyone has adopted the northern custom of gifts brought by Santa Claus on the Christmas day.

The nativity scenes have 3 main characters - Joseph (the father) usually shown with a stick in his hand, Mary (the mother) and Jesu (the new born baby). 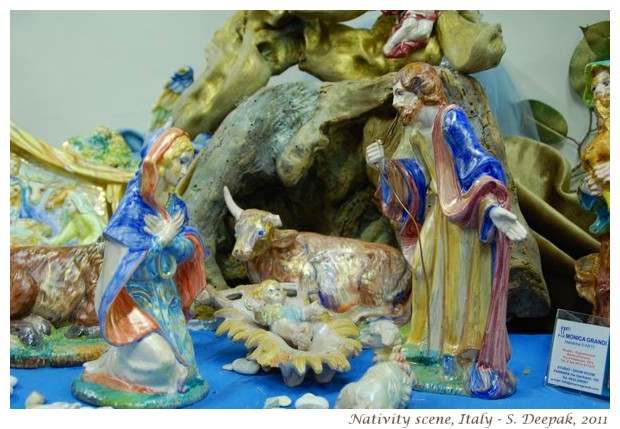 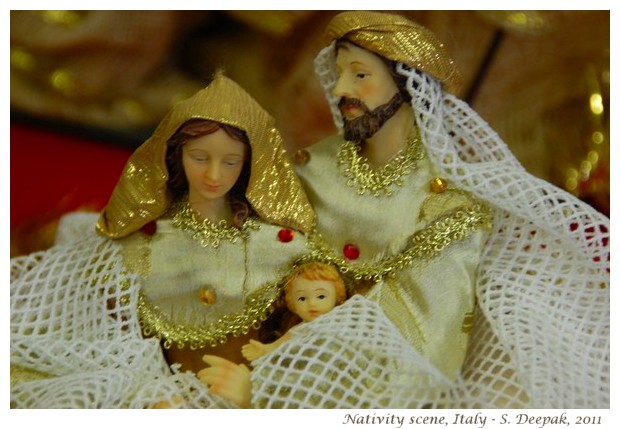 There are four other important characters of the nativity scene - an angle and the three kings who came from orient. 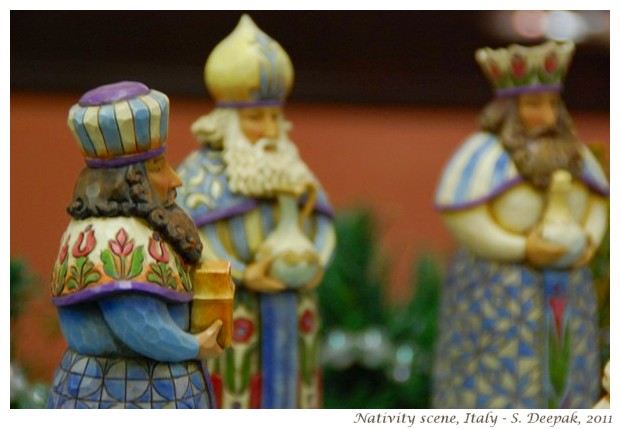 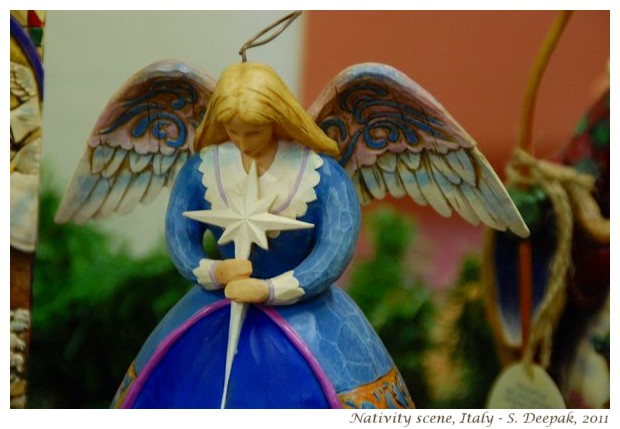 Frequently, to these, people add in their nativity scenes, some farm animals such as cows, sheep, donkeys, etc. Finally, some persons also try to show scenes of normal life around the nativity scenes, as you can see in the next pictures. 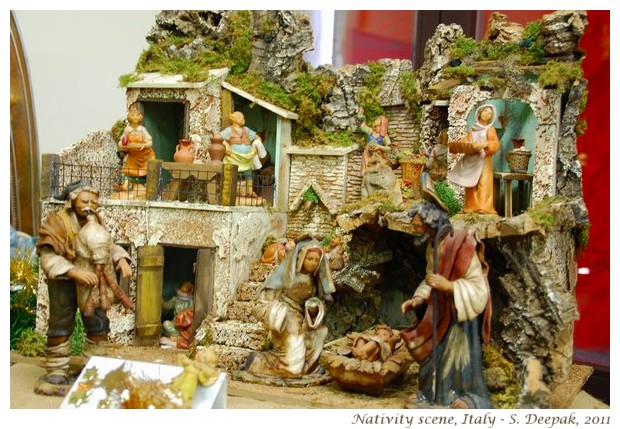 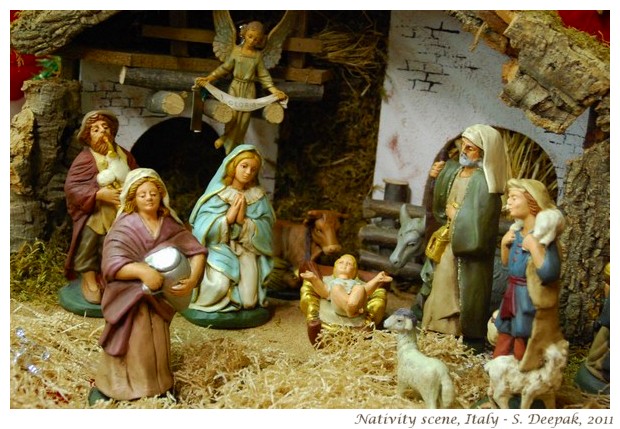 People also like to show their individuality by choosing different styles of clothes and statues. For example, in the next picture you can see that one of the oriental "kings" wearing a brown gown is a woman. 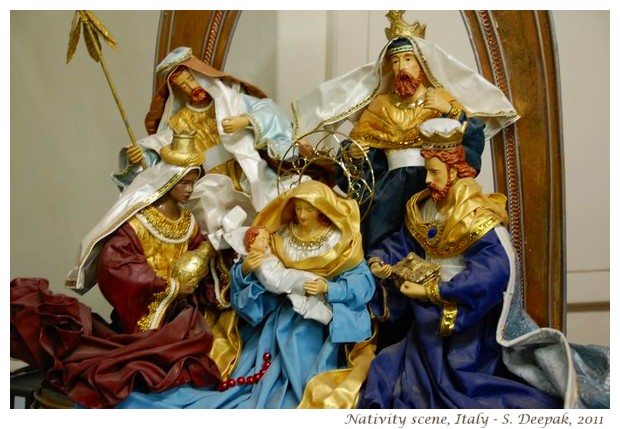 Here are some examples of some naitivity scenes that I liked from 2011: 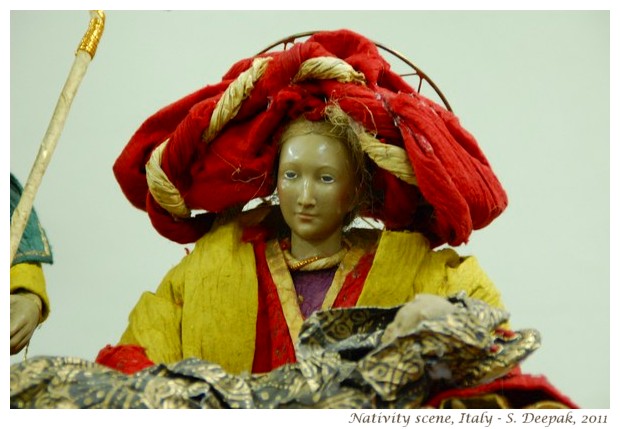 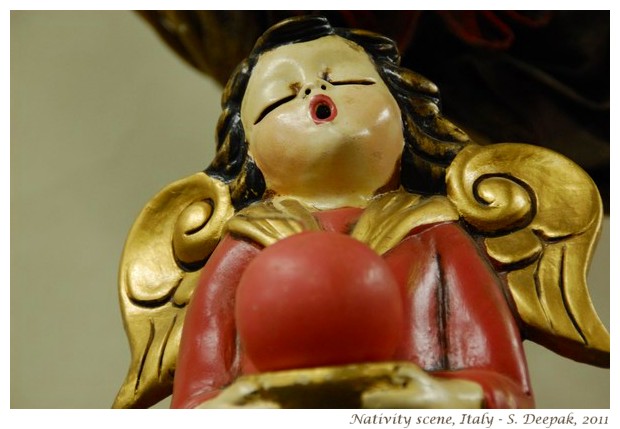 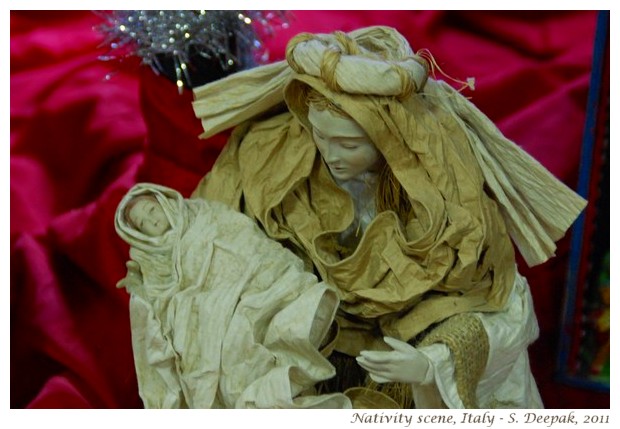 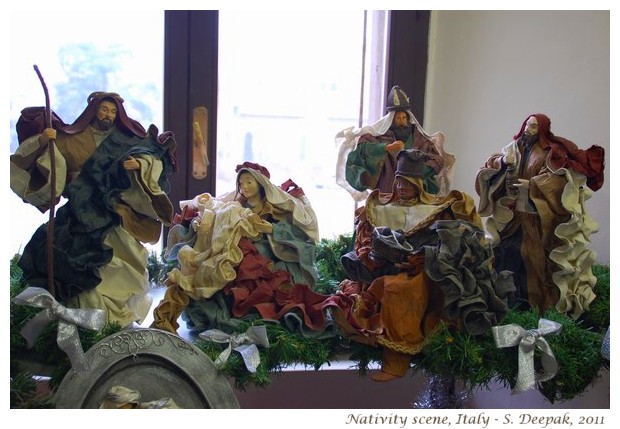 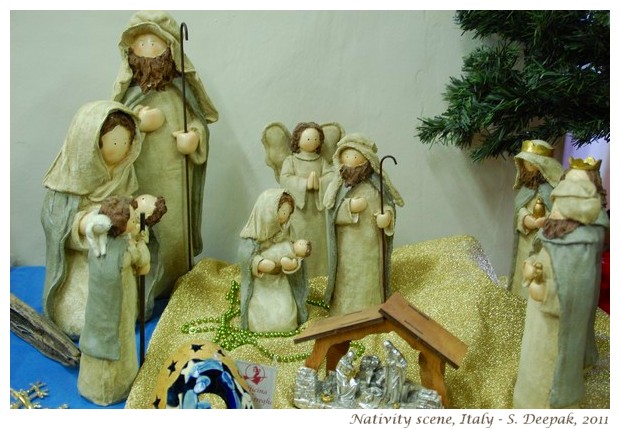 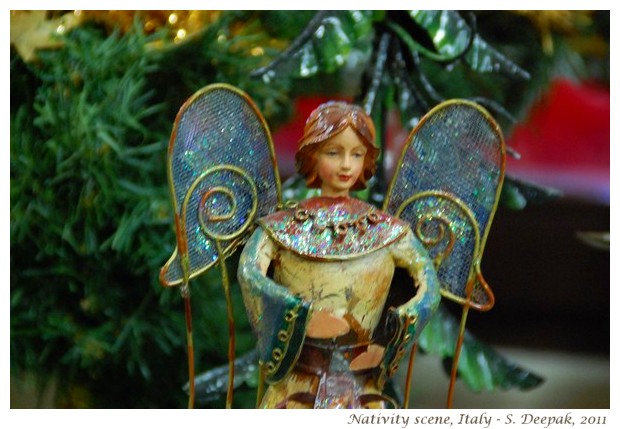 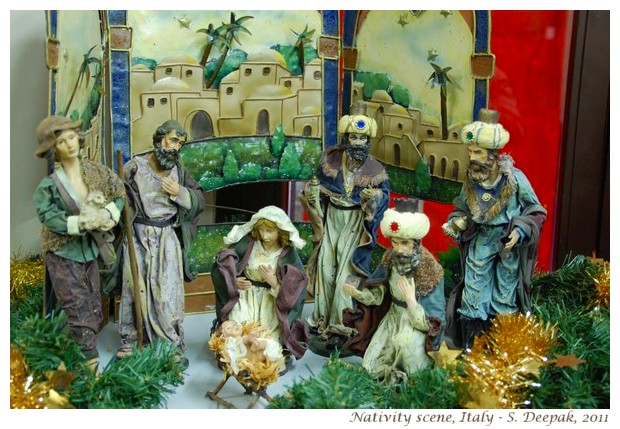 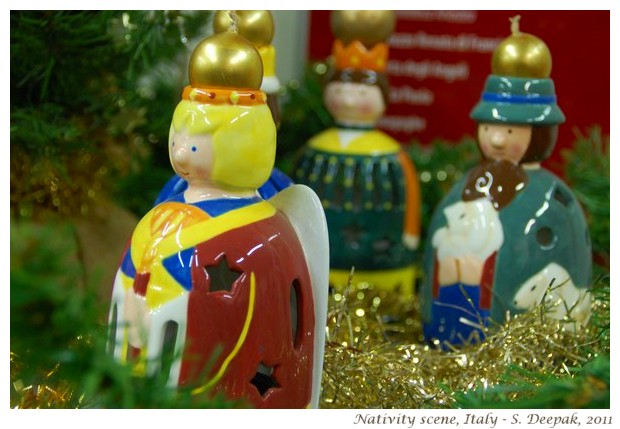 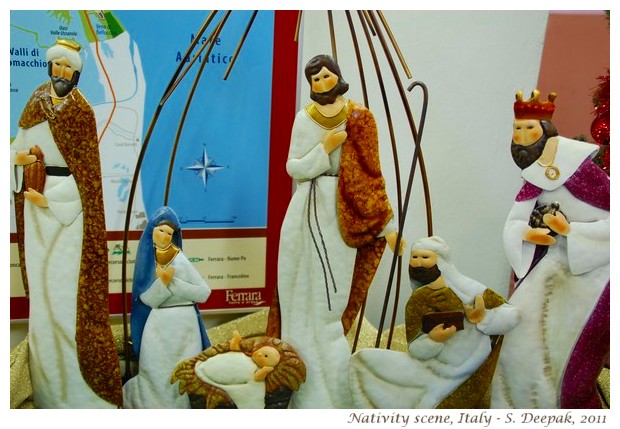 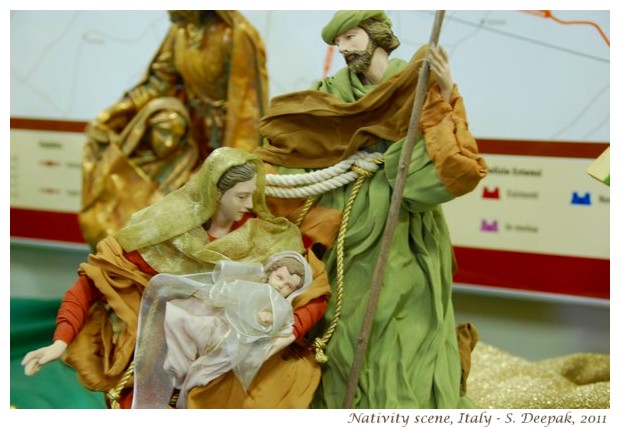 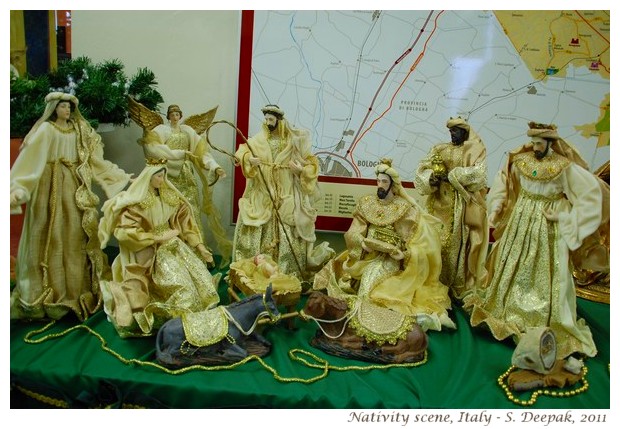 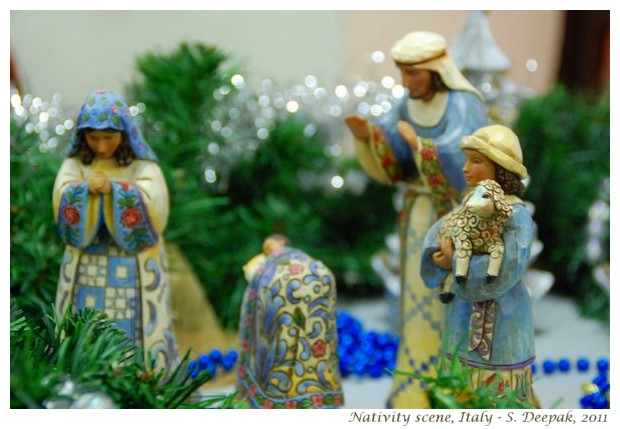 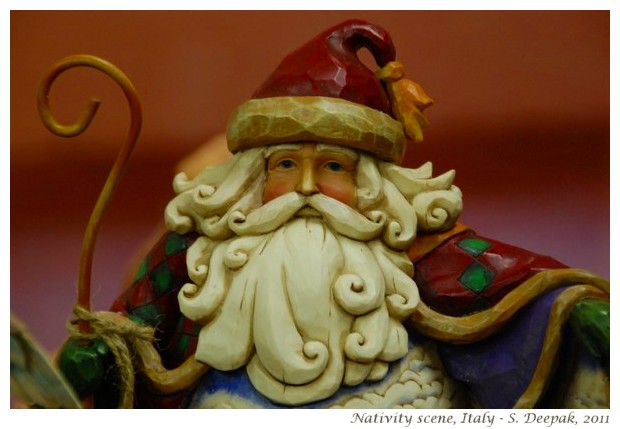 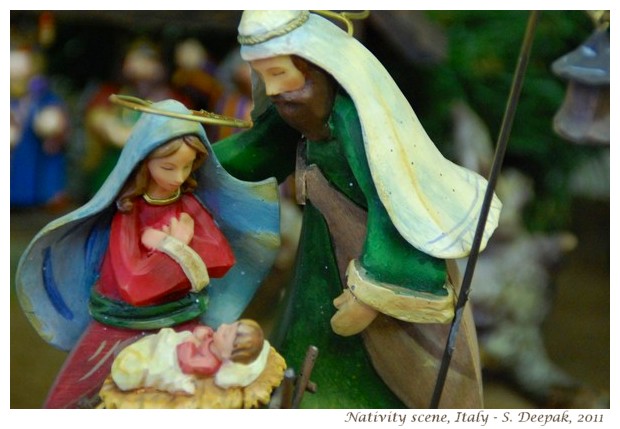 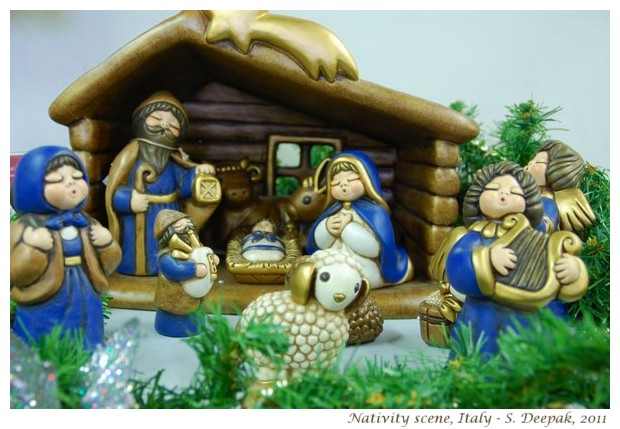 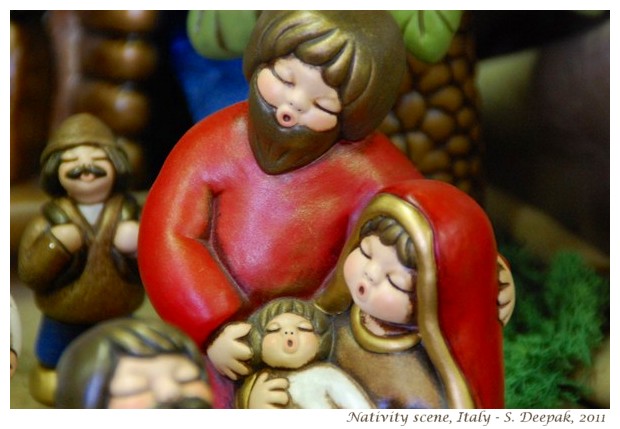 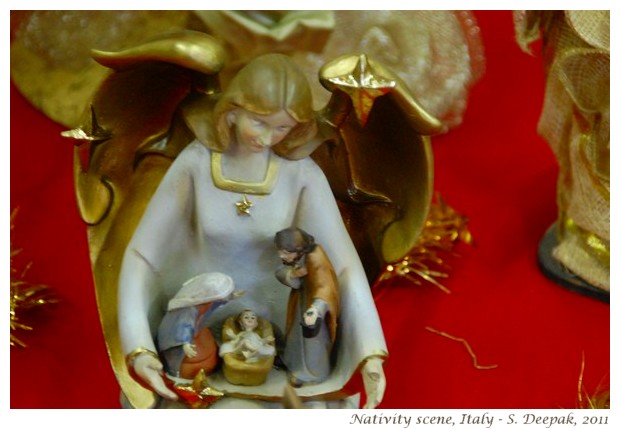 So did you like my selection of best nativity scenes from 2011 from Italy? Which one do you like most? My personal favourite is crib in the last picture, it is simple with the angle holding the main characters of the story in her arm.
***
This post was originally written in 2011
Posted by Sunil Deepak at 11:45