An evening on a Delhi street

We were in Connaught Place in Delhi, on the road that has the emporiums selling handicrafts and clothes from different parts of India. That afternoon gave me an opportunity to inadvertently experience being a "homeless old man" for a few hours, surrounded by people who spend large parts of their lives on the street. This post is about that experience.

My sister and nieces were going to visit some of those state emporiums, looking for new clothes for a family wedding. Shopping, especially of clothes, means looking at tens or even hundreds of things, discussing about the colours, textures and other details, comparing them with hundred of similar things you saw in the previous store, and in the end telling the sales-person, "Yes, we like these, keep them separately for us, so that we can go to the next store and repeat the whole thing once again and at the end, we may come back here to buy these!" 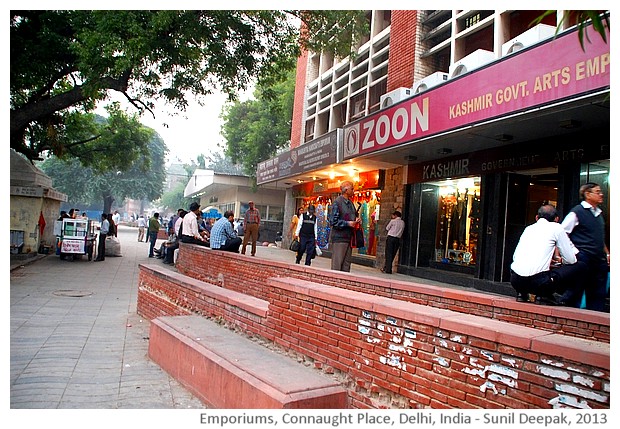 I am not very fond of shopping. I told my sister that while they did their shopping, I would prefer to find some good place to sit and read on my ebook reader.

Soon I found myself looking around for a place to sit. I saw many other persons sitting around, some even trying to sleep. Finally, I took the underground passage and walked to the Hanuman temple across the road. 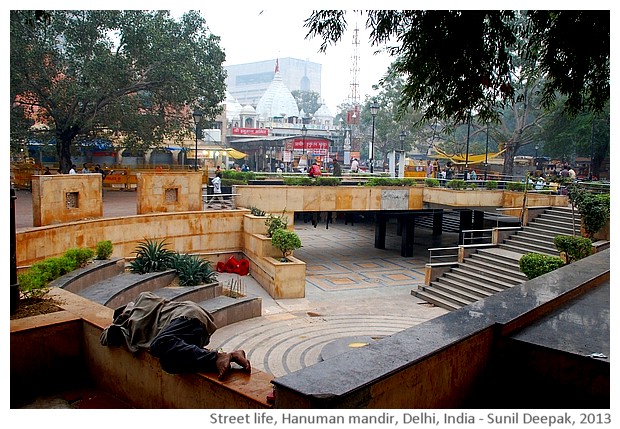 On the stairs that went towards the temple, I brought out my camera from the bag, to click a picture of the temple. An old woman was sitting there with a yellow chunni wrapped around her head. That parapet looked like the right height for my legs, for sitting down and holding my ebook reader. So I decided to sit there, in front of the woman. As I went closer, the old lady raised up her hand to ask for alms. I smiled at her and sat on the other side, putting my bag between my legs. The woman smiled back at me and nodded, accepting my right to sit there. 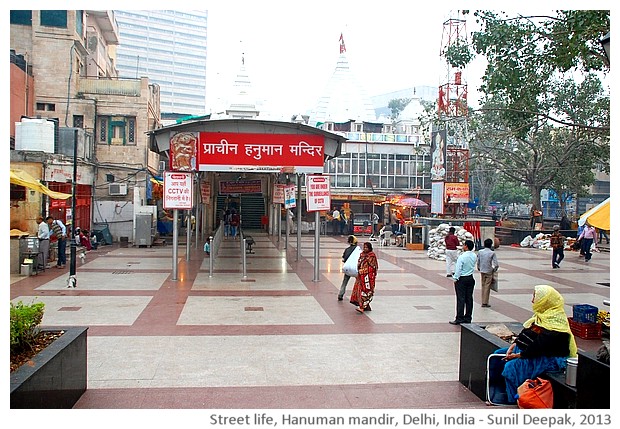 I had yet not taken out my ebook reader and was looking around, when two men arrived near us, holding between them a big vessel. In a few seconds, a queue formed in front of them. The men queueing were unshaven with hollow cheeks, wearing dirty clothes, some of them in tattered clothes. The two men were distributing food for the poor - puris and aloo bhaji.

"Lo baba!" (Take it grandfather), I suddenly found two puris with the potato mix heaped on them, thrust in my hand. Before I could recover from my surprise, the man had already turned towards the old lady.

I was shocked - Those men had thought that I was some homeless beggar waiting for alms like the woman sitting across me?

I tried to look at myself through their eyes - a well fed man with a mop of white hair and white beard, wearing jeans and a kurta. I don't think that I was looking dirty or poor, but probably they had not stopped to look at me properly. May be all the persons sitting there were supposed to be homeless and poor?

People from middle class homes facing bad times, or those living on meagre pensions or those who were turned out by their children, could have been like me - ashamed to acknowledge that they were homeless and hungry, but forced by the circumstances to come out and sit there! Like the woman sitting across from me.

No one took any notice of me. I watched her eating puris and suddenly I felt like crying.

As the food finished, the two men walked away with the empty vessel and the hollow-cheeked men in dirty clothes disappeared as quickly as they had appeared.

As I sat there with those puris in my hand, life went on without any pause. A woman came, rolled out a durrie in front of us and sat down there. People going to the temple, left their shoes and sandals on her durrie and when they came out, they gave her some coins.

Another woman was sitting on the ground on one side, asking for alms from the visitors. A dog came cautiously near her. The woman smiled slowly and gave part of her puris to the dog. He gulped it down and then settled near her, his tail touching her legs.

On one side, some disabled persons were sitting there, their crutches and deformed limbs on exhibition. Some were with signs of leprosy, they were sitting a little away from the rest of the group.

Every now and then, some persons arrived with food or prasad for distribution, and those dirty looking men with hollow cheeks and tattered clothes, came out from where ever they had been hiding and quickly formed the queues.

Finally tired of sitting there, I walked around, stopping to give my puris to the woman with the dog.

Going up the stairs behind the group of disabled persons, there was another square with a few trees. Part of this area was occupied by some persons, mainly women, with low tables and chairs - these were temporary shops for getting henna-tattoo designs on hands and forearms.

After some time, I sat down on a low wall near those henna and tattoo artists. 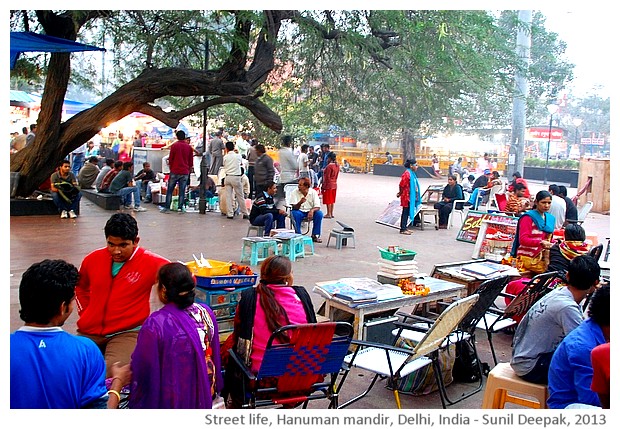 Three palm-readers had their tables and chairs in front of another temple in the left corner. One of them wore the saffron colours of a sadhu. Behind them, on one side a shop advertised horoscopes and future predictions made with a computer. While the palm readers had an occasional client, the computer horoscope shop seemed to have more work. 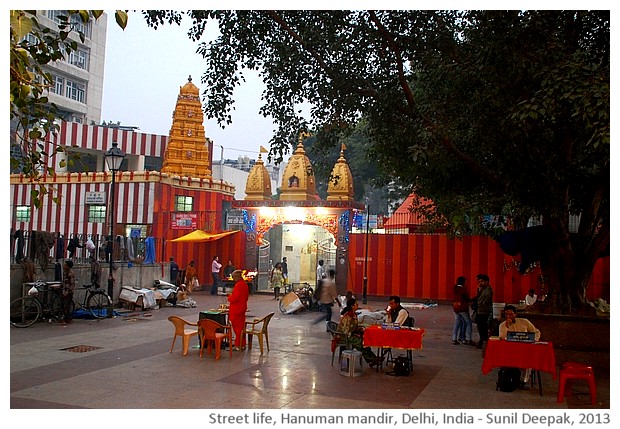 There were many more persons in that space, most of them simply sitting around. Some were next to me on the low wall, others were sitting under the trees. Slowly the evening fell and the lights came on. It became colder. A chaiwala sitting down on the ground and making tea on a stove, was doing brisk business, continuously surrounded by clients.

Suddenly a fight broke out between one of the woman henna-tattoo designers and a young guy. Apparently, the woman was  a veteran, while the young guy had just set up his henna-tattoo business. The woman had glasses with  bright blue and yellow frame, she started shouting, spewing out violent cuss-words, usually used by men. Then she brought out a blade and slashed the guy's shop signboard, cutting it to pieces. The guy sat there cowering with fright, unable to say anything. After some time, the woman went back to her own table and the crowd that had gathered to watch the fight dispersed.

It was as if different parts of that open space were different ecological zones, each with its group of regulars and visitors, each controlled by its own laws. Around them moved the homeless persons, of which I had become a part, persons waiting for something, persons passing time. Finally I got up, feeling old, tired and cold.

As I walked back towards the emporiums, in the underground passage, an evening school had started. Two persons, a guy and a woman, were sitting on stools, with a group of street children in front of them. I sat down at the top of the stairs, watching their class for some time, till the cellphone in my pocket started vibrating. My sister had finished her shopping. 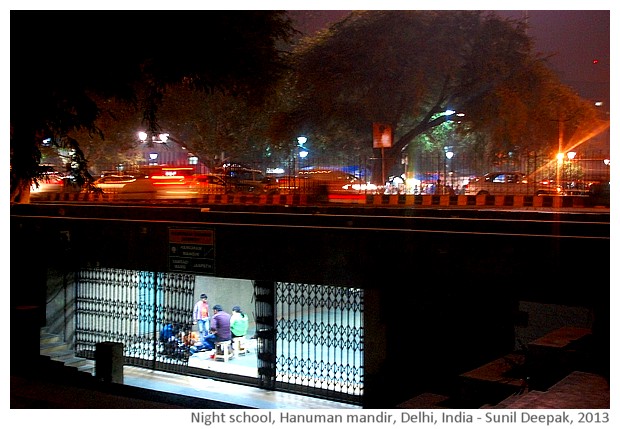 Finally it was time to go home.

I did not take many pictures that day. Looking at them, brings a node to my throat, and I feel old, tired and cold.