The science museum of Bologna (Italy) has an amazing collection of anatomy models created around mid-1700s, and used for teaching to the medical students and obstetricians. I especially love the part of this museum that presents the models of babies in their mothers' wombs. If you ever visit Bologna and you are interested in human anatomy, do not forget to visit this museum. 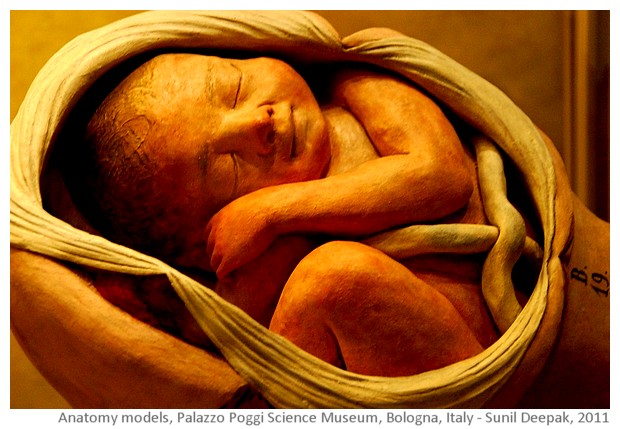 This photo-essay presents some of the anatomical models from The Palazzo Poggi Science Museum of Bologna university.

Origins of anatomy models in Bologna

In 1758 Pope Benedict XIV asked the university of Bologna to establish a school for teaching obstetrics in Palazzo Poggi, that hosted the Bologna university at that time. Dr Giovanni Antonio Galli (1708-1782) was the first professor of obstetrics at this school. Most of the anatomy models displayed in Palazzo Poggi were created during the second half of 1700s by anatomy artists like Anna Morandi Manzolini, Giovanni Manzolini, Ercole Lelli and Clemente Susini. The models are made mainly in two kinds of materials - cold painted terracotta and wax.

Some of the first obstetrics models showing babies in the mother's womb were made by Giovanni Manzolini for Prof. Galli. When Giovanni Manzolini died in 1755, Prof. Galli asked his wife Anna Morandi Manzolini (1714-1774), who was also an artist and used to help her husband, to make the models. Majority of obstetrics models displayed in the Palazzo Poggi science museum are by Anna, who did human dissections and was appointed as the professor of anatomy.

Ercole Lelli (1702-1766) was a well known painter and anatomy modeller. His speciality was wax models of human bodies showing the bones and the muscles. Finally Clemente Susini (1754-1814) was another important artist who specialised in preparing wax models showing the different organs.

Let us start this virtual tour with a terracotta representation of Prof. Galli teaching to obstetricians. It shows both a pregnant woman as well as an anatomical model used for teaching. However, in reality only models were used for teaching and actual people were not brought in the theory classes. 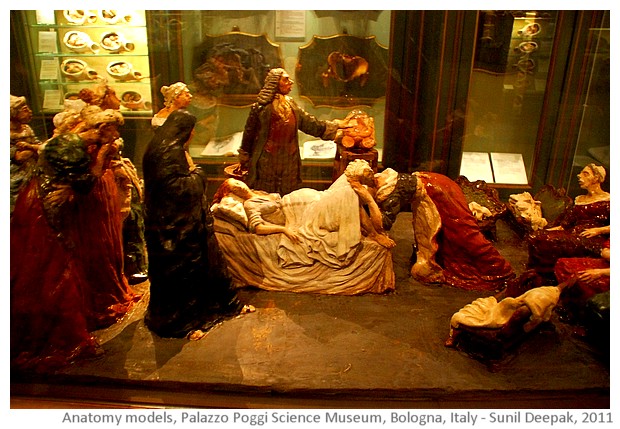 When I had studied medicine in Delhi (India), we did not have any such models. Though I had studied human anatomy and obstetrics, most of our learnings were through looking at few diagrams and imagining the human body.

Today, the 3D computer-based models are common and are a wonderful learning tool. Some time ago, during a free online Coursera course on the anatomy of the upper limb, I had tried learning through virtual 3D models and they were wonderful!

Even comparing with the quality of virtual 3D models, I think that the terracotta models shown below are absolutely amazing. 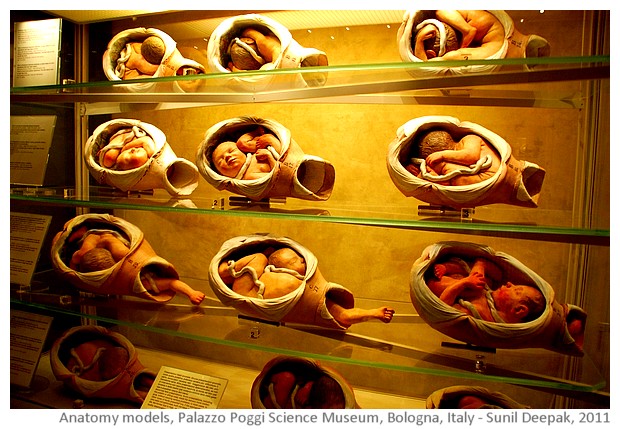 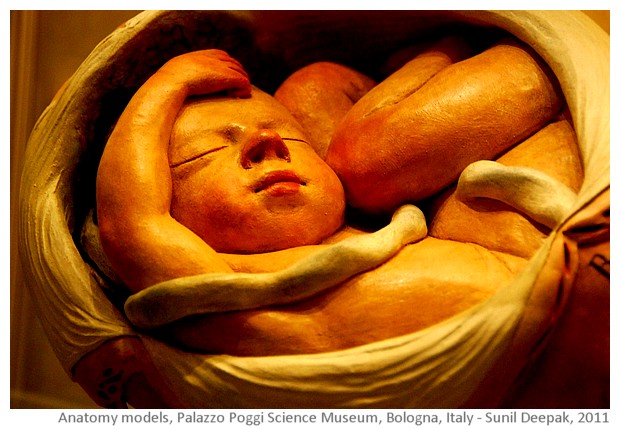 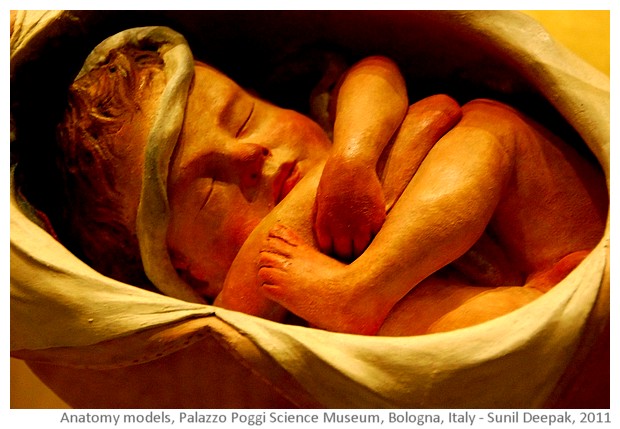 During the pregnancy, the baby keeps on moving in different positions in the womb. Only when it is close to the delivery time, baby takes the position for the delivery. In most cases, the baby's head goes inside the birth canal and the opening of the uterus begins to dilate. Some of the possible positions for a head-first delivery are shown in the image below (though in these models, the head is still not engaged inside the birth canal): 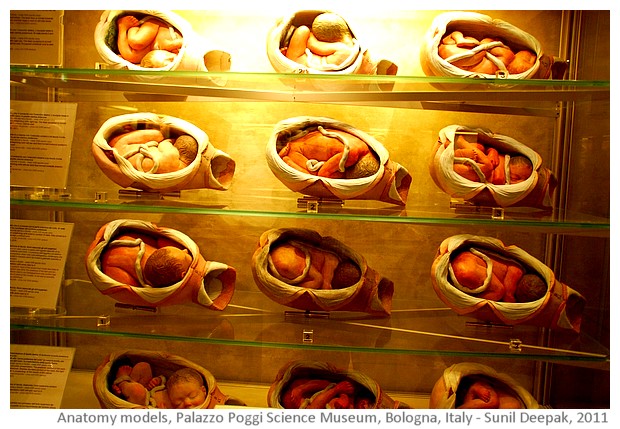 Some times, instead of the head, baby's butt or the feet come out first - it can mean a more difficult delivery, especially if it is a first baby. Some of the positions for butt or feet first delivery are shown in the following models:

Inside the uterus, the baby is closed inside a membrane filled with liquid - the amniotic sack and the amniotic liquid, while the umbilical cord connects the baby to the placenta on the uterine wall as shown in the next models. 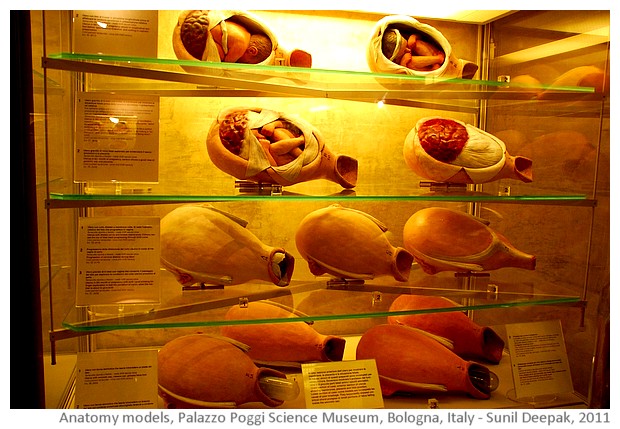 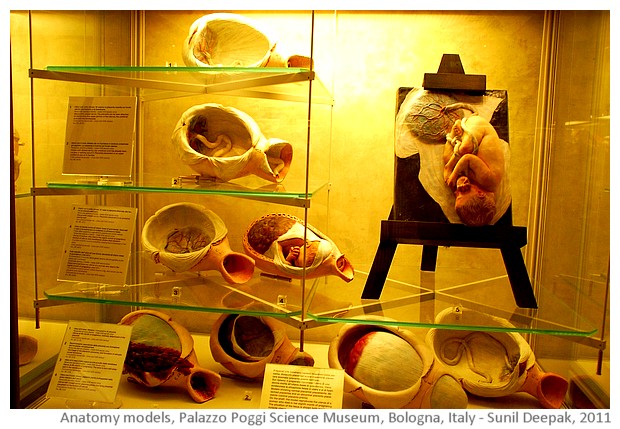 How do twin babies grow inside the uterus is another fascinating area of study, and are shown in the next images. 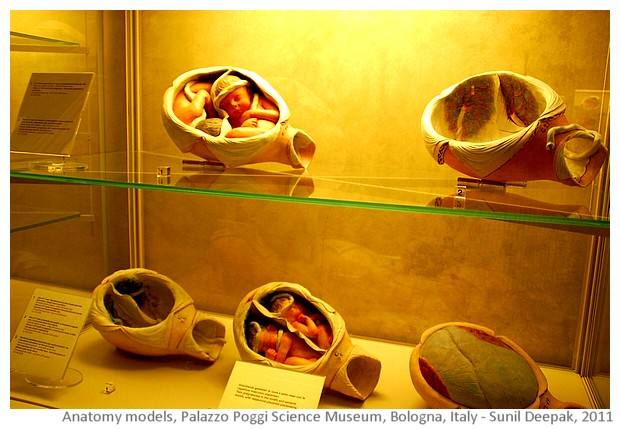 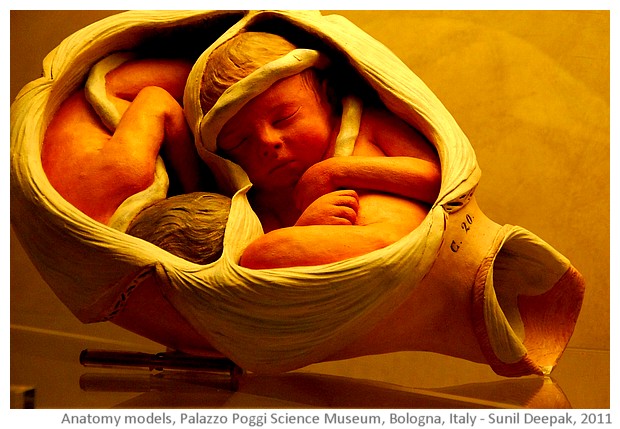 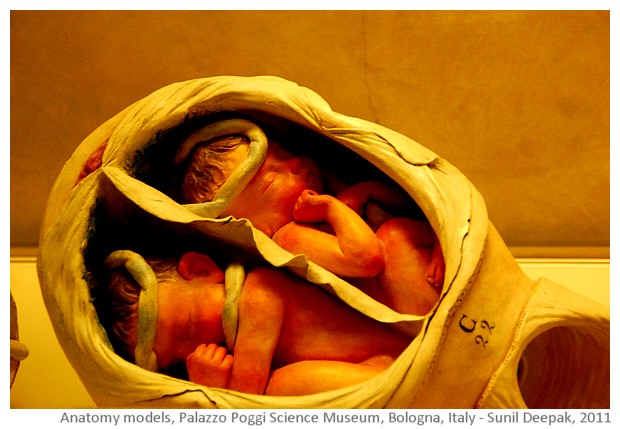 Most child-births are fairly straight-forward affairs, and women are known to have delivered even alone. However some times there can be complications. Thus regular check-ups during the pregnancy and the presence of a trained obstetrician or a trained traditional birth attendant is important during the child-birth.

Some countries in Africa and South Asia, including India, continue to have high mortality rates for the mothers and the new born babies. Urban areas in India have highly privatised health services with extremely high rates of Cesarean sections. On the other hand, services in rural areas and for the urban poor are lacking or are of poor quality. Reducing mortality of mothers and new born babies is one of the Millennium Development Goals - unfortunately, the progress for reaching this goal has not been sufficient.

The next image shows models depicting some complications during deliveries - intervention for removing placenta (normally placenta separates automatically after the child birth and comes out, but sometimes, it may need to be removed) and the rupture of the uterus. 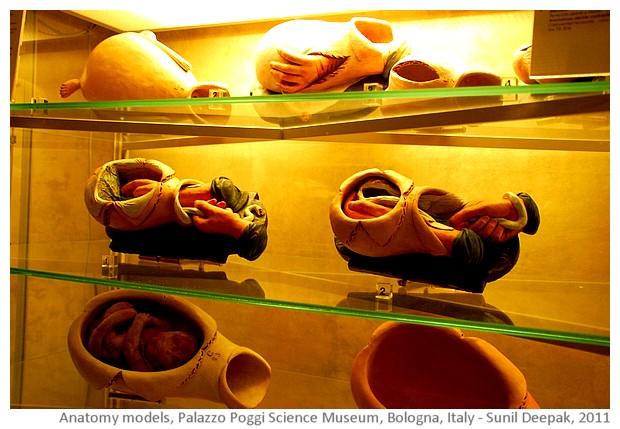 Unfortunately in countries like India and China, ultra-sound test may also be used for sex-determination and abortion of female foetuses.

The next image shows the wax models explaining the different positions of placenta inside the uterus. 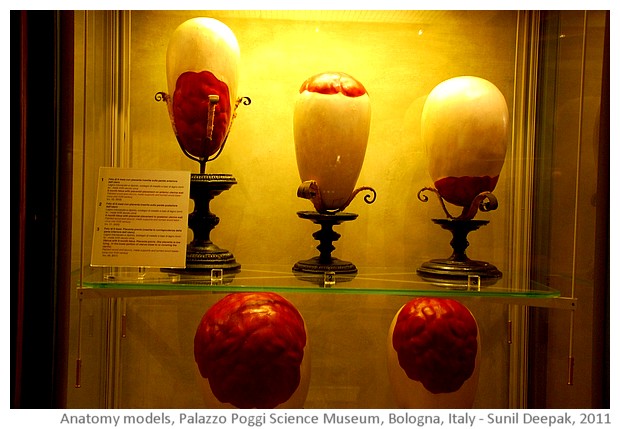 The anatomy museum also has the wax models of Ercole Lelli showing the human bodies, especially the bones and muscles. There are both male and female models, that show the different layers of skin, tissues, muscles and bones in the human body. These make learning of human anatomy such as the functions of individual muscles in moving different joints, so much simpler. 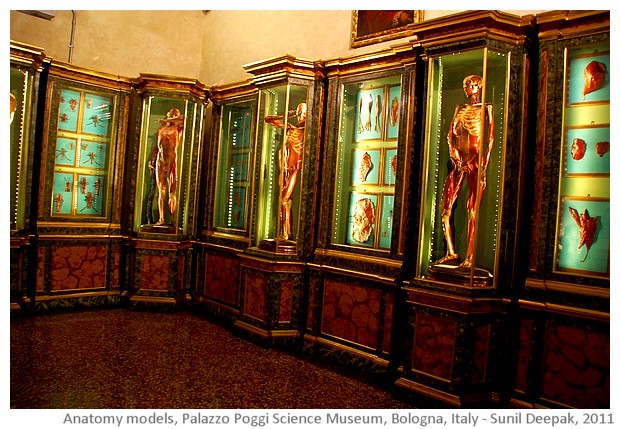 The Venerina of Clemente Susini

Clemente Susini had specialised in the models showing different organs of the body, important for understanding of human anatomy and physiology. One of his most famous creations is the model of a pregnant woman, where you can remove different layers of skin and muscles to look inside different organs, and to take out individual organs to study them. 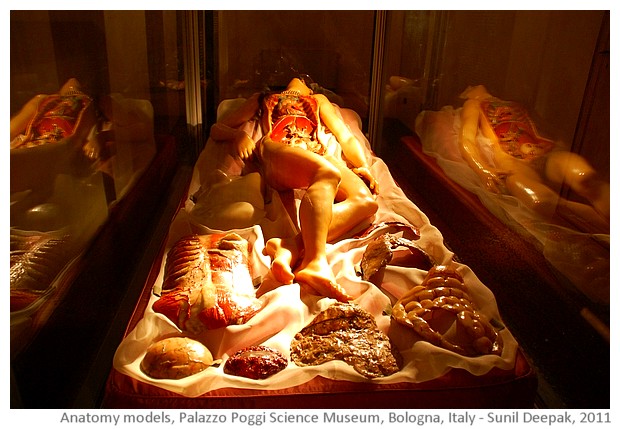 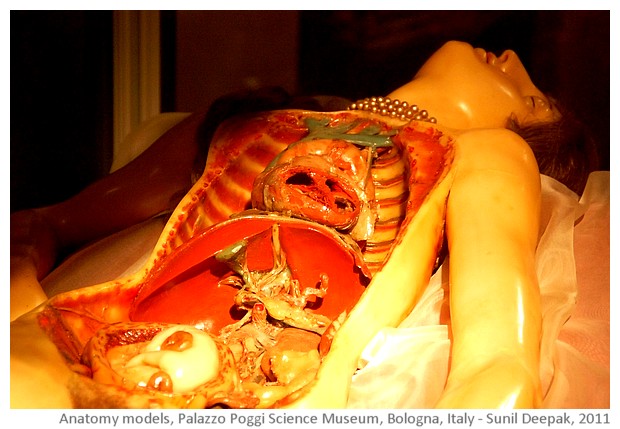 Every time I visit the anatomy museum of Palazzo Poggi, I wish that we had access to such models when we were studying medicine. Even if you are not a doctor, I think that such models are interesting because they help us to understand our bodies better.

Palazzo Poggi museum has different sections including astronomy, physics, geology, natural history, boats and war-strategy. In this post I have limited myself to the anatomy models, but other sections of the museum are also very interesting. It is a 14th century building with some truly wonderful frescoes. If you are planning a visit to Bologna, do not forget to visit this beautiful museum!