Norwegian documentary film When Bubbles Burst (Når boblene brister) by director Hans Petter Moland is about a small town called Vik in Norway that loses its investments, and about their efforts to understand the workings of global economy that led to it. If you are a small investor or a person suffering the impact of global economic crisis, watch this film to understand the issues and to put pressure on your Governments to regulate the banking and financial sectors. 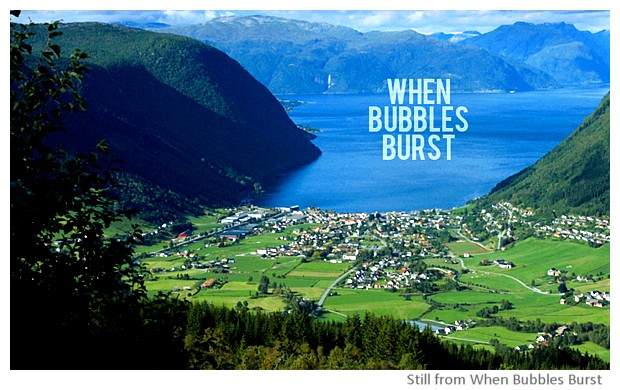 "When Bubbles Burst" will be a part of the International Documentary Film Festival "Mondovisioni" to be held at cinema Kinodromo in Bologna between January to April 2014.

The global economic crisis has had a crippling impact on the world's economy since 2008. That crisis is not yet over. It has involved countries like Iceland, Greece, Spain, Italy and Ireland. It has resulted in a prolonged period of recession with loss of jobs and closure of factories in different parts of the world.

This crisis was initiated by the crash of American banking systems due to accumulation of bad debts. At that time, there were talks of saving these banks since otherwise the bank-crash would have wiped out the savings of millions of small investors. At the same time, it was said that banking system was rotten with high level of financial speculation, risky investments, junk bonds, and billions of dollars siphoned off in bonuses to the bankers.

At the end Governments had paid millions of dollars' worth of aid to the banks. However, the proposed reforms of the banking system never took place and many of the major international banks continue to behave as if nothing has changed.

For ordinary persons, it is not easy to understand what had happened and what to expect in future. "When the Bubbles Burst" tries to take an in-depth look at the global economic mechanisms to explain this crisis and to pose some future scenarios, by talking to experts like Joseph Stiglitz, Michael Lewis, Jomo Kwame Sundaram and Carlota Perez.

The film starts in the village of Vik in Norway, an idyllic rural community that dreams of building a tunnel and a road to connect to the nearby town. In 2007, the municipality of Vik had invested the funds for building the road and tunnel in Terra Securities, a "triple A guaranteed savings", through the American Citibank group. However, Terra Securities had turned out to be valueless junk bonds based on bad subprime loans and the municipality had lost all the money.

Two persons from Vik, involved in the investment, travel to USA to try to understand what had happened. The whole film is about their meetings with different experts who explain the why and how of the disconnect between the "financial economy" and "real economy", and how the technological progress has provided the foundation on which speculative financial markets can play "casino" with the banks and economies of the whole world. "Financial economy or the speculative investments are needed and necessary", they say, "because they provide the power to new innovations and development, but they have to be regulated. If financial economy becomes 50 to 70 times real economy, then it is not sustainable and leads to a crash."

They also visit Detroit, a symbol of the economic crisis with its closed and abandoned factories, decaying buildings with broken windows, an apocalyptic vision of the future.

The film provides an understanding about the diverse and complex factors that influence the creation of economic bubbles and their crashes. The economic crisis is not yet over - it will last another 7-10 years, one expert says. The closure of the crisis will also require regimentation of the financial sector that is resisting to be regulated in any way. Thus the situation may get even worse before a solution will be found, the film says. 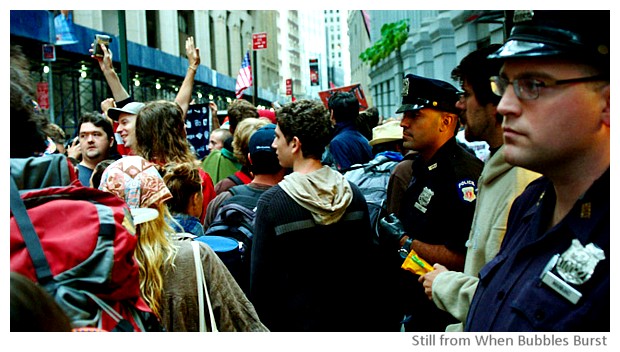 One of the most interesting part of the film is the explanation by Carlota Perez about the cycles of expansion and crash of economic bubbles as essential part of our society. Thus economic crisis are "creative destruction", she says.

This is the fifth cycle of technological advancement and economic crisis in modern era, Perez explains. Each cycle takes us into a new golden age of progress. The first cycle was linked to industrial revolution around 1850. It was followed by progress-crisis cycles linked to railways and steam power development and then to the cheap steel linked development that had led to the wall street crash in 1929, followed by the golden age of progress due to constructions in the suburbs, cars, plastics, appliances and cheap oil after the second world war which led to the economic growth of 1960-80s. It had also led to dismantling of financial markets' regulations by persons like Reagan and Thatcher.

Perez explains that each cycle starts with an installation phase, where a new technology comes with the help of few small investors and slowly gathers steam to expand into a financial bubble, leading to the bubble crash and the crisis. This is followed by a golden age of development that requires use of that technology in transforming the society. Her hypothesis is that green economy could be the future for bringing the golden age following the present crisis. However, it would depend upon upon the initiatives of specific Governments to regulate financial economy and to provide support to the direction of the new developments through appropriate policies.

For the construction-car-oil-appliances cycle USA government under Roosevelt had taken lead by providing appropriate policies. For the new cycle of golden age, the experts seem doubtful if the appropriate policies can come from USA or will take place in another part of the world. Thus, the film ends on a hopeful note of a new and better future.

I found the film fascinating for explaining an area of life that I find difficult to understand and also for the way it explains the links between crisis and development.