In May 2013, I met the Italian sculptor duo, Nicola Zamboni and Sara Bolzani. Nicola believes in art for public spaces rather than art for rich individuals or for museums. Here are some excerpts of our conversation. 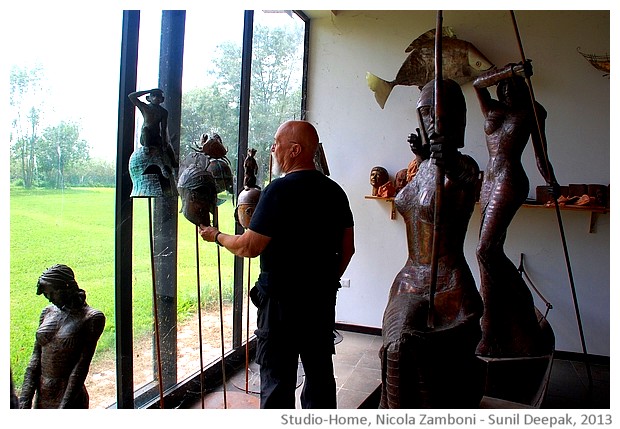 Sunil: Nicola lets start with you. Please tell me about how did you decide to become a sculptor and which experiences shaped you as an artist?

Nicola: From the childhood I was interested in sculpture and painting. My father, who was a factory worker, wanted me to become an accountant, so I did go to the accountancy school, but I was not good at studies. At the time of my final exam, the president of the commission was a person who knew me, said that we shall pass you but you have to promise us two things - one that you will make a bust of Marconi (our school was called named after him) for the school and second, you will never work as an accountant!

Actually I did work briefly as an accountant, but after a few months, the owner told me that it would be better for me to do something else. So I went to the art academy but I did not finish it. During the third year of art college, I went to UK at Henry Moore's house for one month and when I came back to Bologna, I did not want to study any more. At the school we had a good teacher, prof. Ghirmandi, he asked me to become his assistant. Since then I have spent all my life as a sculptor.

Today I find persons who have no preparation or experience, but after 2 days of art work they want to be recognised as artists or sculptors!

Sunil: So you think that formal art training is important for an artist?

Nicola: I think that you need to have talent as an artist but you also need to work hard and practice your skills. With a lot of hard work and discipline, even with little talent you can reach good results. Others can reach good results because they have a lot of talent though they do not have enough discipline. But generally speaking, you need a little talent and a lot of discipline and hard work to be a good artist. 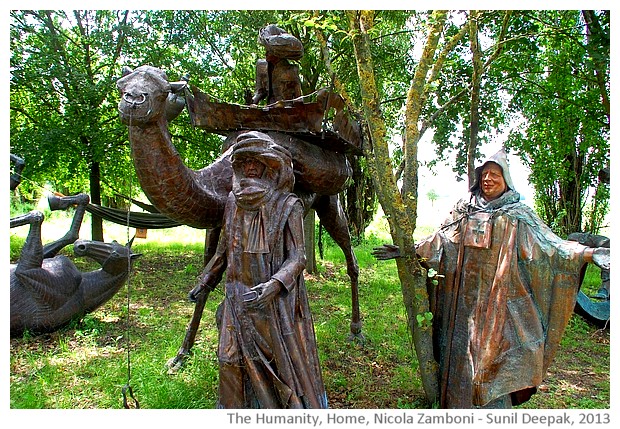 Sunil: I have seen your works in terracotta, stone and metal - which is your favourite material?

Nicola: I like all the different materials, each has its own characteristics that are unique and that you have learn to understand and discover. My desire was to create works that can be displayed in public spaces, especially in spaces of the marginalised people and peripheries, so I always try to adapt my working materials to the economic possibilities of those who can commission my work. I also need to think of the place where the art will be displayed, in selecting the materials. For example, for the sculptures in Parco Pasolini in Pilastro area of Bologna, they did not have lot of money and the work was huge. I was supposed to create sculptures of a long line of persons going to the theatre spread over 500 meters, so I used mostly cement and a little stone. I made persons without faces, without features, who as they reach the theatre acquire features and become full persons. Those sculptures also included a theatre with seats, but 5-6 years ago the municipality decided to cover that part of my work and now it is gone.

Sometimes, vandals can deface your work in public spaces, but usually it is the institutions that suddenly decide to destroy art in public places.

Sunil: Why did you choose to make art for public spaces?

Nicola: I don't like the idea of rich persons keeping my art hidden away where no one looks at it, except may be for their Dobermans, who piss on it regularly in their gardens, and only once in a while some person will look at it. In the big museums, you find all kinds of art works put together, you have to look at them all at one time, one after another. On the other hand, the art, especially sculptures, need to interact with the people and the city spaces, it is part of the city life. Society needs to look at the art and say what do they think of it. Society needs to tell the artist what it appreciates in art, there should be a dialogue between the artist and the city. So every space, every context, needs it own style of art and this is a challenge for the artist - you need to think of the spaces and find artistic idea for that space, rather than having your own style of art that you put up every where.

Sunil: If you look backwards on your works, do you see some kind of evolution?

Nicola: When I had come back to Bologna after staying with Henry Moore, I was in love with him and for some time, all my works resembled his. I feel that we are always influenced by works of others, there is nothing that comes out of no where, you always find inspirations in the life around you and in the works of others. Thus, started a period of experimentation for me. For one year, I asked a construction company to work with them. During that one year, I was using their materials - stones, cement, wood, anything that caught my fancy, and I worked on it. So I got my materials and in exchange they got all my art works and these were put up in different parts of Bologna and San Lazzaro (suburb of Bologna). During that year I felt that contemporary art was not the right style for Bologna - after a few years, the contemporary sculptures do not fit in the city spaces any more. So I turned towards more classical figures for my sculptures. 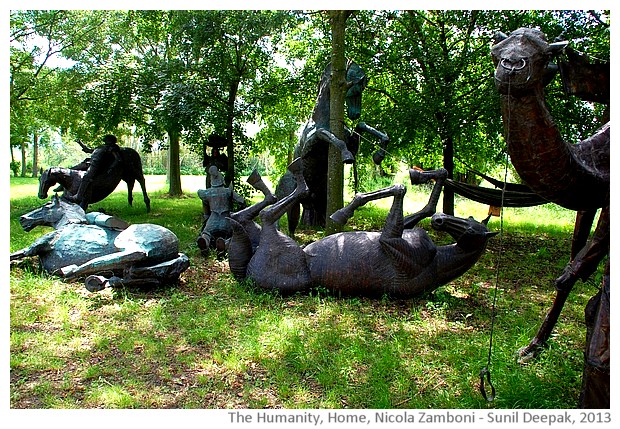 Many of those sculptures in public spaces, are now in a bad condition, but that is the risk of making public works, to be a street artist is not easy for your art. In a museum, your art is safe and people take care of it. Destruction of my art work is part of their life cycles. I accept it. However when institutions, deliberately destroy my art, that hurts me. In Via Larga in Bologna, near the mall, I had built about 120 sculptures. There were sculptures of some well known people among them. However, some 7-8 years ago, they destroyed all of them and that hurt me. Only some pictures remain of that monumental work.

Sunil: Among all your works, do you feel especially close to some specific work?

Nicola: The group of bronze sculptures that I am making now with Sara, "The Humanity" that is very close to my heart. It is an allegory for modern times. It has figures of those who are killing others, destroying things, destroying their animals. It also has those who are trying to run away, to escape with their miserly belongings and their dreams.

Sunil: When I had seen the exhibition of "The Humanity", I had thought that it represented a medieval war.

Nicola: It is an allegory about modern times but I chose medieval style for its representation since warriors with their medieval dresses and armors express strongly the differences between those who kill and the other simple persons. If I had made them with modern clothes, it was more difficult to express this concept. These persons hide their faces behind armors, masks and shields, so that they are no longer persons, but they turn into things. That mask and armor can mean a bank account, some secret group, some power - so those sculptures are not about a medieval war, rather medieval war is a symbolism for what is happening in the world today.

Like there are the animals in those sculptures, they have been pulled into this war, and they are also the unfortunate victims of this war. To show all this, I decided to express myself through an allegory. It is not only men who are destroyers, there also some women also, dressed as warriors in this work.

Sunil: And the women covered with veils where you can see only their eyes?

Sara: They are part of the victims, those who are trying to escape this war, the refugees.

Nicola: Once we went for holidays at a seaside resort in the middle east. There were American and German women who were walking around in bikini and then there were local women, covered from head to feet.

Sara: These two very contrasting ways of dressing brought together in one place, it was a strange and powerful sight. A very strange kind of fashion show.

Nicola: I liked it very much, this contrasting visual, though I must say that I believe in the freedom of choice, that people must be able to choose what they wish to wear. At the same time, I think that it is worse when people forget their customs and become homogenized. For example on the TV to see the leader of China dressed exactly like the leader of USA or France, that seems so strange to me! 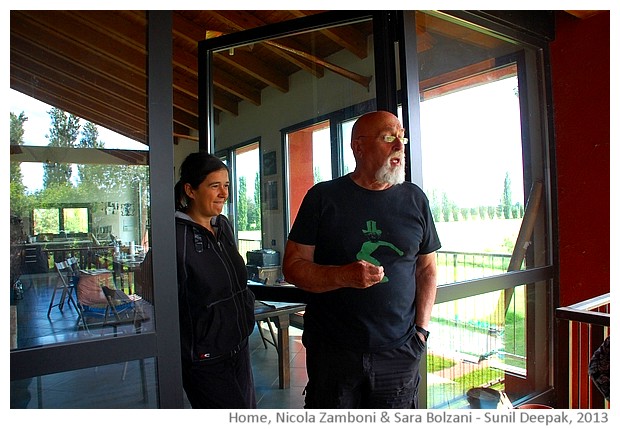 Sara: Even in Africa, where traditions are lost and a lot of persons dress like westerners, though fortunately there are some people who still wear their traditional dresses.

Nicola: There are some paintings from Venice from the 15th century, where you can see persons from different parts of the world - the Arabs, the Jews, the Indians, each with their own way of dressing. It is so beautiful. I think that differences of costumes is a beautiful richness of our humanity, providing that people have a choice in deciding what they wish to wear and are not forced to do it in a certain way.

Sunil: This opera "The Humanity" how do you see it, already complete or you still making new sculptures for it?

Nicola: As long as I will have strength in my body, I will keep on making new sculptures to add to the Humanity. However, now I want to focus only on making the sculptures of persons who are the victims of this war, who are trying to run away to save their lives and livelihoods. These sculptures of "The Humanity" have already been to four exhibitions - first in Modena, then in Arezzo, then in Accursio palace in Bologna, then in Piazza dell'Unità in Bologna.